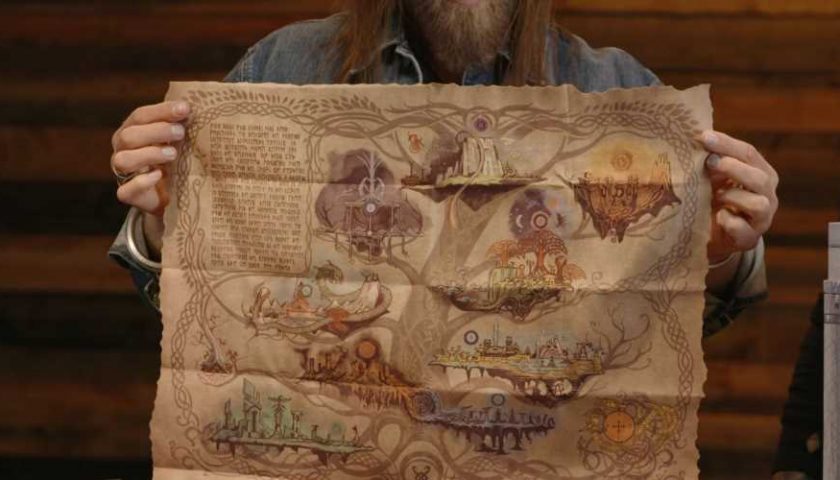 The map included in the God of War Ragnarok Jötnar edition has given fans a first look at the game's interpretation of the Nine Realms.

In Kratos and Atreus' first adventure, players were told all about the Nine Realms but were only able to visit just over half of them, including Alfheim, Helheim, Jotunheim, Muspelheim, Niflheim, and, of course, Midgard. Three of the realms, Vanaheim, Svartalfheim, and Asgard, were all closed off from the player in the first game, but it's been confirmed that we'll get to visit them for the first time in Ragnarok.

Last week, Sony Santa Monica showed off the Collector and Jötnar editions of God of War Ragnarok, including detailing all of the items shown inside, including a steelbook that has already been translated. Exclusive to the Jötnar edition is a Yggdrasil cloth map, which, as reported by GamesRadar, shows all of the nine realms for the first time and gives a little hint as to what to expect from the new areas.

Each section of the map contains little hints for each realm, including what looks like the Bifrost shooting up in the sky in Asgard, a fiery figure stood in Muspelheim that some are speculating could be Surtur, and even the dragon Niddhog in the corner of the map. You can even see Noatun, a seaside hut in Vanaheim where Vanir held their meetings.

As for the runes in the top-left corner, it reads, "For Brok And Sindri and their ambitions to become the world's greatest blacksmiths, training in their dwarven home realm was only the beginning of their path. Sure they created wonders like Draupnir and the Cloak of Feathers, but true genius requires a broad education.

It continues, "They sought it out in all nine realms as well as the space in between the great world tree Iggdrasil, besting their previous creations with the hammer Mjolnir and the great Leviathan axe. None save the gods have been able to chart our strange geography but among mortals few can boast the expertise enjoyed by the Huldra brothers whose ability to navigate and traverse the realms rivals".