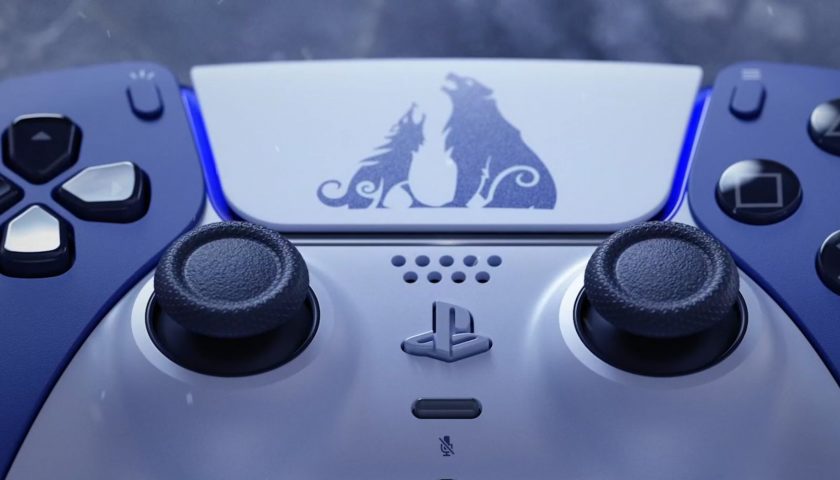 A God of War Ragnarok-themed DualSense has been revealed at the latest State of Play, and it'll be releasing on November 9.

Sony just held its latest State of Play conference, revealing some new projects like Tekken 8 and Rise of the Ronin, alongside giving us some updates on already-announced games, such as Project Eve being renamed Stellar Blade. Although there were some great reveals, by far the highlight of the showcase was God of War Ragnarok, which had a brand new story trailer revealed. Not only that, but there's also a limited edition DualSense on the way.

The DualSense was actually revealed before Ragnarok even had its story trailer, with a brief advert that showed symbols for Hati and Skoll within the ice. As the ice cracked further, it revealed the new DualSense, which has a blue-and-white design and features Hati and Skoll howling at the air on the touchpad.

Alongside revealing the design for the controller, Sony also confirmed a release date for it – November 9, the same day that the full game launches. As of the time of writing, there isn't any information on how much the controller will cost or when pre-orders for it will open, but it'll likely be around the same price as other DualSense controllers that have been released since the PS5's launch.

Interestingly, the God of War Ragnarok DualSense actually marks the first time that Sony has released a limited edition DualSense for any of its games since the PS5's launch. We've had several different waves of colours like purple, red, pink, pastel blue, and even a camouflage one revealed recently, but there's never been one tied to a game like with this Ragnarok release.

If the Ragnarok DualSense doesn't do much for you, Sony also recently revealed the DualSense Edge, its answer to the Xbox Elite controller. No release date or pricing information has been given for that one yet either, but there are clearly a few controller options for PlayStation fans coming in the next few months.