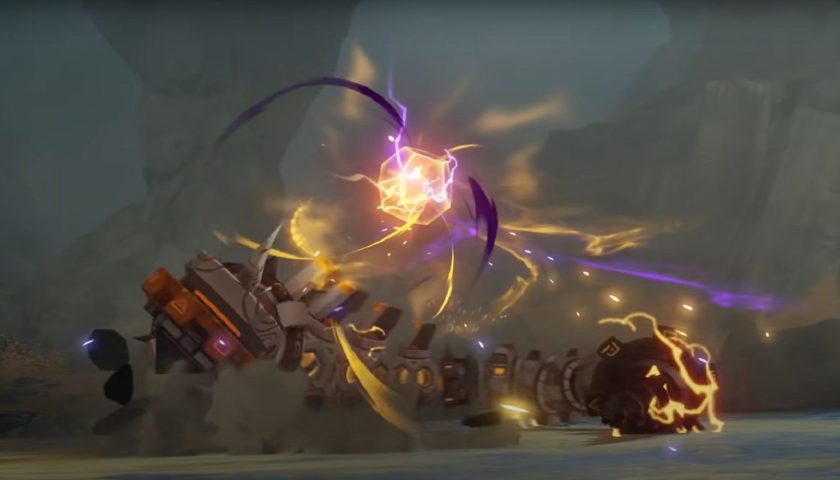 Genshin Impact’s update to Version 2.6 brought with it new quests, new events, and even a new character in Kamisato Ayato. Players should already be having a blast with all these additions, but the highlight of the update is no doubt Liyue’s new explorable area, The Chasm.

This new sub-region has been teased for a long time, but the true depth of The Chasm’s caverns and contents is staggering. Spelunking is scary, though, and as you venture deeper into the abandoned mineshafts, fungi forests, and abyssal ruins, you’re likely to run into more than one novel enemy. The most fearsome of all is the Ruin Serpent boss, but this guide will teach you how to wrangle this mechanical snake. 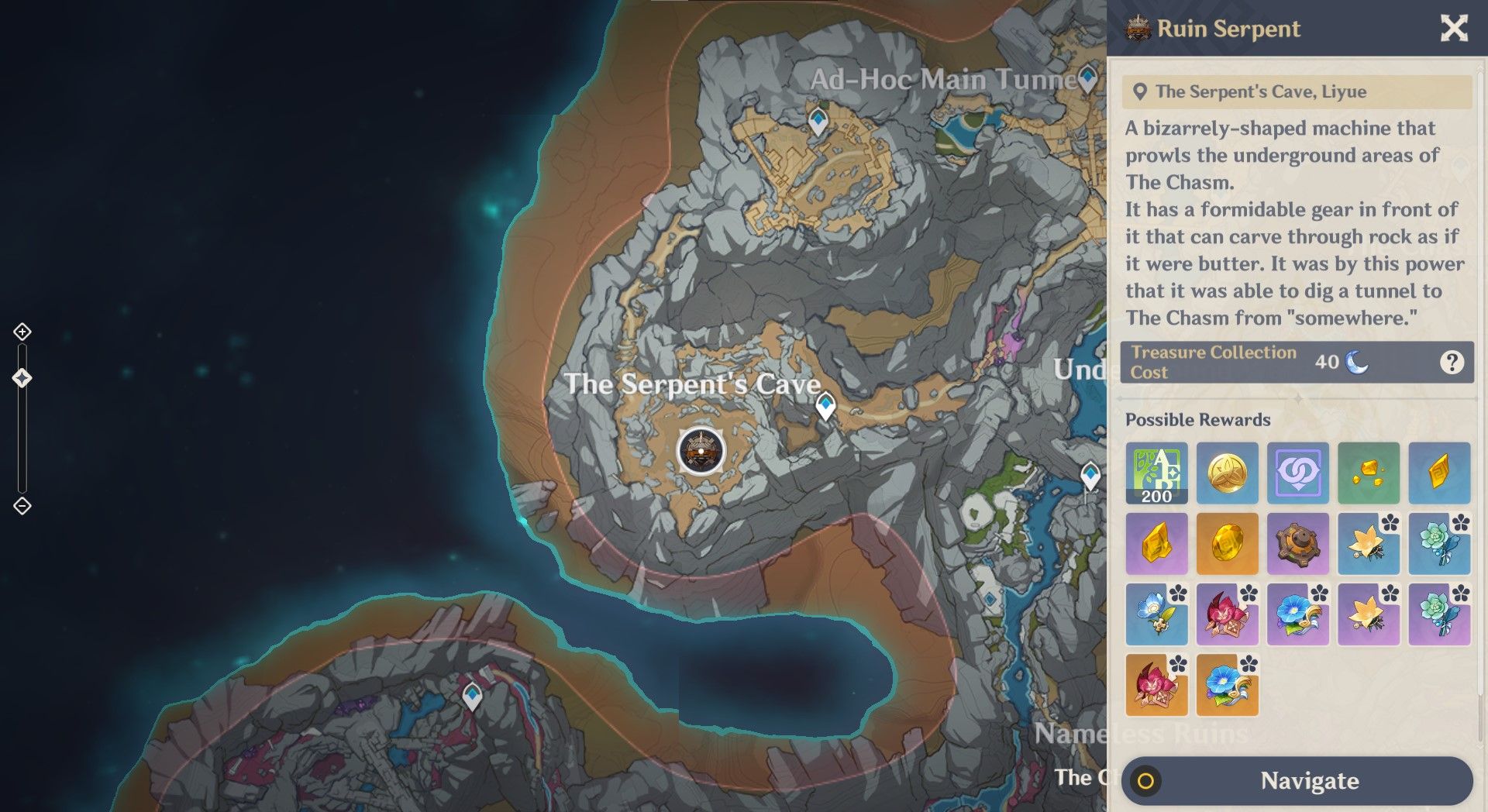 The Ruin Serpent resides in its own area of The Chasm called The Serpent’s Cave. This area is on the west side of the Underground Mines portion of The Chasm, which you can gain access to by completing the Surreptitious Seven-Star Seal Sundering World Quest. This quest is initiated by talking to an NPC named Muning at the entrance of The Chasm, and its progression is pretty straightforward.

As a Normal Boss, the Ruin Serpent can be fought once every few minutes as long as you leave the area to let it respawn. Once defeated, the Ruin Serpent’s rewards, which include Mora, Artifacts, and variants of Prithiva Topaz, can be obtained in exchange for 40 Original Resin. The main reward you’re probably looking for, though, is the Runic Fang, a new Character Ascension Material that will presumably be used for future characters hailing from Liyue. 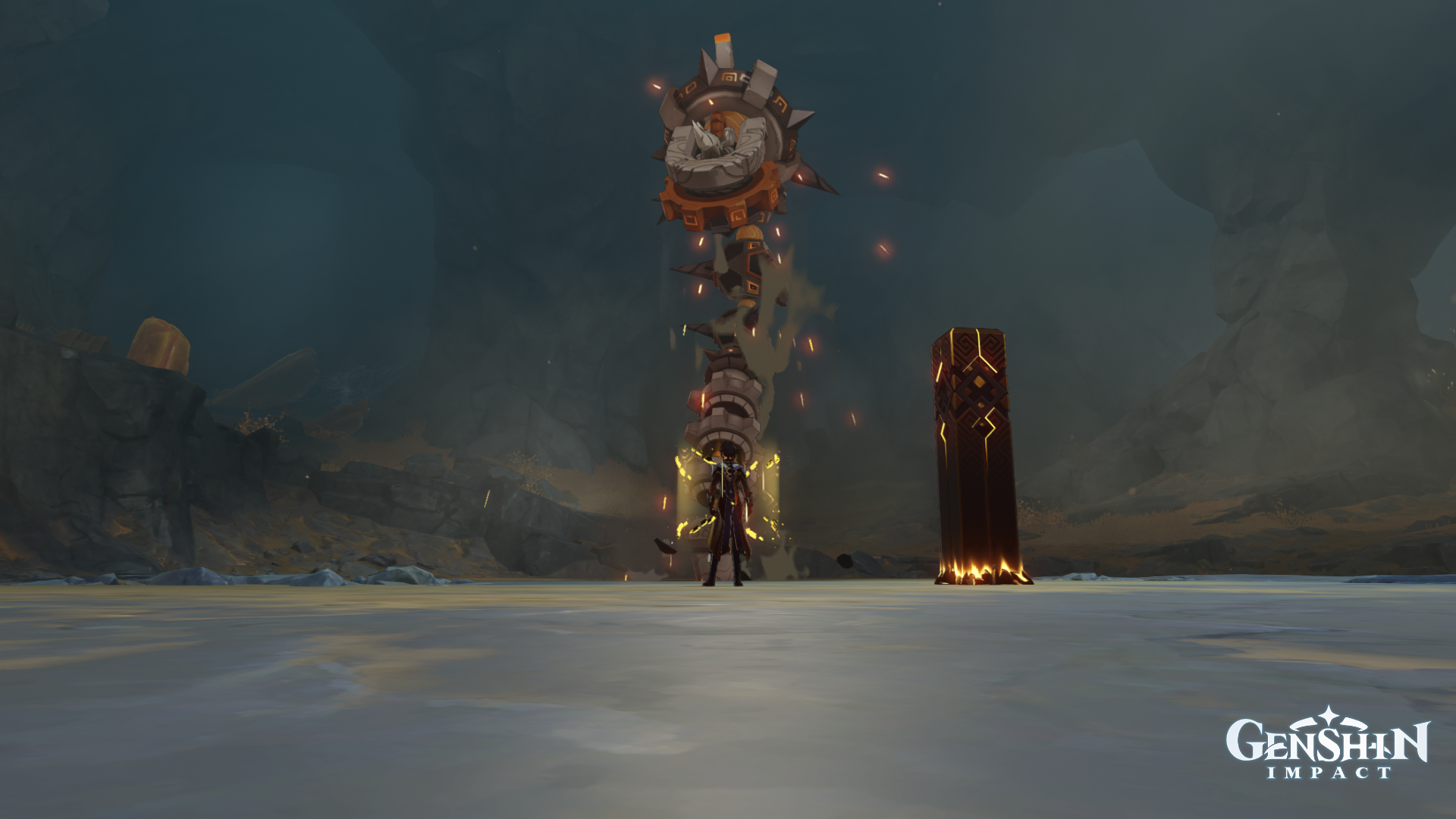 The Ruin Serpent’s overall damage is fairly low compared to some of Genshin Impact’s other bosses, but its sizable health pool and signature mechanics can make the fight drag on if you come unprepared.

When fighting the Ruin Serpent, you’ll want to make sure you have the Lumenstone Adjuvant Gadget equipped. This Gadget is obtained during the “Chasm Spelunkers” World Quest and is essential to stopping some of the Ruin Serpent’s attacks. 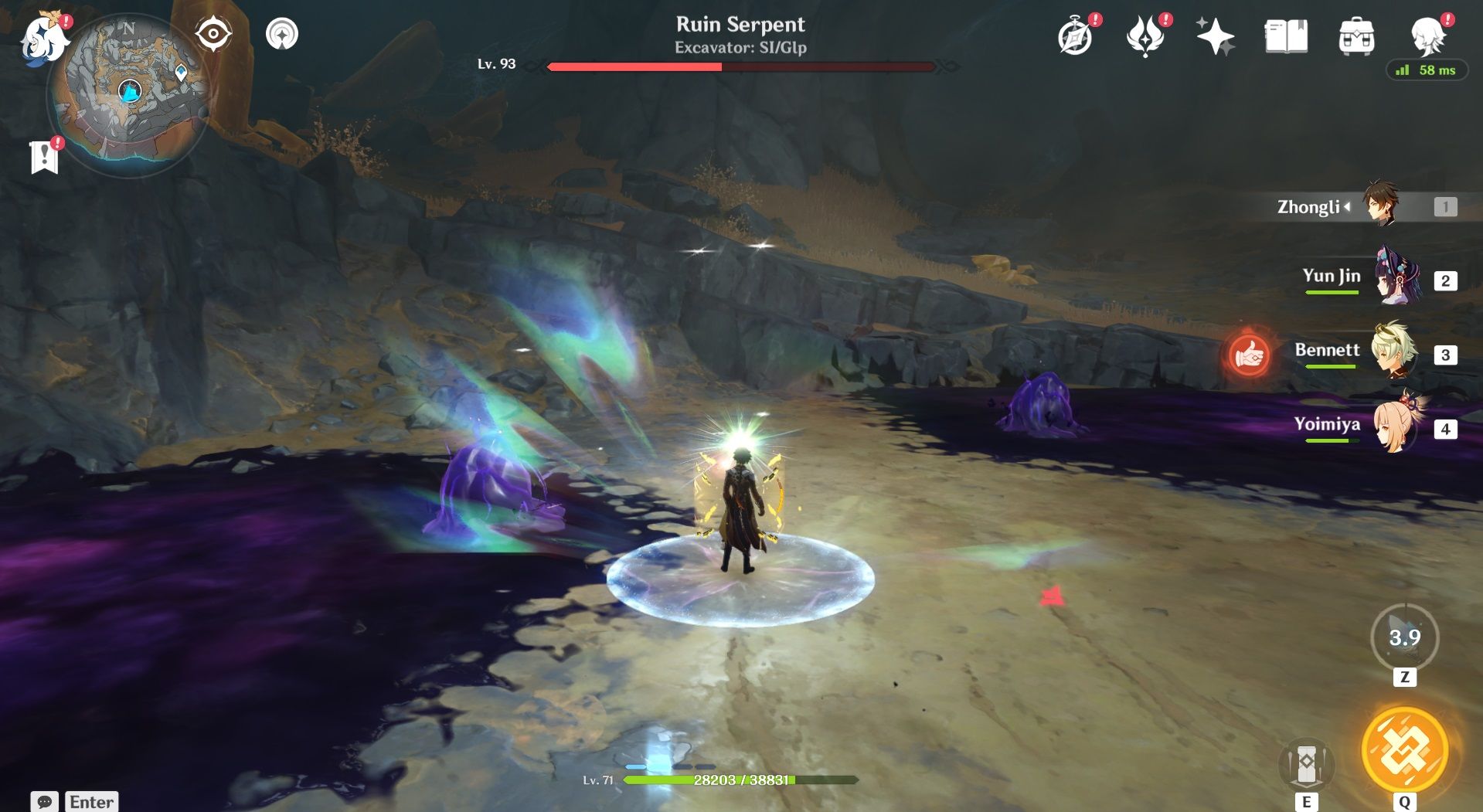 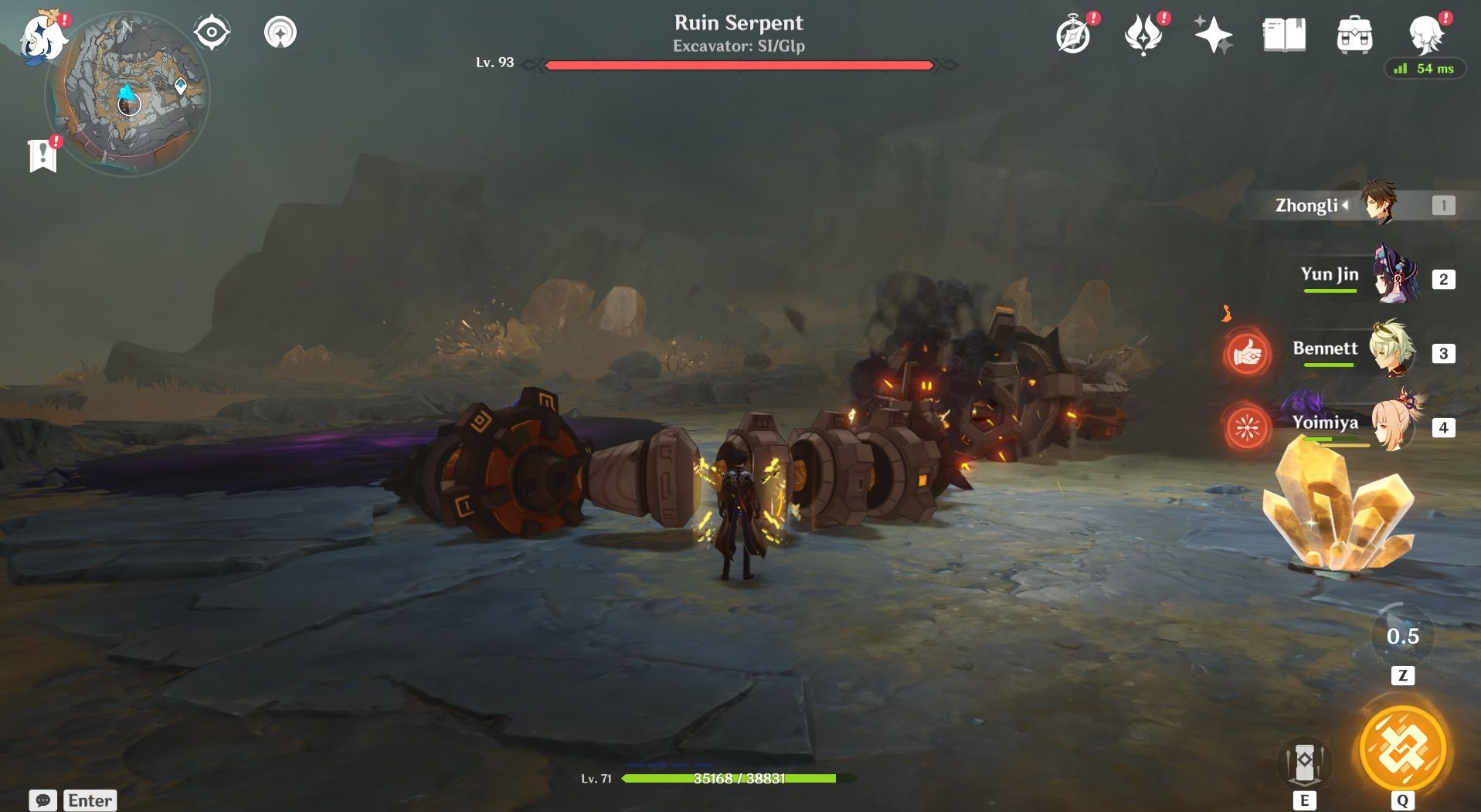 Using the Lumenstone Adjuvant to destroy all the Oozing Concretions that the Ruin Serpent is currently absorbing will paralyze it and render it vulnerable for a short time. This is when you should use your characters’ Bursts and deal as much damage as possible before the Ruin Serpent slithers into the ground again.

The Ruin Serpent can also be paralyzed by hitting four glowing weak points on its body during these two attacks. This is a difficult prospect, but is worth a shot (or four) when you’re out of Lumenstone Adjuvant energy.

The Ruin Serpent has a few other attacks in which it will burrow, roll around, or slam the ground aggressively. Some of these abilities cannot be dodged with your dash’s invincibility-frames, so your best bet is staying outside the range of these attacks altogether.

Finally, the Ruin Serpent sometimes creates a vortex on the ground that will deal continuous damage and draw you towards the center. The Ruin Serpent will eventually emerge from the eye of the vortex and deal significant damage if you’re hit. While this emergence-attack can be dodged individually, the safer option is to immediately sprint out of the vortex and wait until the attack finishes. 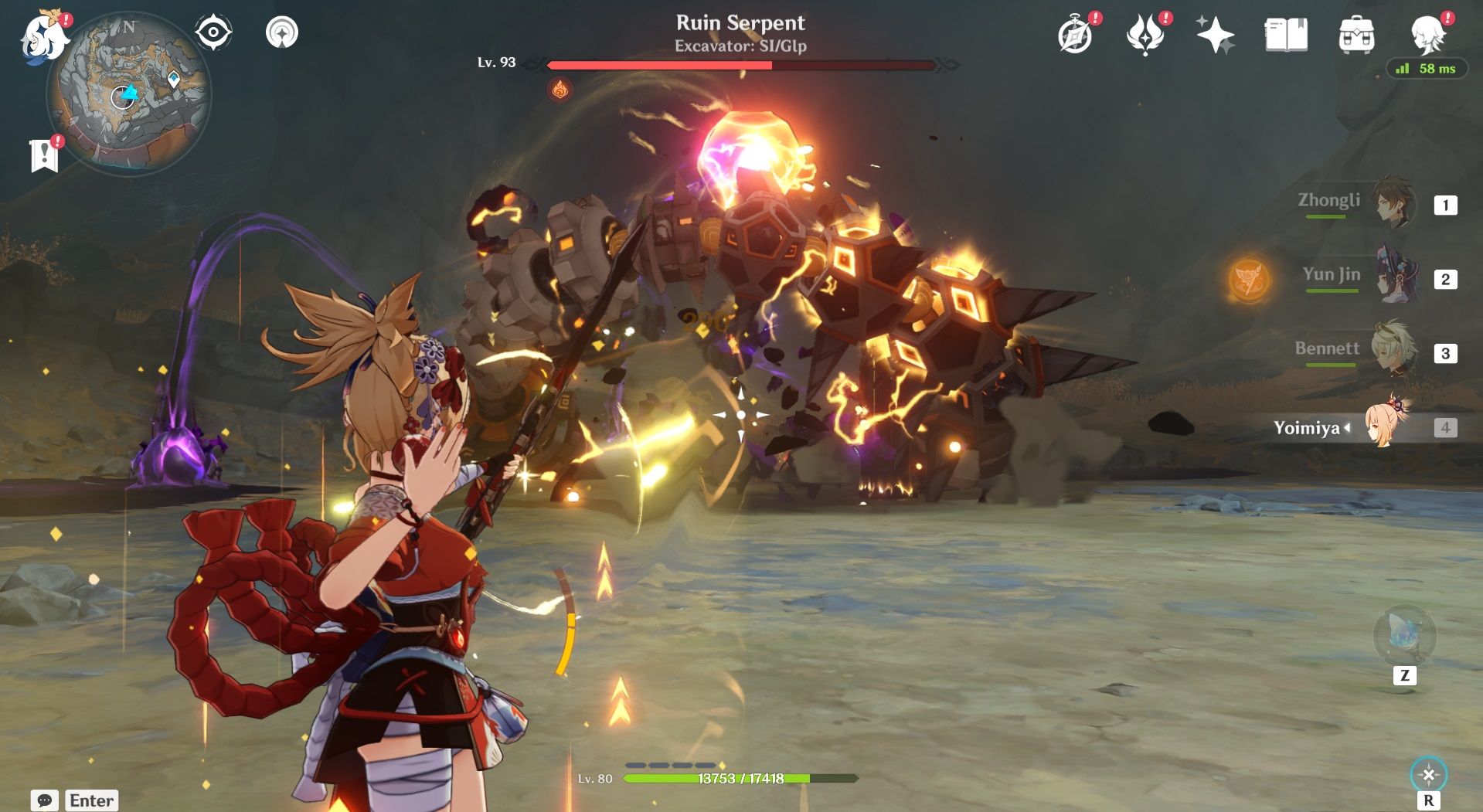 The Ruin Serpent moves around the arena frequently and offers very limited windows to do damage, so you’ll want to utilize characters that can effectively deal with this evasive, defensive style of combat.

Ranged characters like Ganyu and Yoimiya really shine as DPS options for this fight. They can chunk the cavernous cobra’s health from afar, letting you save your Stamina to escape its vortex or chase down the Oozing Concretions.

You might want to leave Physical DMG characters out of this fight, since the Ruin Serpent has a 70 percent resistance to Physical DMG. Sorry Eula, you’ll get your vengeance one day.

Characters with fast, powerful Elemental Skills or Bursts are also effective for dealing the maximum amount of damage during the Ruin Serpent’s paralyzed state. If you can take out the boss in one attempt during this phase, the fight will be a lot shorter for you overall. Ayato, Ayaka, Hu Tao, Yae Miko and Raiden Shogun are just some characters that will work well for this purpose. 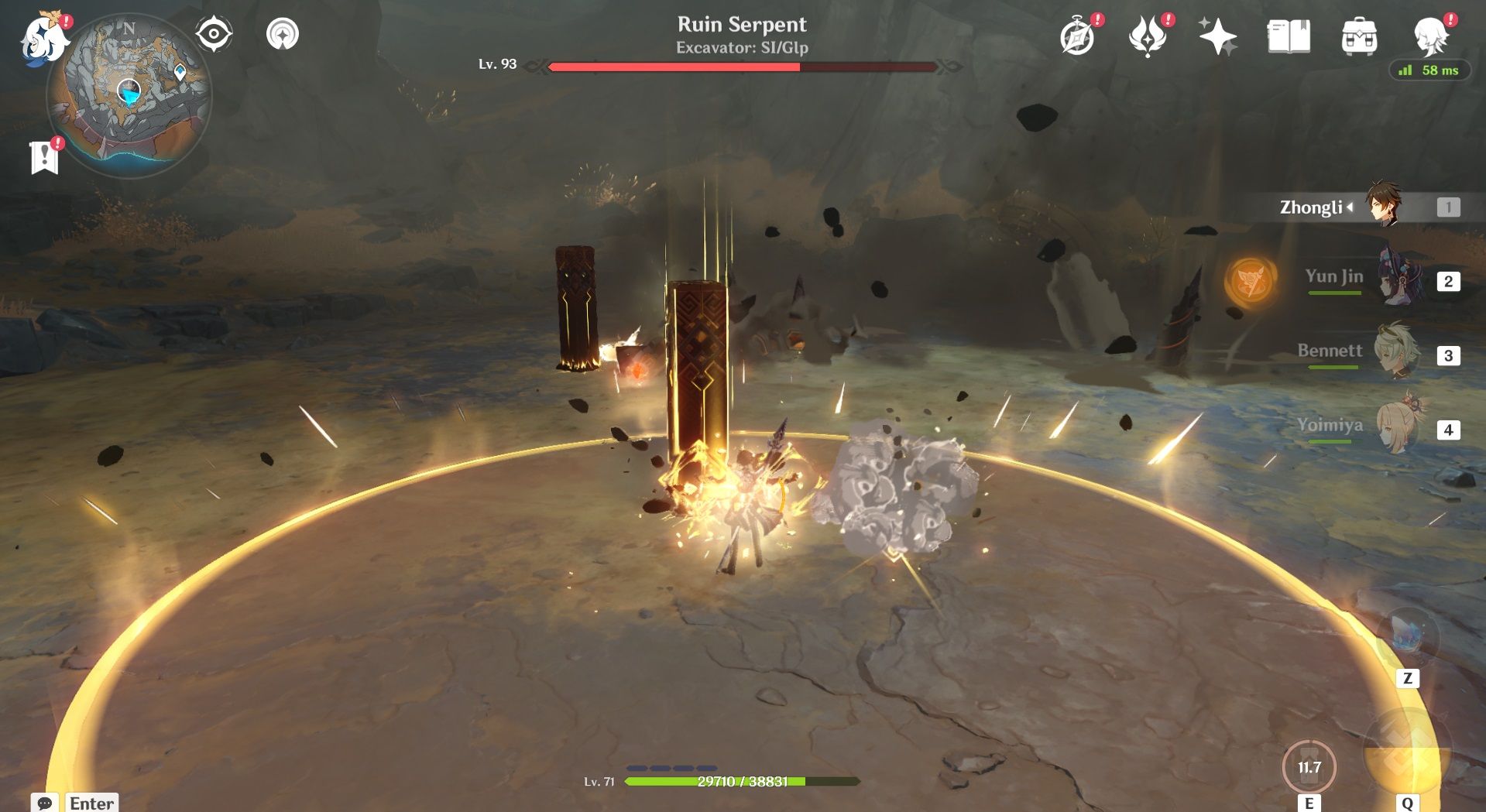 A Claymore-user or a Geo character is also an asset during this fight, enabling you to destroy the yellow crystal that occasionally spawns in order to restore your Lumenstone Adjuvant’s energy. Itto fulfills both these roles, so consider enlisting the Arataki Gang’s leader if you have him.

A shielder like Zhongli, Noelle, or Diona is never a bad character to bring to a boss fight, but you probably won’t be taking too much damage as long as you keep your distance from the mechanical monster. Healers aren’t terribly necessary either for the same reason, but they can be handy if this fight turns into one of endurance.