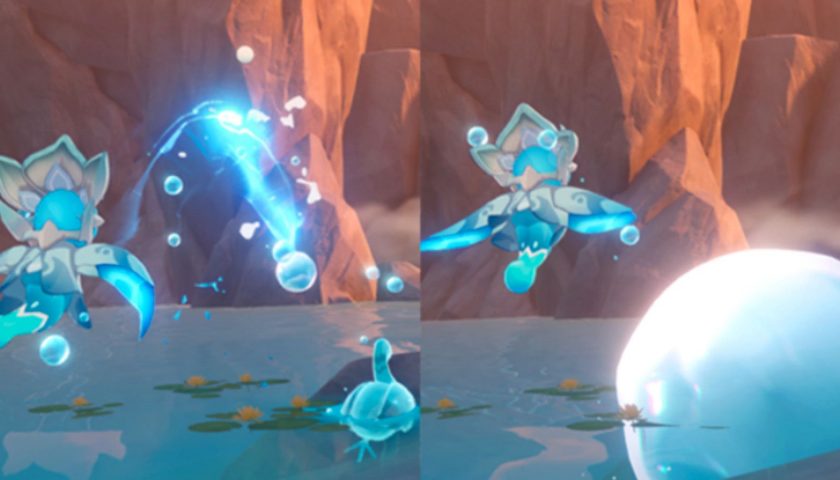 There is a huge new event that just dropped in Genshin Impact called Wishful Drops. It’s a great way to earn experience for new characters like Rosaria and is divided into two parts, one that will even net you a pet. The event intrudes new lore about Oceanids to the game by introducing you to a tiny Oceanid named Endora, who is a child.

On the flip side, it shows just how aggressive Rhodeia can be and gives a tidbit of information about the hydro nation of Fontaine, which supposedly has much more dangerous hydro beasts than Rhodeia that you may eventually have to deal with.

Getting Started With The Wishful Drops Event 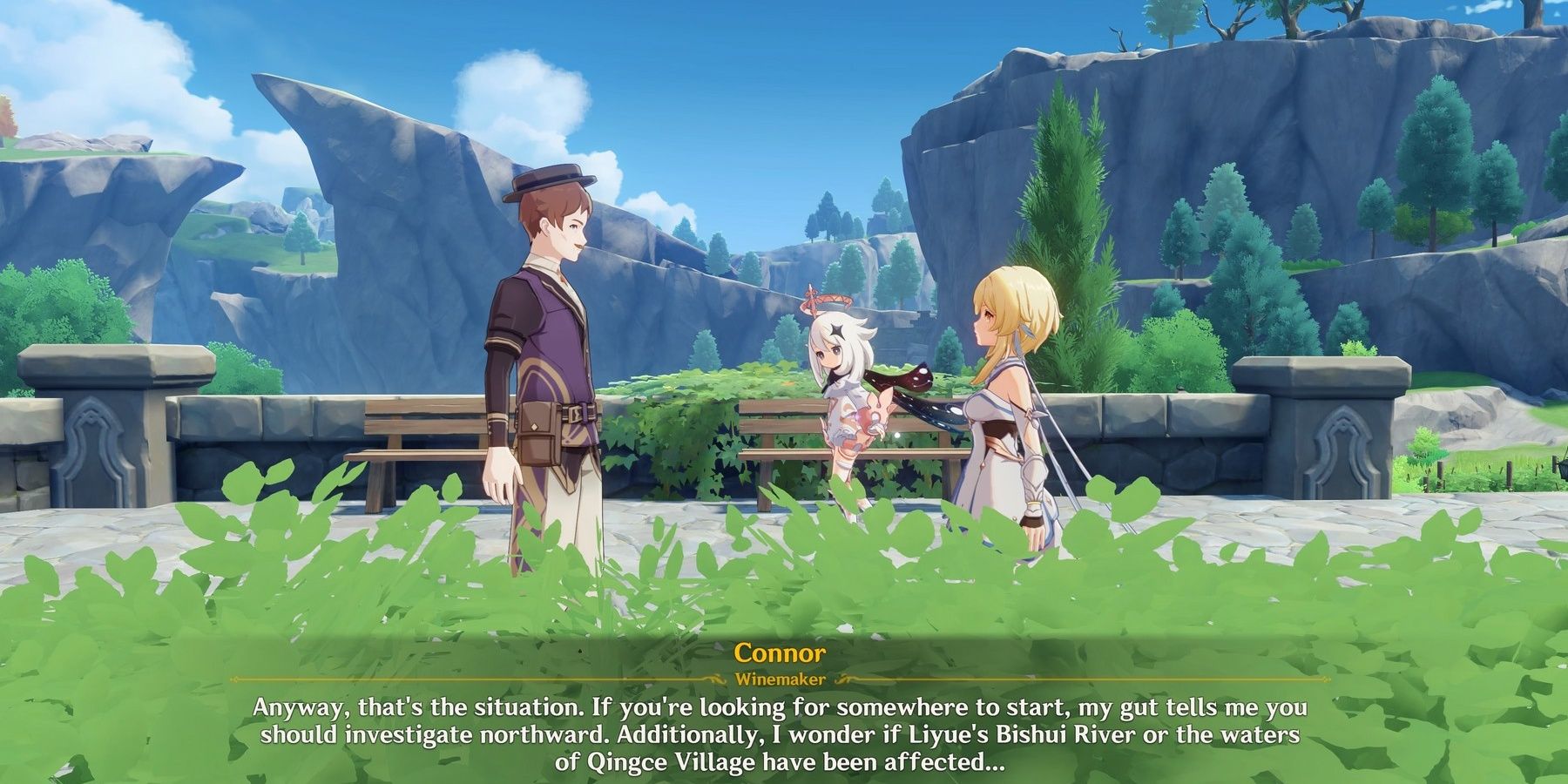 As with many events, if players are Adventure Rank 20 and above, the quest will automatically pop up the next time they log in to the game. The quest to start the event is called Life Flows On. It can be started by talking to Katheryn in Mondstadt. Afterward, you need to simply head to Dawn Winery to chat with Connor, who will inform you that the river’s water has a strange bitter taste.

Follow the map down the river a ways to find a group of hydro slimes. After defeating them, you’ll meet Endora, who asks you to take them to Springvale. There they will come to the conclusion that they needs to absorb hydro animals in order to grow and learn to understand being an Oceanid better.

How To Complete Endora’s Education 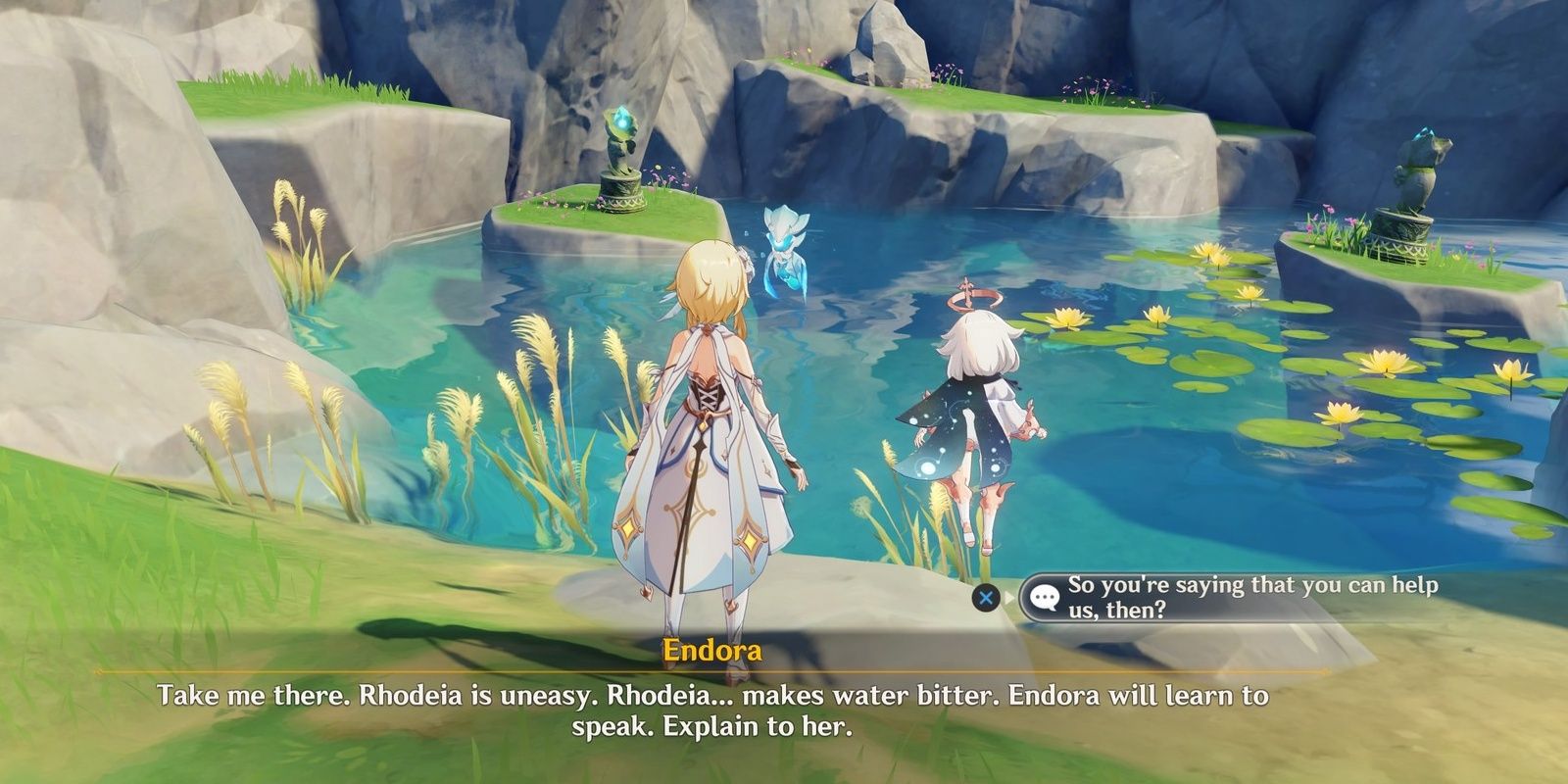 Endora’s Education will send you back to the river below Dawn Winery, where you will need to equip Endura. To do this, go into your key items inventory where your kamera is located and equip the bottle. Once this is equipped, you can bring Endora out at any time to shoot bubbles at nearby hydro monsters.

You can disable this at any time, but this can be problematic if hydro creatures are attacking you. You’ll also notice that there are usually enemies around the hydro animals. Be sure to take them out before bringing out Endura. 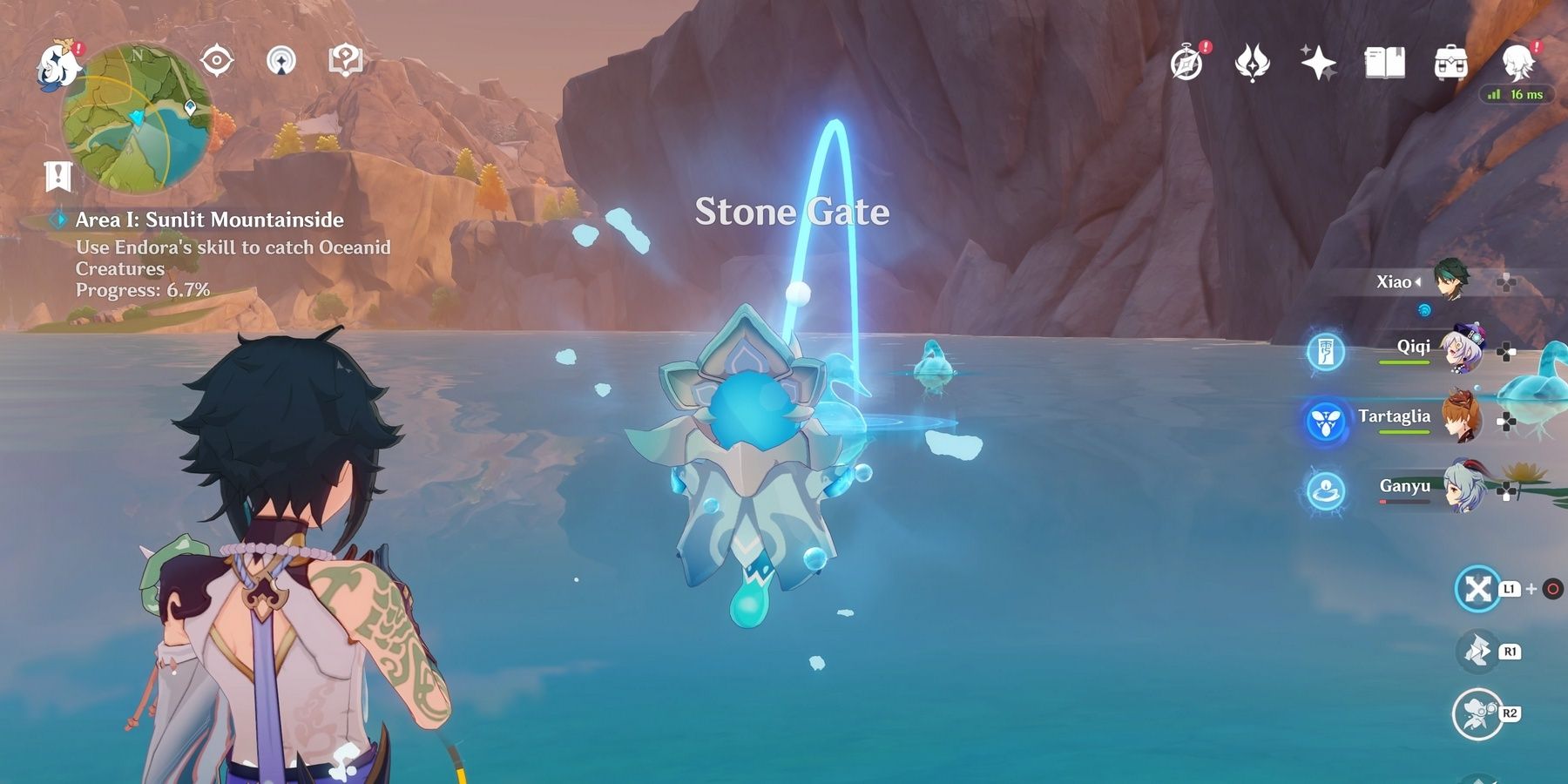 Once the area is clear, you can use your elemental skill button to aim and shoot bubbles at creatures. Keep in mind that this will most likely upset them, and they will begin scurrying around the area. If they panic, they will calm down after a few seconds, but this can make them harder to catch as they sometimes move farther into the water, especially in the case of mallards.

Bubbles will only stick around for a few seconds, though, so it’s easier to wait until your aim line is on top of the animal and hit them from the beginning. Once they are encased in a bubble, Endura will observe them shortly afterward. If the hydro animal is being too slippery, try freezing them to hold them in place. 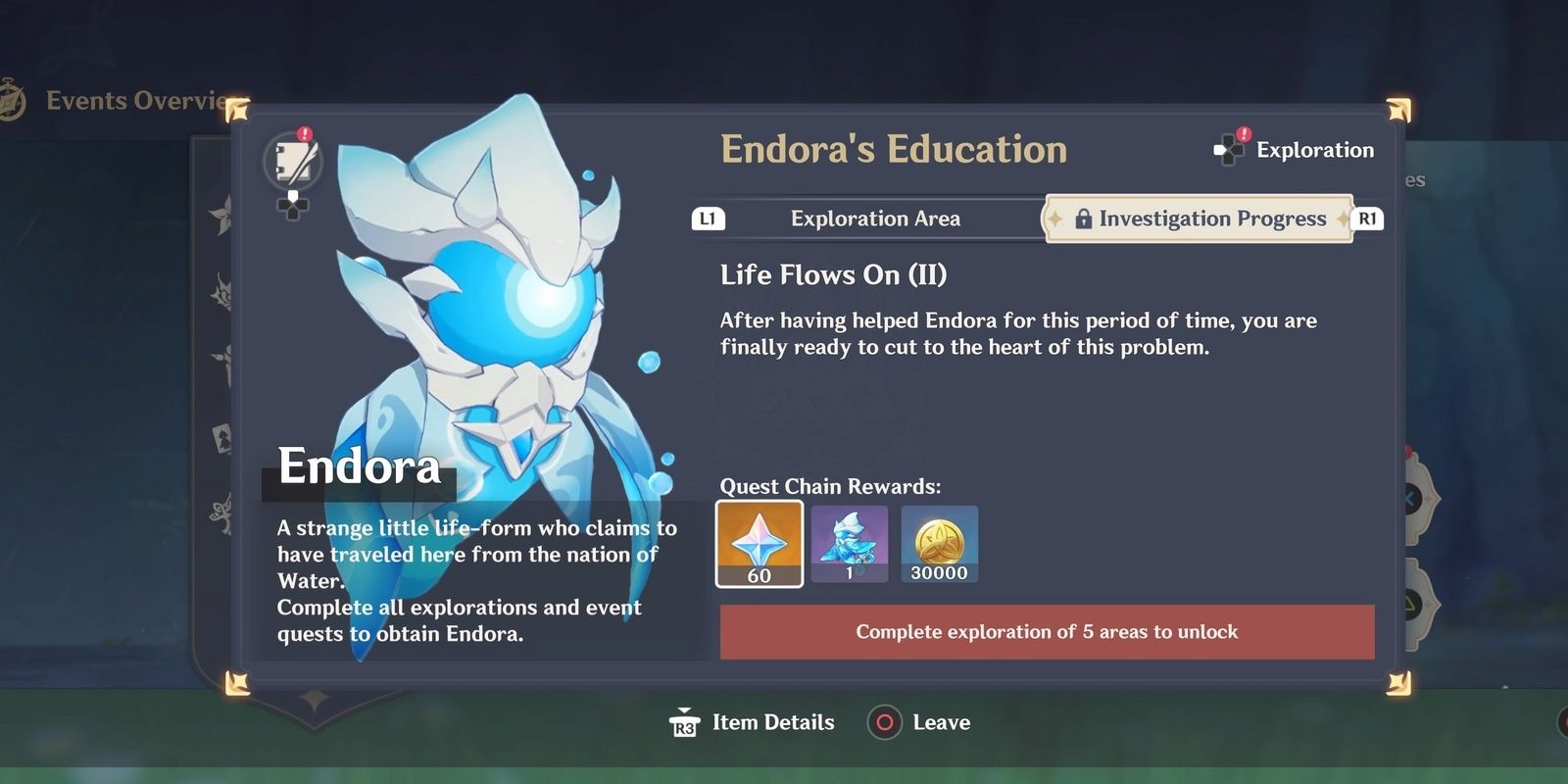 There are five parts to this event that are time-locked. Each one looks likely to require you to visit a different capture area. When you’re in a capture area, the percentage you have left until completion will display under your mini-map.

For each part you beat, you’ll get a Heart of the Spring, which can be used to claim prizes from the new Rhodeia battle, rather than needing to use Resin.

You’ll be capturing the various hydro animals previously seen in the Rhodeia boss fight, and they will engage you if you get too close. There are also some extra mechanics that make this fight tricker. 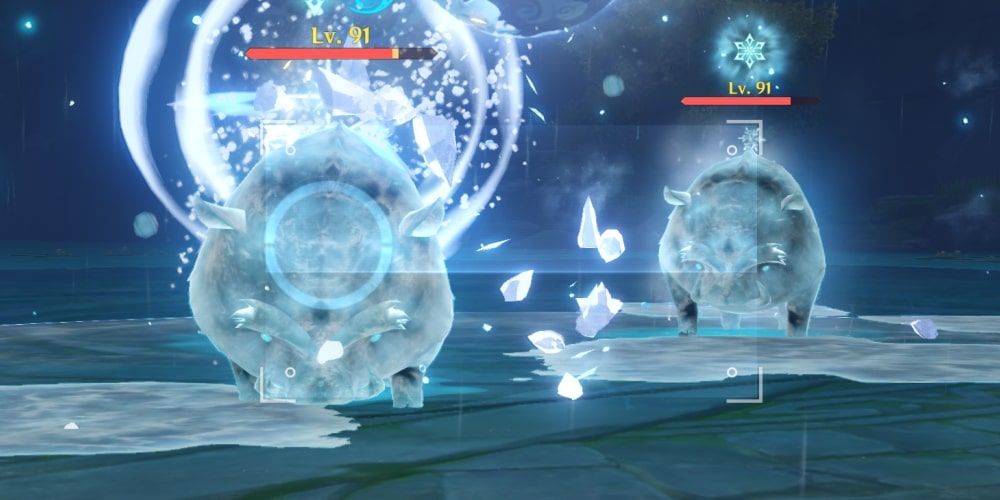 Here are the different animal types and their attacks:

How To Defeat Rhodeia Of The Loch 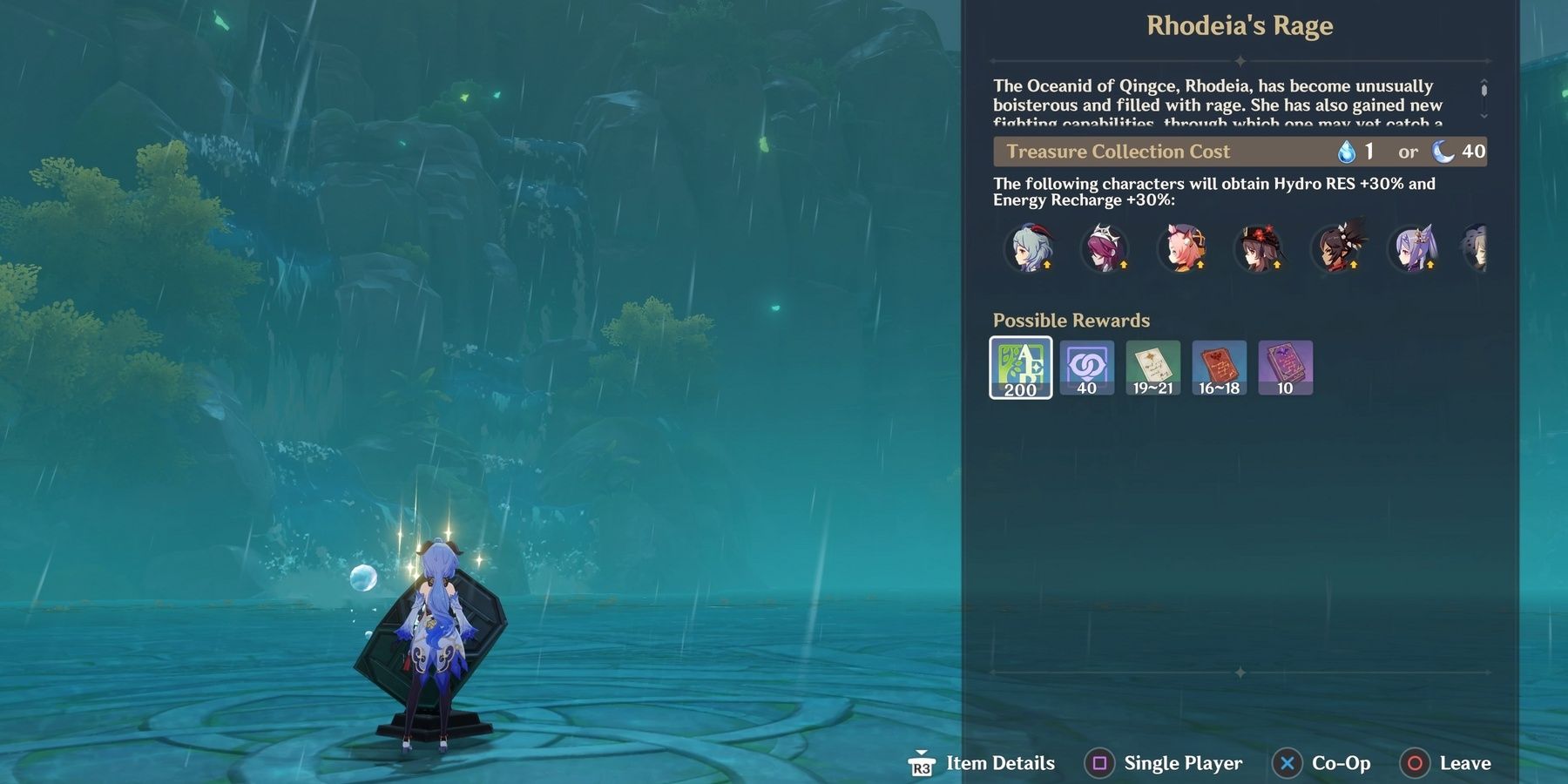 Rhodeia is even more violent than usual and can be challenged to get leveling books, adventurers’ experience, and companionship experience. To claim prizes, players will need to use either a Heart of the Spring item obtained from finishing one of Endura’s quests or 40 resin.

To access the new fight, you’ll need to interact with a cube in the middle of Rhodeia’s arena; just make sure to avoid the blue circle that starts the normal boss fight. The cube will give you the choice to begin the fight or start matchmaking.

The menu also lists several characters who get a 30% hydro resistance buff and a 30% energy recharge buff when used in the battle. They are:

Rhodeia is the center part of the fight this time, and players will have to attack the Oceanid directly to get rid of his health bar. He can now dive at players, shoot powerful beams of water, summon huge whirlpools onto the field, and summon hydro creatures.

Be sure to pay attention to messages that pop up on the screen, as they will tell you when to go to a water spout circle to avoid massive amounts of attack damage. Just stand on top of it and you’ll be lifted to safety.

Rhodeia cannot be frozen in place like hydro creatures can and will mercilessly keep attacking the player. Please note that you will not get the normal ascension materials like Cleansing Heart or artifacts from the event battle.