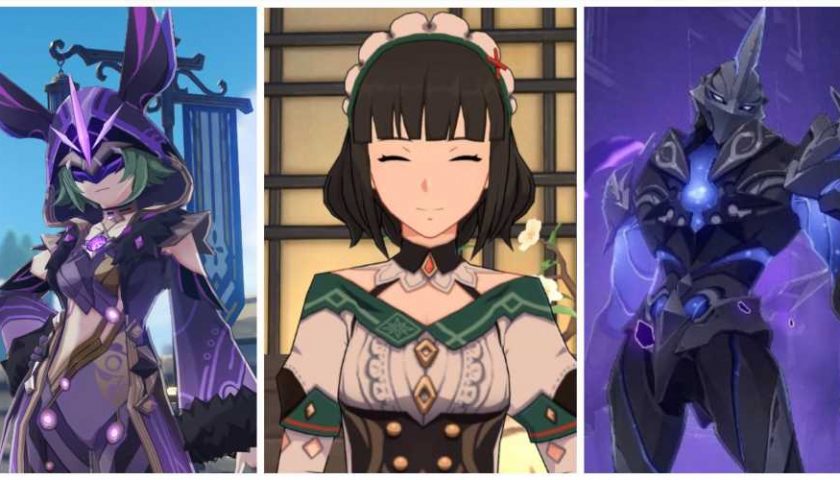 Genshin Impact isn't HoYoverse's first gacha game, but it's certainly its most popular. Alongside the open world exploration, frequent content updates, and interesting story, one of the biggest factors of the game that draws you in is the character designs.

The colorful cast of playable characters makes it so that everyone can find at least one favorite. However, this can distract you from the NPCs in Genshin Impact, making you overlook them or skip their dialogue. Some NPCs may not have the most groundbreaking things to share, but there are many whose stories contribute to the lore of Teyvat and give us clues on some lingering questions. 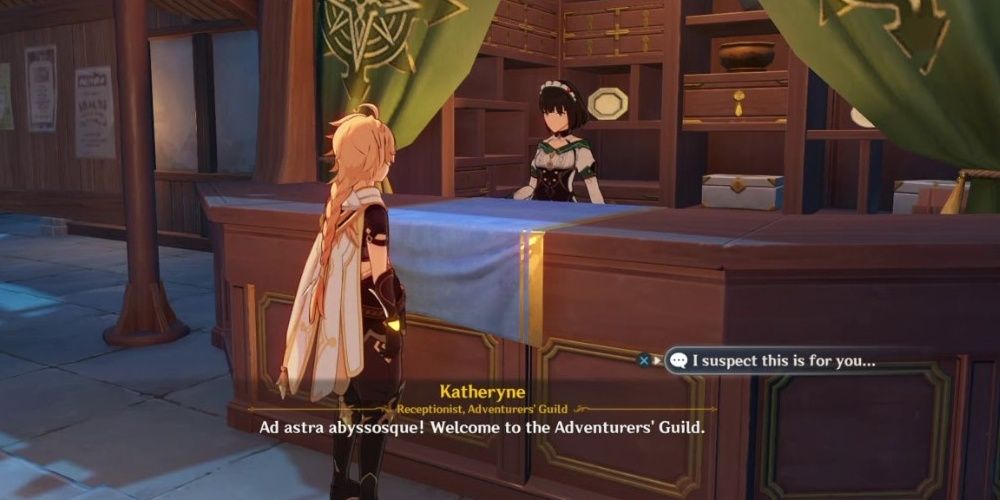 Katheryne has been around since the beginning. She's somehow able to be at every Adventurer's Guild you travel to, and there are dialogue options you can choose when speaking to her that show how confused the Traveler is by this mysterious ability of hers.

As if that's not strange enough, if you idle around her, you will be able to hear her say, "Error," and "Rebooting." Does this mean Katheryne isn't even human, but some sort of robot? And how is she seemingly able to be at every Adventurer's Guild at once? There must be more to her, whether it turns out she's on the Traveler's side or secretly watching them for someone else. 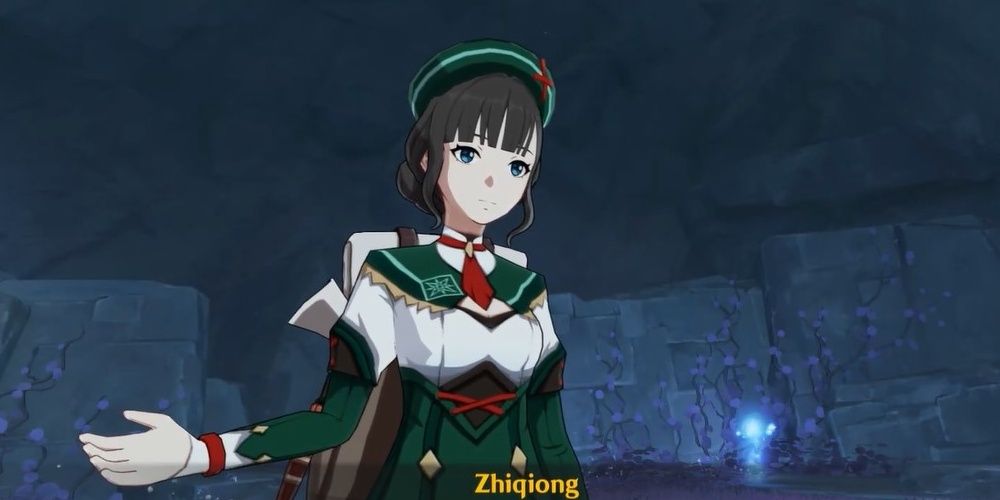 The Chasm has shown how dark certain aspects of the lore can get, and Zhiqiong's story is no exception. She's a member of the Adventurer's Guild whom you meet in The Chasm. Though The Chasm takes a toll on her health, as it does to all humans without Visions, Zhiqiong is determined to keep going and make a name for herself. Her goal is to leave a legacy behind.

At the end of her quest in The Chasm, Zhiqiong disappears and leaves behind a letter. This letter highlights her fear of being forgotten, but it also shows you something important: that Zhiqiong resents the gods of Teyvat and questions the importance of Visions. If you only look at the surface level, Visions are considered a blessing, and those who don't have them envy those who do. However, Zhiqiong's story and letter can make you wonder about how the gods decide who is 'worthy' of a vision. 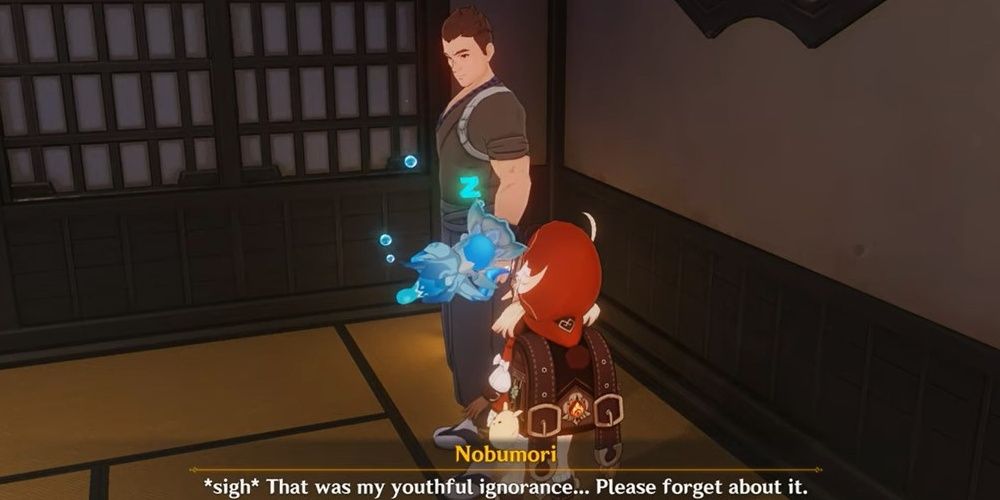 This NPC is completely optional to talk to, so it's understandable if you don't recognize or remember him. Nobumori can be found in Komore Teahouse in Inazuma. He used to be a Vision holder, but lost his Vision after losing to Kamisato Ayato in a duel.

Though he isn't necessary to talk to, Nobumori's dialogue is interesting. He doesn't seem upset by the loss of his Vision at all. In fact, he describes losing his Vision as "letting go of a heavy burden." He also says, "As for me, I no longer need to slave away for some glittering little ball." This is peculiar, considering most people consider Visions to be a gift from the gods. This conversation with Nobumori is another little hint that Visions and the gods may not be as great as they seem. 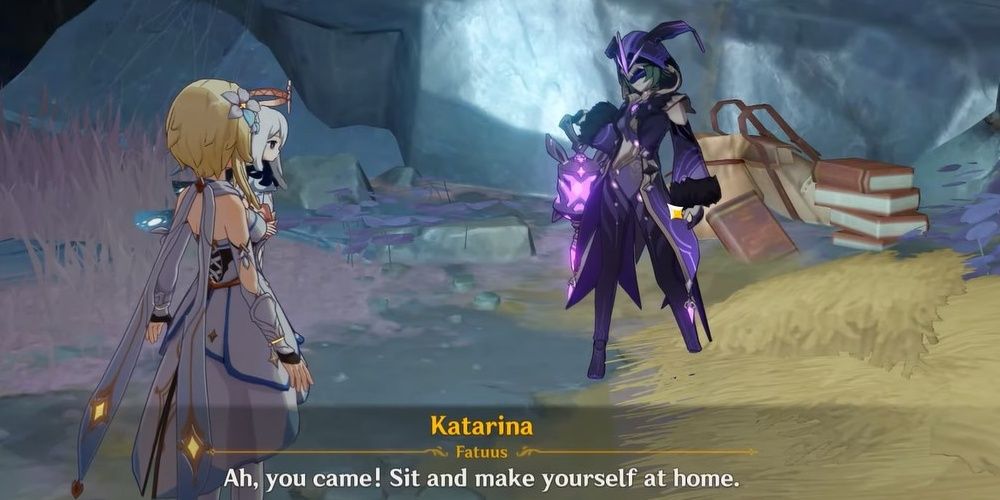 Katarina is a Fatuus NPC who activates a World Quest in The Chasm. She's been in The Chasm since before it was closed, searching for any sign of her brother Nikolay after he disappeared during a mission in the depths. The first thing Katarina does when you talk to her is ask who you are and why you're attacking her. Since she's been cut off from the surface for a while, she isn't as hostile towards the Traveler as other Fatui members tend to be.

This allows you to catch a glimpse of another side of members of the Fatui. She says herself that the Fatui are "just ordinary people" outside their jobs. You also quickly learn that Katarina cares deeply for Nikolay and would do anything to find him. Katarina's final fate is unknown after going to look for Nikolay, but she leaves you with a new impression of Fatui members. This is one of the few instances where you're able to interact with a Fatuus beyond engaging in battle with them. Katarina shows you that they're more than just common, unfeeling enemies. 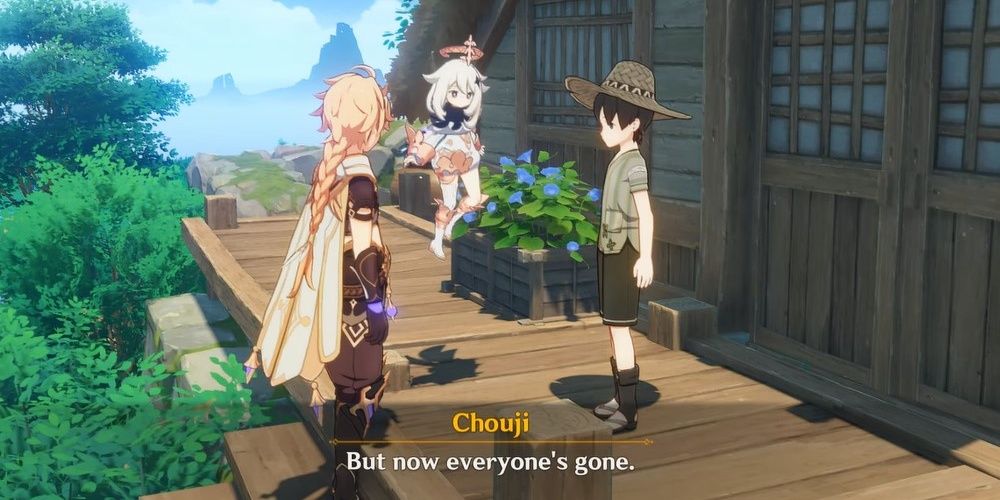 Chouji is an NPC in Inazuma. He lives alone in Higi Village, as it was abandoned because of the Tatarigami affecting villagers in the past.

It's through Chouji that you learn more about the Tatarigami. You also learn about his parents, who are missing and whose fates are unknown.

Chouji's story gives backstory on what exactly happened in Higi Village and how the Tatarigami affected the villagers living near it, either by killing them or making them lose their minds. You can find a letter from his mother addressed to him. In the letter, his mother asks him not to try to look for her. Chouji never received this letter, however, and has set out to find both of his parents. 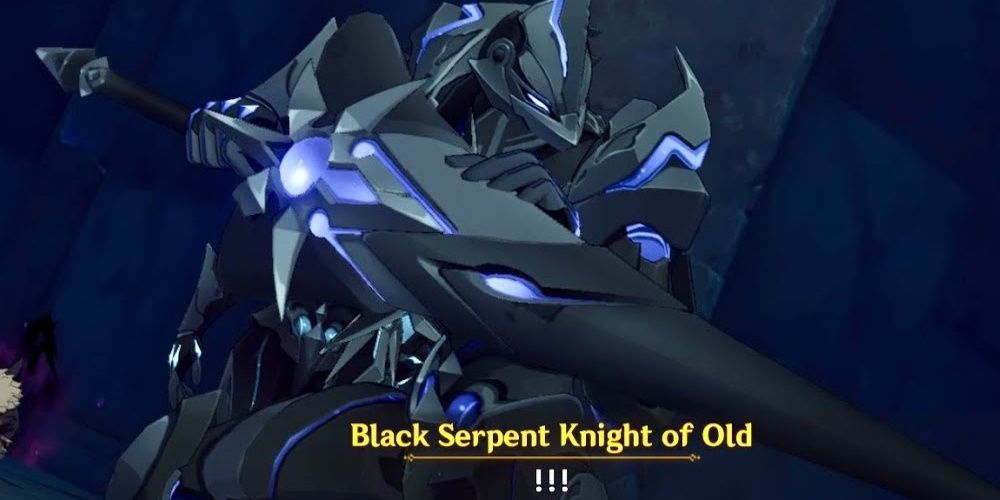 Black Serpent Knights are enemies in the game, but they potentially hold important information about Khaenri'ah. They used to serve Khaenri'ah as part of its Royal Guard until its fall, after all. Every time you approach a Black Serpent Knight, they don't just engage in battle; they also say something to the Traveler, with each Knight saying something different. Serkir, for example, calls you an "envoy of the heavens," and swears vengeance.