I’m perched on top of a rocky outcrop with a pair of binoculars in one hand and a hunting rifle in the other. According to Generation Zero, the latest effort from Avalanche Studios, mere days ago I was a mild-mannered 1980s-era teenager. After a trip to the nearby islands with my friends, I’ve returned home to find that everyone I’ve ever known is missing and presumed dead. In their place are dozens of murderous robots.

After picking my way overland to the local bomb shelter, only to find it abandoned, I started north looking for weapons and equipment. After defeating several low-level mobs, I’ve spent the last in-game day painstakingly working my way along the coast. Collectibles, in the form of handwritten notes and answering machine messages, indicate that a group of heavily armed fishermen made a last stand nearby. With luck, they’ve left behind a stockpile of explosives that I can use to punch through the next bridgehead and break out to the north.

I’ve spent days hiding in the woods; the time for evasion is over. This is a proper assault, the goal being to clear out the robots so I can search for more clues to what’s going on here. 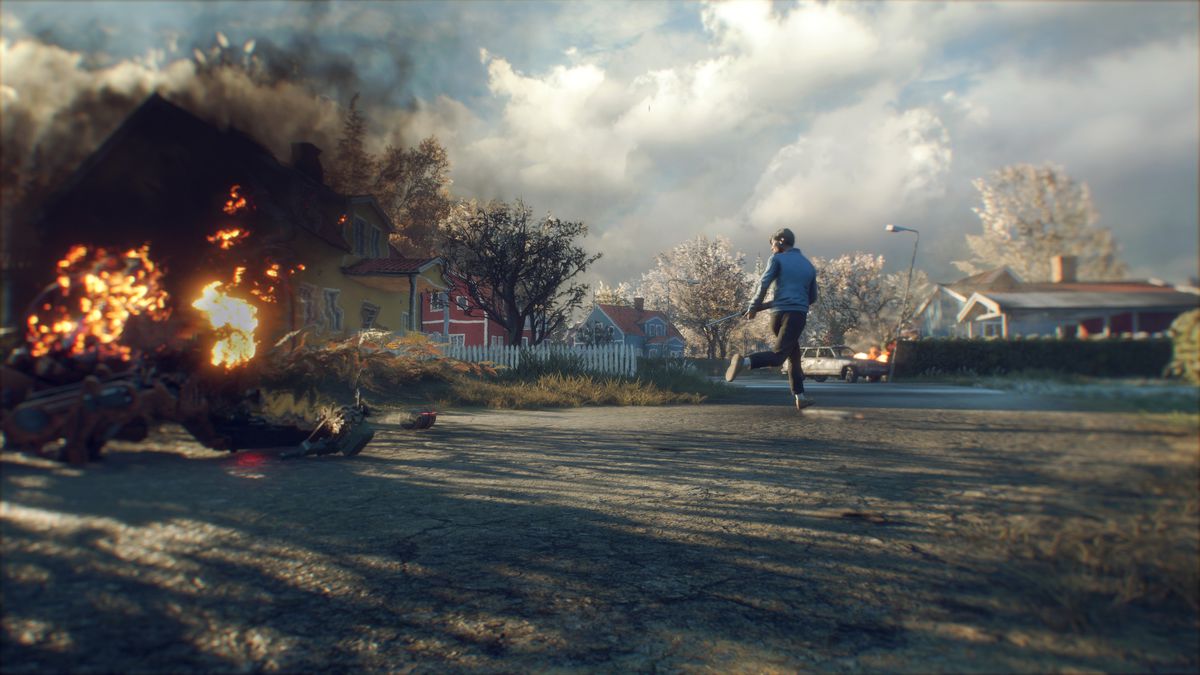 Enemies will advance if they feel they have the advantage, and retreat when players get the upper hand.
Avalanche Studios

Generation Zero feels like what would happen if Dear Esther and DayZ had a baby. The game feels alien, thanks not only to the time period that it represents but the part of the world that it portrays. It’s unapologetically Swedish, reflecting the nationality of Avalanche Studios and the small internal team there. All the voice-over is in Swedish, as is the text on the in-game collectibles. Even the interiors of the homes include cross-stitched art that’s unreadable for me without subtitles.

But the game is also immediately familiar. If you’ve ever picked up random weapons in PlayerUnknown’s Battlegrounds or chugged a can of Slurp Juice in Fortnite, you know exactly what to do in the opening few hours of Generation Zero.

And then everything gets super weird as the robotic enemies get bigger and bigger, more and more violent.

To help me on this raid, I’ve radioed out to Ben Kuchera, Polygon’s opinions editor, and brought him into my game. We open our maps, and I quickly sketch out the plan of attack.

All the people in the village below are gone, hustled off by the military, with any luck. But at least a dozen robots are still roaming the area. The smaller, four-legged ones are the most numerous. Most are painted orange and lightly armed with 12-gauge shotguns. The ones sporting camouflage and armored plates are no joke, however. Best to avoid them if we can.

The big issue will be the massive bipedal robots, each one standing around 14 feet tall. There are at least four of them in the village. The ones I’ve encountered so far spit 7.62 mm rounds that can tear you up in a hurry. Get too close and they’ll leap at you, bringing down a massive bladed arm that knocks you prone.

The plan is simple. Since Ben is armed with a submachine gun and plenty of ammunition, he’ll attack from the west and try to engage the weaker robots up close. His distraction will allow me to stay up on the ridge to the north, and target the larger and more heavily armored robots at range. With my 8x scope, I’ll be able to zero in on their weak points, explosive fuel cells exposed on their backs. 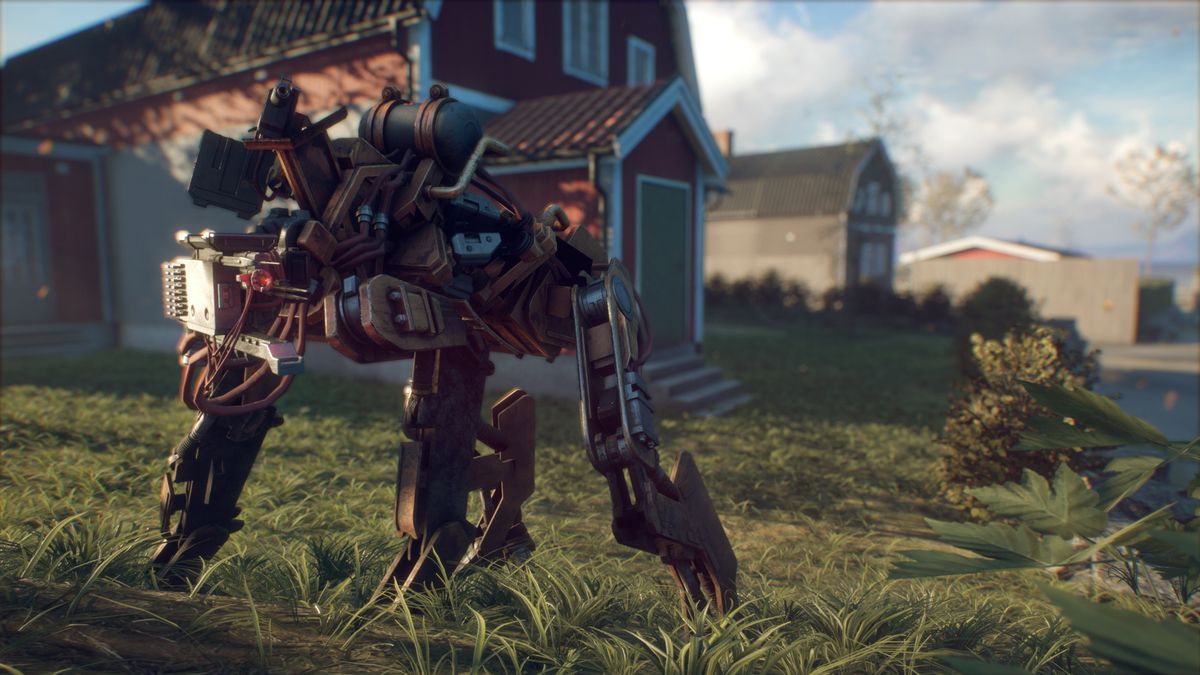 I’ve found half a dozen versions of these same roughly bear-sized robots in Generation Zero. Using binoculars to determine which ones you’re facing is key to developing a good plan of attack.
Avalanche Studios

We set a fallback position on the map, divide a few dozen first aid kits between us, and then move out. But before we can even reach our jumping-off points, everything goes to hell.

The robots detect us both before either of us can get into position. The bulk of their forces advance on Ben, who begins a fighting retreat, emptying his submachine gun as quickly as he can reload it. My hunting rifle gives me excellent range, but I can’t even see Ben to provide support, because at least four robots have me pinned down with suppressing fire from the village below.

Dodging incoming rounds, I manage to nick a robot’s fuel cell at 300 meters. The detonation takes out a second robot standing next to him. The incoming fire slows, allowing me to retreat to our fallback position, where I can finally get a decent view of Ben. I turn my attention to him, laying into the swarm of robots nipping at his heels.

That’s when a pair of huge bipeds leaps onto the ridgeline with me. I switch to my heavy assault rifle, flip it to full auto, and lay into them. Nearly back to back, Ben and I manage to push the robots off the hill, showers of sparks cascading all around us in the rain. Low on ammunition, and completely out of healing kits, we push forward into the town to resupply and begin the search for the next beat in the story. 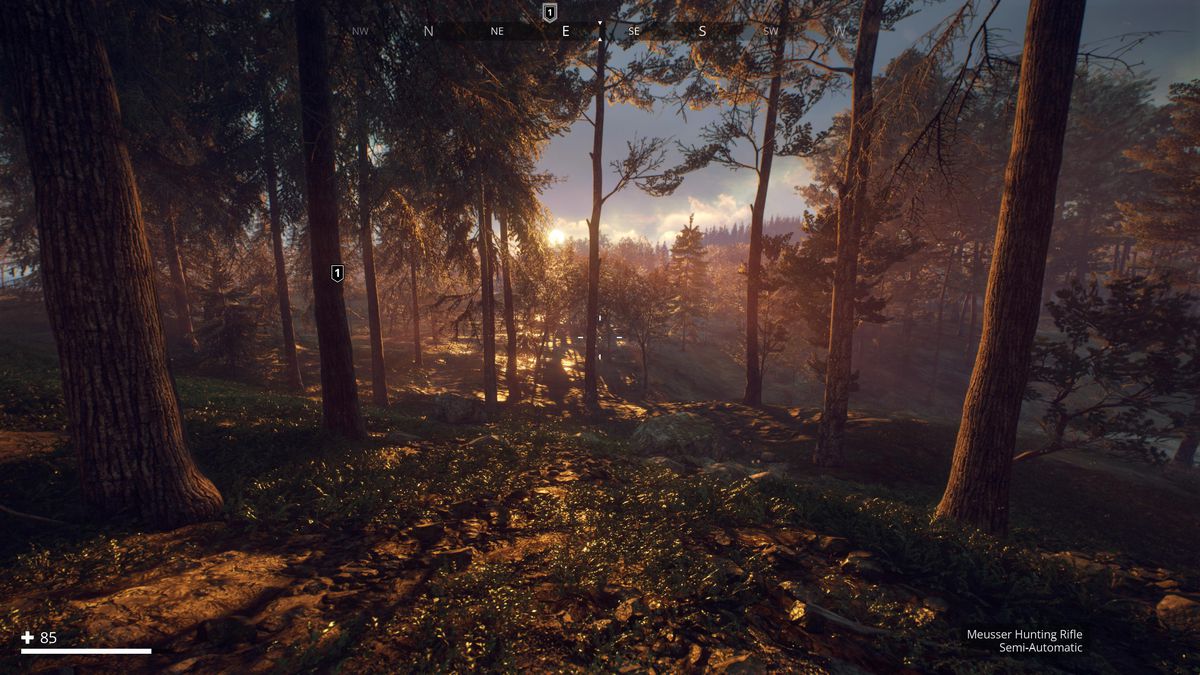 Generation Zero is jaw-droppingly beautiful at times. Created by the same team behind TheHunter: Call of the Wild, it models all sorts of atmospheric weather systems including rain and fog, and features a full day and night cycle.
Avalanche Studios

Generation Zero is full of these kinds of set-piece battles. None of them appear to be scripted. Instead, robots wander the landscape in herds going about some mysterious task, behaving intelligently and reacting to the presence of players. In the background, the game’s storyline unfolds through a series of collectibles. It feels like playing a more atmospheric take on the open-world survival genre. But rather than dropping me into a post-apocalyptic sandbox, Generation Zero provides an actual narrative, a mystery unfolding all around me.

However, the game is filled with quirks and bugs. The weirdness starts with the multiplayer system, which is bare-bones to say the least.

Sessions can be made offline for single-player action. Alternately, you can open up your game to anyone on Steam, or adjust it so that it’s invite-only. You can also set the number of players, up to four, that you’d like to have in your world. There’s no lobby. No server list. Nothing.

Of course, progress only carries over for the host. When you hop into someone else’s game, you tend to spawn miles away from the action. Once logged in to my instance, other players can see all the missions that I’ve unlocked. But for some reason, they can’t use my network of safe houses. To bring other players closer requires a one-time-use item in the form of a military field radio, which creates a spawn point. That’s how I was able to bring Ben closer in the example above. But if I didn’t have any radios, it might be about an hour or more for Ben to get to me on foot.

Thankfully, there’s no feeling of scarcity when you spawn into a round of Generation Zero. I could probably just saunter over to where I last found some radios and grab another. That’s because loot spawns semi-randomly every time you start a new session. 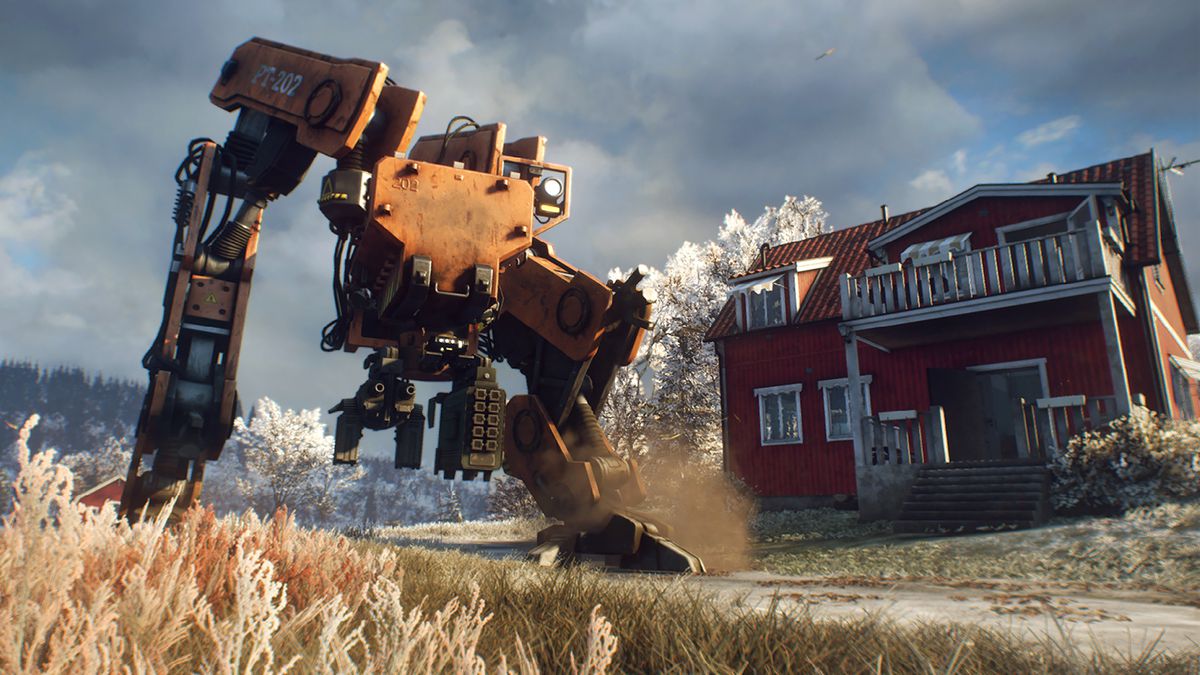 Enemies in Generation Zero can be massive. This two-legged walker is fully two stories tall. Some will launch gouts of fire from tanks on their backsides. Friendly fire is on for enemies, meaning that you can lure smaller robots into the arc of fire with great effect.
Avalanche Studios

The loot caches also appear to be exclusive to each game client. Standing next to each other, Ben and I found that we each saw different loot inside the same crates. The crates themselves weren’t even the same color. He scavenged the ammunition for my guns from his version of one crate, while I grabbed him some extra healing items from mine, then we dropped our loads on the ground and swapped them out.

Oddly enough, character death is nothing more than an inconvenience in Generation Zero. If I go down, I can pop a dose of adrenaline and get back into the fight. When I run out of adrenaline, I just spawn back at the last safe house with my entire inventory in tact.

The only challenge to progress, it seems, is finding enough players to join you. That, and finding the right combination of firepower to bring down the game’s larger enemies.

And that’s where the really interesting gameplay comes in. The robots in Generation Zero don’t have big glowing weak points, and damage appears to be location-specific. Hitting an armor plate might knock that plate off, exposing the fuel cell behind it. But if you don’t know where the fuel cell is on a given model, hammering it with automatic weapons fire is only going to piss it off.

Each robot also seems to have its own behaviors and mannerisms. Like in a Dark Souls game, there is a feeling of mastery that’s uncommon in the FPS genre. Generation Zero is a game about communication and careful planning, not twitchy reflexes. I’m excited to learn more about these robots over time.

Sadly, playing Generation Zero as a solo player feels almost impossible. There are simply too many enemies on the map. They’re extremely aggressive and, once you’ve drawn aggro, they invariably come running from miles around to corner you in a building. Even though they’re usually too stupid to find a way inside, rarely is there enough health or ammunition on hand to run out and take them down. The only solution is to bring in more friends (and therefore more firepower). 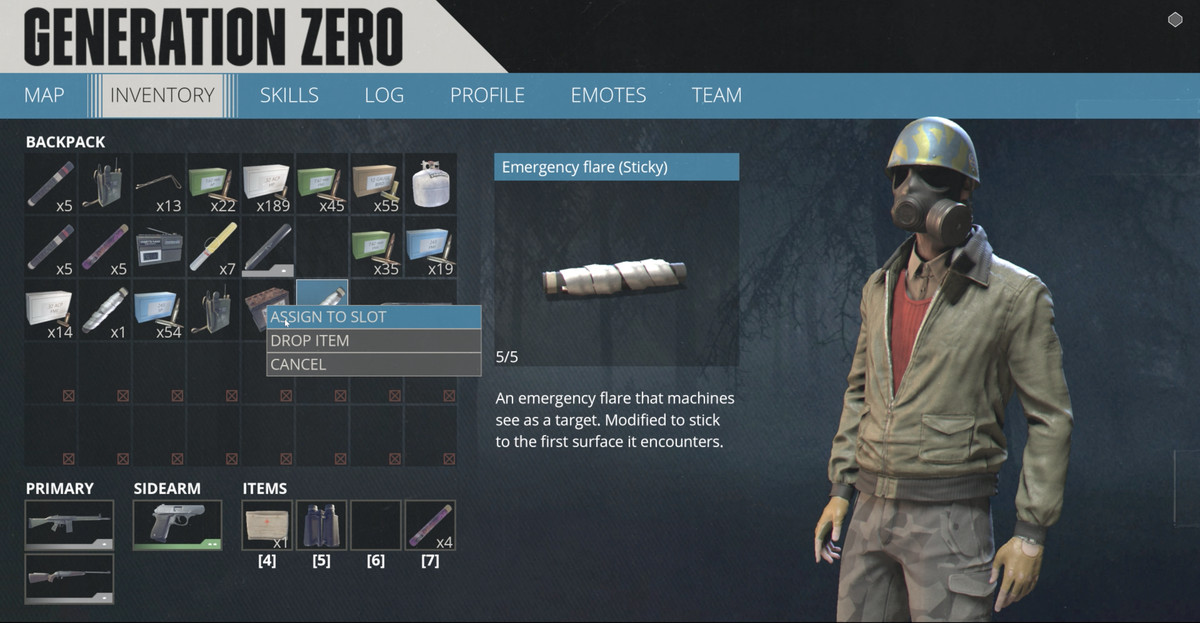 The inventory system in Generation Zero is, in a word, awful. Items don’t stack reliably, and managing weapon mods is a chore. Expect to take a knee and empty your pack regularly to make room for new loot.
Avalanche Games

But in spite of its quirks, Generation Zero feels promising. Taking advantage of its weird multiplayer format means that I can easily make my own fun. I can scout out an interesting group of enemies or the location of the next plot point, and then invite my friends in to help me push through it. But, since progress is only tracked on my character, those same friends likely don’t have a lot of incentive to show up and render aid.

It all adds up to a game that feels like an excellent first draft. Fans of battle royale games and open-world survival games should feel right at home — that is, until they run up against a mob that’s too big to handle on their own. Groups of players fresh off other cooperative shooters like the Payday series will have the most luck. But for your average consumer, Generation Zero is a tough sell. Without a committed team and good communication, there’s simply no way forward on your own.

Generation Zero will be released March 26 on PlayStation 4, Windows PC, and Xbox One. The game was reviewed on PC using a final “retail” Steam download code provided by the developer. You can find additional information about Polygon’s ethics policy here.