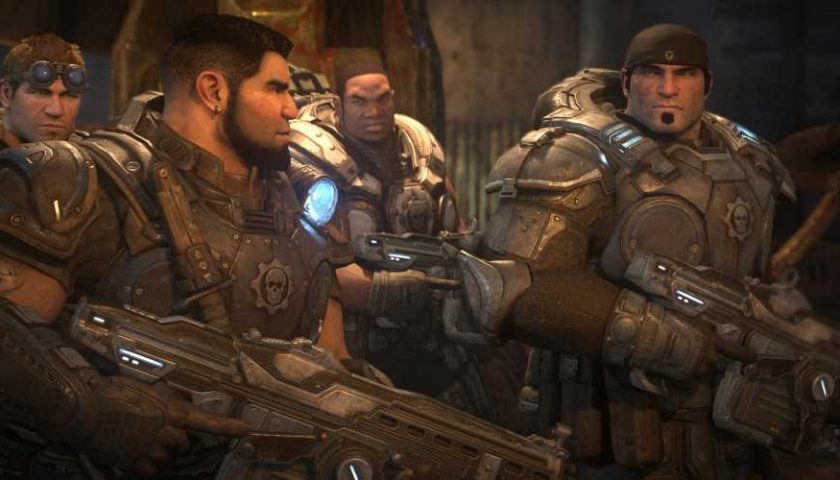 Gears of War is known for two things. Being the ultimate 'dude-bro' video game and conveniently placed, waist-high walls. Whether it's a game in the mainline series, the terrible Gears Pop, or the surprisingly good Gears Tactics, these two ingredients can be found in abundance throughout the IP. Considering this, you'd have to assume that a TCG based on Gears would include a very powerful card which has something to do with taking cover.

Well, it seems we'll find out sometime this year, as Steamforged Games has announced that Gears of War: The Card Game will release sometime this year. Unfortunately no other details have been provided, so we're just going to go ahead and make a wishlist of what we'd like to see. Since it's a card game, and not a board game, we can dream up characters, items, or even situations.

Aside from the absurdly powerful 'cover' card, the game would have to pay tribute to one of the most iconic and coolest weapons in video games, the Mark 2 Lancer. An action card featuring Marcus Fenix chainsawing through an enemy is a must. While it's portrayed in the aforementioned 'dude-bro' manner, another major theme of Gears of War is camaraderie. Hence, a team-up card – ideally featuring Marcus and Dom – seems like it would be the perfect fit. Of course, the actual card game may have a completely different formula to what I'm hinting at, so we'll just have to wait and see.

While we wait for Gears of War: The Card Game, another iteration of the IP is on the horizon, a Netfllix movie. No details have been announced, nor have any casting and production based decisions been made – all we know is that Netflix will be working with The Coalition on the movie. While no casting decisions have been made, Dave Bautista, who made an appearance in Gears 5, made it known that he wants to be cast as Macrus Fenix in the movie.

While Bautista played himself in the game – also including his Batista Bomb finisher – the wrestler turned actor would make a great Marcus Fenix, and will undoubtedly get fan approval.