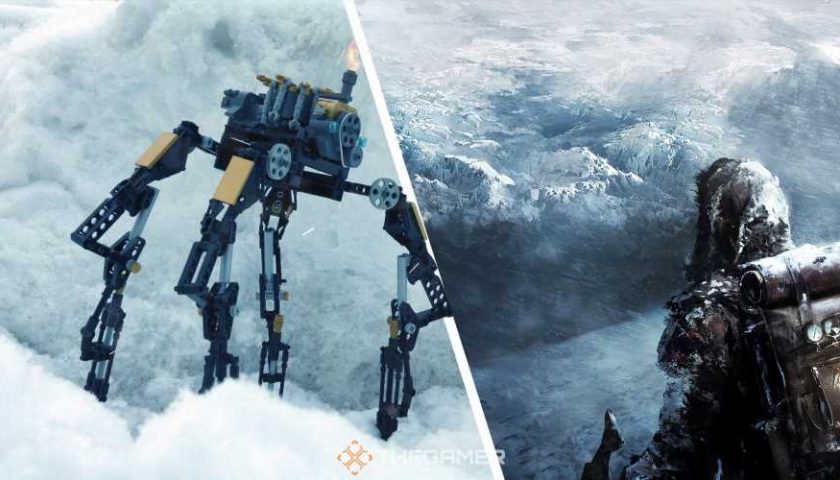 Since its release in 2018, Frostpunk has delivered a tough but super immersing survival experience. One of the things that makes this game so good is that everything you do matters, from the number of people you send into work to the laws you decide to sign.

Starting in the game is super challenging. You don’t know for sure which one is the path to succeeding, and in the blink of an eye, all hell can break loose, leaving you with a city full of sick people who can’t work or, even worse, a whole city that has decided to throw you out into the cold wilderness.

Through trial and error, you’ll eventually learn how to deal with things, but in the meantime, here are some super helpful tips for all of you Frostpunk newcomers. 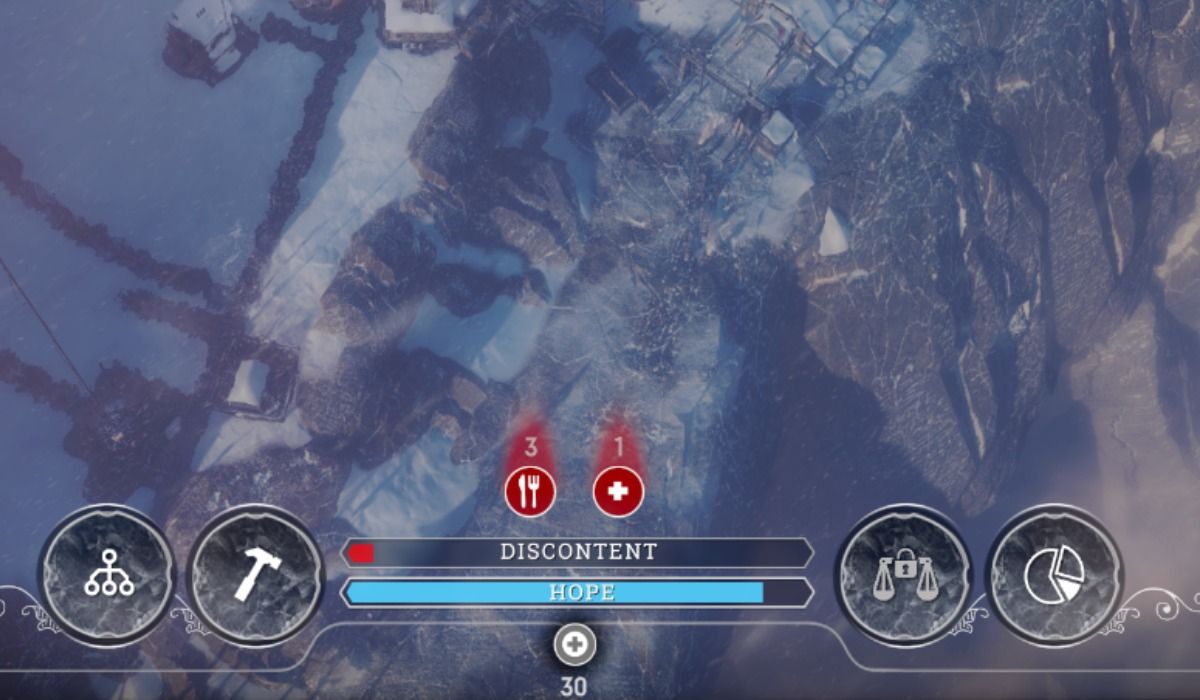 When you’re first starting out, it seems like the logical path to surviving is gathering and having a full stock of all the resources you need, like Wood, Coal, Steel, and Food. And while those are certainly important, you can’t forget about another gameplay mechanic: Hope and Discontent.

These two variables will be in the lower center of your screen, and the levels will rise and fall depending on the things you do. For example, passing some laws will reduce Hope or Discontent (or both) while fulfilling promises will raise Hope.

You need to keep an eye on these two because radical levels in either one of these factors will make people angry enough to mutiny, and you will be banished, ending the game. 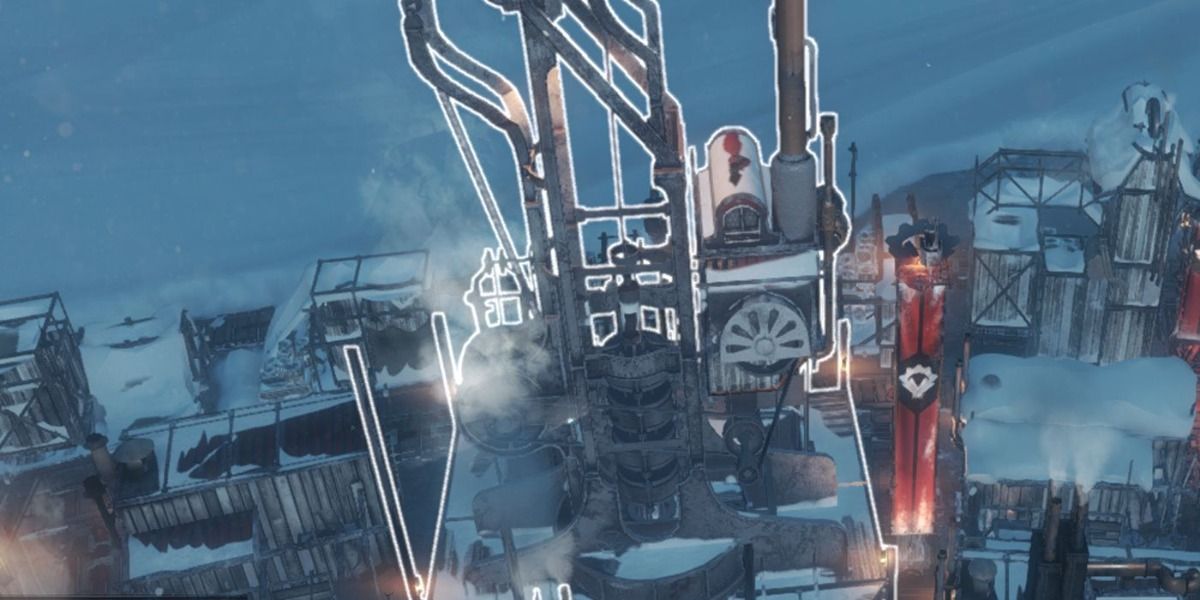 At the start of the game, you’ll find some resource deposits lying outside your city. All you have to do to gather them is select a few workers and send them there. The problem is that these deposits are finite, meaning that you’ll eventually run out of easy access places to find things like Wood, Steel, and Coal.

That’s why you should build a Workshop and start researching mining alternatives like a Sawmill to cut down frozen trees or a Coal Thumper to pump pressurized water underground and wash into the surface Coal from Coal deposits into the surface.

As time goes by, you’ll learn that even this solution isn’t definitive. The more you research, the better and more efficient buildings to gather valuable materials you’ll unlock.

Warmth Is Key To Keeping Things Under Control 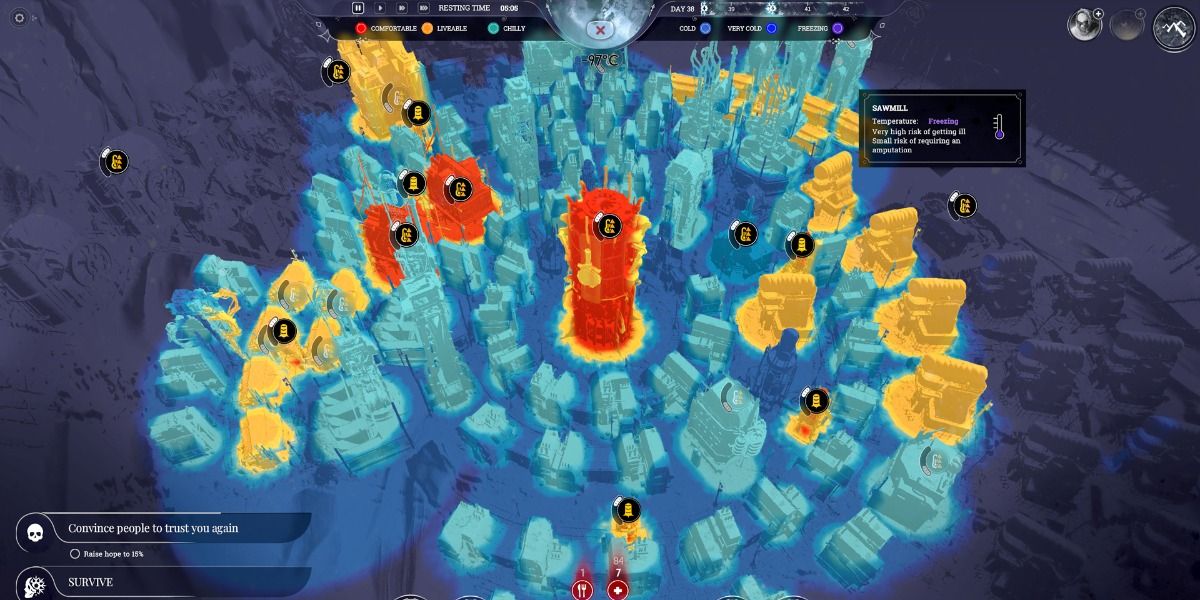 Since Frostpunk takes place in the middle of a volcanic winter, temperatures are really, really cold (and, as the game progresses, it’ll get colder). So naturally, you need to find ways to keep your people warm and healthy. Why? Well, if people live or work in a place where conditions are not livable, they’ll start getting sick.

Sick people can be treated in Medical Posts, but this will take time, and the post only has five beds. Sure, there are more advanced buildings like the Care House or the Infirmary, but prevention is better than treatment when it comes to sick people.

Those who are sick will miss work while treated, and those who are left without treatment will evolve into gravely ill patients, meaning they’ll need extra care or will die (and, depending on the laws you’ve signed, gravely ill people will become a burden or cripples who’ll need a factory that can provide prosthetics for them). Either way, having your population get sick will take a hit on productivity.

To avoid this chaos, make sure all your tents are within the range from the steam tower, research heaters for workplaces, and build Steam Hubs in places the generator’s range won’t get to. 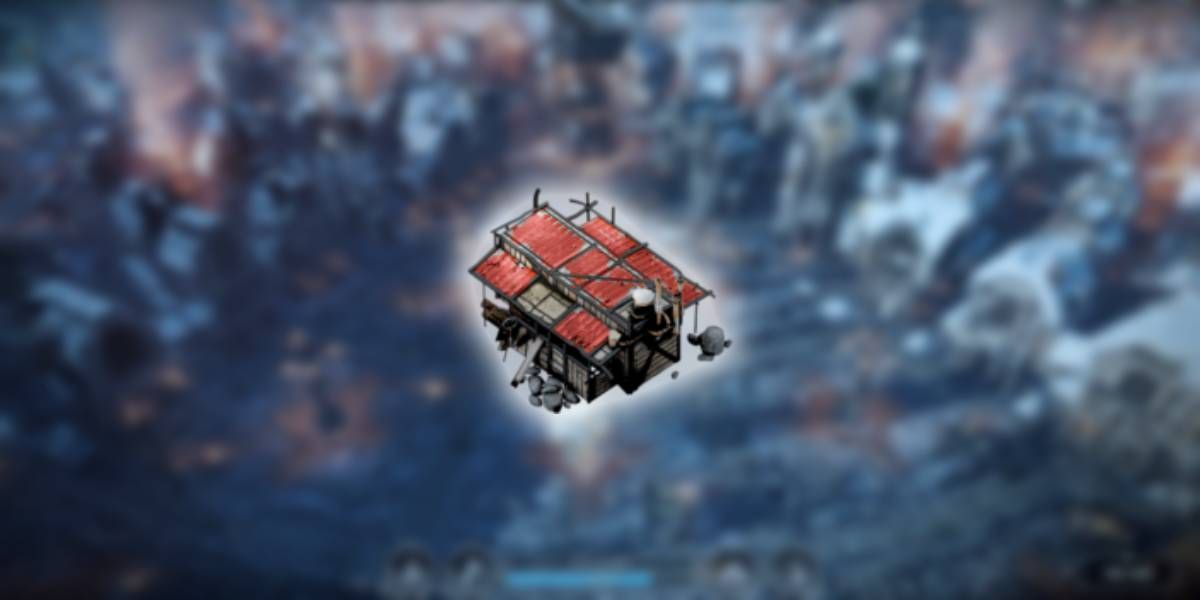 Gathering resources is as easy as selecting a few workers and sending them to the resource deposit or the building that’s extracting them. However, this means the workers will be defenseless against the harsh environment, so they might end up getting sick.

To avoid this, consider building a Gathering Post. These buildings will provide a warmer and safer workplace for your people. But this isn’t its only advantage; you see, Gathering Posts have a radius, and ANY resource deposit the fall inside it will be gathered. This means that you can employ ten people to work in the gathering post instead of using 15 people to collect only ONE type of resource.

Use Automatons With Discretion 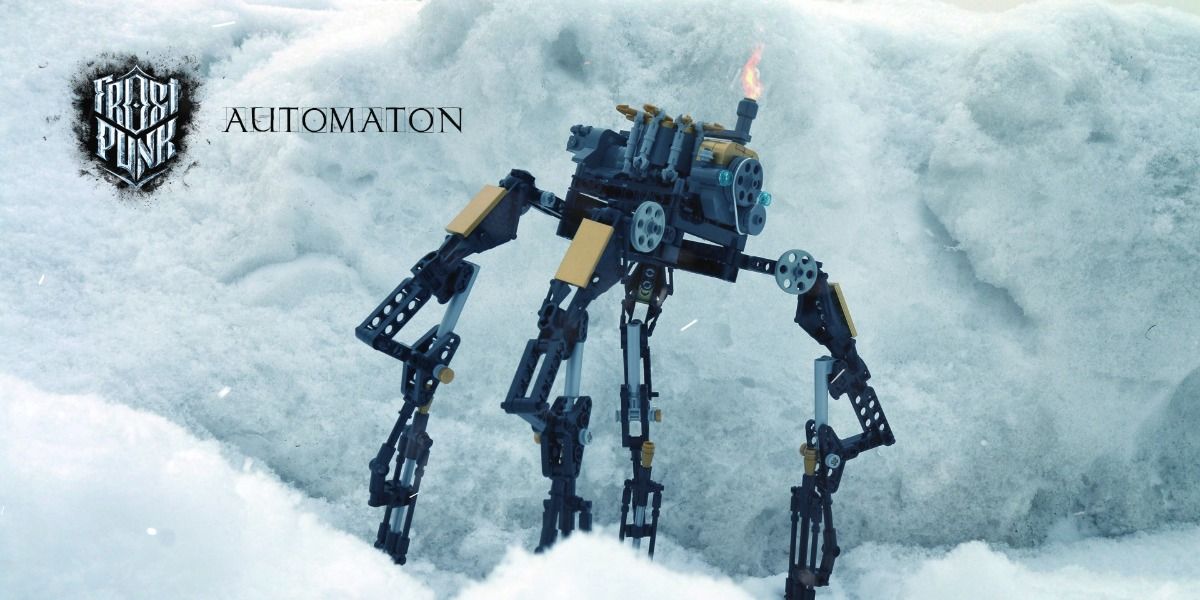 While playing, you’ll eventually find an Automaton. These huge machines can work for 24 hours and aren’t affected by the harsh conditions. Sounds pretty good, right? The downside is that you have to choose between employing workers or engineers in specific buildings, and Automatons will only work at 60% efficiency. Sure, there are upgrades you can research and events that will trigger that can raise these efficiency levels, but it’ll take time and resources to get to that point.

Still, automatons are really useful for gathering resources all day or aiding in buildings where you’re short in staff (like Medical Posts). You should employ these robots in facilities that aren’t a number one priority, like those that can produce Coal, and instead use it in other places like steelworks.

You’ve Got Limited Manpower, Use It Well 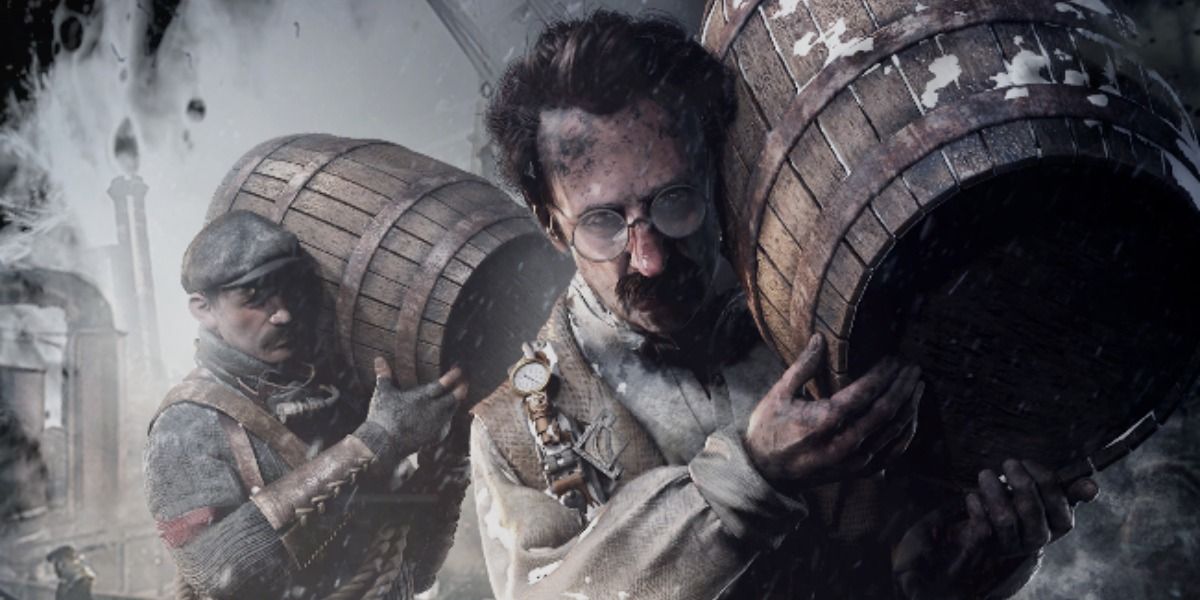 There are two types of people who can work, Workers and Engineers. Usually, you’ll start the game with more Workers than Engineers with the possibility of acquiring more through Scouting. Some buildings can employ both while others, like Workshops or Medical Posts, only require Engineers.

So before you and task your Engineers with collecting Coal or Wood, see how many people you have available and where they will work better. 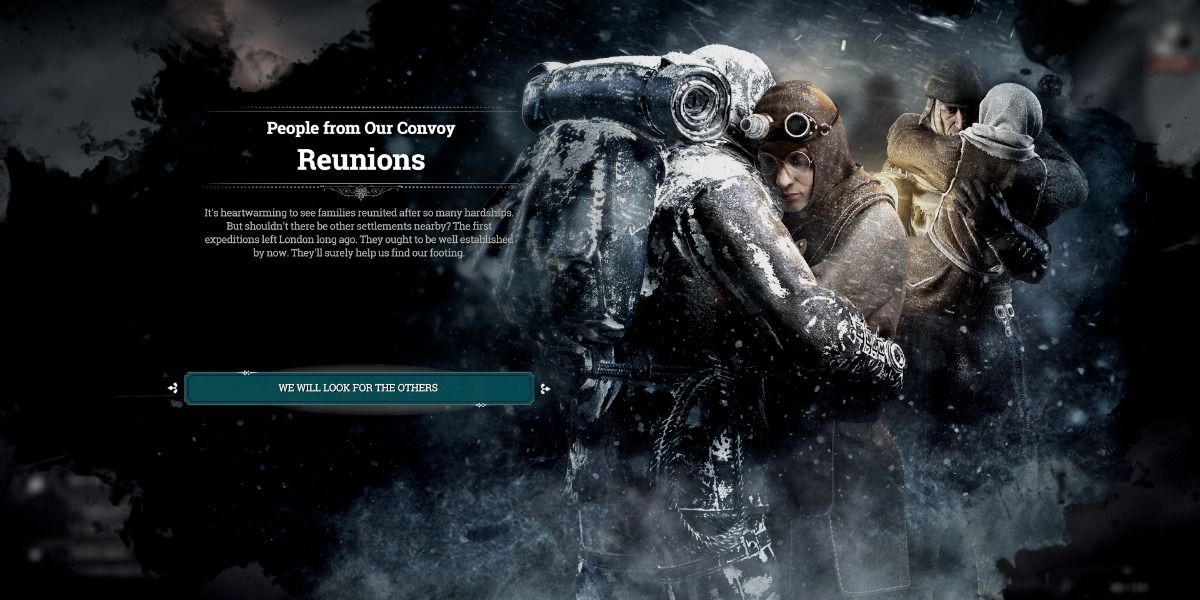 Once you’ve unlocked Scouting, the chances are that your Scout will come across some groups of survivors; you can take these people into your city, where they’ll become part of the population. This is great because the more people you have, the more people you can put into work.

However, bringing in new folks also means new mouths, the feed, and bodies to shelter. What you should do is prepare for these newcomers before they arrive in your city. So, as soon as you know they’re on their way, build some tents in warm areas as well as an additional Hunters’ Hut so you’ll have more food rations.