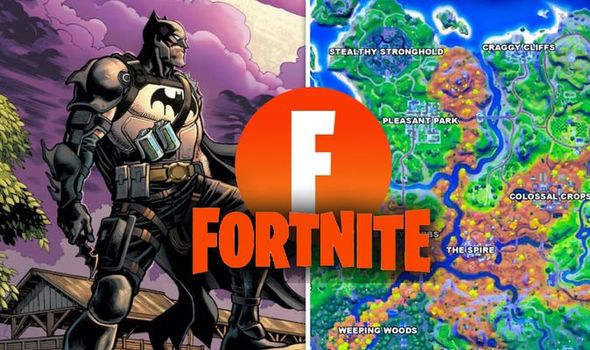 Fortnite fans have been given a first look at the Batman comic book crossover.

The Fortnite X Batman comic is an ongoing series in which the Caped Crusader is drawn into the world of Fortnite.

Fans of the comic can even unlock exclusive in-game items by redeeming codes available with each issue.

Needless to say, the release of a Fortnite comic featuring Batman has led to increased speculation that more DC characters and locations will come to Fortnite.

Judging by the latest images from the Batman Zero Point comic, fans may already have an idea about what to expect in Season 6.

The image at the top of the page, for example, is likely what the new Batman Armoured skin will look like when it appears in the game.

The tweet below, meanwhile, shows off Batman’s makeshift Batcave within the Fortnite universe.

It’s highly likely that the Batcave will be added to the map during the course of the seasom, so keep an eye out for it.

Based on the surrounding trees and the log cabin, there’s a good chance it will show up around Weeping Woods or south of Slurpy Swamp.

There’s also speculation that Deathstroke will appear in Fortnite, while Catwoman could get a new look.

With Season 6 starting just a few days ago, there’s plenty of time for Epic to add the rumoured DC items into the game.

Expect even more hints and clues to appear as more issues of the Fortnite X Batman comic are released.

“A crack splits the sky above Gotham City… a tear in reality itself. This rift pulls the Dark Knight into a bizarre and unfamiliar world, with no memory of who he is or where he came from…Batman has been drawn into Fortnite!” reads the official comic book description.

“As he fights to recall his past and escape an endless loop of chaos and struggle, he’ll come face-to-face with the likes of Renegade Raider, Fishstick, Bandolier, and more.

“While the world’s greatest detective strives to make sense of this strange new world, he’ll uncover the shocking truth about the Island, what lies beyond the Loop, and how everything is connected to the mysterious Zero Point.

“Batman/Fortnite: Zero Point uncovers secrets never before revealed in game or anywhere else!

“Every fan of Batman, Fortnite, stunning art and edge-of-your-seat excitement won’t want to miss the Caped Crusader facing off against Fortnite champions on the Island, in a desperate attempt to save not only himself, but other familiar faces from the DCU…and perhaps the Multiverse itself!”

Judging by the description of the comic, Batman could be involved with the end of season event later this year.

Fortnite Season 6 is pencilled in to end on June 8, although it’s likely to be extended by a few weeks closer to the time.