The Fortnite x Star Wars event has been and gone, players got the chance to watch an exclusive clip from the upcoming Rise of the Skywalker film.

But now is when the fun can begin, with Epic Games now rolling out a series of Star Wars-themed challenges.

We'd like to pretend they had some really cool snazzy name, but they're simply called 'Fortnite Star Wars challenges' which is to the point we guess.

We bet the empire would proper love that.

You'll find the list of those challenges just below

For the purpose of this page we

Anyway, for the purpose of this page, we're focussing on just one of the above challenges to show you what you need to do. You probably knew that though, if you clicked through Google.

So let's stop waffling and get to it.

How to raise your banner to capture TIE fighter crash sites

Now, first up, when you find a TIE fighter crash site, you'll be ambushed by First Order stormtroopers. Which is good in one sense because then you can also complete one of the other challenges.

They are much harder than the monsters from Fortnitemares though, so make sure you're armed so you can defend yourself.

Kill the stormtroopers and then approach the centre to find a flag. Now just hit the right button to claim the flag and your new banner will raise up.

And you've done it. There's plenty to be found across the whole map

So far players have found 5 locations dotted across the game's map.

Should it help, thank the guys over at www.progameguides.com for creating the map just above showing all five locations in the event you get a little lost.

And if you want some extra hand-holding, you can also check out the below video from HarryNintyFour who shows exactly what you need to do in order to complete this challenge.

Just make sure that you finish each game otherwise your progress won't count. 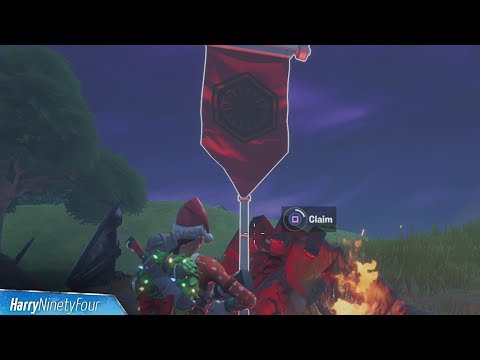 Last Chance To Save On Fangamer's Persona 5 Royal Merch

Saints Row: The Third remaster coming to PC, PS4, and Xbox One
News

This Week In GTAV Online (4/5-4/11)
We and our partners use cookies on this site to improve our service, perform analytics, personalize advertising, measure advertising performance, and remember website preferences.Ok