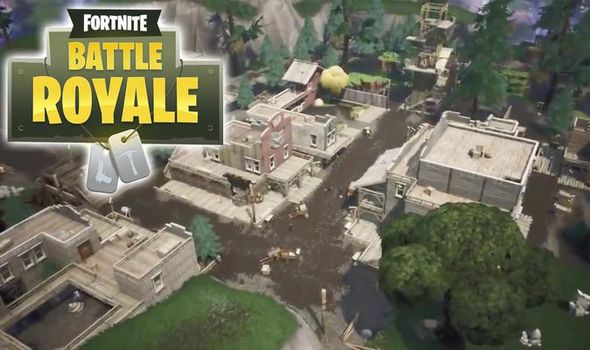 Fortnite map has received a big change with the new Tilted Town location launched for season 10 of Battle Royale.

Fortnite season 10 was released last week, with Epic Games promising an evolving map where the world players see one day could be different the next.

And the first signs of this was seen today with the Neo Tilted location getting replaced with the brand new Tilted Town POI.

This new Fortnite season 10 location popped up after a Rift Zone turned Tilted into the Wild West settlement that stood in the same spot years ago.

And, in a new twist, Fortnite players will not be able to build or harvest in this new location.

The Tilted Town location was introduced to Battle Royale as part of the Fortnite V10.00 content update.

In the patch notes Epic Games said: “Neo Tilted is not so neo anymore.

“A Rift Zone has turned this location into what it was many years in the past: a Wild West settlement.

“What’s even wilder than this western twist is that building and harvesting are prohibited!”

It also looks like Paradise Palms will be seeing some major map changes during Fortnite season 10.

Players discovered clues that suggested the Moisty Mire location could be making a return to replace Paradise Palms.

Trees were spotted sprouting out of the ground in Paradise Palms, while the sign outside the POI appeared to be hinting at the Moisty return.

The background in the Paradise Palms sign now looks almost identical to the swamp that originally sat in the south-east corner of the Battle Royale map.

And recently dataminers have discovered files which back this up and reveal other locations are set for a return.

It also looks like Flush Factory and Tomato Town could be making an appearance during Fortnite season 10.

HYPEX tweeted: “New challenge was added in season 10 called ‘Quest_BR_SprayVehicles_DifferentLocation’ it’s a placeholder I think, and in it it has all the POIs where you need to spray, GUESS WHAT, me & @xkleinmikex found these!!! (Also flush factory & tomato town)”.

HYPEX also discovered datamined files which might relate to another new concert that will be held in Fortnite.

The Fortnite leaker speculated that the new concert could be featuring MAJOR LAZER.

HYPEX tweeted: “There might be another concert in fortnite, Possibly with @MAJORLAZER, and maybe with Marshmello again too”.

They added: “So y’all remember the “MajorLazerDance” emote that was added in 9.4 then removed in v10? It didn’t have animations so we couldn’t leak how to looks like, but in v10 update those files and many more got updated and those were used in the Mello event.. maybe a new concert? or POI ?”