Fortnite is still one of the most popular games in the world, but it has definitely lost some of the unprecedented momentum that it had throughout 2018. This led to League of Legends reclaiming Twitch’s most watched game, according to data-tracking service Arsenal.gg. Fortnite finished at No. 2 with its hours watched dropping 28% year-over-year. Here’s the full chart from Arsenal and broadcasting-production service StreamElements: 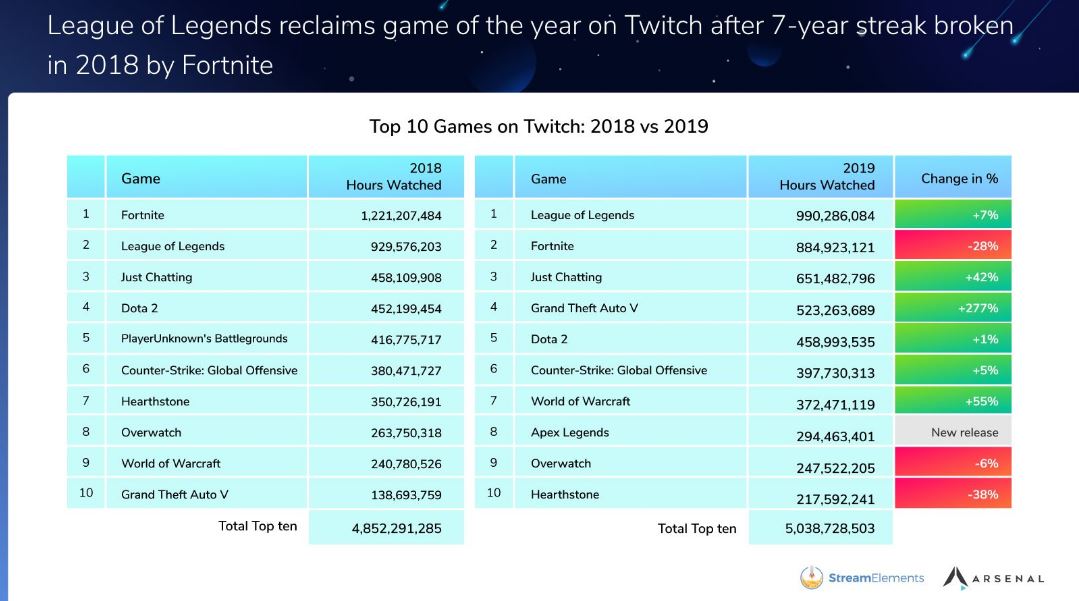 No game had more than a billion hours watched — although League is close. But this doesn’t mean that Twitch viewership is declining. Total hours watched is up for the site 20% year-over-year. Viewers are just showing up for a wider variety of content, and you can see that reflected in the top 10. League of Legends grew 7% compared to the same period from the previous year. But other games and categories are growing even faster. Just Chatting was up 42%, for example.

Fortnite could have a resurgence on Twitch like other older games

Another major trend is that more established games found even bigger audiences in 2019. The Dungeons & Dragons actual-play category was up 26% compared to 2018. World of Warcraft was up 55% thanks to World of Warcraft Classic. And Grand Theft Auto V grew a massive 277% from 139 million hours watched to 523 million hours.

This shows that games stick around and grow overtime as streamers learn how to present them to viewers. That process of finding a voice can take some time, but it’s working out well for a lot of games.

This is why I wouldn’t count out Fortnite. While it is down from 2018, that’s only natural. Fortnite in 2018 was one of the best years any video game has ever had. But it’s totally possible the game could regain or even surpass its early popularity on Twitch as new streamers come in and figure out new ways of using it to entertain fans.