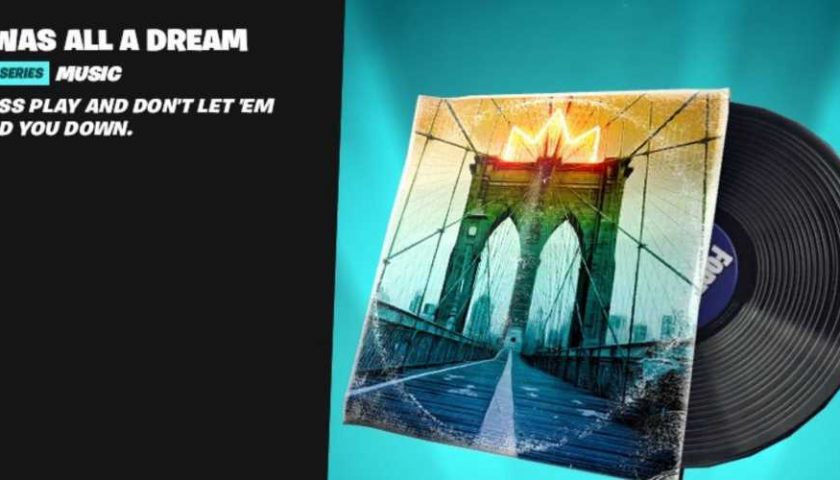 This article is dedicated to all the teachers that told me I'd never amount to nothin'. So I paraphrase from the Notorious B.I.G., aka Biggie Smalls aka Christopher George Latore Wallace aka Biggie, from perhaps his best known track 'Juicy'. Now, Fortnite fans will have the chance to listen to this sublime piece of hip-hop history, introducing younger players to the lyrical genius of Biggie while older ones might light up listening to that incomparable flow.

According to reputable Fortnite news sharers on Twitter, the final encrypted file in v21.10 was decrypted and dataminers discovered the last secret. It might not have been all that fans were hoping for, but new music packs are a nice addition, and this one adds a legendary rapper.

The Notorious B.I.G. Music Pack is called 'It Was All A Dream', which is taken from lines in Juicy, and it's available via the Fortnite Chapter 3 Season 3 Item Shop. Once there, players will find the Music Pack along with some new skins and in-game items. The new Music Pack costs 200 V-Bucks.

Applying these Music Packs will play the song or music while players are in the game's lobby and following Victory Royales. Music Packs have been a feature of Fortnite for a while now and they can be bought from the Item Shop and even gifted to Fortnite pals (and received).

Dataminers had been eager to find out what was exactly in the encrypted file that had been added to Fortnite Chapter 3 Season 3 with update v21.10. It generated a fair bit of speculation, as is common with the Fortnite community since the game regularly hosts new skins, items, and characters, but now we know that it was this Music Pack thanks to the mining efforts.

The Notorious B.I.G. is one of hip-hop's most influential artists with hits including Big Poppa, Hypnotize, Mo Money Mo Problems, among others. The New Yorker was active in the 1990s, but was killed in Los Angeles in a drive-by shooting in 1997 at the tender age of 24. His murderer remains unidentified.