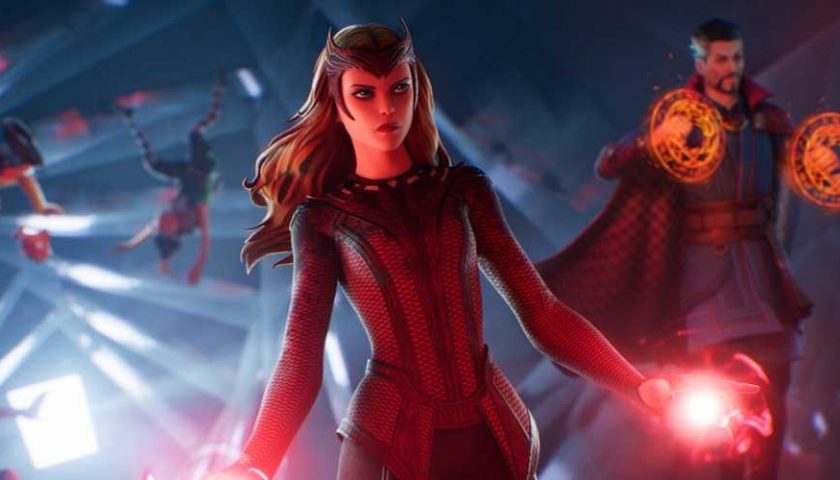 Dr. Strange in the Multiverse of Madness is now in cinemas, throwing the MCU even further into disarray as the rulebook has been torn up and now, pretty much anything can happen. Unlike Marvel's Avengers, Epic likes to celebrate the arrival of new content in the MCU by adding something to Fortnite, and today is no different. Scarlet Witch is available to buy through the Fortnite in-game store right now.

The arrival of Wanda Maximoff in The Loop was actually leaked earlier this week. Not by dataminers, as is usually the case when it comes to Fortnite, but by Epic. The Fortnite devs accidentally showed off a first look at the game's take on Scarlet Witch from behind via some creative item documents. What that unintentional sneak peek didn't reveal is whether Fortnite's Scarlet Witch would include her MCU likeness.

Now Scarlet Witch has officially been revealed and added to the game, we can see that, unlike Tom Holland and Zendaya, Elizabeth Olsen has not become a part of Fortnite's canon. The outfit is very close, if not identical to the one Scarlet Witch wears in the MCU, though. A post on Epic's website also details everything else that comes with the new hero if you want it all.

A cloak back bling is included with the outfit, both of which glow with chaos energy when dealing damage. You can turn that energy off by equipping an alternate outfit if you find it too distracting. Other Scarlet Witch items available now include a Chaos Hand Pickaxe (because why would Wanda need an axe to smash stuff when she has chaos magic?), and a Psychic Energy Manipulation Emote so you can show off that magic without actually dealing any damage.

Scarlet Witch joins what has become a massive roster of Marvel characters already residing in the Fortnite universe. Her Multiverse of Madness dance partner Dr. Strange was added to the game at the start of the current season, and Moon Knight also entered the fray a short while ago. Wanda debuts in a Fortnite currently filled with lightsabers and Star Wars characters. Those elements were re-added to the game earlier this week to celebrate Star Wars day and will remain in place until later this month.