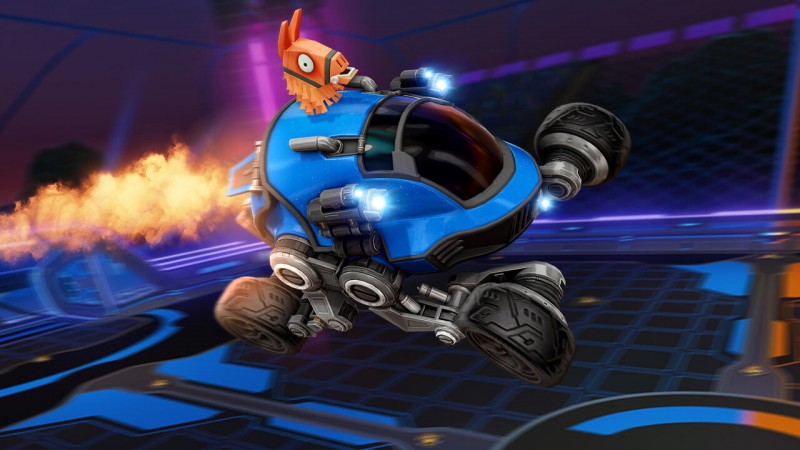 Last Fall, the first Fortnite and Rocket League Llama-Rama crossover event launched and brought the famous battle bus to soccer arenas everywhere. The free-to-play update required players to partake in a list of simple challenges to unlock fun rewards. In celebration of Rocket League’s upcoming Season 3, the second Llama-Rama crossover event is slated to launch soon and will bring interesting prizes to both Fortnite and Rocket League owners. The event runs from March 25 at 12 p.m. ET to April 9 at 4 p.m. ET.

A bevy of these new Rocket League challenges is, once again, relatively easy to complete so that you spend more time having fun with friends than struggling to complete your challenge checklist. Rewards range from copious amounts of experience points to exclusive cosmetics. By completing these  Rocket League challenges, you’ll also gain access to prizes in Fortnite – loading screens, lobby tracks, and sprays, among many other items. Original Rocket League cars will also be available in your Fortnite locker along with a “Lil’ Octane” traversal emote. You can read about all of that and get even more details in the new Llama-Rama blog post published on the Epic Games website here.

Finally, another concert is coming to Fortnite’s Party Royale. Grammy-nominated artist Kaskade will be performing his latest EP for the LLama-Rama event. Three showtimes are available: March 26 at 8 p.m. ET, March 27 at 9 p.m. ET, and Match 27 at 2 p.m. ET.

Speaking of crossover events, The 25th Tomb Raider Anniversary Celebration kicked off last week during the Square Enix Presents Showcase. Tomb Raider arrives (in some shape or form) to Ghost Recon Breakpoint and Final Fantasy Brave Exvius: War of the Visions. There are three Lara Croft skins in Fortnite, but Croft Manor will also appear in the game’s creative mode.