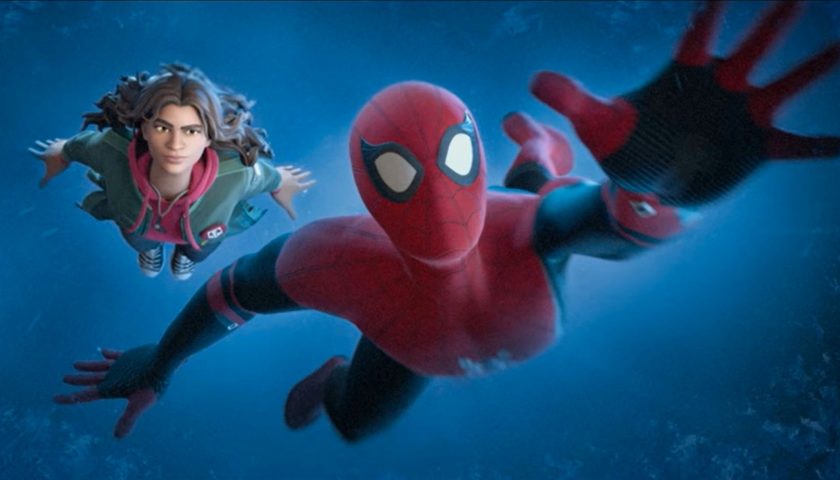 Fortnite kicked off Chapter 3 earlier this month by flipping the island upside down. That massive act, and incredible event, rid The Loop of the Cube Queen and her minions. It also included The Foundation removing his mask and revealing what we had all believed for a few seasons. That none other than The Rock was lurking underneath. He even cranked out a People's Eyebrow for good measure.

The long-awaited arrival of Spider-Man was the main event of Chapter 3's introduction though, and just in time for the arrival of No Way Home. Don't panic, you'll find no spoilers here. Just the news that Fortnite is getting two No Way Home-inspired skins to mark both the release of the movie in theaters and the start of 2021's Winterfest. You can check out the new skins in the trailer below hosted by Spidey and MJ.

The new Spider-Man outfit is the one Peter wears during the majority of the movie, and a built-in emote allows you to remove the mask and show off Tom Holland's beautiful Fortnite face. The other skin swinging into the Fortnite store today is Zendaya's MJ. Since the update will have gone live by the time you read this, both skins should be available now. It also means you'll be able to swing around the island as Spidey without having to reach page nine of the Battle Pass which takes quite a bit of grinding.

Peter and MJ join two other Spider-Man skins already added to the game. The regular red and blue suit, and also a symbiote suit which can be unlocked once you reach the final page of this season's battle pass. In terms of Winterfest, the addition of new Spider-Man cosmetics is just the tip of the iceberg. Starting today, players will get one gift per day to unwrap for the next 14 days. If you miss one or more days, don't panic, you can go back and open whichever gifts you missed right up until January 6, 2022.

No Way Home is going to do huge box office numbers around the world, so it only makes sense that any game with Spider-Man on its roster is going to want to capitalize on that. The web-slinger was added to Marvel's Avengers a few weeks ago, and the PS5 version of Marvel's Spider-Man is getting two new suits inspired by No Way Home.