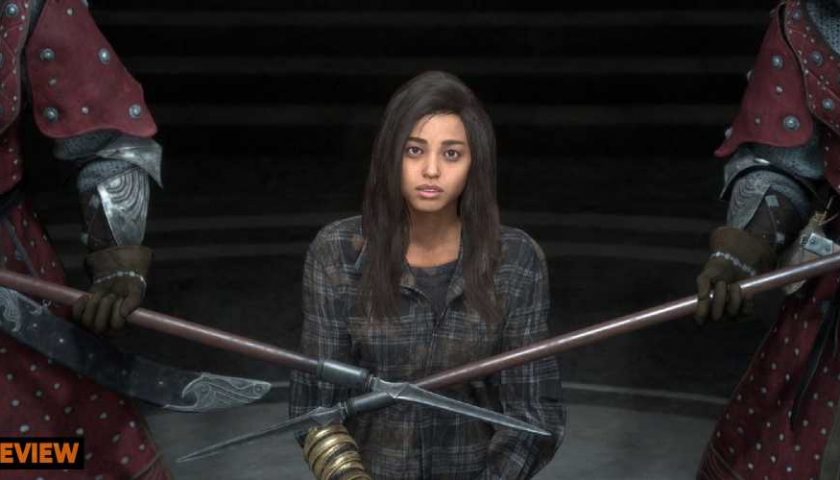 Forspoken is a fundamental evolution of everything Square Enix and Luminous Productions achieved with Final Fantasy 15. As polarising as that game came to be, it still managed to present a series of vast landscapes to explore, with movement and combat that inspired players to experiment before venturing off the beaten path in search of new discoveries.

It had potential, and one day I hoped to see it fully realized. Forspoken does exactly that, but I fear these steps forward won’t be enough to escape from its woefully corporate identity and fantasy world that inspires little more than annoyance. Frey Holland is an irksome heroine with a bitter personality playing on the worst kind of youthful tropes, depicted as a bad girl who got mixed up with some bad people and thus must be rough and guarded in ways that only the most distant boomers would view to be resonant. It isn’t, and even in a preview designed to ignore the narrative entirely, I couldn’t help but cringe my way through it all.

My preview took place in the illustrious region of Avaolet as I clambered across its mixture of foreboding swamplands, floating islands, and abandoned ruins. This world was once bustling with life, and it seems Forspoken is eager to showcase it in a state of disrepair. I only ever stumble across the occasional smattering of wildlife and all manner of creatures corrupted by The Blight – which is what the game calls its generic evil energy that has brought the realm of Athia to its knees. Super evil energy is doing super evil things, and we have super cool powers and a super cool destiny that means we are the only super cool person capable of saving the world. We’ve seen it all before, and so far Forspoken isn’t breaking new ground. Once the tutorial is over I’m encouraged to follow a linear sequence of objectives to reach my goal, which involve clearing areas of enemies or hunting down specific collectibles that fuel Frey’s eventual progression. This demo isn’t a real part of the game, instead designed for filthy games journalists like me to take it for a spin without the burden of storytelling and characters. From a purely mechanical perspective, Forspoken is already a treat to play.

You have a selection of different spell sets to choose from, each one sporting several accompanying abilities designed to be combined in a seemingly limitless number of ways. Some attacks can bind enemies to the spot with an explosion of vines, while I can then switch to a fire-focused spell before watching them erupt into a flurry of crimson embers. Everything about it feels crunchy, satisfying in how Frey leaps through the air and lays the smackdown on opponents ranging from zombified citizens to towering albino crocodiles. Using the generic melee and ranged attacks is certainly effective, but it turns combat into a predictable slog that results in diminishing returns as you stand there repeating the same tired cycle of commands until the day is won. Forspoken encourages you to experiment, and is infinitely more fun when you embrace that approach and do your best to mix things up. I was thrown into the game with a character who was already outfitted with equipment from much later in the story, and didn’t have the time to dive into exactly what each part of my arsenal meant and how the resources I kept earning in battle would factor into the overall experience. There is a lot of potential depth here, and most of it is stylishly executed.

Frey can equip new capes, nails, and accessories designed to provide welcome buffs to certain playstyles and abilities, such as elemental bonuses or rewards for approaching battles in a certain way. It’s loot-driven, a decidedly western influence from a JRPG that takes so much inspiration from the likes of Final Fantasy. But it somehow works, and I can totally see myself combing through it all in search of optional activities away from the main quest. If only to scrounge up random loot and clean up icons across an environment that adopts many of the design tenets we’ve come to expect from today’s open world games. There are a number of landmarks that Frey can ascend before scanning the environment for points of interest. Such things will be marked on your map, and then comes the freedom to tackle everything at your leisure. It’s all very Assassin’s Creed or Far Cry, but in the context of a JRPG with a more developed combat system and quirkier setting it somehow manages to feel a little more fresh. That doesn’t make it compelling, but there remains a gorgeous mystique to Forspoken’s world – even in this small sample – that I hope carries over to the full experience. Athia is a broken place that only a smattering of humanity still calls home, and Square Enix would be foolish not to lean into that potential as part of the wider narrative.

But will it? From the smattering of dialogue and general attitude found in this preview, I almost want to distance myself from Forspoken and never touch it again. It positively reeks of older writers trying to create a character they believe is independent, cool, and more than capable of standing up for themselves. Frey Holland is all of those things, but this personality is depicted through irksome comments in the middle of combat and an incongruous use of curse words and insults that have no place in a world like Athia. I’m not saying a fish out of water scenario like this can’t work, it has countless times before, but Forspoken is doing nothing new with it and leaning into tired cliches wherever possible. Its Whedonesque dialogue has already become a meme on the internet, and this reputation feels well and truly deserved. The majority of battles are filled with repetitive voice lines, ending and beginning with a foul comment or use of the f-word purely because we need to know how edgy badass Frey is for surviving in this harsh fantasy landscape. I haven’t even seen the full context of the story yet, but the general cadence of combat and how our heroine interacts with the world as we explore it already tells me a lot about how it will come to play out. This abrasive girl will come to learn some harsh lessons about responsibility as she is tasked with saving Athia from certain destruction, but won’t lose sight of her true self in the process.

I am already struggling to care, and so much of Forspoken feels like it was cobbled together in a boardroom filled with executives who have no idea what younger audiences want or how to properly represent them with a heroine who is capable of being so much more. At least she has a ‘hip-hoppy walk’ I suppose, and a British bangle who barks out tutorials and acts as a polite foil to her brash exterior that we’ve also seen millions of times before in the past. Square Enix wants to make Forspoken an adventure that appeals to a global audience, but in doing so it can’t help itself from becoming so damn predictable. Parkour is rad at least, and reminds me of Sunset Overdrive. By holding down the circle button, Frey is able to propel herself forward as she darts across the environment and climbs whatever obstacles happen to get in her way. Sadly, there is a real sense of automation to the mechanic, and it doesn’t feel like we are controlling our heroine so much as guiding her on a fairly strict railroad. Vertical structures such as larger towers and bridges provide an opportunity to test your platforming prowess, while utilising parkour in combat is an effective alternative to dodging, but the largely flat topography makes it feel like a glorified sprint mechanic more often than not. It’s too early to judge though, and I didn’t have nearly enough time to master traversal and make it my own. I also kept hitting invisible walls courtesy of the demo conditions, so it was far from ideal when it came to truly spreading my gamer wings.

I am conflicted about Forspoken. Its combat is great, its parkour is mostly satisfying, and there is so much across its open world I’m eager to uncover. But all this builds upon the foundation of a narrative and characters that so far I have nothing but derision for. The writing isn’t good, there is no beating around the bush about it. Even when I put aside the cringey dialogue, it is teasing a fish out of water storyline we’ve seen explored for decades now, and its misplaced assumptions about modern youth and what it means to be cool and rebellious in spite of your own existence is misplaced at best, and downright disrespectful at worst. It is a focus-tested homunculus of a game nobody asked for or even wanted to make.

Square Enix has felt increasingly out of touch for years, and I fear Forspoken could be its biggest misstep yet if it all falls apart. I pray it doesn’t, or I’ll just play it with the volume down.