We’re going to have to go way back to even begin to explain this one. We’ll start with Iron Soldier, a mecha game from the mid-90s that tried to cash in on the giant robot craze that was sweeping gaming thanks to the likes of Heavy Gear and MechWarrior. The first two games were for the Atari Jaguar, and when Atari went bankrupt, developer Eclipse Software Design wisely decided to make the third installment for the original PlayStation.

Unfortunately for them, Iron Soldier 3 couldn’t stand up to the likes of Armored Core, garnering poor reviews. It also came out near the end of the PlayStation’s life cycle, and many gamers had already moved on to the PlayStation 2.

To try and make back some of their development costs, the game was ported over to a relatively obscure new gaming platform from the early 2000s. It was called Nuon, and it was a valiant attempt from major appliance retailers to break into the gaming market.

Nuon was essentially a gaming platform that could be stealthily added to a DVD player. There were lots of Nuon-compatible devices and they all basically resembled DVD players from Motorola, Samsung, RCA, and Toshiba. The only difference was they came with a colorful game controller and could play games.

But not many games. Only eight games were made for the Nuon, and two of them would only work on a specific manufacturer’s Nuon-compatible DVD player. Iron Soldier 3 wasn’t one of them, but that hardly mattered as so few of the Nuon port versions were made that you basically can’t find them anywhere. 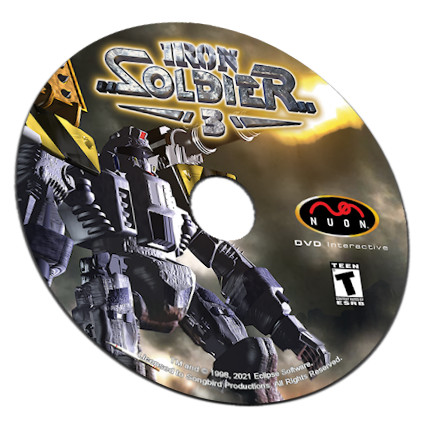 In the company’s latest news update, Songbird revealed that they’ve got plans to re-release Iron Soldier 3 for the Nuon in 2021. They’ve acquired the official license and everything, and have plans to release an actual DVD disc with a 28-page manual and case.

Of course, to play Iron Soldier 3, you’ll need an actual Nuon DVD player, and those can be pretty hard to come by. But if you got one, this is probably one of the best games for it.