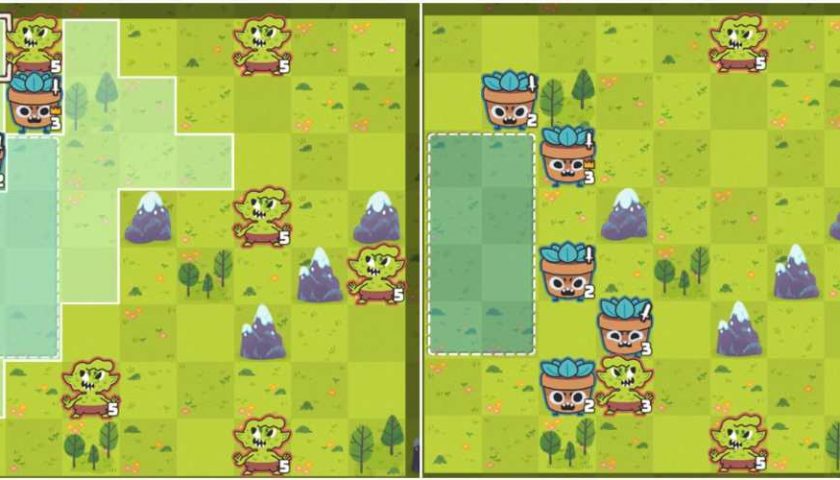 Floppy Knights has a lot of challenge levels. These levels each have a unique set of requirements to beat, and each one also provides you with a premade deck. In some instances, these are simply puzzles – you have one turn to win with a set starting hand. Other times, you need to work with RNG to overcome the challenge.

Kickers vs Gobs is the latter. You have a small deck, and that deck is very much tailored to provide an interesting challenge, but you won’t draw your cards in the same order every time you play. This makes it impossible to do a step-by-step guide, but that doesn’t mean we can give you the secret to winning this challenge. 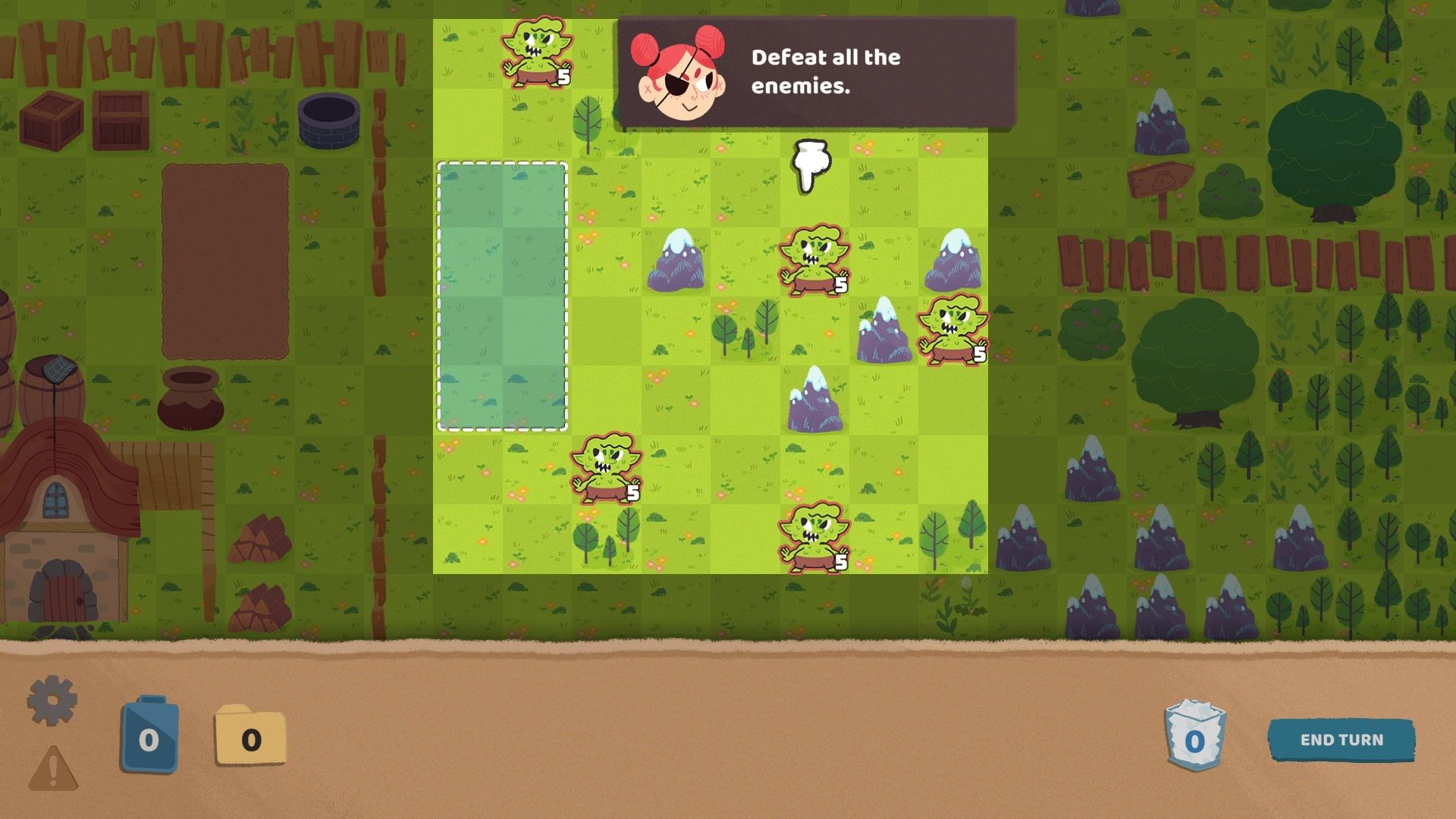 The objective of this challenge is to simply kill all enemies. That’s it. There is no failure state outside of your Commander dying. This means that you can take as long as you want, and you can sacrifice as many units as you need. It’s a very forgiving challenge, but there are ways to get through this with zero casualties, and without taking an exorbitant amount of time. 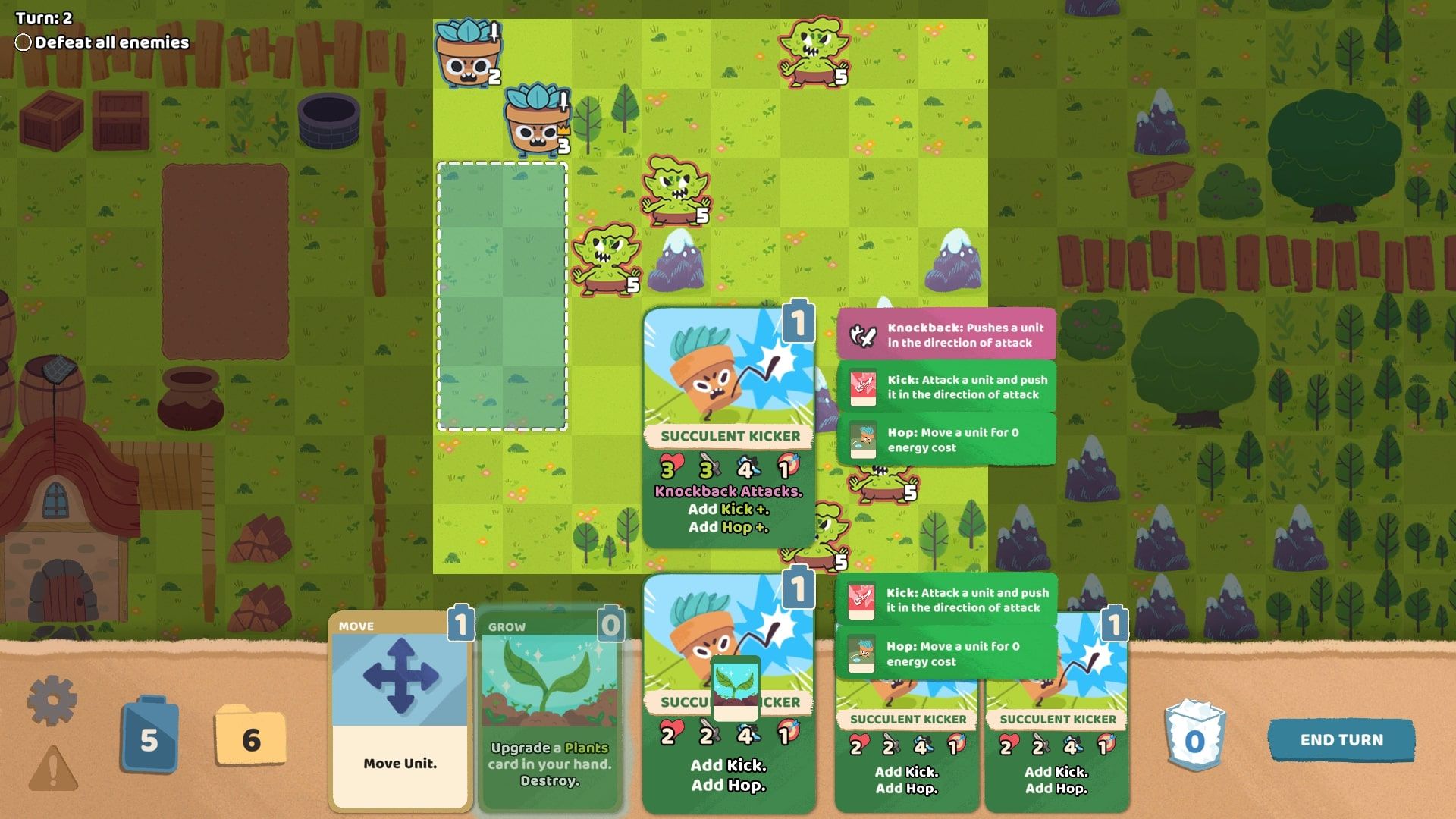 This deck is very basic, but it also has a few tricks that can lead to some pretty impressive turns. Your deck consists entirely of basic move cards, Succulent Kickers, and a single Grow card. Your Commander for this deck is a buffed Succulent Kicker, and as per usual, if it dies, that’s game over.

So what are the strengths of this deck? Well, the Succulent Kickers oddly enough. When you summon a Succulent Kicker, which only costs 1AP, you will also create two new cards. These are Kick and Hop. Kick is an attack card, and Hop is a movement card. Both of these cards are destroyed when played, but cost 0AP.

Considering a basic Movement and Attack card each cost 1AP (so 2AP in total), being able to summon a monster, move, and attack, all for 1AP, is quite the steal. If you have enough Succulent Kickers in your hand, you can have some seriously impressive turns as a result.

How To Defeat Goblins Effectively 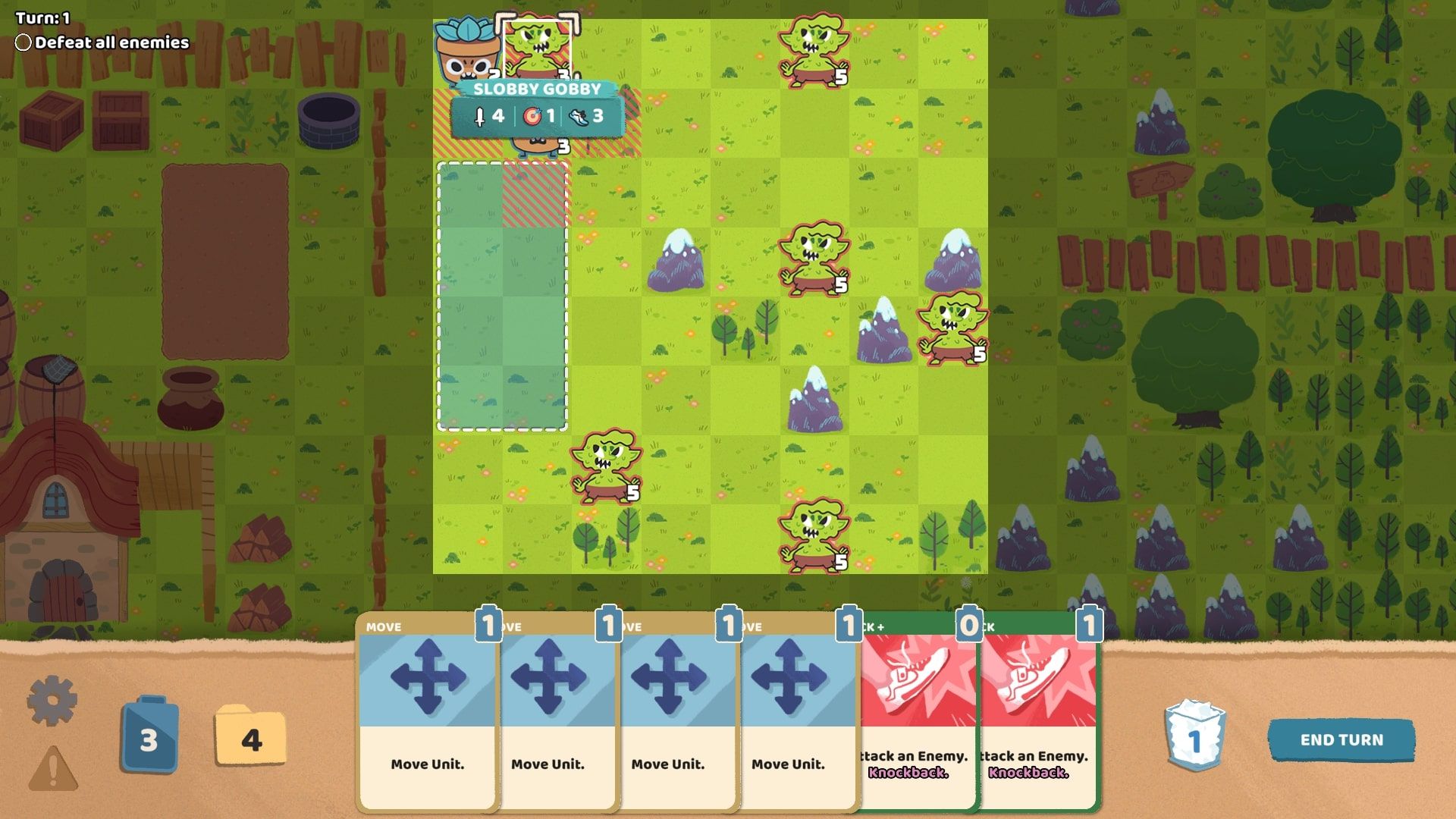 The key to this challenge is to kill every Goblin on the board effectively. They have 5HP, which is awkward, but you have ways to make that much less awkward. Firstly, your Commander has 3ATK, as opposed to the usual 2ATK. Your Commander, teaming up with a regular Succulent Kicker, can kill a Goblin in two attacks – not three.

Following on from that, your deck has one Grow card. You can use this to upgrade a single Succulent Kicker in your hand, essentially duplicating your Commander (without the negative of death being Game Over, of course). This means you can team this buffed Succulent Kicker with a regular one, and have another hit squad capable of two-shotting Goblins.

Unless you need the extra movement or attack, then you should probably save your extra Succulent Kickers until you can summon a buffed Succulent Kicker, otherwise, you will be very inefficient.

One thing to note about the Commander and buffed Succulent Kicker – is they also gain Knockback on their attacks. This is, for the most part, a bad thing. You don’t want to kick your enemy away from your ally. Because of this, make sure you attack with your weaker Succulent Kicker first and then finish them off with your stronger one.

How To Position Your Units 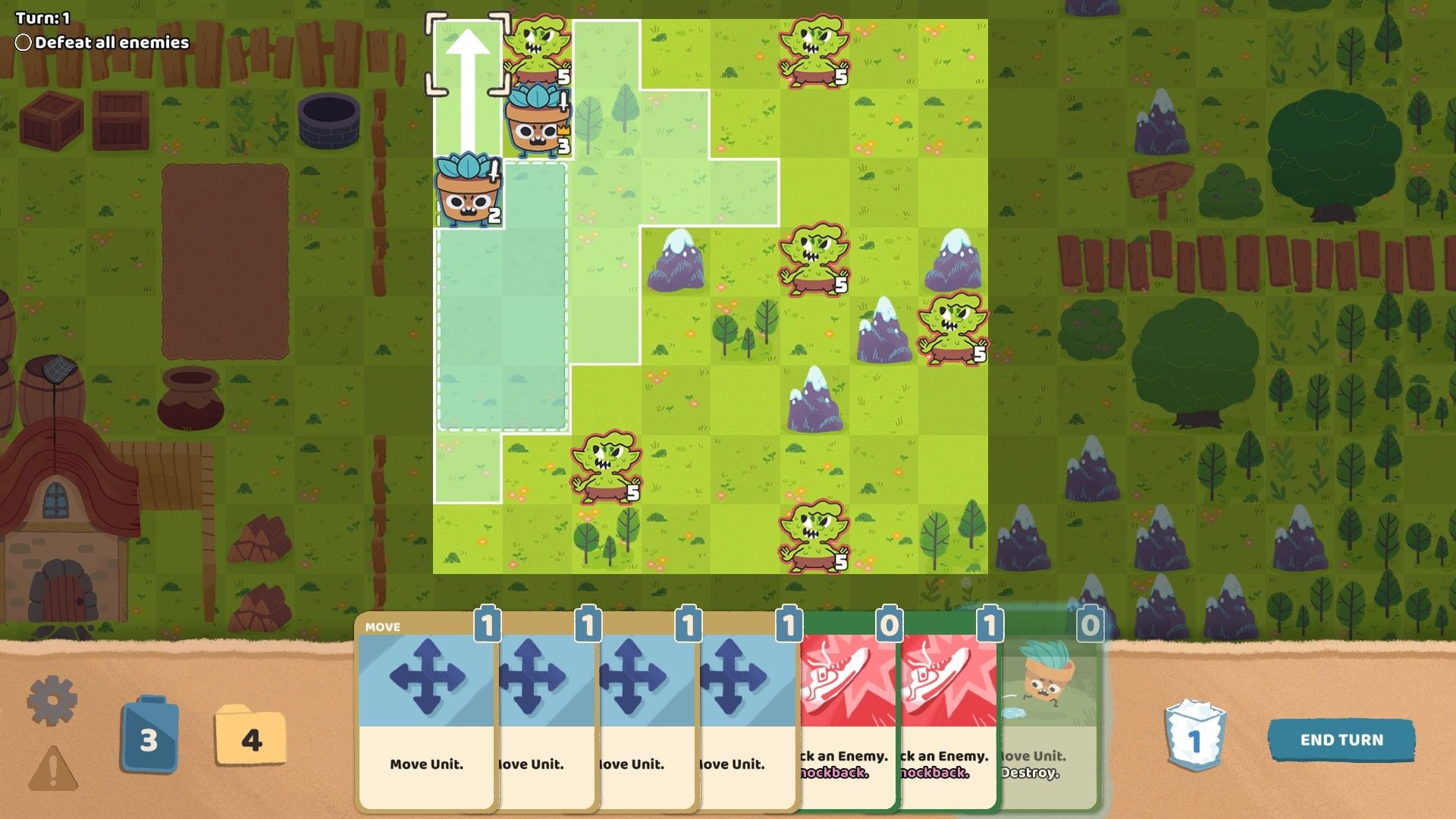 There are two stages to positioning – deployment, and in-game. 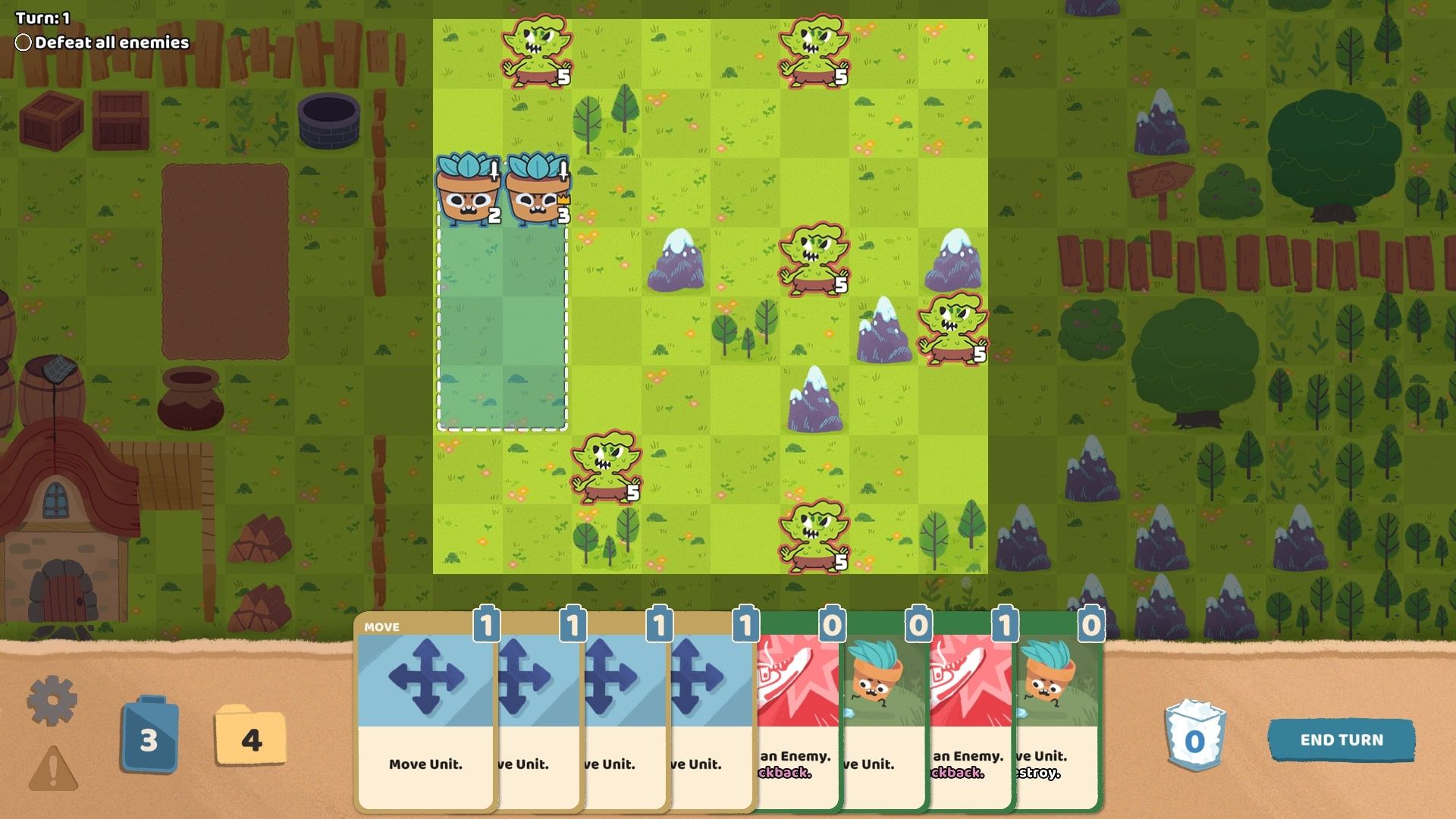 When it comes to deploying your Succulent Kickers, you want to focus on the top or bottom portion of the map. Why? This limits what the enemy can do. If you deploy in the middle of your starting area, you risk being surrounded. If you start on an extreme edge, you can crush one side, and then move on the other when needed. Remember, there is no turn limit in this challenge.

The best place to start is the upper portion of the map. There are fewer enemies here, and since you have your Commander deploying first, you don’t want to end up in a situation where your Commander is stuck and unable to escape from a large group of enemies. The top position is much safer. 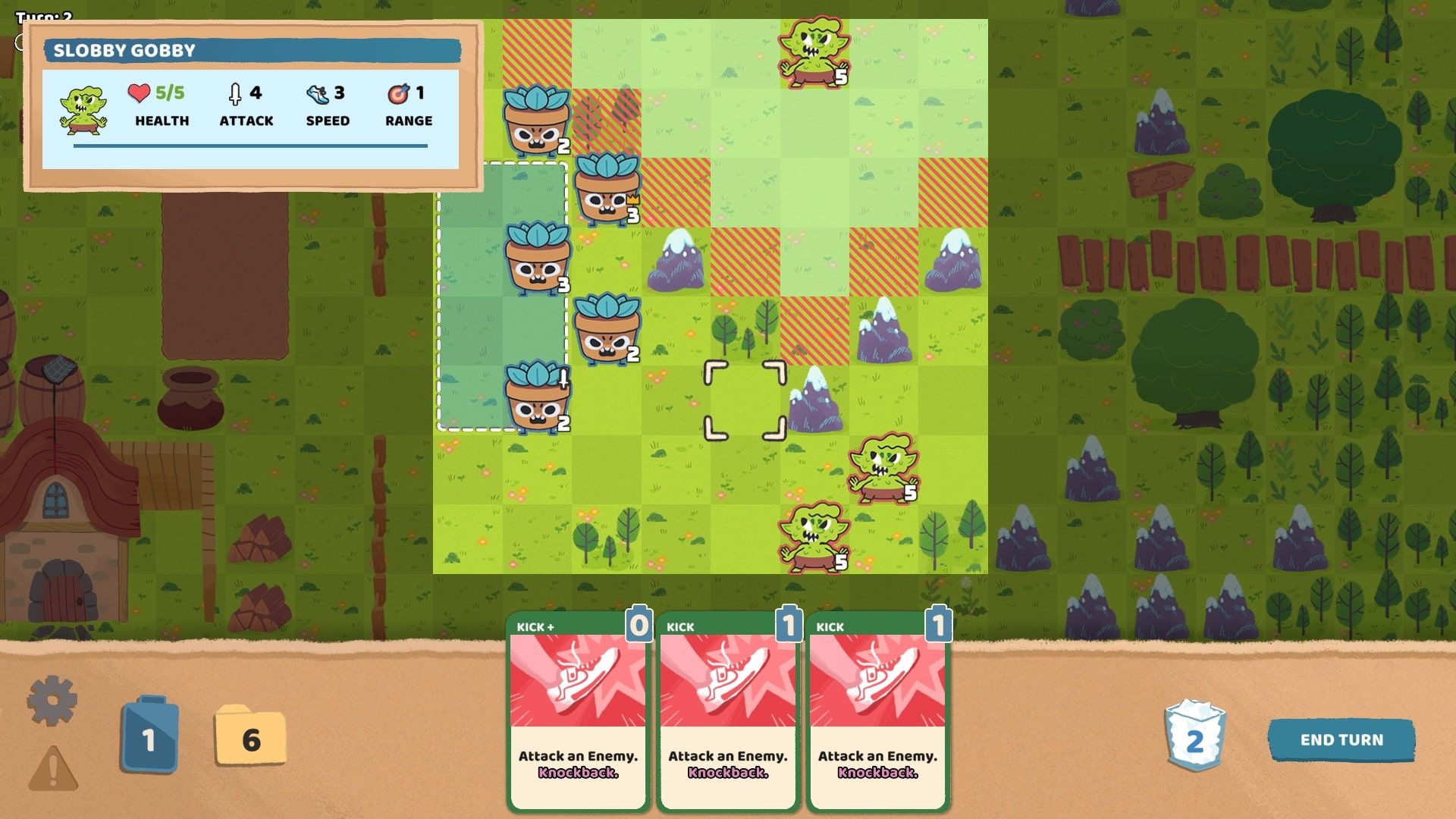 The key to making the most of your units is to position in such a way that the enemy can’t attack you back. Whilst there is no downside to losing units in this challenge, the ideal scenario is keeping all of your guys alive.

Because of this, you need to make use of the Threat Range checker (right-click on an enemy). You don’t want to be in an enemy's red zone. The only exception? If you can move into a bad position to kill a Goblin, whilst having the cards and AP to move to safety. Sometimes you won’t draw the hand you need to do this, and if that is the case, don’t do it. Instead, position yourself safely and wait for another turn. 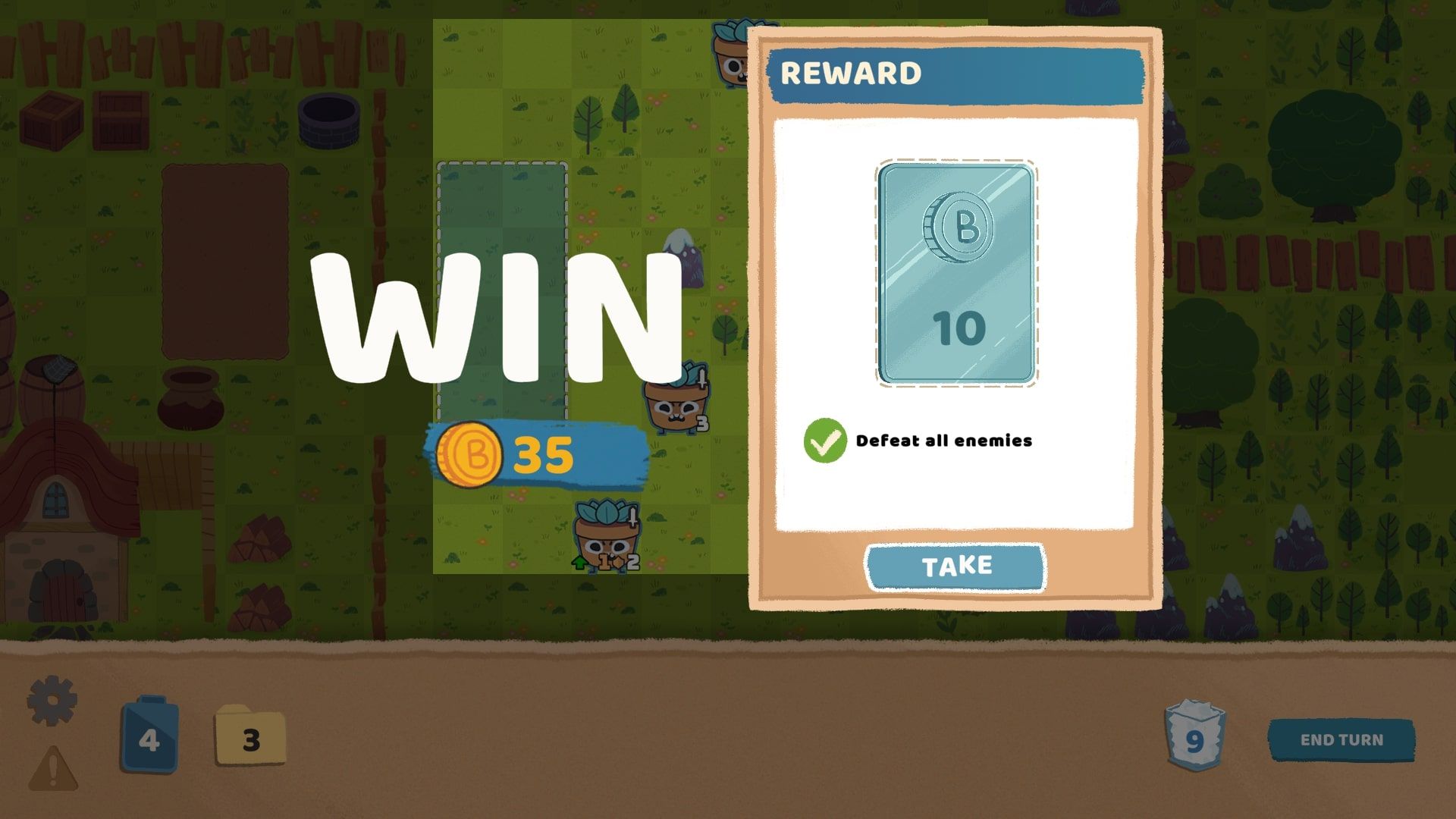 Your reward for completing this challenge is 10 Coins. You can repeat this Challenge to gain this reward repeatedly if you want. Make sure to use your newfound wealth to craft some new cards for the main campaign.