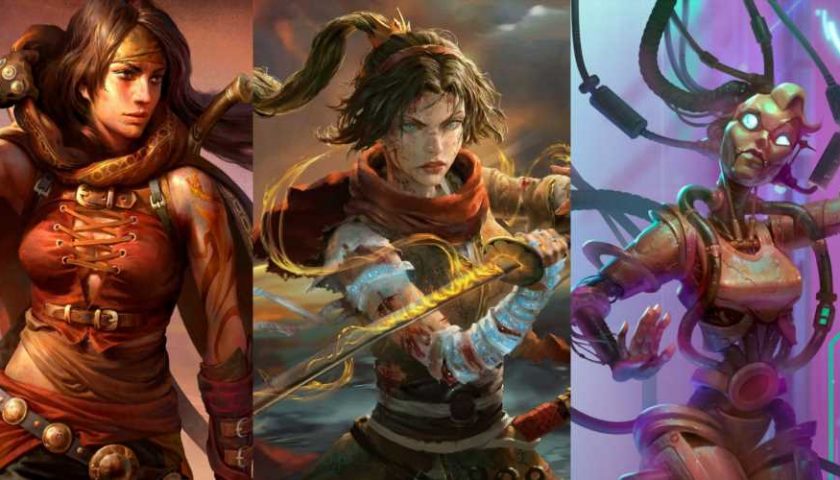 Flesh and Blood is a TCG with a variety of exciting classes that players can assemble to create unique and destructive builds. At the same time, most of the process of building your class is spent choosing weapons, equipment, attacks, and defenses. An often overlooked part of Flesh and Blood is choosing item cards.

From going an extra turn to blocking attacks, there are plenty of helpful item cards to help make the ultimate deck. But like all TCGs, making sure to pair the right cards together to play casually or competitively is essential. 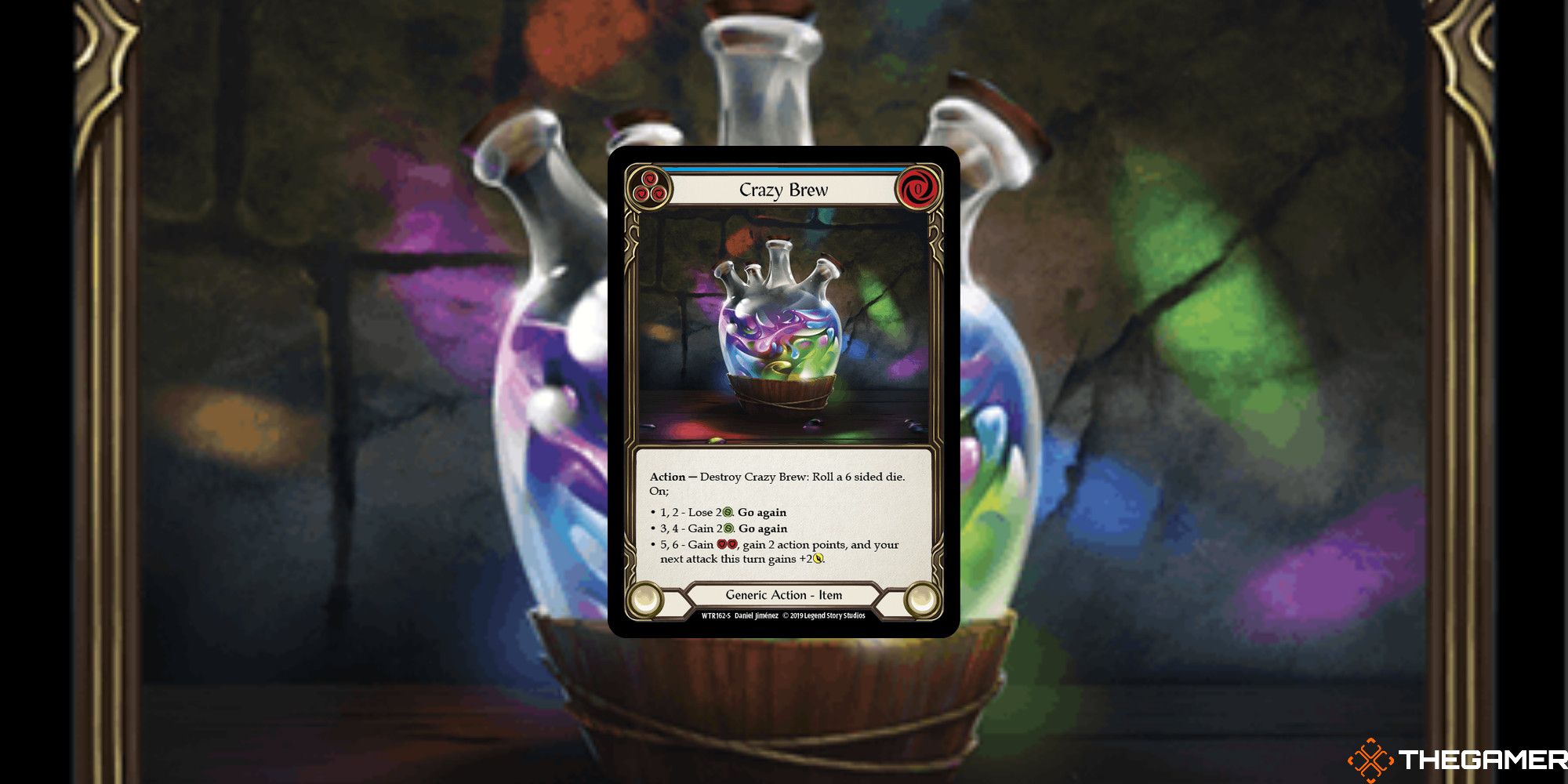 The best part about this card is that it can be a game changer if used in the right situation with luck on your side, as the best roll can increase your damage and allow for more cards placed on the table. 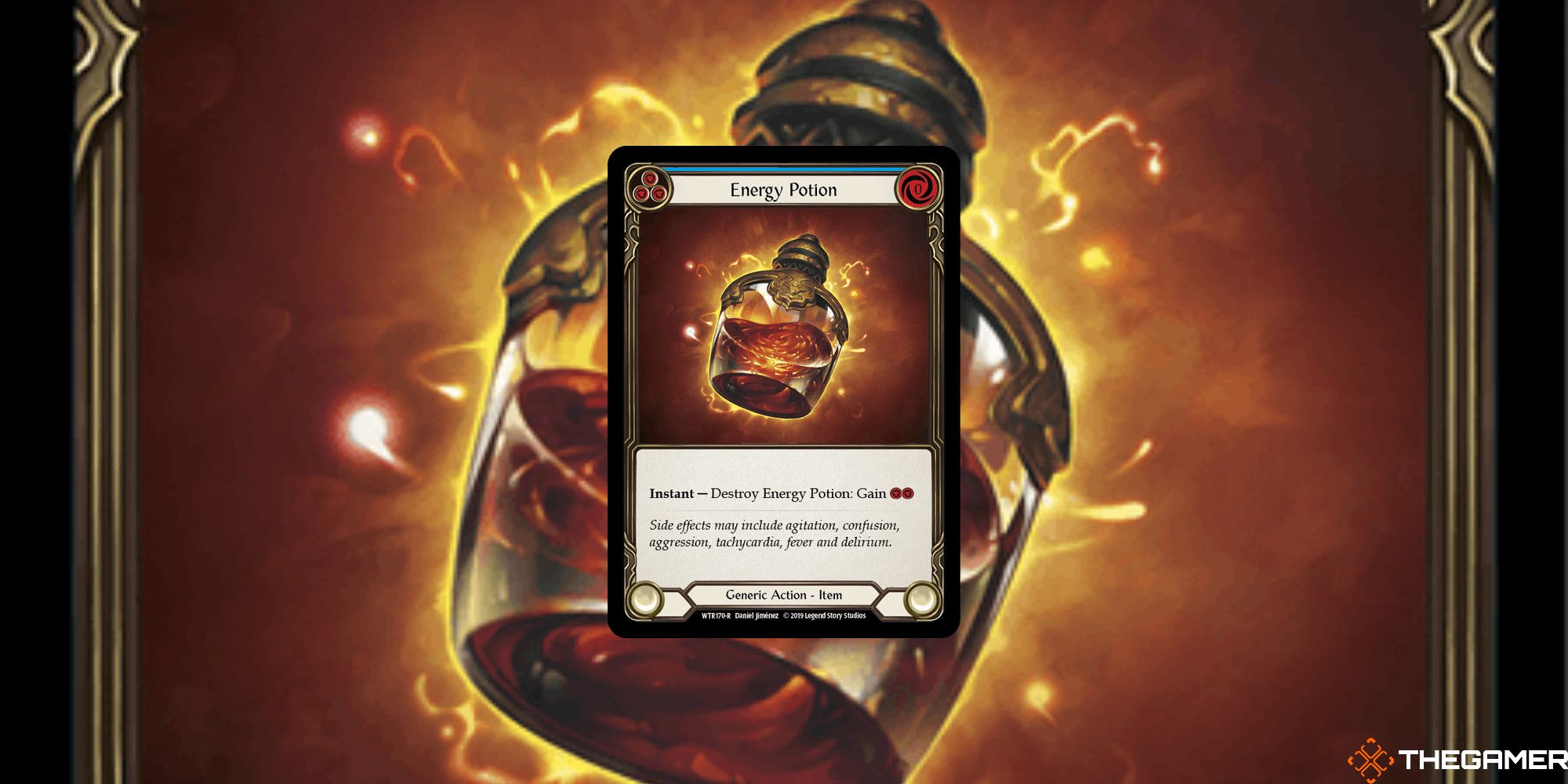 Energy Potion is a generic card that is highly used in many games due to its helpful nature. It's not only an action item card, but the ability listed on it is instant, which means it can be played any time for a cost. The energy potion is especially helpful in blitz matches, where speed is the main factor in how well you'll perform.

The ability listed on the card allows for it to stay in the arena until the player decides to destroy it, gaining two resources in the process. On top of this, it can be used at any time during play when you have priority, even if it's the opponent's turn, allowing for an easy attack or rebuttal against the enemy. 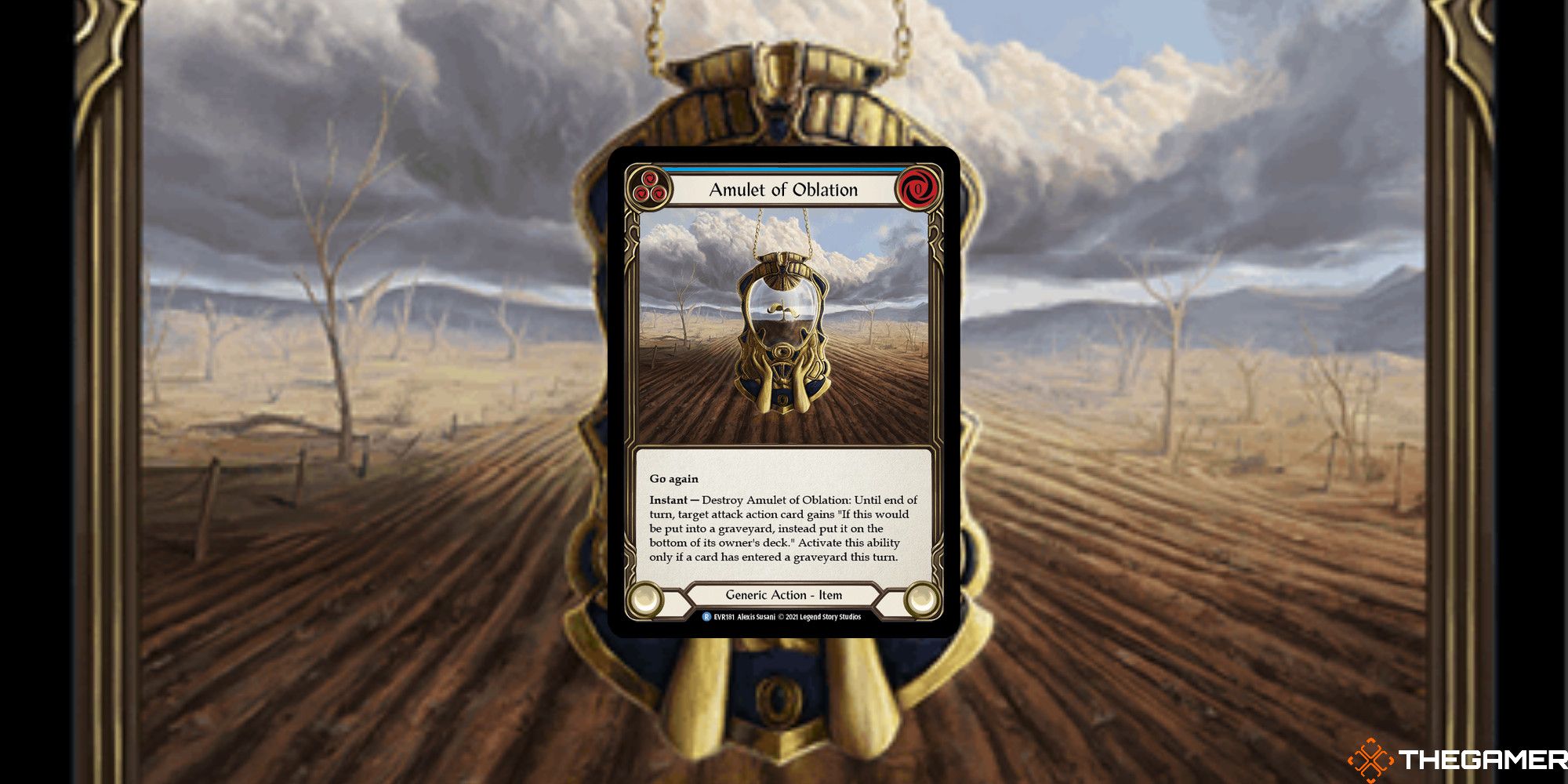 The Amulet of Oblation is a unique generic item card that transcends death and allows for cards that are about to be put in the graveyard to be instead shuffled back into the bottom of the deck.

On top of its graveyard ability, it's also a special instant card and allows the user to play again, meaning that the action point is restored. The graveyard is especially useful in TCGs because it can help bring back especially effective cards that usually wouldn't be able to be played again. This is why the Amulet of Oblation is excellent for allowing high-level tactics that would typically be impossible. 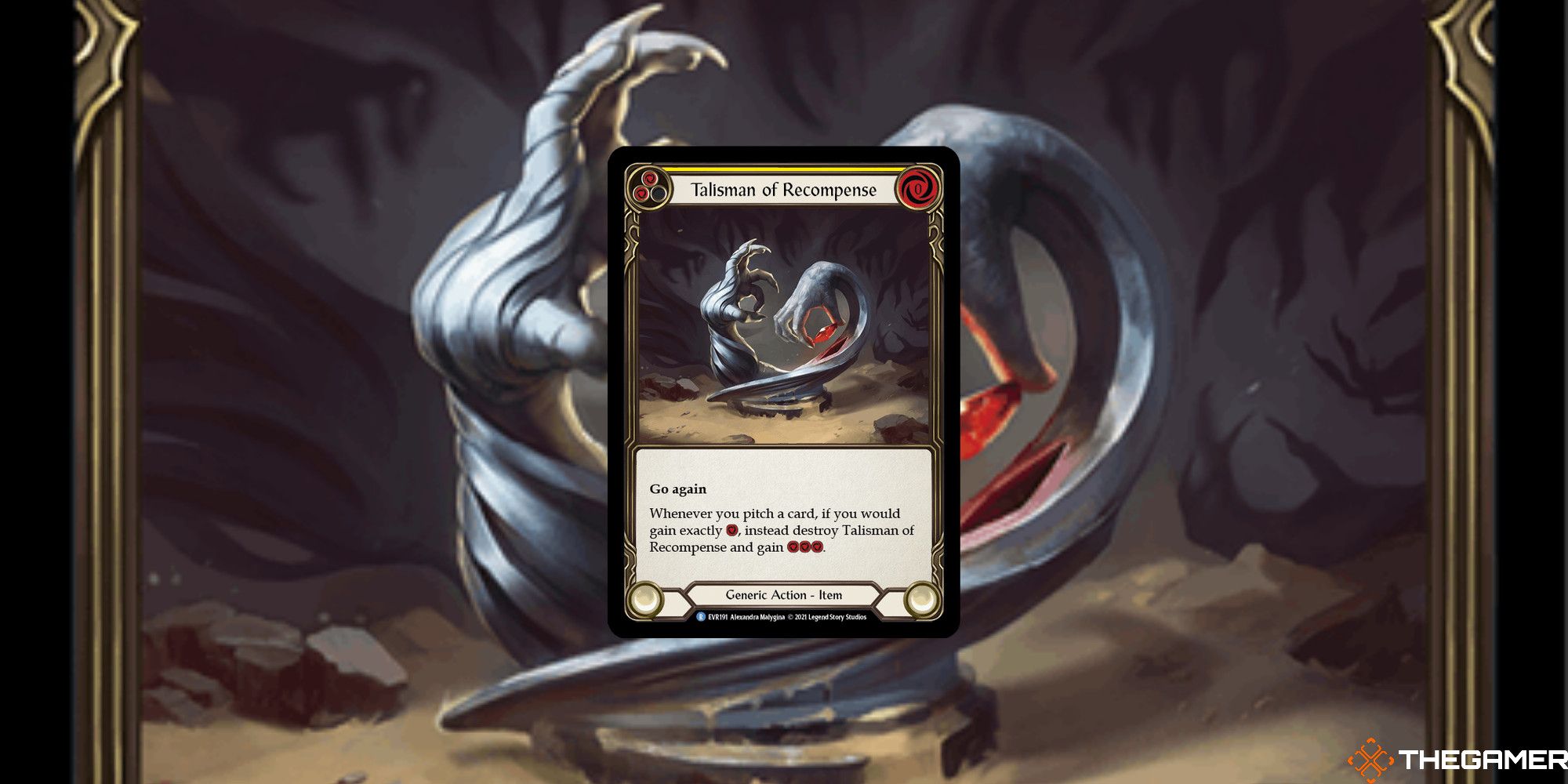 The Talisman of Recompense is a generic item that can make pitching lower resource cards into a viable and great opportunity for a large amount of resource gain.

In TCGs, there are some cards that are similar to the Talisman of Recompense, where trading in one can give more resources with another. This card, in particular when pitching, takes any one resource card, turns it into a three resource card when the talisman is destroyed, then allows the user to go again afterward. Tactics revolving around resource gathering are greatly improved by having low resource pitching cards into the maximum amount of resources. 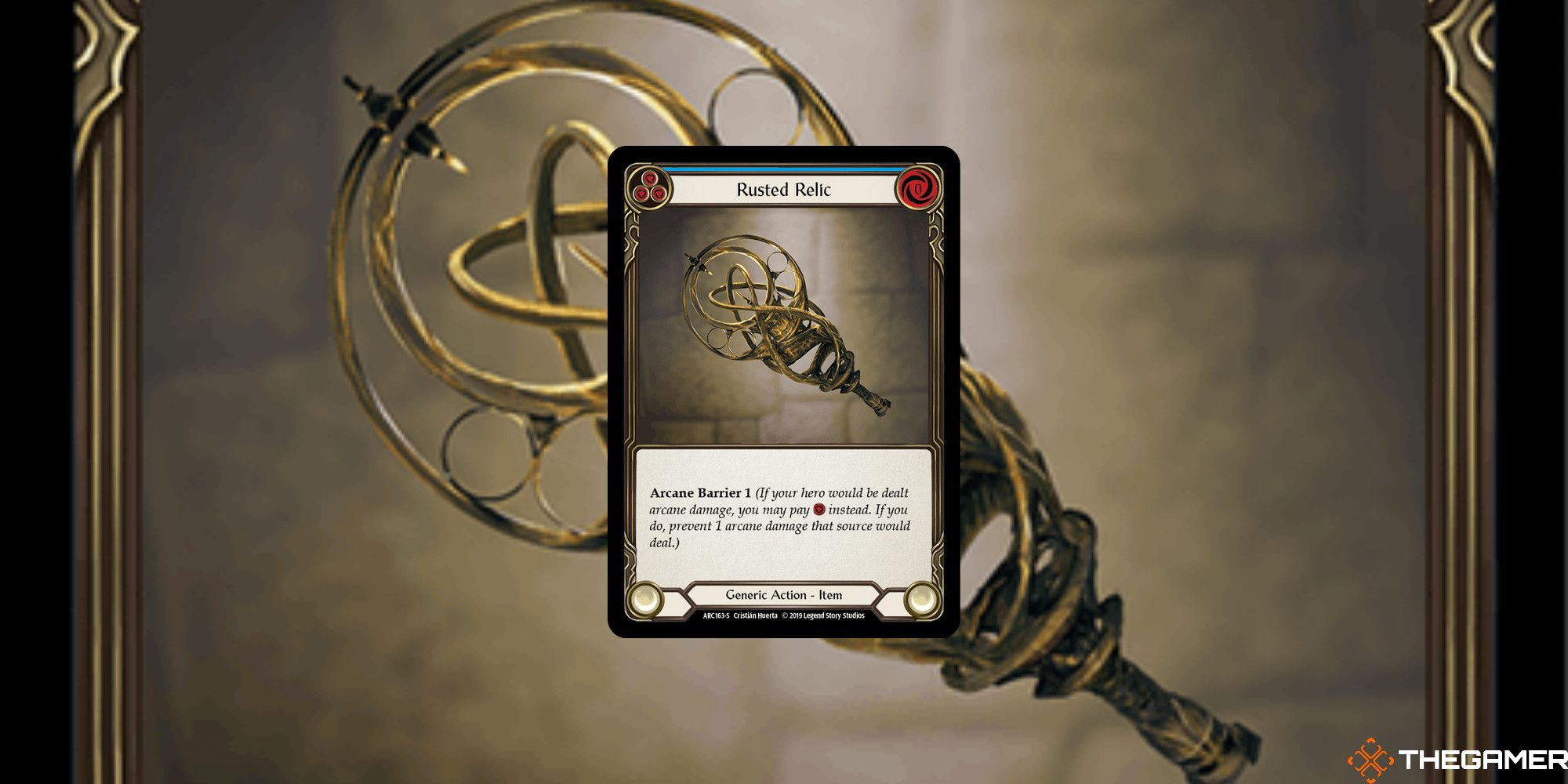 This Rusted Relic item card is a super rare generic card that can be incredibly useful in many competitive decks. The primary ability of the card is the arcane barrier, but it has many hidden abilities in it as well.

To begin with, the arcane barrier can prevent arcane damage for only the cost of one resource point. But, because it's a very versatile card, you can have multiple instances of this card in a play to prevent significant damage. On top of that, it's a card that can't be stopped due to its replacement effect, which is not using an ability. 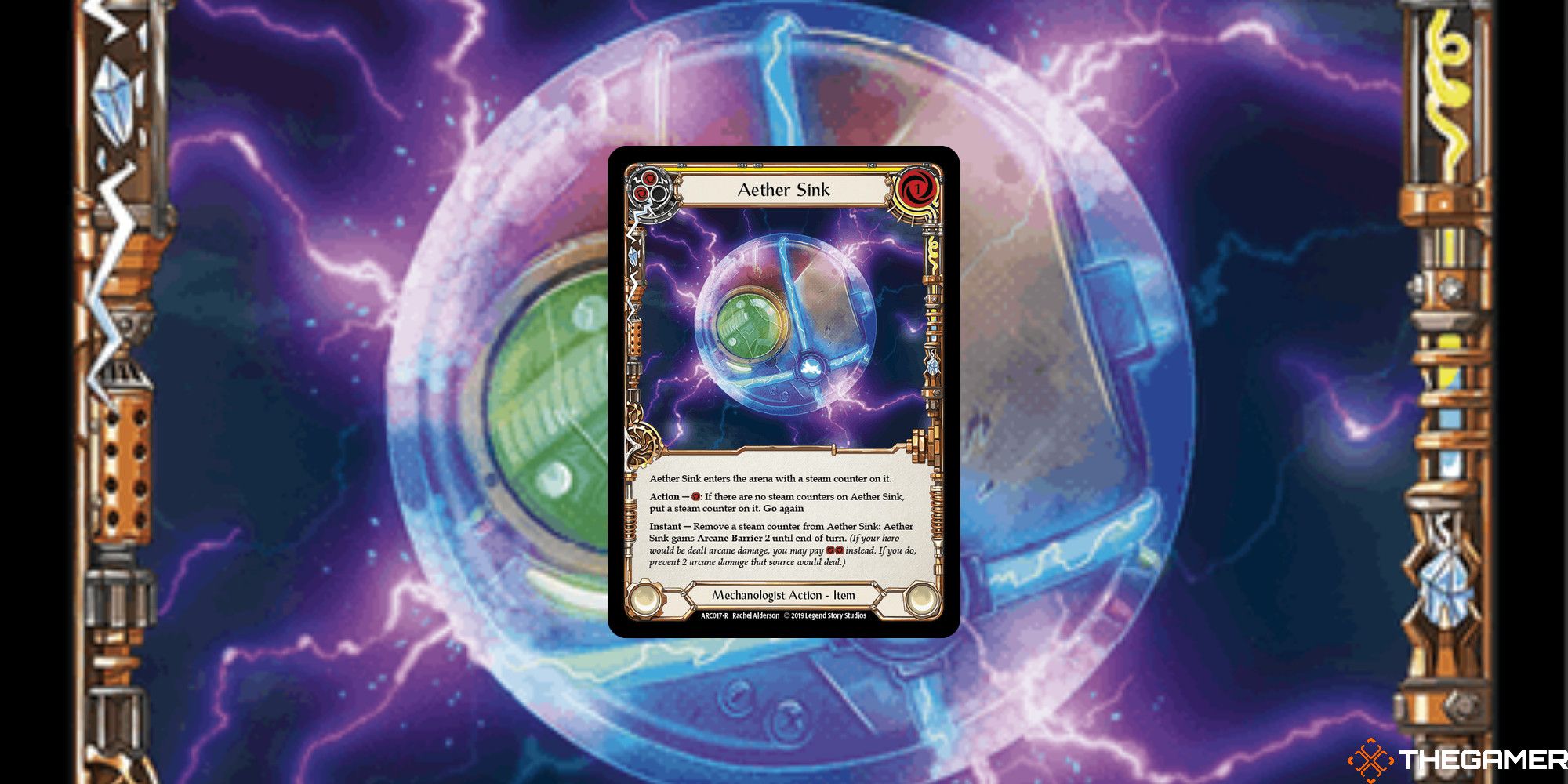 Dash is a hero who falls underneath the mechanologist class type, and one of the nice things about Dash is that there are a variety of item cards that work together well just for her. One of these cards is the Aether Sink with an almost upgraded arcane barrier.

Now, the reason why it's not quite upgraded is that there are certain drawbacks to it. The Aether Sink card has the ability to block two points of arcane damage for two resources. It sounds great, but if you are dealt only one damage, you must still use two resources. But, just like the Rusted Relic card, this arcane barrier can be used multiple times and with other barriers for great protection against larger, more damaging attacks. 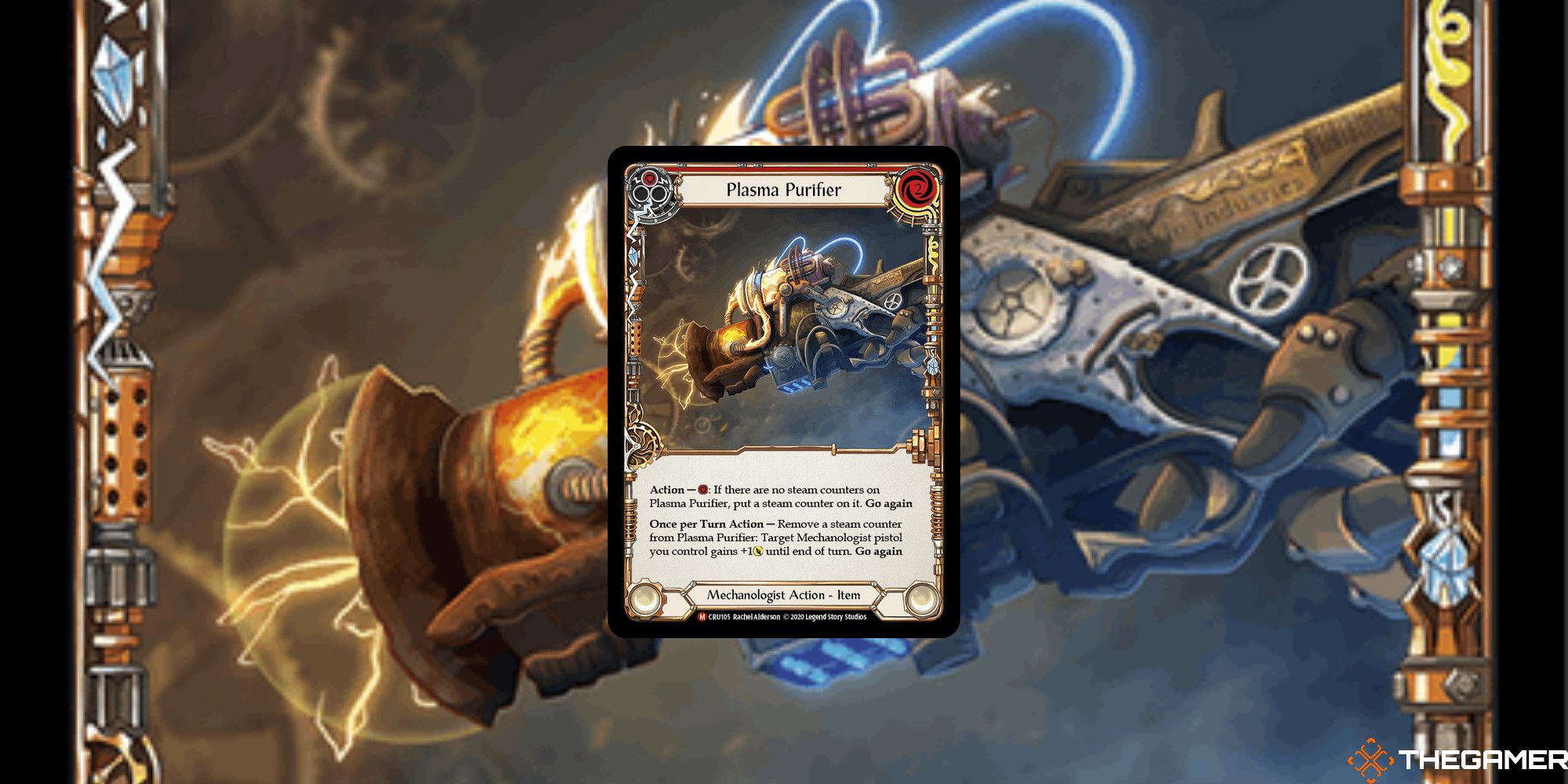 The Plasma Purifier is a very sought-after mechanologist class type card due to its ability to boost Dash's weapon card for a low cost. Because of this, many users go for high resource builds with Dash to create a high boost of attacks.

With this card in particular, it can be used once per turn, and the boost lasts until the end of the turn. However, to use it you must have a steam counter placed on it which is removed once the card is used. This card is great for low irregular attacks whenever you're building up for other more powerful attacks. 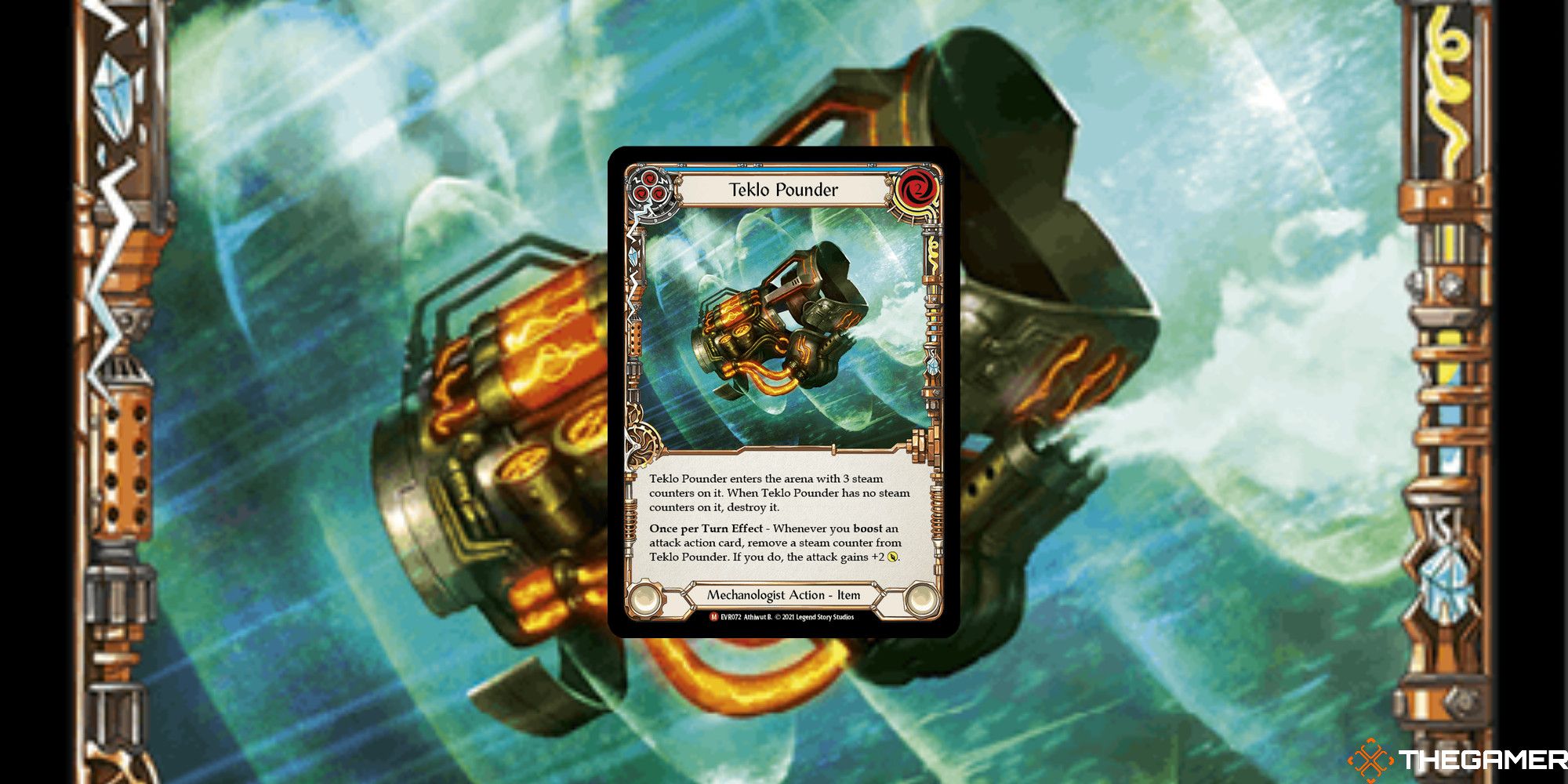 One of the better boosting cards for mechanologists is called the Teklo Pounder. It allows for an even better boost than the Plasma Purifier but costs more resources to use.

This card's abilities can actually start from the moment it's played because it starts off with three steam counters and requires only one to use the card to give its two attack power boost. The downside is that steam counters can not be added to the card, so after it's used, it will be destroyed. Players often use this card whenever setting up for bigger attacks due to its ability unable to be played once it has exhausted its power. 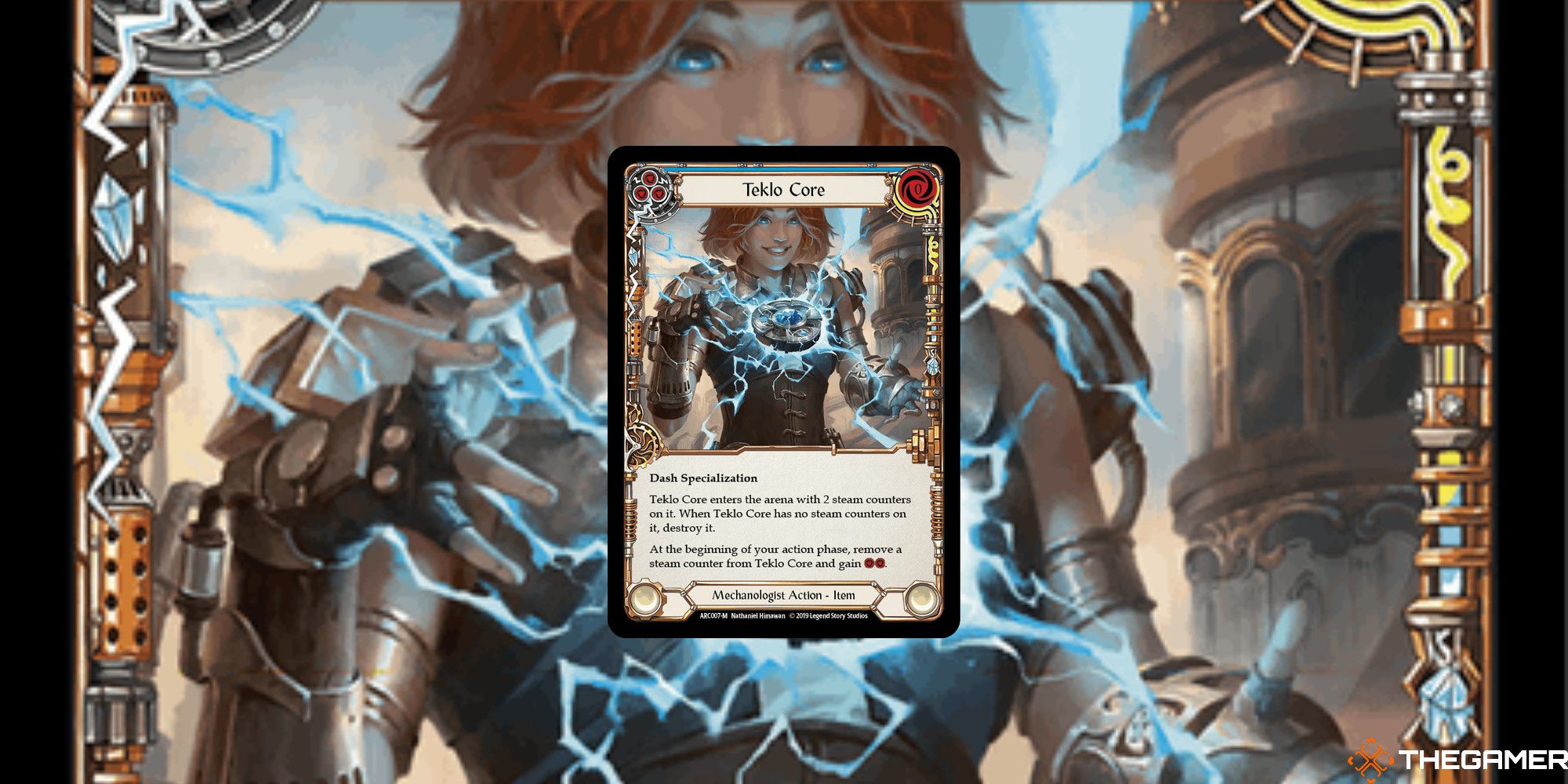 While other boosting cards aren't specialized just for Dash and can be used by any mechanologist class type, Teklo Core can only be used by Dash. This card is often used in most Dash decks to quickly gain resources in aggressive play or resource management and does so by pairing excellently with equipment type cards.

Teklo Core's abilities require steam counters; once they're gone, the card is destroyed. Luckily you can have multiple iterations of this card in a deck, so you can constantly get two resources per turn for no cost except an action point. It can also be pitched for three resources allowing for more game tactics. 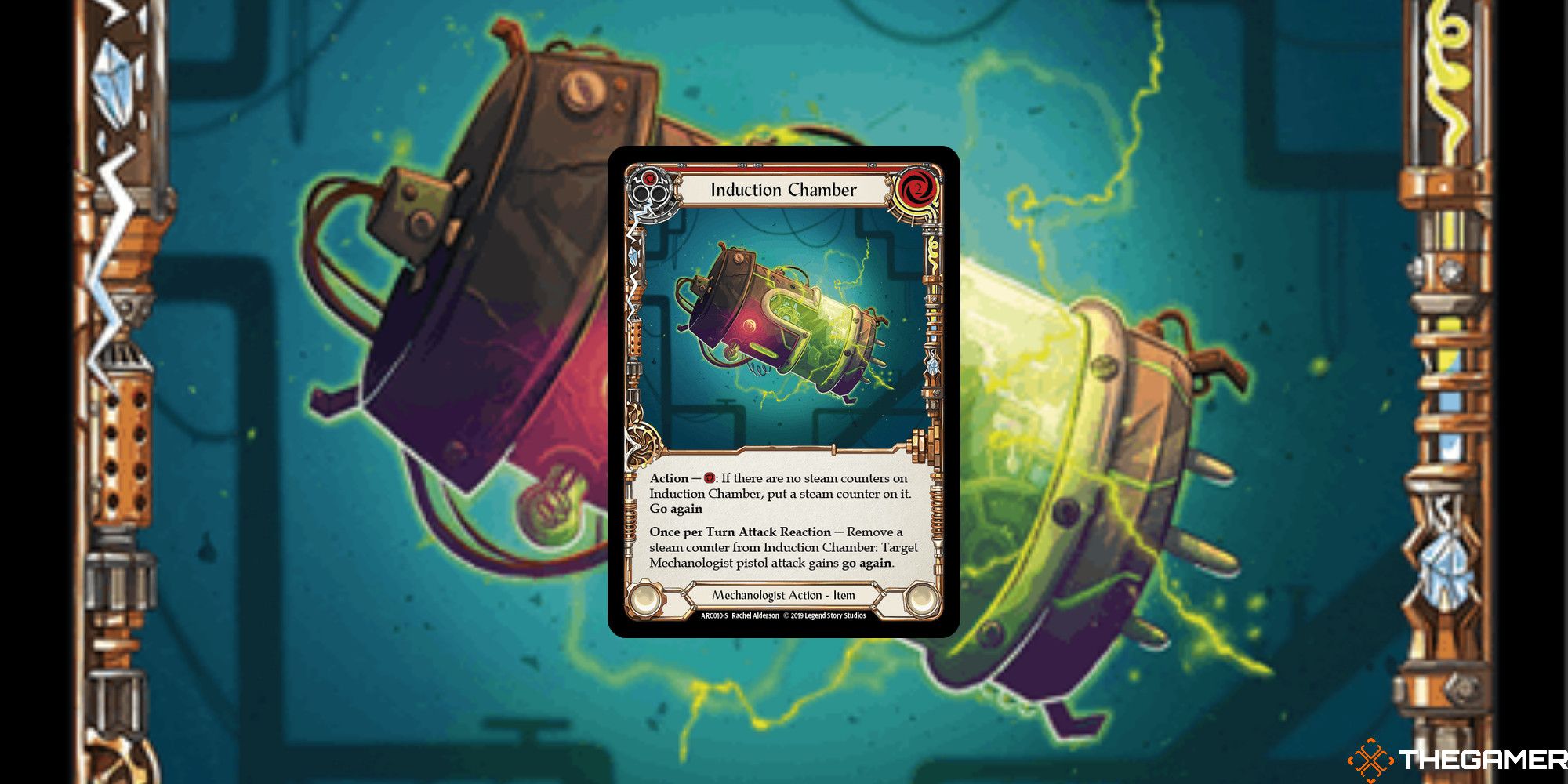 Chaining attacks in a link is critical when trying to lower your enemy's life as much as possible in your turn. So, Induction Chamber has to be one of the most essential cards in a mechanologist deck.

For the abilities listed on this card, it affects the mechanologists pistol and allows for it to go again for a low resource cost of one. Multiple instances of Induction Chamber can be used to go again various times to allow for big attacks on the enemy player with the correct resource and deck management. On top of that, if multiple instances of go again are used on the same card instead of attacking, the user will gain an action point in return.