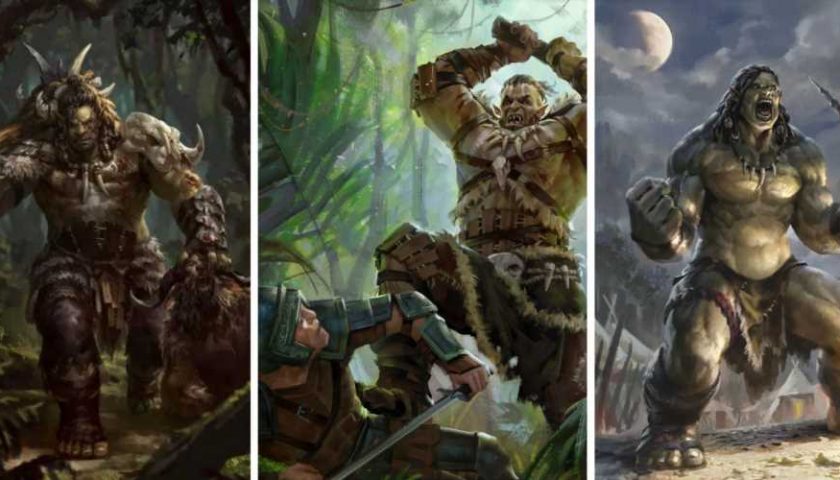 Flesh and Blood has nine classes that allow every player to find a hero, style, and build that works for them. If you like them strong, vicious, and surprisingly skillful, then Brute might be the one for you. Heroes Rhinar and Kayo hail from a world of violence, destruction, and desolation, bringing that aura to the table with them at every game.

While there are no on-hit attacks – effects that trigger only when damage is dealt – Brute players switch back and forth between offensive and defensive on the turn of a dime. But like all TCGs, your best weapon is a sharp mind and a great deck build. 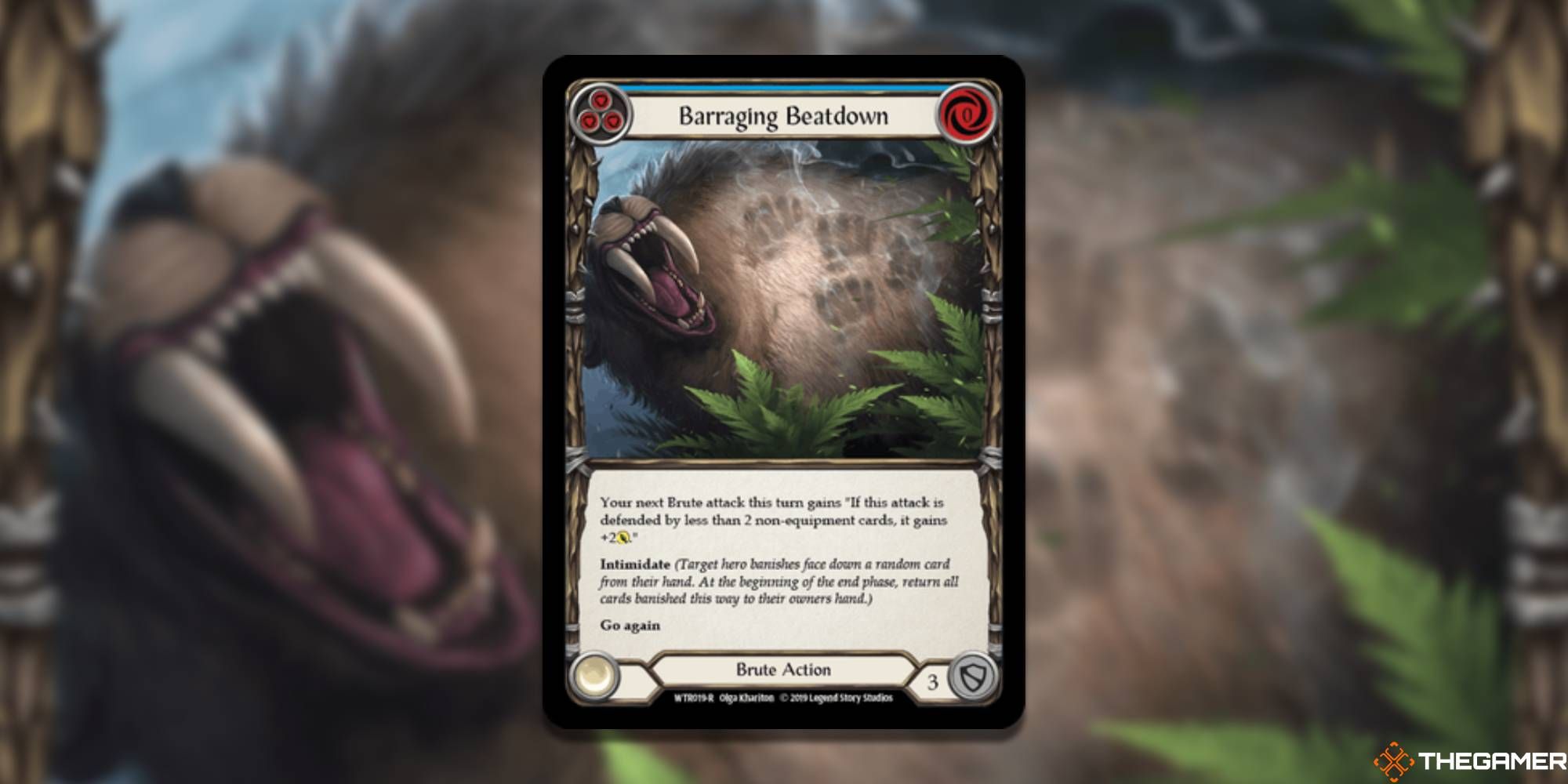 Intimidation is an important attribute of Brute heroes. The skill removes a random card from their deck, limiting their options to block and deal damage. Barraging Beatdown is a card structured with that in mind. Along with the built-in intimidation, it also adds two strength to your next attack if the card is defended by two non-attack cards.

When paired with a weapons card, you can do a large amount of damage in one turn. Best of all, there is no cost for this card. You can string intimidations or just force your opponent to toss two cards to block a boost from devastating the field. Speaking of which, Barraging Beatdown offers a block of three.

9 Romping Club: The Weapon Of Attrition 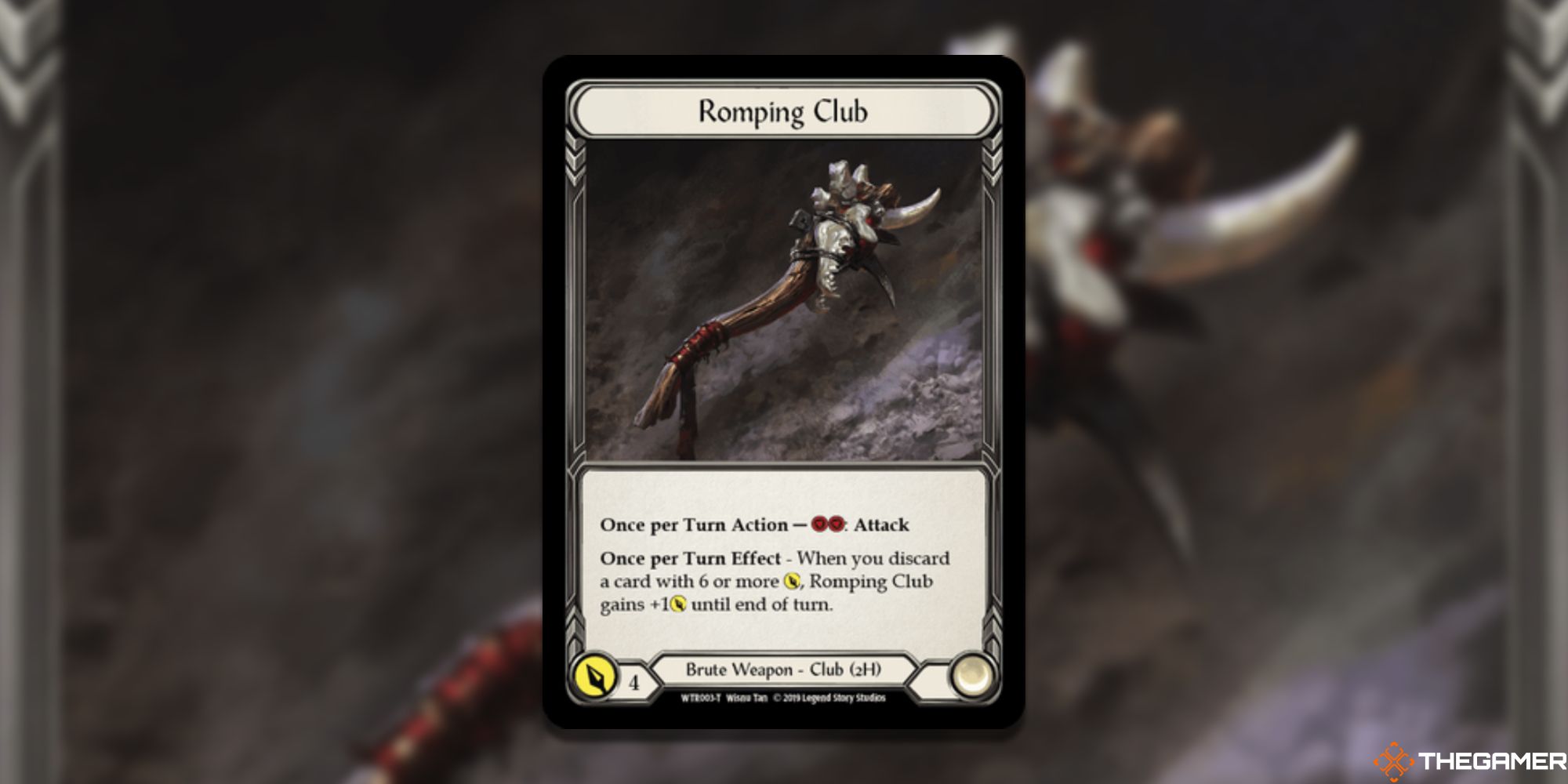 A large amount of damage in a single hit can be very satisfying, but sometimes a fatigue offense can bring great dividends. Romping Club is a solid weapon for that strategy. At a four for strength, it’s not a club to be trifled with on the table. But with every swing you can push through at least one point of damage in most cases, leading to steadily chipping away at the opponent’s life and cards.

It also has a nice defensive kick to it. If you pitch a yellow card, you can add an attack of three to the move for a deadly combination. 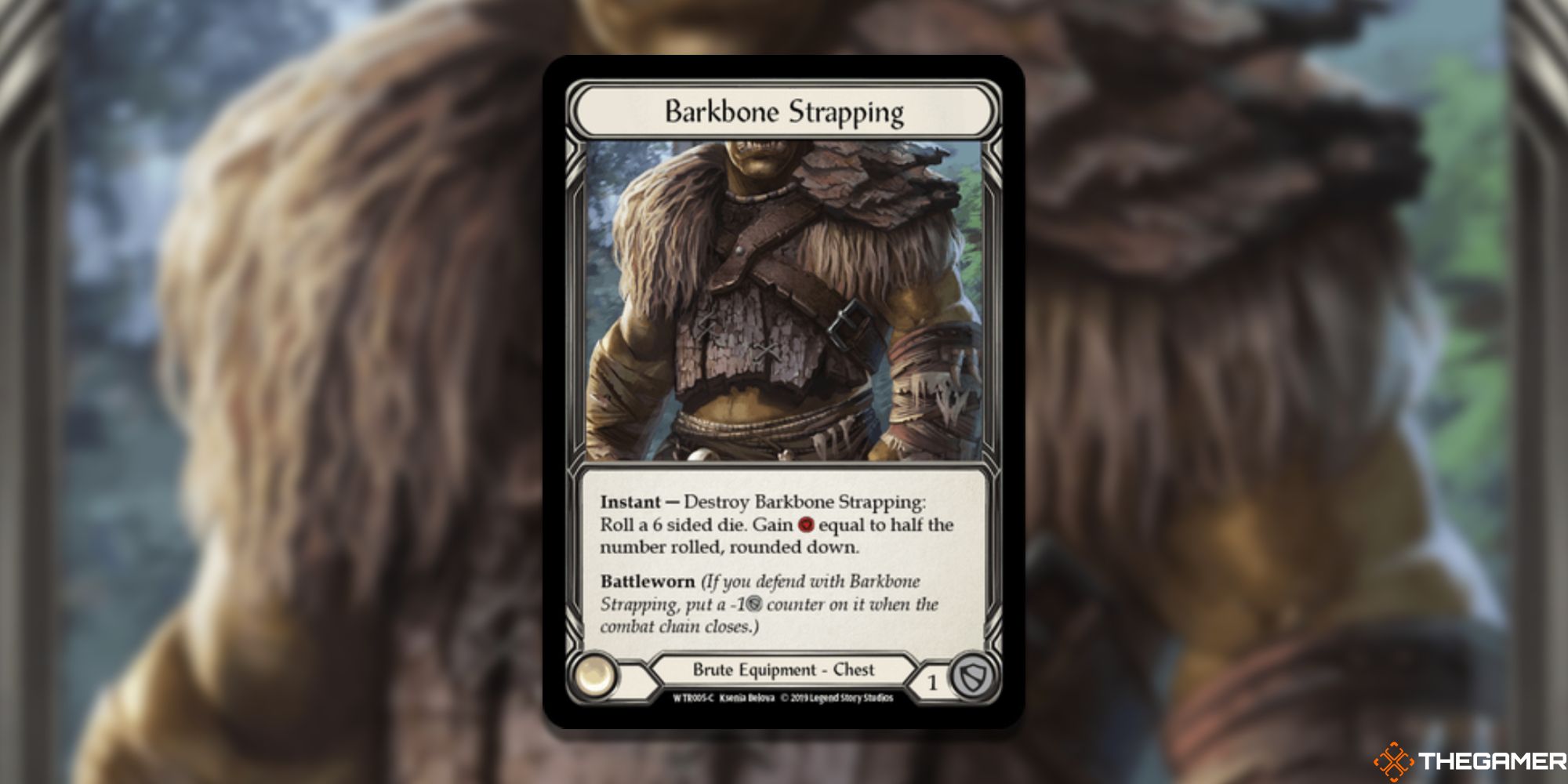 It’s easy to overlook equipment cards as being powerful, but that error could cost you a match. Barkbone Strapping is a go-to when you’re fighting against classes that have strong offensives and a plethora of instant actions. Pair it with Mandible Claws and you have a one-two punch of defense and offense that will keep you going strong.

Barkbone Strapping is also helpful in a pinch. Destroying it will give you half of the number from a d6 roll in action points. Multifunctional gear is always a bonus.

7 Massacre: Just What The Card Says 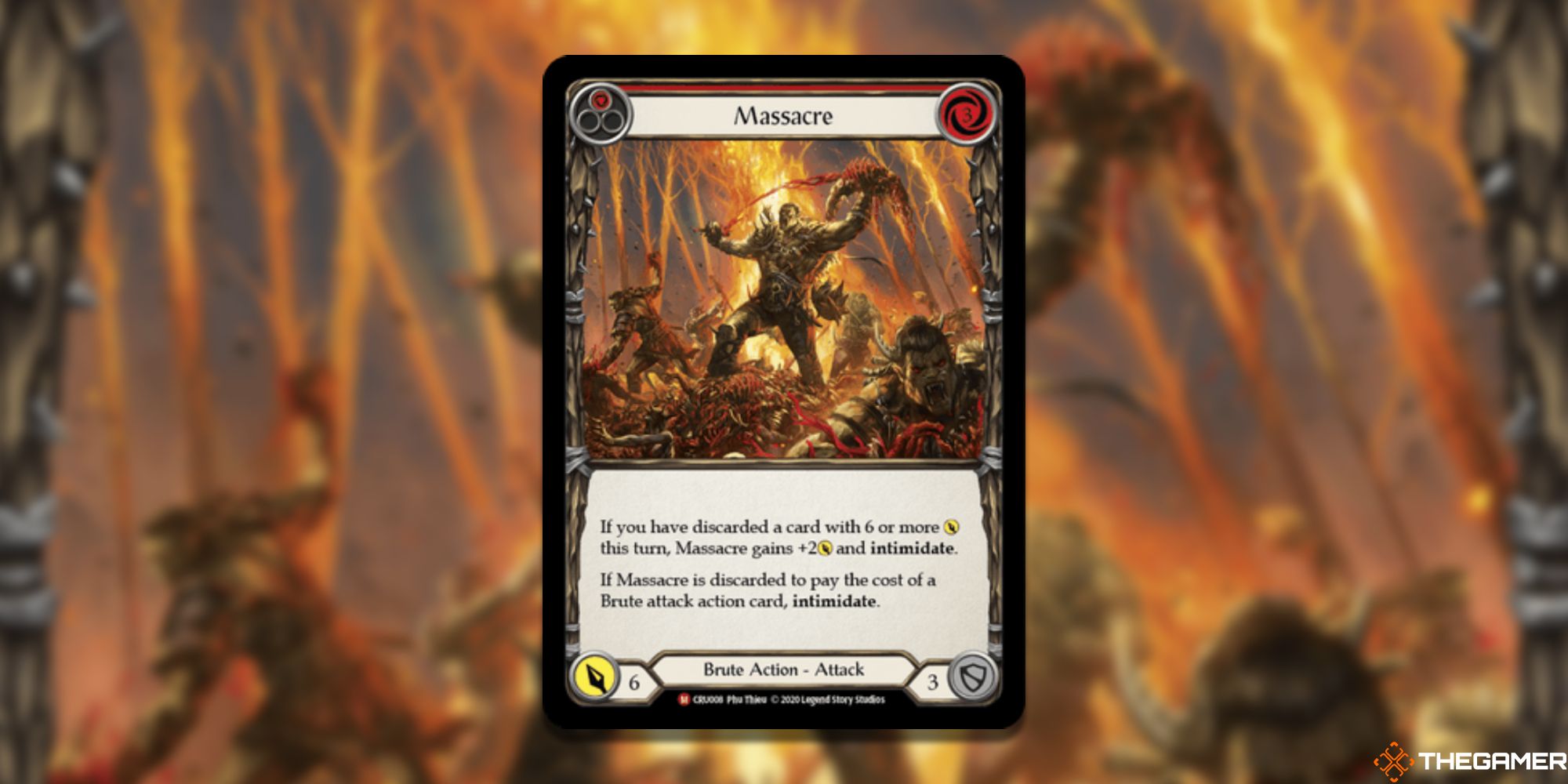 Massacre lives up to its name on the table. Well worth its cost of three action points, the card has a strength of six that rises to eight if a card of six or more strength is in the pitch pile. On top of that, you also gain intimidate from this action.

Played correctly, this can set up a landslide of double-digit damage that your opponent will have a hard time coming back from. In addition, you can discard Massacre to play for another Brute action and still receive intimidate.

6 Skullhorn: You Can’t Use Your Head If You Lose It 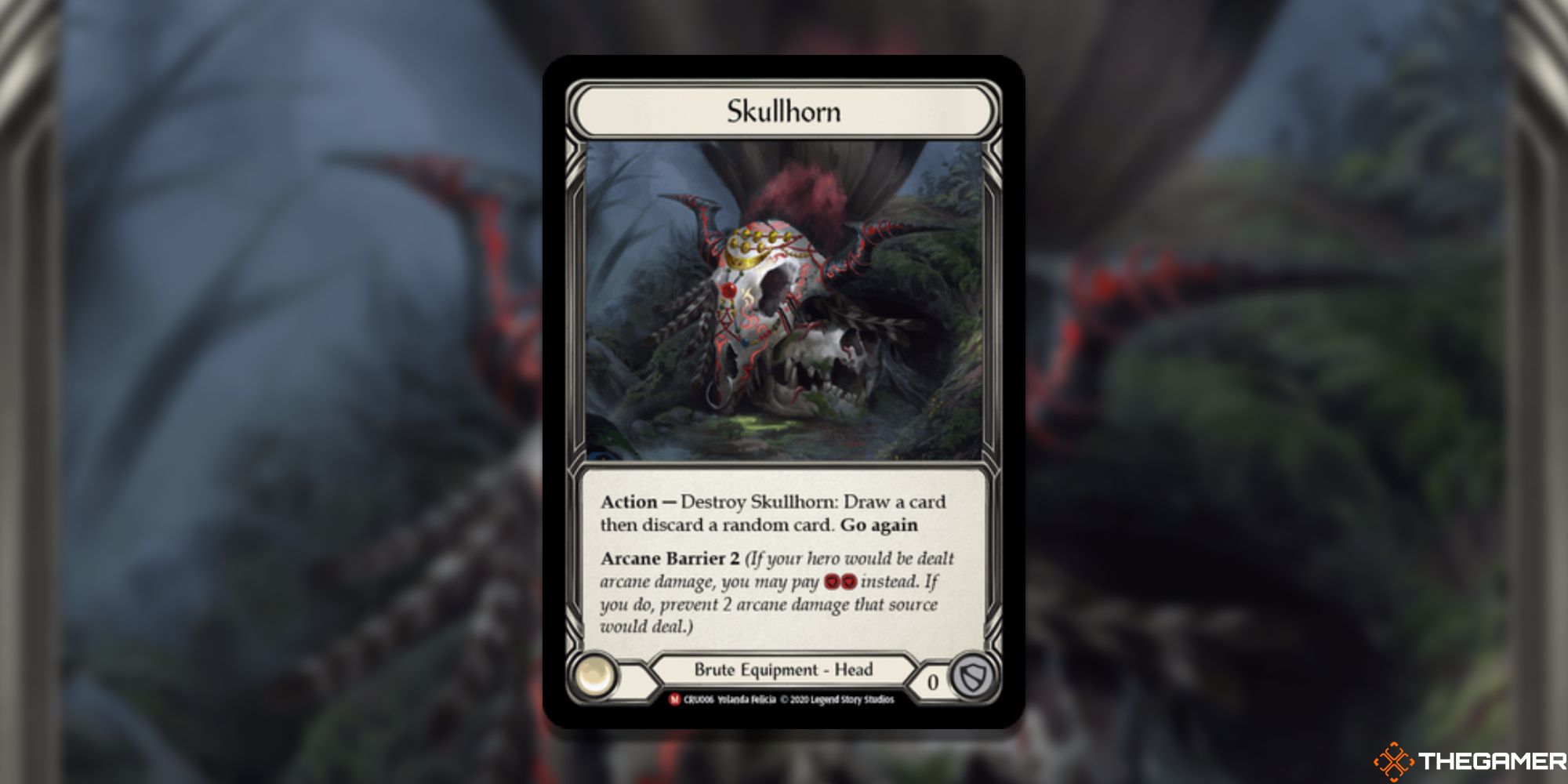 An arcane barrier of two, with the ability to pay two action points to prevent the same amount of damage; that's what makes the Skullhorn the best thing a Brute can put on their head. The action of the card allows you to destroy the boney head covering in exchange for drawing a card. A random card must be discarded afterward.

Skullhorn can also be combined with other cards to amplify the intimidation factor. In the right pairings, it can quadruple intimidate, making your opponent waste up to four cards to prevent further damage. 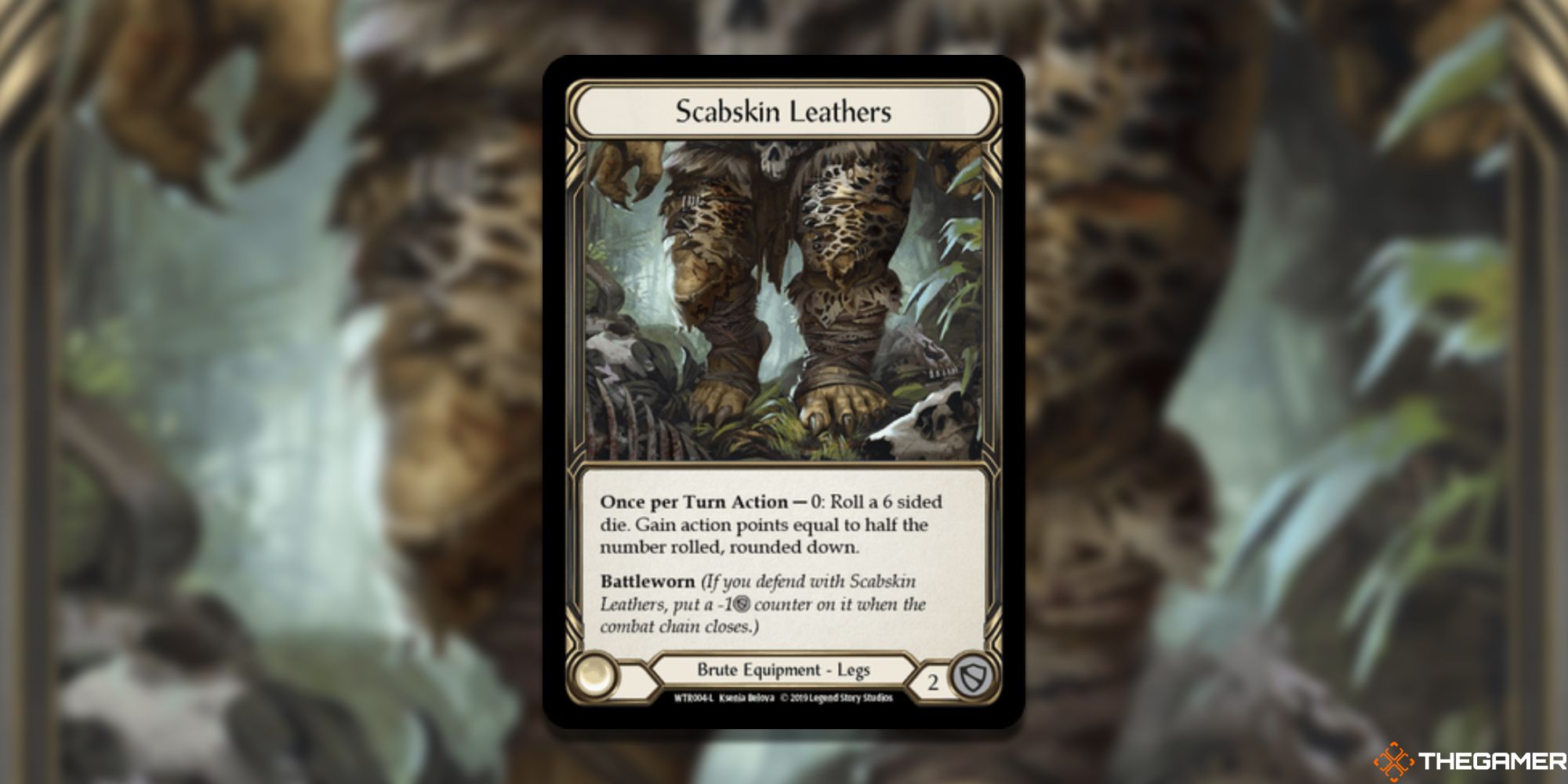 To roll or not to roll, that is the question. This card will give you action points equal to half the roll of a d6. But the card itself carries a defense stat of two without the roll. Is it worth the risk? The simplest answer is that there is no simple answer. You have to use your best judgment based on your opponent’s deck and play style.

Because of the anxiety and indecision, this card can cause, it has achieved meme status in the Flesh and Blood player community.

4 Breakneck Battery: Burn It To The Ground 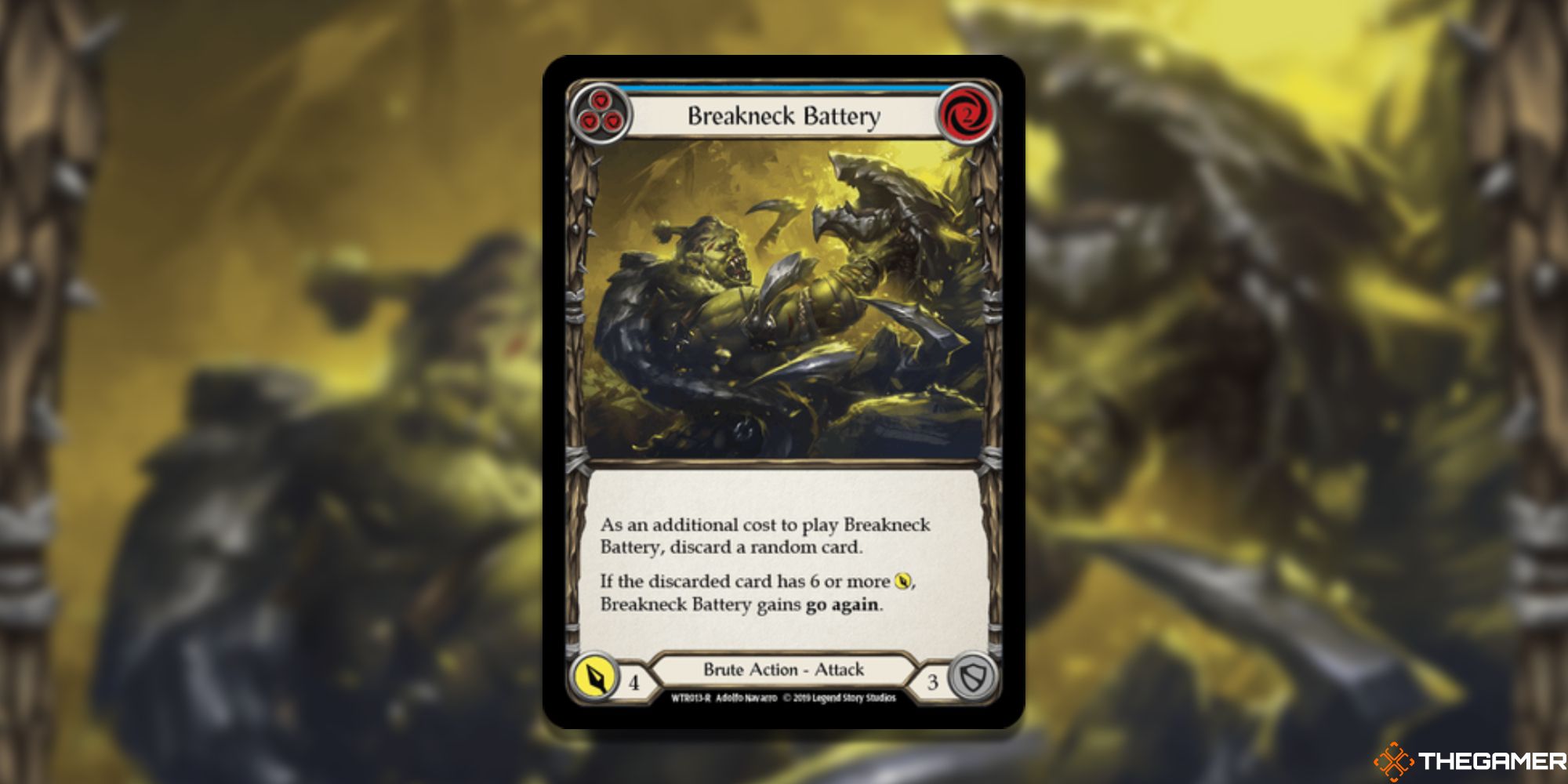 Doing a lot of damage is one of the most satisfying moments for most gamers. This card allows you to let loose the side of you, er, your hero that just wants to see the world burn. With a strength of six, this attack gives generous returns from a cost of two action points and one discarded card.

If the pitched card is a strength of six or higher then you’re in luck. You get to unleash another round of Breakneck Battery. With that kind of damage capability, it's a deck MVP for players who favor a high-aggro style. 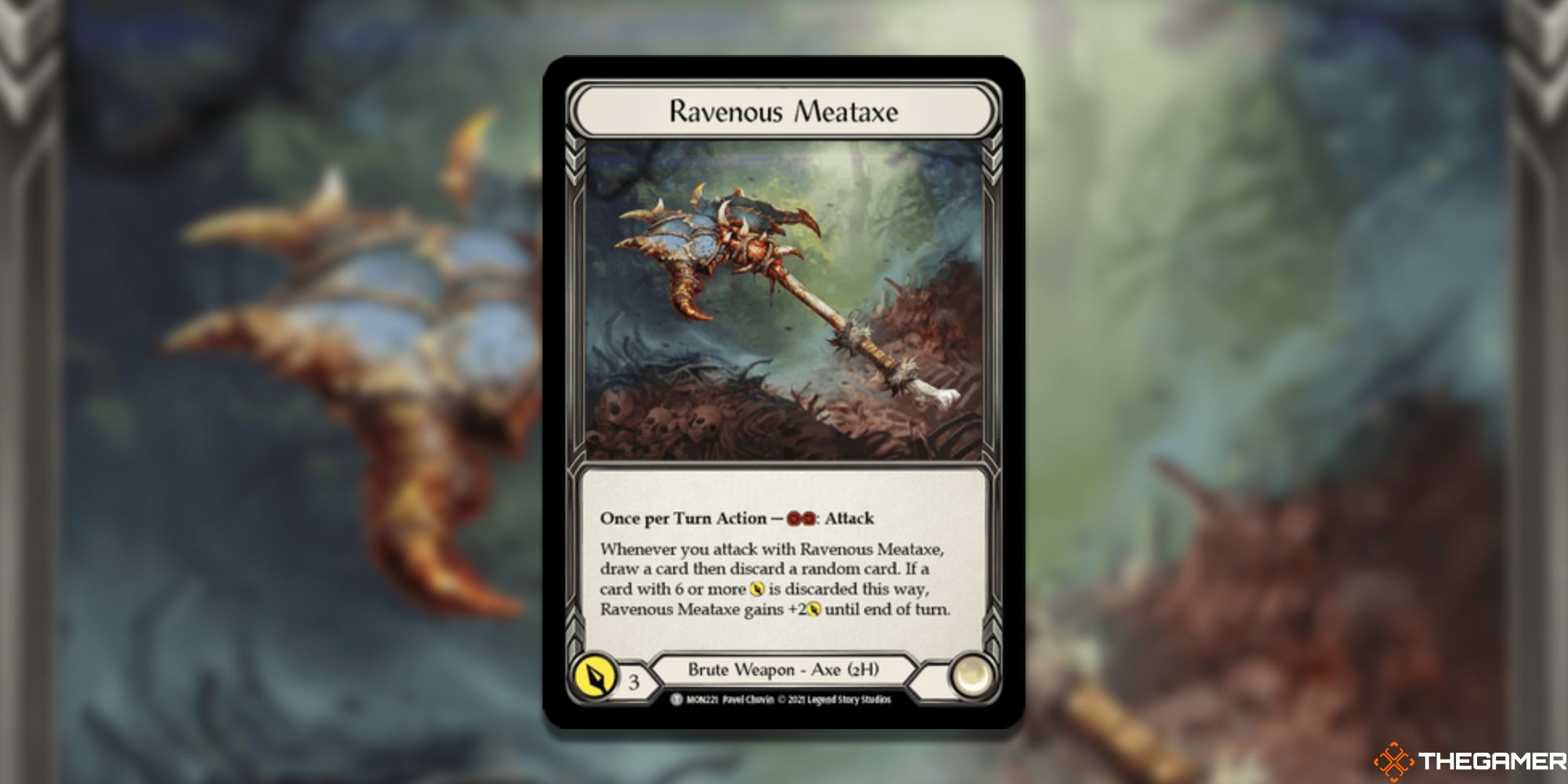 Some players crave predictability, while others embrace the element of chance and the chaos it can bring to the table. If you’re in the latter category, Ravenous Meataxe is a weapon well worth consideration. The two-handed greataxe can mete out an attack with three strength for a cost of two action points.

When using the Meataxe, you must draw one card and discard another random one. The card discarded must be six in strength or higher to add a two strength bonus for the rest of the turn. Therein lies that sneaky element of chance, but raising the damage up to five is often well worth the risk, especially when three damage is nothing to sneeze at even without the bonus.

2 Swing Fist, Think Later: The Philosophy Of The Brute 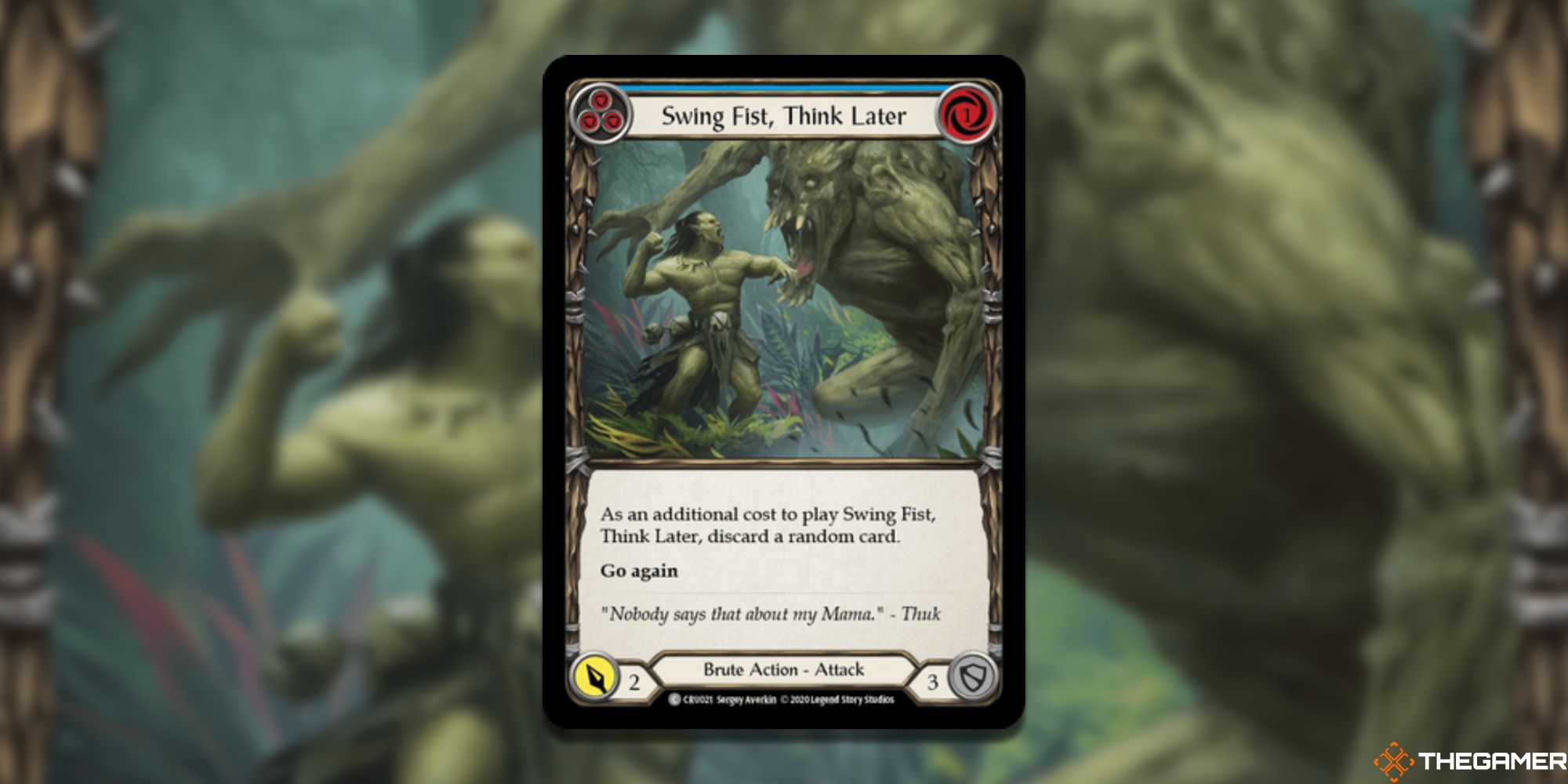 Swing Fist, Think Later is the epitome of the Brute class. If Barraging Breakdown is the heart of the class then this card is the soul of the class. For a cost of one, you can deal an attack with four strength and three block. You must also discard a random card for this attack. If the wrong card goes, it can really put a damper on your strategy.

With the ability to go again, you are in effect getting eight strength and six block for the cost of one card and one action token. An extremely reasonable price of admission for the possible carnage. And a reminder you can’t say brute force without Brute.

1 Bloodrush Bellow: Power Up Your Punches 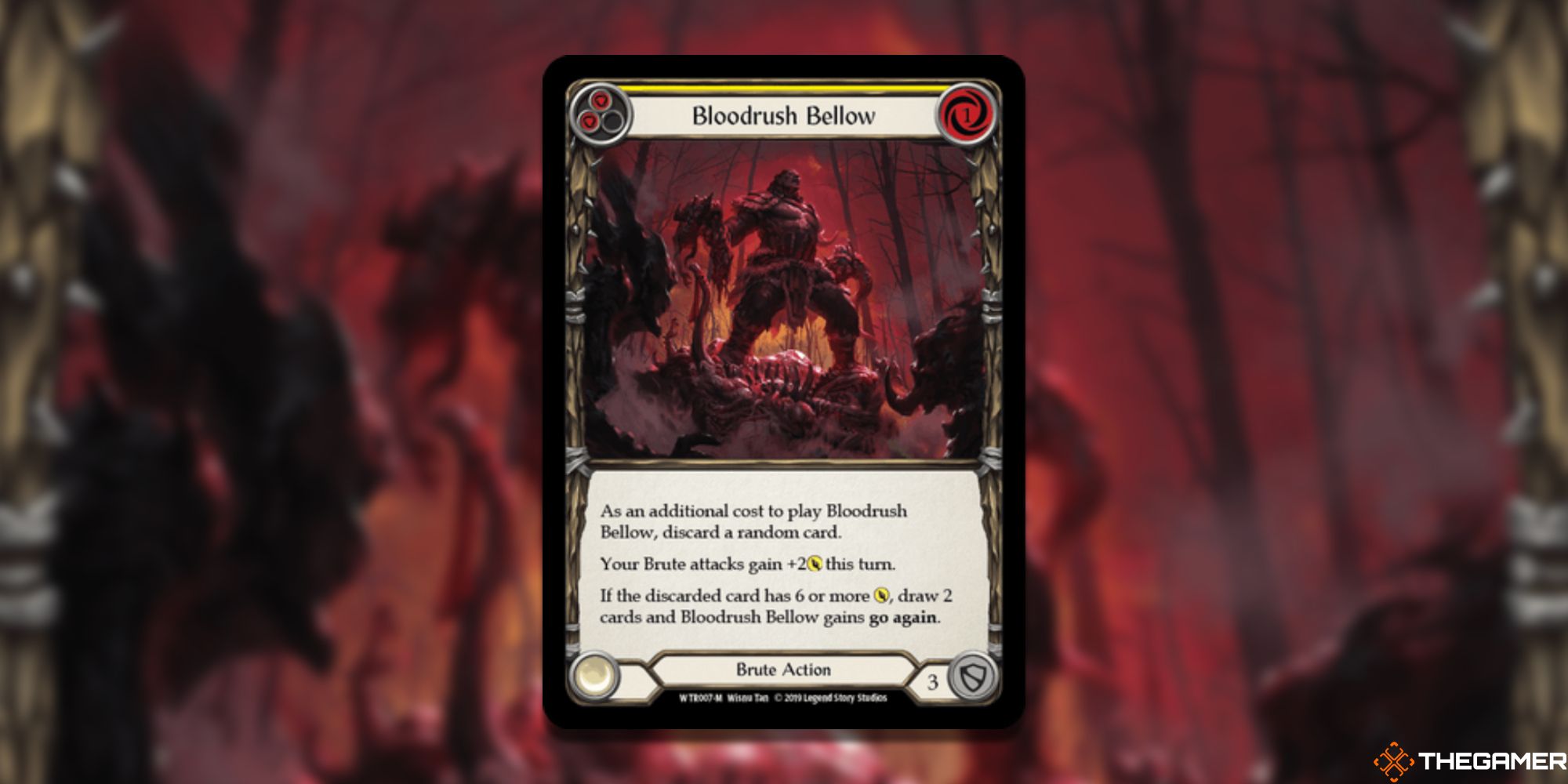 This card, when played right, can be the turning point in the game. Bloodrush Bellow has the cost of one and the discarding of a random card to gain plus two strength on attacks for that turn. If the tossed card is worth six strength or more than you get to draw two cards and go again.

When paired with a strong weapon such as Mandible Claws you can deal damage after damage, leaving your opponent reeling. This card is a must-have in your deck build if you want to access the full, disastrous potential of the Brute.