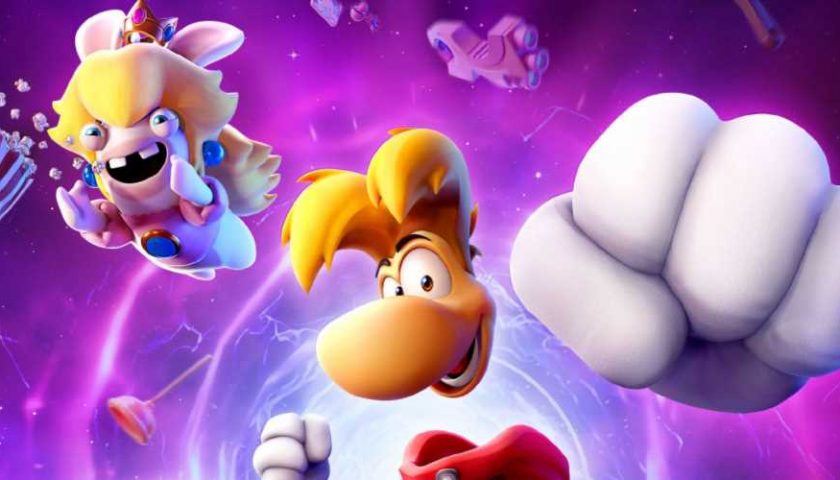 The first look at Rayman in his DLC mission for Mario + Rabbids: Sparks of Hope has been revealed and his design seems to take inspiration from both his original appearance and his updated look from Hoodlum Havoc onwards.

One of the biggest surprises of the last Ubisoft Forward event was the reveal that Rayman would be making a return through a DLC pack for Mario + Rabbids: Sparks of Hope. At the time, only Rayman's head was shown and nothing was revealed about the DLC, but Ubisoft has just given us our first proper look at both the DLC and Rayman himself.

The official Ubisoft Twitter revealed the Sparks of Hope season pass contents over on Twitter. The first pack is a new game mode called the Tower of Dooom and is aiming for early 2023, while the second is unnamed, is aiming for mid-2023 and seems to feature a new Rabbid character of some kind.

Forget those two, though, we're here for Rayman. The third DLC shows Rayman along with Rabbid Mario and Rabbid Peach, who will also apparently feature in the DLC. The description for the DLC pack reads, "Rayman, Rabbid Mario, and Rabbid Peach embark on their own adventure", implying that it'll just feature those three. The pack is currently slated for late 2023.

Although we don't get too much information about the DLC pack itself, save from it featuring those three characters, it does reveal what Rayman's design is going to be. Typical for modern Rayman, he has the same hoodie that he's had since Rayman 3: Hoodlum Havoc, although now with pockets. He does have shades of his design from the first and second game however, as his shoes match the ones that he wore in the original game instead of the sneakers he wore from the third game onwards.

Thankfully, this season pass image also debunks the theory that it wouldn't have actually been Rayman within the DLC, and would have instead been some kind of Rabbid cosplaying as him.