After more than a year of development, Mozilla today launched Firefox 79 for Android, branded Firefox Daylight. Like with Firefox 57 Quantum, Firefox Daylight gets its own name as it marks “a new beginning for our Android browser.” The new version is “an entirely overhauled, faster, and more convenient product.” Firefox Daylight includes Enhanced Tracking Protection on by default, a new user interface, Mozilla’s own mobile browser engine GeckoView, and a slew of new features. Mozilla is rolling out the new Firefox for Android globally, starting in Germany, France, and the U.K. today, and North America starting August 27.

Firefox has about 200 million active users, according to Mozilla, making it a major platform for web developers to consider. But that number has been steadily falling over the years. Furthermore, on mobile, where users are less likely to change their default browser, Firefox holds less than 1% market share, according to Net Applications. That’s why the company decided to hit reset on its Android browser.

The launch comes at a difficult time for Mozilla, which earlier this month announced layoffs of about 250 employees. We spoke with Mozilla senior product manager Vesta Zare about the Firefox Daylight launch. “I wouldn’t say it was impacted that much by the layoffs but of course everyone was impacted,” Zare said. “But I do want to stress that this remains a priority, a high area of focus for us, especially on mobile.”

Over the past two years, Mozilla has been boosting Firefox’s privacy chops, especially when it comes to blocking web trackers. Other browser makers have made similar strides, a win for browser users but a headache for the online advertising industry and the businesses that depend on it.

Firefox 69 arrived in September with Enhanced Tracking Protection turned on by default and cryptomining blocked by default. Firefox 70 followed in October with cross-site tracking cookies from sites like Facebook, Twitter, and LinkedIn blocked under the Standard setting, and Firefox 72 arrived in January with fingerprinting blocked by default. All told, Firefox now blocks 10 billion third-party tracking cookies, cryptominers, and fingerprinters per day. 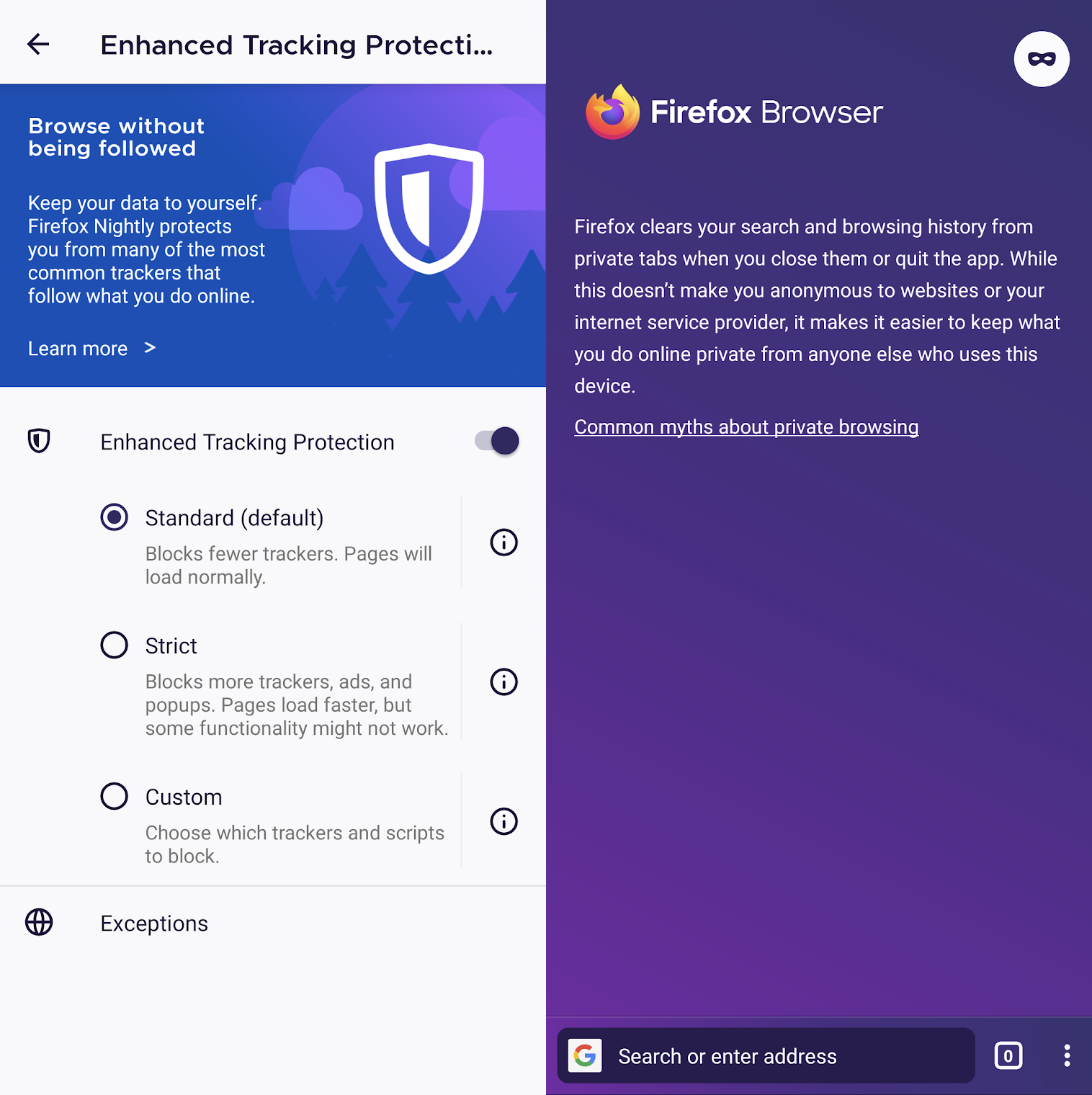 Now, Firefox Daylight is turning on Enhanced Tracking Protection by default on Android. Ad trackers are blocked in the Standard mode right out of the box, but users can customize their privacy settings further using the Strict or Custom options.

Speaking of privacy, Firefox Daylight has an improved Private Mode based on the privacy browser Firefox Focus. Private Mode is now accessible from the Firefox homescreen and users can create private browsing shortcuts on their Android homescreen. This largely makes Firefox Focus redundant, though Zare confirmed to VentureBeat that Mozilla has no plans to kill off the privacy browser.

“Firefox Focus is going to stick around for now,” Zare said. “We did port over a lot of the popular Focus features into this browser, because we know users loved it. But again, I think the beauty of Focus is that it’s very simple, and lightweight so I think we want to first launch this browser and then figure out how both browsers can coexist together in the same market.”

The new Firefox for Android has a completely overhauled user interface. Best of all, it’s customizable. 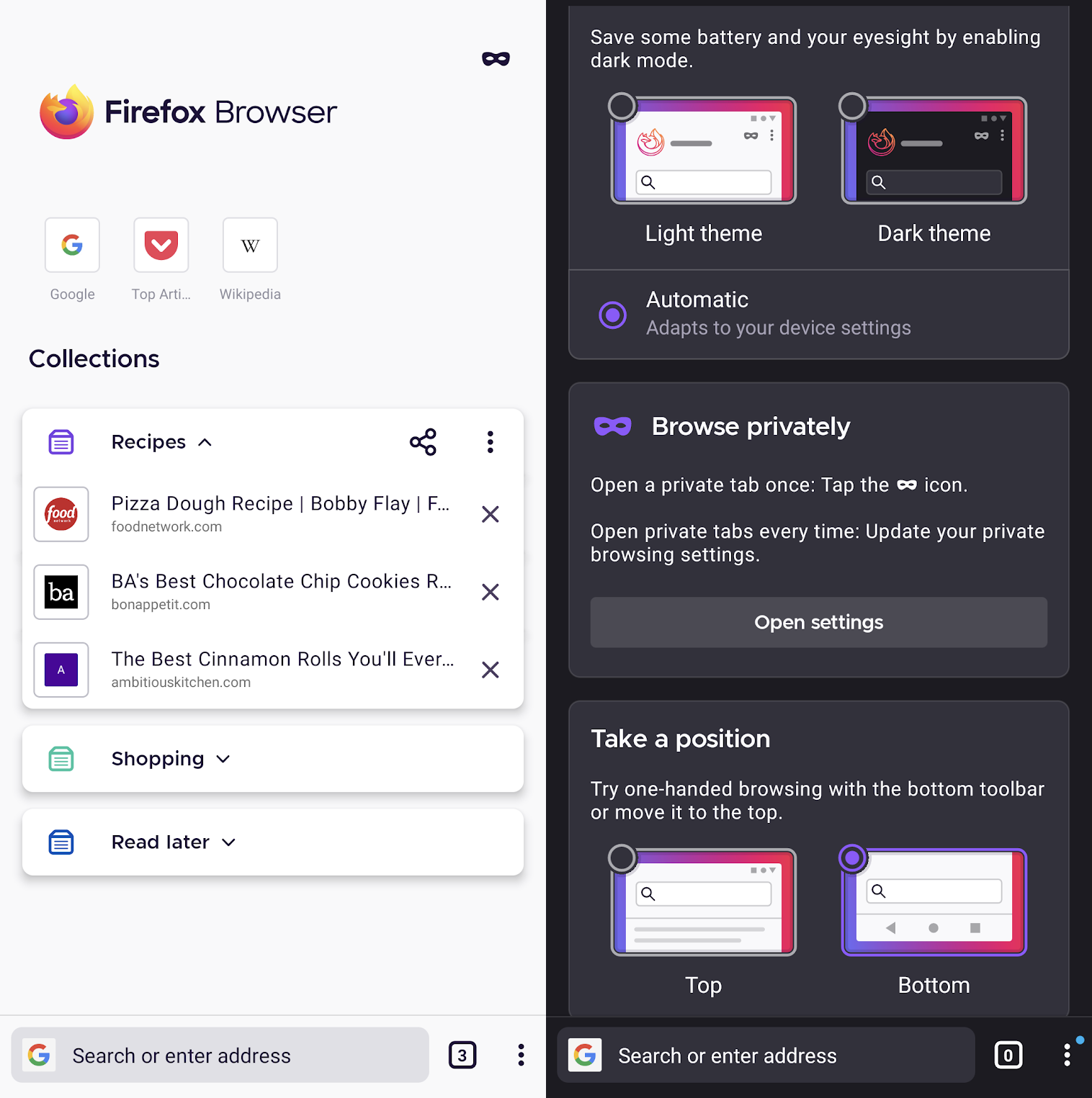 You can set the URL bar at the top or bottom (default), which is particularly useful on large smartphones. Firefox for Android also makes it easy to toggle between Light and Dark themes, or you can choose an automatic switch that follows your Android setting so the browser switches to dark mode at a certain time of day.

There’s also a new bookmarking tool called Collections, which is meant to help you organize and curate online searches. Firefox Daylight lets you share Collections between your devices, so you can send more than just a single tab from your phone to your computer, and vice versa. The company plans to integrate Pocket into the feature. “We’re working on something called Smart Collections as we’re doing integration with Pocket,” Zare said. “We’ll have some of the top articles as a default collection but then we’ll also have the Smart Collection that will recommend content based on the Collections that the user has manually created.”

To be clear, Firefox for Android already had add-ons, but the experience was poor. “The way it worked before was that any Android user could just go to AML and install any plugin. But oftentimes it was not available on Android or it didn’t work well on Android. They just thought it was buggy, and they didn’t have a good user experience or it didn’t do what they intended for it to do. So we wanted to be a lot more mindful about this implementation and slowly roll out addons that have passed the compatibility and security benchmarks that we’ve set.”

Firefox pioneered add-ons (now commonly known as extensions) on desktop. Mozilla is trying to do the same on mobile, but it’s going to take time to get it right given mobile’s limitations and unique considerations like battery life. By the end of the year, Mozilla is aiming to have only 30 add-ons, depending “on how fast we work with individual developers.”

In October 2018, Mozilla switched Firefox Focus for Android to GeckoView, its own mobile engine. This brought performance improvements, though it increased the app’s size from 4MB to 38MB.

“We chose Firefox Focus to be the first to use the new GeckoView engine because it allows easier integration of Focus’ well-known privacy features,” a Mozilla spokesperson told VentureBeat at the time. “Since this is still a new engine, we will gradually enable it for users. Then, we will explore the possibilities of using the new engine on other Firefox browsers and apps on Android.” 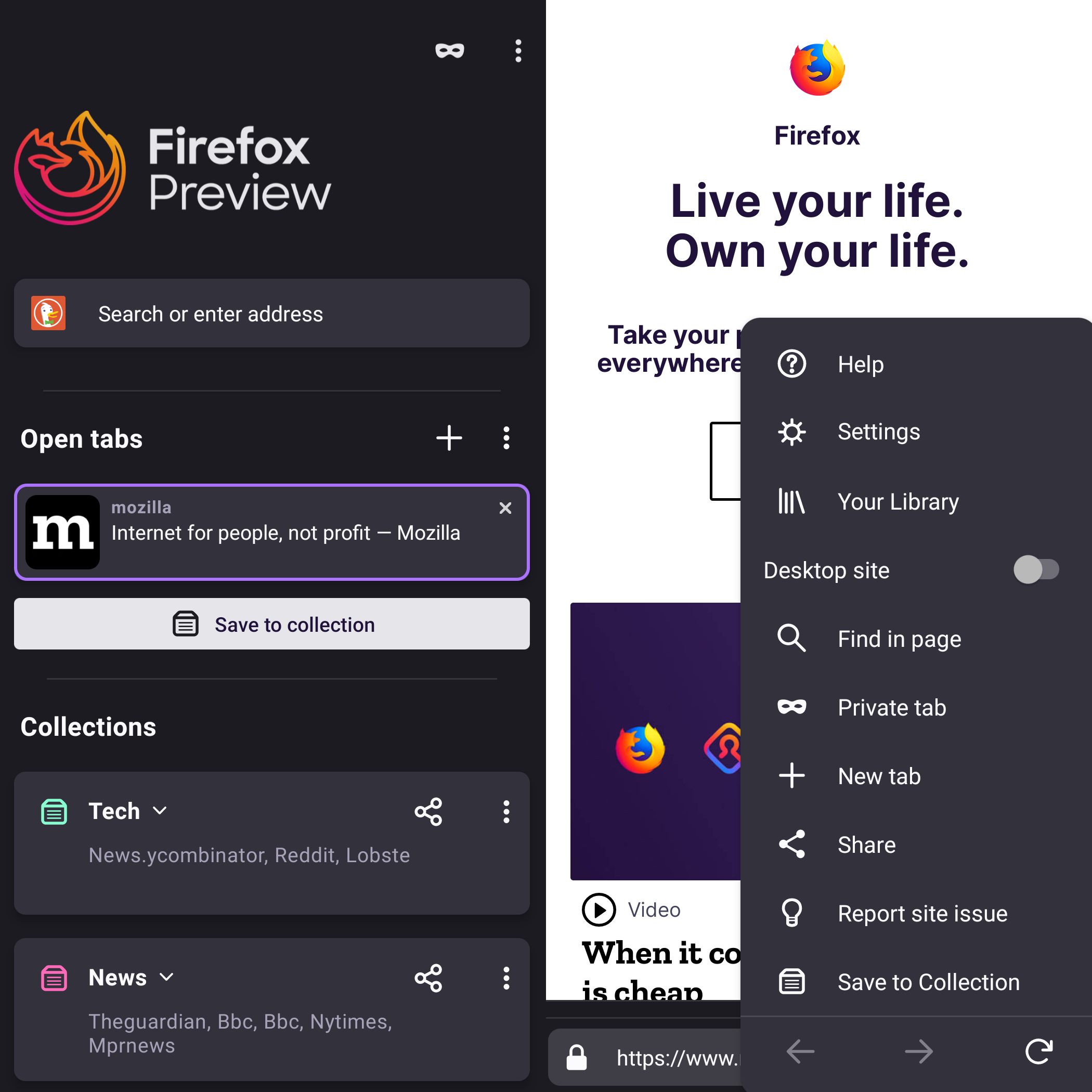 In June 2019, Mozilla announced it was bringing GeckoView, which it describes as the “high-performance, feature-enabling motor that fuels our Focus app,” to Firefox. The change also allows Mozilla to rely less on Google.

“While all other major Android browsers today are based on Blink and therefore reflective of Google’s decisions about mobile, Firefox’s GeckoView engine ensures us and our users independence,” the company said then. Aside from add-ons, GeckoView is arguably the biggest differentiator for Firefox on Android. Brave, Chrome, and Edge are all based on Google’s mobile engine Blink, while GeckoView gives Mozilla “complete freedom of choice when it comes to implementation of standards and features.”

In practice, Mozilla says GeckoView translates to faster browsing for users (the browser loads 10% faster than its predecessor) and independent control for “which privacy and security features we want to make available.” In fact, Enhanced Tracking Protection would not have been possible without GeckoView, Zare said.

GeckoView means Mozilla will be able to release Firefox for Android updates faster than ever. Mozilla this year transitioned Firefox desktop releases to a four-week cadence (compared to six to eight weeks for its competitors). On mobile, it will stick to that cadence, but it might also be able to push out updates even faster in some cases.

“Another really good advantage of us building this browser the way we built it is that now we’re going to be able to do very quick releases,” Zare said. “It helps us become a lot more agile, so we could potentially just do releases every two weeks. We could have new addons every two weeks. This is something that we were not able to do in the old browser. We’re going to keep the same version but we’re probably going to have a lot more ‘dot’ releases just to make sure that we’re constantly engaged with our users, fix bugs, and ship the fixes. It could also bring minor features, changes, enhancements, and improvements.”