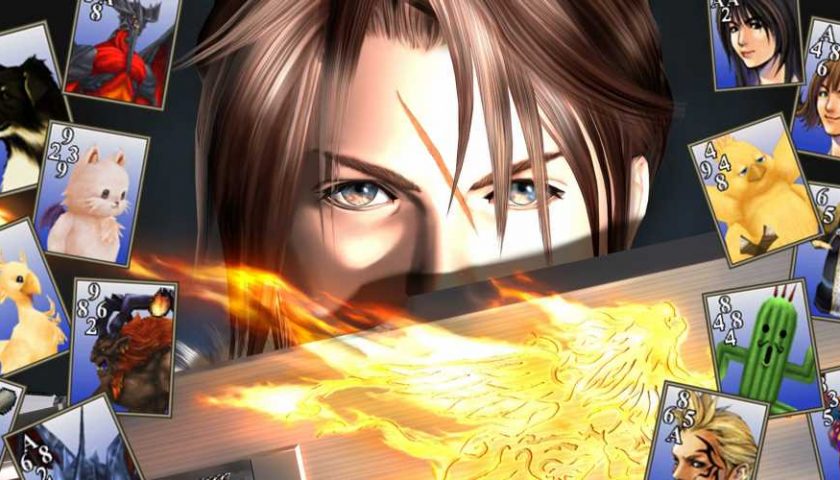 Every couple of years I feel the urge to replay Final Fantasy 8, and every time I do fall into the same trap. Your first objective is simple: meet Quistis, your teacher, at the front gate of mercenary school Balamb Garden. Squall is late for his appointment at the Fire Cave, where he has to defeat Ifrit to enter the next stage of his SeeD training. Time is running out—the field exam is tomorrow—but I have other things to do. Disregarding the pressing urgency of the plot, every time I play this game I spend at least 2 hours playing Triple Triad. It makes no sense from a story perspective. Or maybe it does. Squall is a bad boy rebel after all. But Quistis is gonna be waiting at that gate till I build a nice starter deck.

Minigames don't get much better than Triple Triad. Designed by Takayoshi Nakazato, Final Fantasy 8's battle planner, it involves using numbered cards to dominate a 3×3 board. Each card has four numbers in the top left corner, corresponding to one of the four sides of the card. If the number touching your opponent's card is higher than theirs, their card will be captured and flipped to your colour. When both players' decks have been played, and you've flipped more than your opponent, you win—and you get to take one of their cards as a reward. It doesn't sound like much written down, but in practice it's deeply compelling. All it takes is a few wins, and a few decent cards, to draw you in. 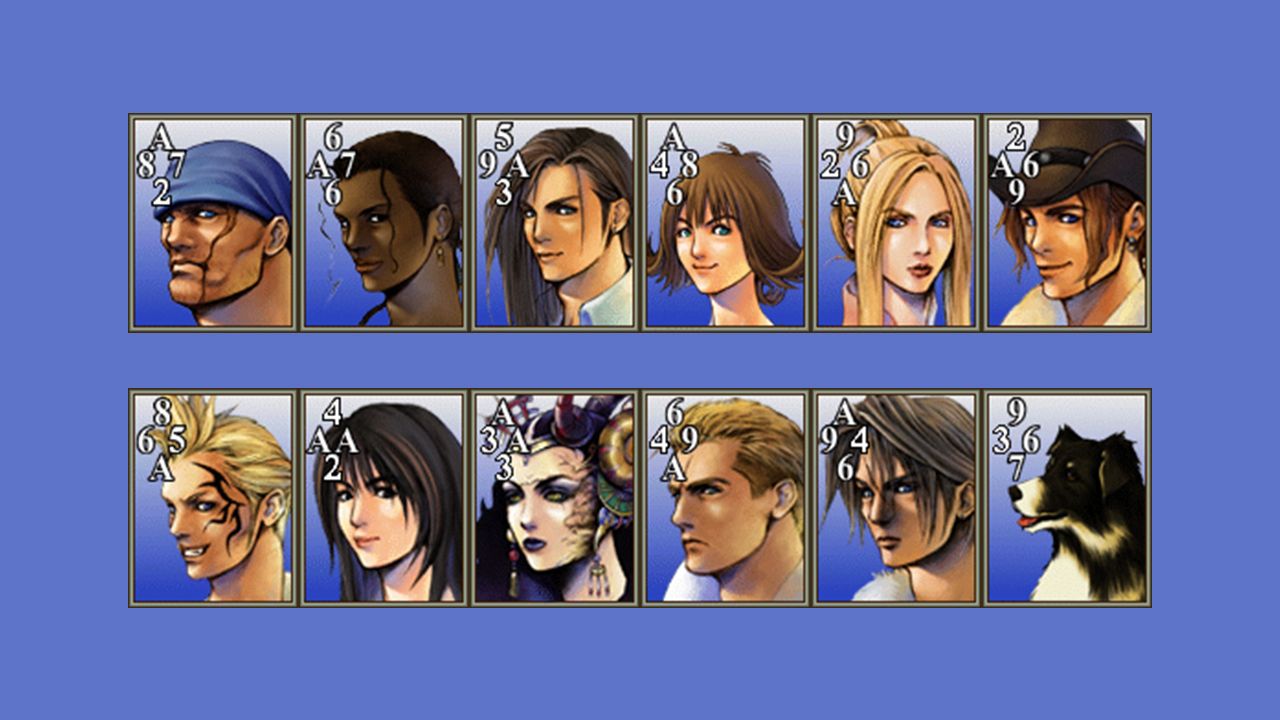 Minutes into the game a student gives Squall a very basic deck of low-level Triple Triad cards. When this happens, I immediately head to the lobby of the Garden and find the kid running laps. He has a very solid collection of cards—including Minimog, the earliest rare card it's possible to find. This has two 9s on it, which immediately makes your deck more formidable. I spend a few hours repeatedly playing him, taking his cards and giving my collection a boost. Once I've cleaned him out, I'm ready to go meet Quistis. I simply cannot play the game any other way. The adventure doesn't start until I've absolutely monstered this random kid at cards and taken his no doubt prized Minimog away from him.

As soon as that Minimog drops, I'm hooked all over again. Similar to Magic: The Gathering (the popularity of which inspired director Yoshinori Kitase to include a card game in FF8) there's a compulsive collection aspect too. As well as a huge number of unremarkable cards based on the game's heaving bestiary of weird monsters, there are rare, powerful cards for all the main characters and Guardian Force summons too. Getting these often involves straying away from the critical path and beating certain NPCs at cards—and in some cases even losing cards. Finding every card is an epic side quest unto itself, and once you get the idea of completing the collection in your head it's hard to shake it.

If an NPC is into Triple Triad, pressing Y next to them initiates a game. It's a popular hobby in this world, so most people are down with it—which means a card-obsessed player will be constantly checking every person they meet to see if they're up for a game. Even if you've just experienced a world-shaking event of cataclysmic proportions, or are standing in the smoking rubble of a destroyed building, it doesn't matter. Someone will always be up for a bit of Triple Triad. But be careful: not everyone is a pushover like the jogging kid. There are some elite Triple Triad players in Final Fantasy 8, including members of the enigmatic Card Club. Beating them is another great card-related sidequest. 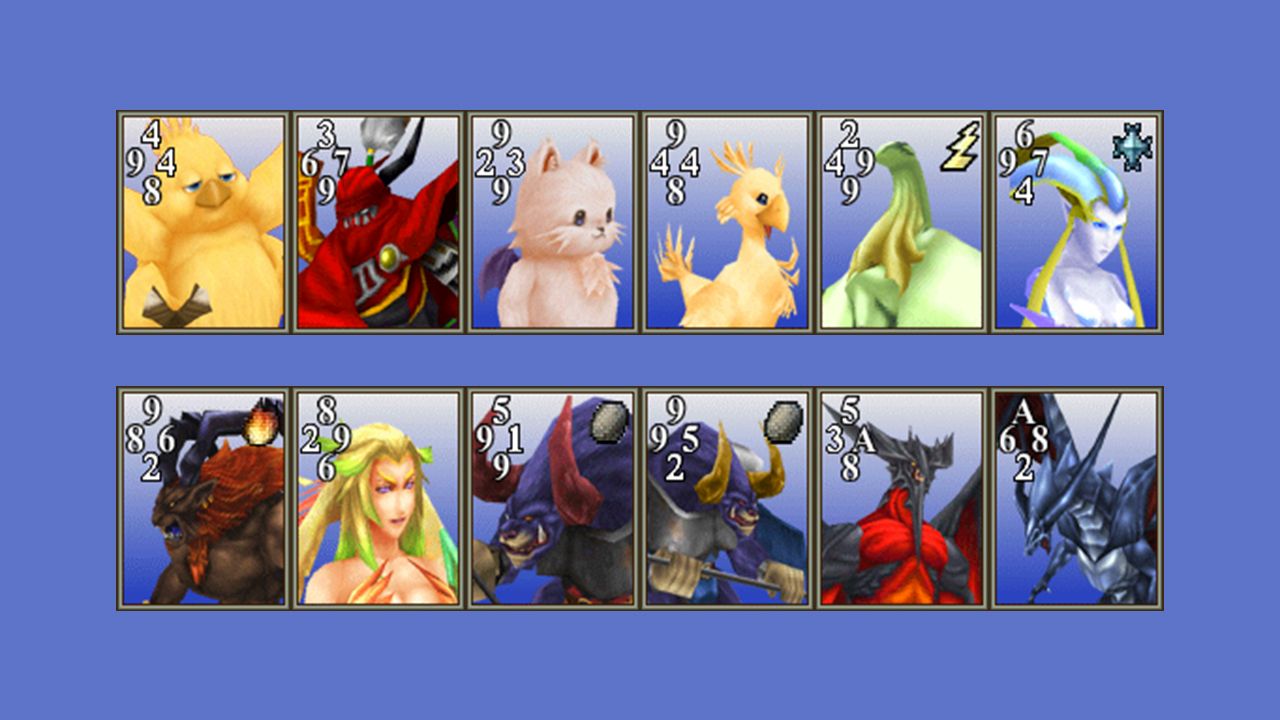 Things get more complicated when rules come into play. Each area of the world has its own distinct way of playing Triple Triad, and some of these differences can be extremely frustrating—especially when they start spreading between regions. The Random rule is the worst of the lot, denying you the ability to choose your own deck before a game. There are others too, including Elemental, Combo, Plus, Sudden Death, and Same, some of which can dramatically alter the flow and strategy of a game. If you have money to burn you can pay the Queen of Cards to spread or abolish rules, but her services ain't cheap. There are so many layers to Triple Triad that calling it a minigame feels almost insulting.

This time I'm playing Final Fantasy 8 on Switch, which is a perfect fit for Triple Triad. I'm playing it more than ever, using handheld mode to squeeze a few games in at every opportunity. The downside of this is that the bong-a-bong-a-bong of Nobuo Uematsu's ridiculous earworm of a Triple Triad theme, Shuffle or Boogie, is constantly bouncing around in my head. I've played a lot of card-based minigames over the years. Caravan in Fallout: New Vegas, Gwent in The Witcher 3, Pazaak in Knights of the Old Republic. But none of them have captured my imagination quite like Triple Triad. I'm getting itchy to play it right now, in fact. My Switch is sitting next to my keyboard, calling out to me. Well, maybe just one round.