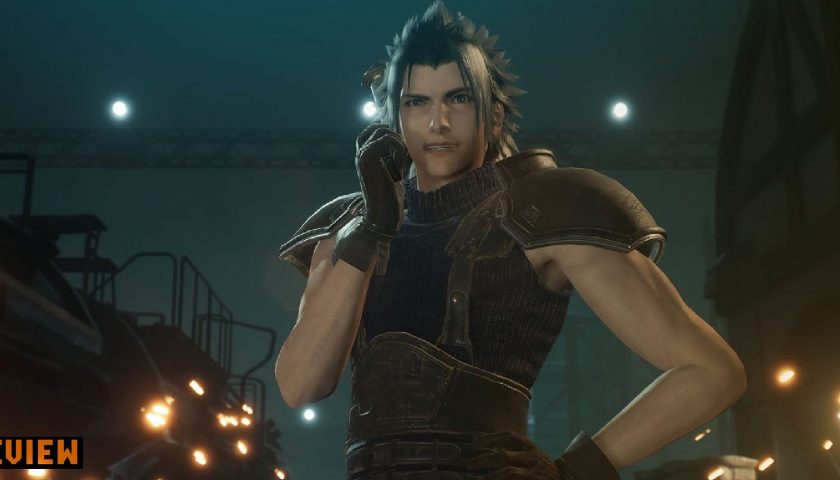 Crisis Core is an acquired taste, and Reunion doesn’t make an effort to change that. Peer beneath the gorgeous new visuals and excellent presentation and you’ll find a JRPG pulled straight from 2007, complete with archaic level design, a repetitive battle system, and weird design decisions that highlight the restrictions it was dealing with all those years ago.

Those hoping for a reimagining on the scale of Final Fantasy 7 Remake will be let down by what’s on offer here, despite many of the characters and environments stealing textures and details directly from the beloved revival. A clear effort has been made so Reunion exists in the same world, with events having a tangibly canon impact on what’s to come in Rebirth. In many ways this feels like necessary reading for newcomers, and a nostalgic revisit for those who grew up with this flawed yet ambitious spin-off, which is campy and self-indulgent to a fault.

I grew up thinking Advent Children was the coolest film ever, making Bebo quizzes for my equally cool friends to test their knowledge and watching it over and over, oblivious to its mediocrity. Nowadays I can see it’s a bit rubbish, but Square Enix continues to use it as the bedrock for all things Final Fantasy 7. Crisis Core is an expansion of its narrative and visual ideas, with character designs clearly inspired by its droll, melancholic perspective and writing filled with awkward melodrama and nonsensical lore that only serves to make the original far more complicated. A modern coat of paint only calls attention to how odd it’s always been. 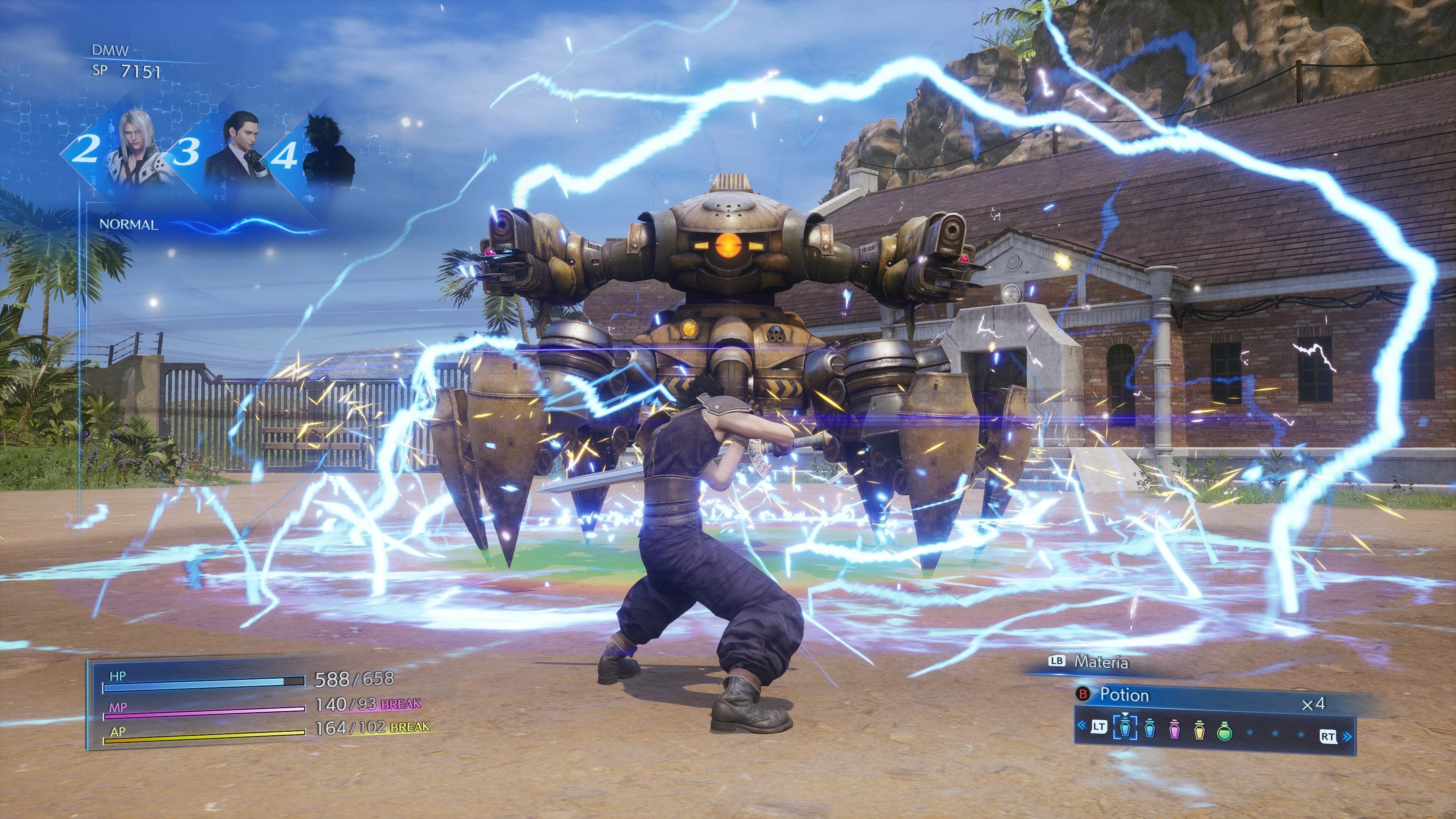 Zack Fair is a second class SOLDIER eager to serve the dystopian corporation that signs his paycheck, looking up to a mixture of skilled yet equally misguided superiors in Sephiroth and Angeal. The opening hours paint our hero as a man with true golden retriever energy, eager to please even if the end result means firebombing a rural village or aiding in the expansion of corrupt experiments that only serve to hurt innocent people and boost profits. He is none the wiser, and doesn’t begin to question it all until those he cares for start getting caught in the crossfire.

All of a sudden a strange man called Genesis walks into the picture, and we meet the likes of Aerith, Cloud, and myriad familiar faces that turn Crisis Core into a trip down memory lane lined with bittersweet consequences. I don’t think it’s a spoiler 15 years after the game’s initial release to say it all ends with Zack’s apparent death, fighting against an endless army of Shinra soldiers in a bid to protect his friends from a tragic fate. Remake reverses that big twist ending, and thus recontexualises what this spin-off was always meant to be. With the defining gut punch now absent, is the experience left behind worth delving into in spite of its shortcomings? Just about, especially for fans who want more from this universe regardless of the package it comes in. Reunion is gorgeous, awash with fluorescent hues of blue and green alongside enhanced character models that sit perfectly next to the Remake’s stylized yet more realistic depiction. Sadly, this new presentation can’t pull away from a moment-to-moment formula that is painfully old school. Combat arenas are always telegraphed, while the majority of levels are either truncated hubs or a generic mix of fights, cutscenes, and puzzles, that serve little purpose beyond grinding for extra levels and moving the story along. That is your main drive here, since the rest is just busywork.

Those jumping into this directly from Remake will find a refreshingly familiar combat system, albeit with less depth and a few distinct twists. Everything is driven by the Digital Mind Wave, a super edgy and super cool virtual slot machine that has absolutely no justification in the narrative, but is here anyway because I’m guessing Crisis Core needed a cool gimmick that didn’t just recycle the materia system before calling it a day. DMW also sounds like a cool nu-metal group that would be just perfect for 2007. Hollywood Undead vibes. 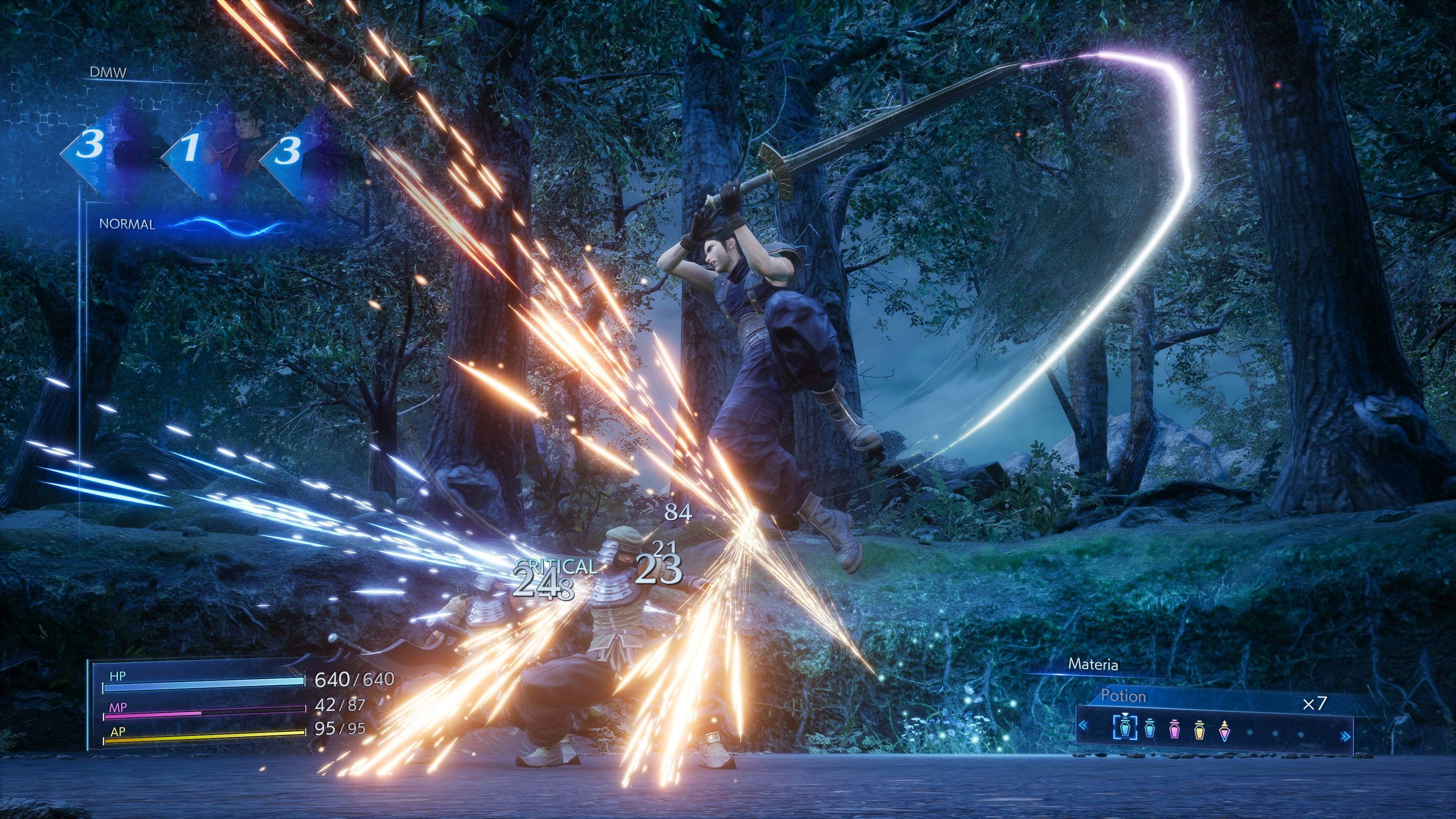 It’s responsible for limit breaks assigned to certain characters – roll three Sephiroths in a row, and you’ll view a bite-sized cutscene before unlocking a special move – or temporary buffs to defence, AP, or MP that can make getting out of a tough spot all but trivial. On the surface it’s a compelling foundation to build a combat system upon, but once you nail a combo it’s merely a case of knowing weaknesses and swinging away until everything dies. There is a single attack button, and I grew tired of the flow long before the credits rolled. It still works though, and side missions create a decent number of substories to unlock new techniques and gain greater understanding of who exactly Zack is and how his job impacts the wider landscape. Turns out this happy-go-lucky twink is capable of war crimes.

We’re a human weapon for a corporate superpower, so of course the grunts beneath and general populus either view us as misunderstood idols or part of the problem. Most side quests, which are accessed through a generic list at save points, involve killing random monsters and calling it a day, but others have narrative significance and paint a detailed picture of this world that goes beyond bloating the game’s playtime.

You’ll likely need to play these to prevent the main quest from battering you, so it’s a relief that cookie-cutter missions are given narrative context that actually matters. It’s fascinating to see the catalyst to Remake’s more socially conscious political commentary, and how Final Fantasy 7 has always been a game about bringing corrupt powers to justice by any means necessary. Square Enix has never distanced itself from that message, and standing in the shadow of Remake allows Crisis Core to shine even as its gameplay suffers. There’s much to admire here, even as I was constantly making peace with a portable gem polished to sit on a modern generation that only serves to highlight how much we’ve left it behind.

Final Fantasy 7: Crisis Core Reunion is an excellent remaster that evolves the original game in ways I didn’t think possible, but even that can’t take away from an experience that even in 2007 was holding itself back to satiate the platform it called home. The repetitive combat and clumsy environmental design serve to make this otherwise spectacular world feel strangely artificial, while its campy dialogue and archetypal character writing doesn’t exactly gel with the remake it serves to apply greater context to. New audiences deserve to play this game, and I’m so glad they finally get that chance, but eventual wish fulfillment doesn’t lessen the hurt of inevitable disappointment. Zack is still an adorable puppy I need to protect, though.