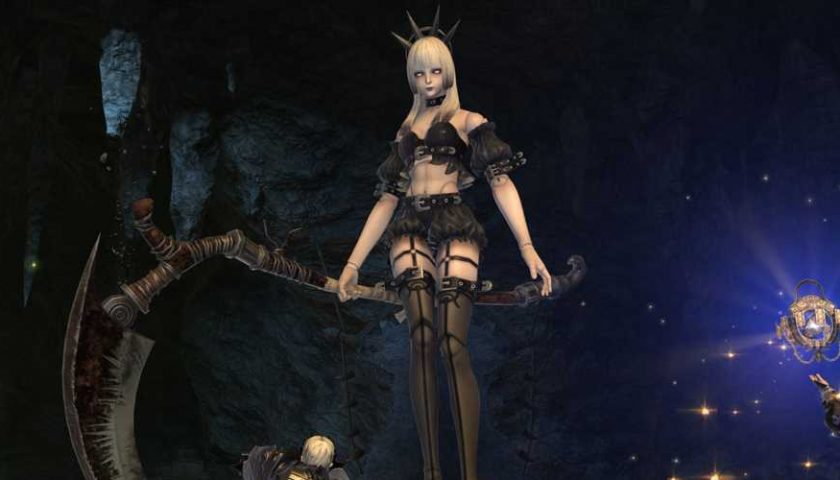 Move over Lady Dimitrescu, there is a new goth girlfriend for gamers to thirst over! In a preview for the upcoming Final Fantasy 14 update, Square Enix shared some images from the new dungeon being added. Those images include a look at the dungeon’s boss, which happens to be a midriff-showing goth girl wielding a nasty-looking sickle.

A new website for the game’s 6.3 Patch details all the goodies coming to the popular MMO. This includes the new Lapis Manalis dungeon where the goth boss can be found. Unfortunately, beyond a Tinder-worthy photo, not much is offered on what this long-legged lady brings to the game. However, a short description of the dungeon reveals that “in pursuit of voidsent, you learn of an abandoned village in the mountains of Garlemald where Garleans once practiced the reaper arts.” Looks like that gnarly sickle she carries has more meaning then just tying her outfit together!

Of course, the new boss has gone over well with Final Fantasy 14 players. The folks over at GamesRadar compiled a short list of tweets from folks thirsting over her. They range from jokes asking if she is single to others being outraged that Square Enix would show off the woman without offering more. This new boss seems poised to take the crown from Resident Evil Village’s Lady Dimitrescu as the Internet’s questionable girlfriend.

Elsewhere, the update is bringing another woman to the MMO. A new main scenario quest introduces “a half-voidsent woman named Zero”. She will return with players to the Source and aid them in continuing the sear for Azdaja. The update also adds a new Unreal Trial called Containment Bay P1T6 where players take on the eikon Sophia once again. Of course, this is all just background noise to the real star of the update: mystery goth lady!