Triple Triad is a mini-game that originated in Final Fantasy 8 and it quickly became a fan favorite from all of the mini-games offered in the series. Therefore, it was no surprise that Final Fantasy 14 players were delighted when it was added to the popular MMO with the addition of the Gold Saucer area.

Players are able to play Triple Triad with set NPCs as well as players, with new NPC challengers and new Triple Triad cards regularly added to the game via updates. For everything that you need to know about how to unlock the game, play it, and where to find people to challenge, check out our guide just below! 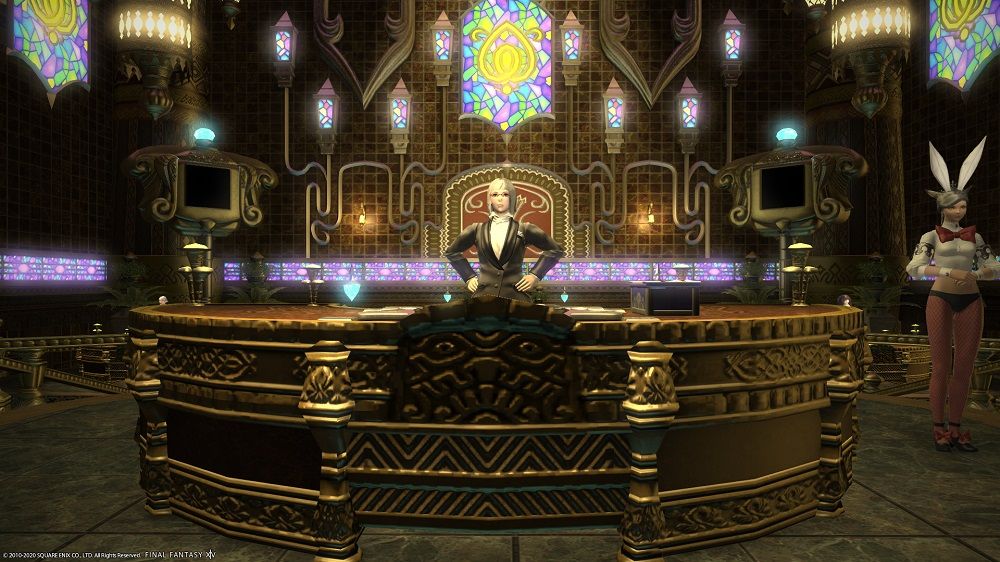 To get access to the Triple Triad mini-game, you’ll first need to unlock the Gold Saucer. To do this, players must have completed one of the following main scenario quests:  The Gridanian Envoy, The Ul’dahn Envoy, or The Lominsan Envoy. After this, head to Ul’dah and speak to the Well-heeled Youth at the Steps of Nald (X:9, Y:9) to start the “It Could Happen to You” side quest. You will be given a golden airship ticket that you can use at the Airship Landing to travel to the Gold Saucer, after which, you can simply attune yourself to the Aetheryte Point that is there for faster travel.

After completing this quest and arriving at the Gold Saucer, head to the Card Square and speak to the Triple Triad Master at (X:4.1 Y:7.4) to begin the quest “Triple Triad Trial”. You will be given an introduction to the card game and then a handful of cards for you to be able to build your first deck. The cards aren’t great, but they’ll get you started.

How to Play the Basic Game 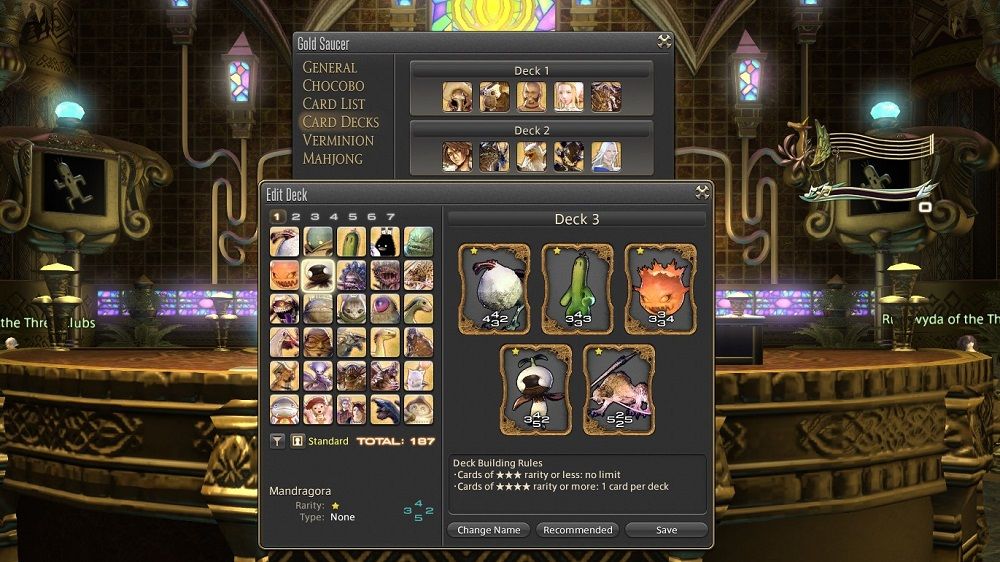 You need to use the card items in your inventory to be able to utilize them properly, after which you can create decks via the Character menu option, then select Gold Saucer, and finally select the Card Decks category. You can create up to five decks in total, and each deck can only have one card that has a rarity of four stars or higher.

To challenge NPCs, you’ll need to pay a small MGP fee. If you have yet to earn any MGP, you can purchase some from the MGP Exchange Gold Saucer Attendant at (X:4.8, Y:6.7). You can only buy MGP if you have less than 500 MGP in total. Challenging other players does not cost MGP, but you also cannot receive cards as rewards from them.

We’re going to cover the basic rules of Triple Triad and then explain some of the other rules that come into play. Triple Triad is a card game played between two people, the player and either an NPC or another player. Each participant has a deck of five cards and deciding who goes first is done at random by flipping cards at the beginning to see who is represented more, the red or blue player. 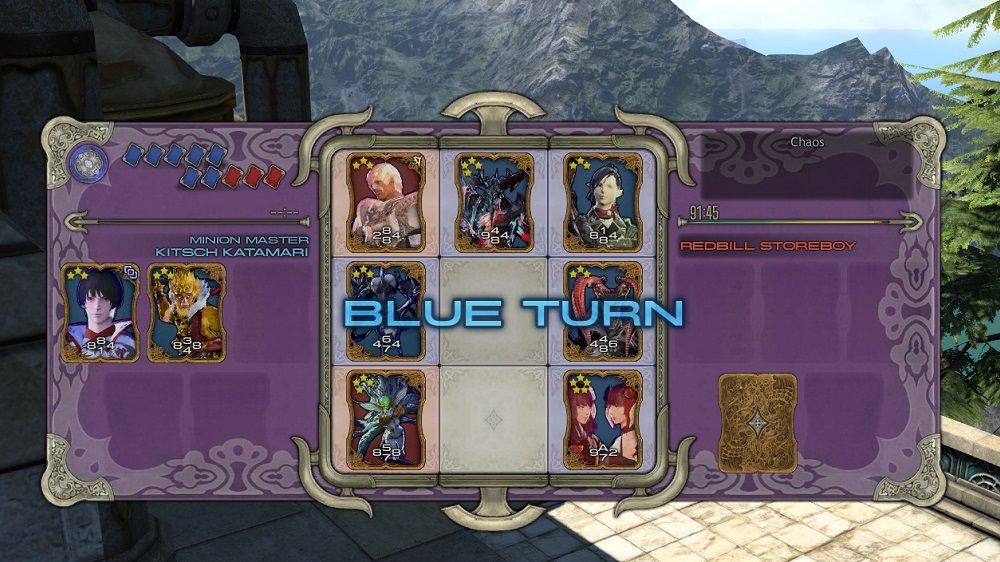 Players then take it in turns to place their cards on the grid. Each card has a number on all four of its sides, and when a card is placed next to another card, the numbers are compared to the adjacent number on the neighboring card. If the number on the card being placed is higher than the card already on the grid, the existing card will be flipped and “captured” by the player, turning it into their respective color.

Players will continue until the grid is full, with the aim of the game being to capture as many cards as possible. The grid only holds nine cards in total, however, the tenth card that is not played is still counted in the player totals at the end of the game. Players have a total of 90 seconds to play their moves throughout the entire game, though each turn they are given a five-second window that does not affect the timer. Should the timer run out, your next move will automatically be played for you, and in subsequent turns, you will only have your five-second grace window to play before the same happens again. 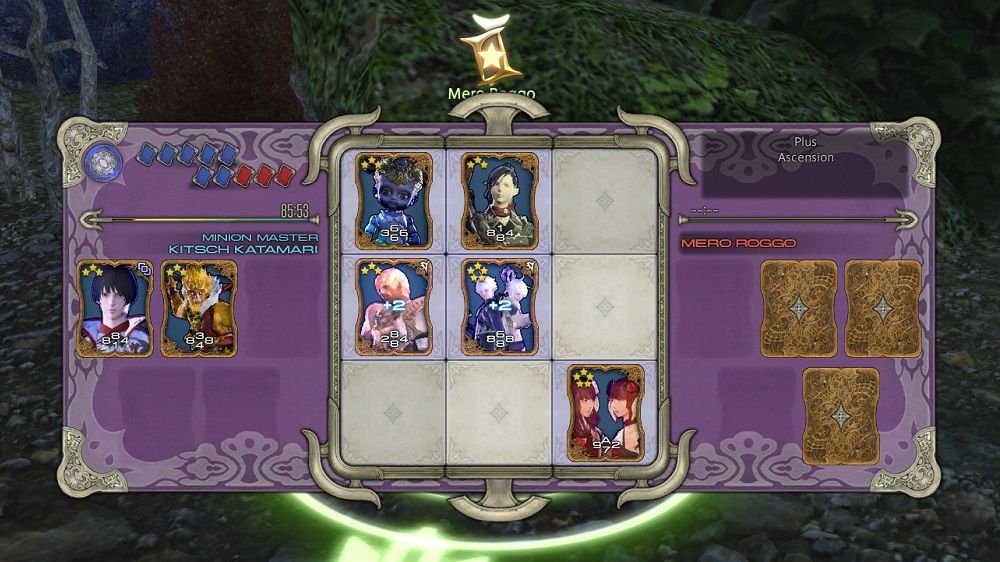 As you travel throughout Eorzea and battle different NPCs, you will come across various Triple Triad rules that change how the game is played. These are called Advanced Rules and they fall into two categories, either Regional Rules or Match Rules. When you choose to challenge an NPC, you can view which rules are in effect before commencing a game.

Regional Rules: These differ depending on the location in the game and reset daily at 7 am PST/10 am EST. There can be up to two Regional Rules in play at any given time.

Match Rules: These are set by the NPC you challenge, or by yourself when challenging other players. Again, only two Match Rules can be in play at a time. 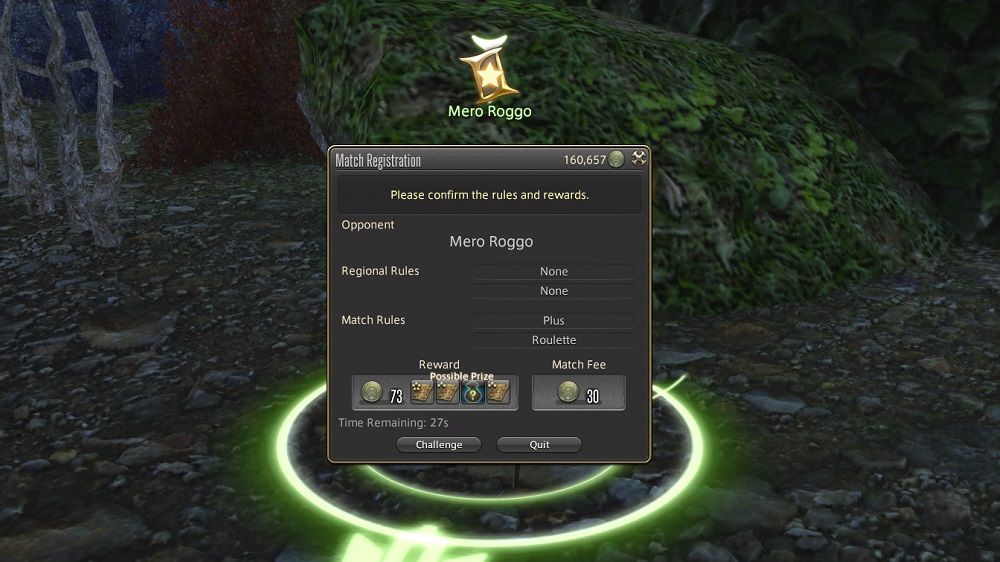 Here’s a breakdown of the Advanced Rules:

Where to Get New Cards 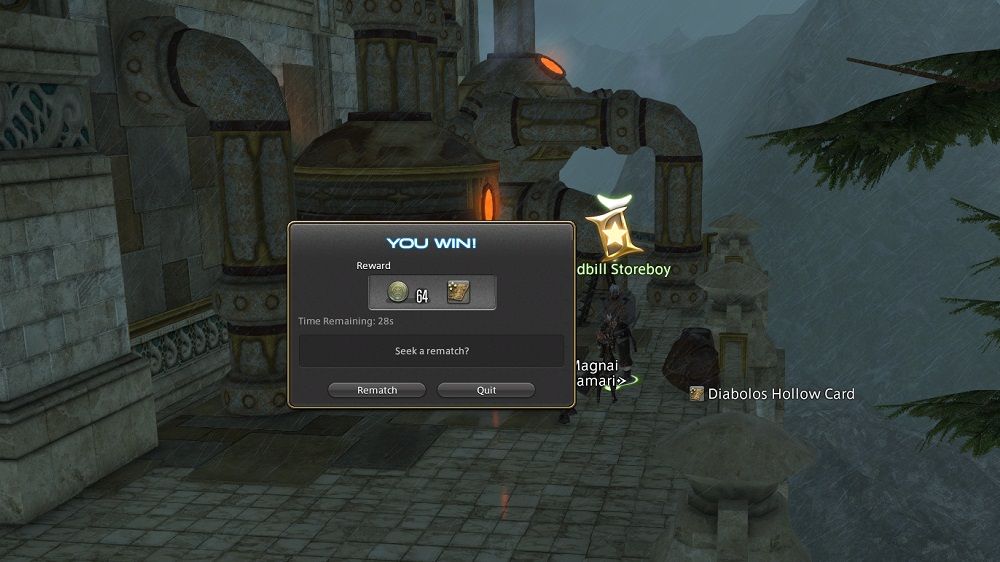 There are a variety of ways to get new Triple Triad cards so that you can build better decks, with cards varying in rarity from one to five stars. Here’s a list of possible places you can find new cards: 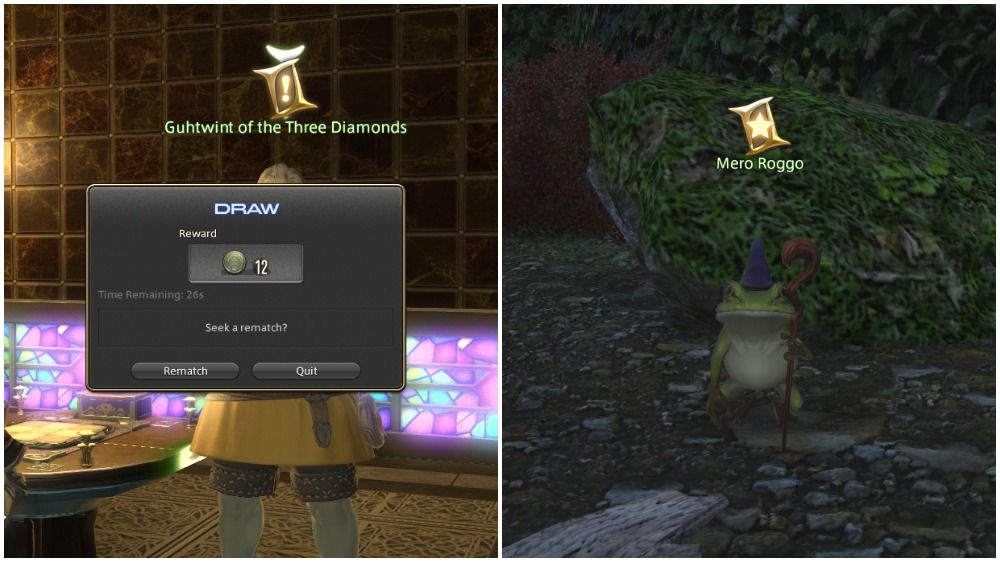 NPCs with the Triple Triad exclamation mark over their heads can be selected and then challenged to a Triple Triad match. Once you have had at least one card match with an NPC, the icon will change to a star if there are still cards that you have yet to win from them. These icons will also be displayed on your map. Once you have won all possible rewards from a certain NPC, their icon will vanish from above their head and from the map.

Some NPCs will only play Triple Triad with you after you have progressed past certain main scenario quests or certain side quests. 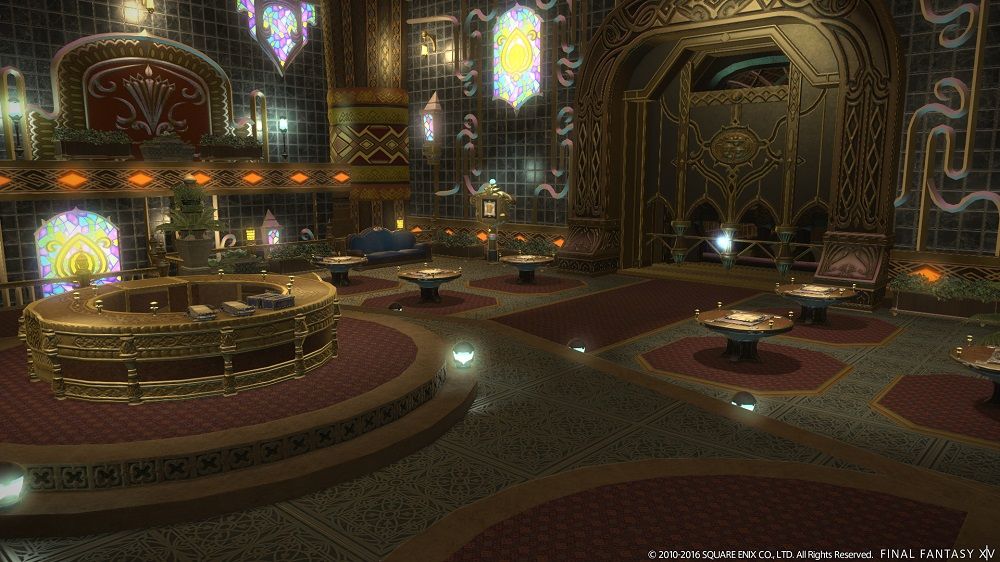 You can challenge other players by selecting them and choosing “Challenge to Normal Match”. There is no cost to challenging players, but you can win an MGP bonus up to five times each day. There are only certain areas where players are able to challenge each other to Triple Triad matches, these areas are as follows:

Additionally, players can travel to the Battle Hall, an instanced area where players from the same data center can challenge each other to Triple Triad matches. This area can be accessed at any time from the Duty Finder. As well as challenging other players here, if you speak to one of the Hall Assistant NPCs, you can choose to be matched at random. Match rules are chosen by the participants, using a combination of those chosen by each player. Each Battlehall instanced area is open for four hours. 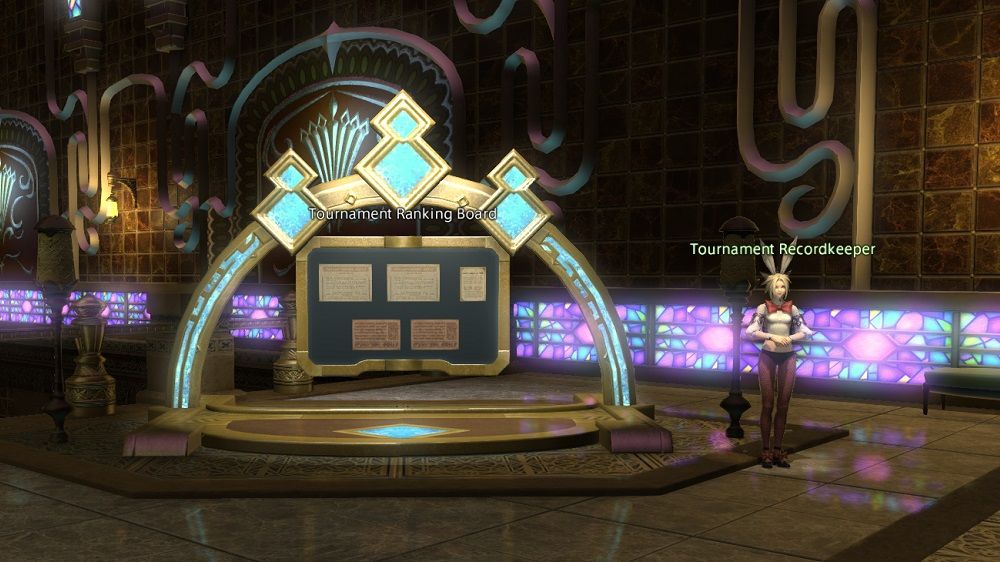 The Gold Saucer regularly holds Triple Triad tournaments that offer special and rare Triple Triad cards as rewards. You can sign up to participate with the Tournament Recordkeeper, found either in the Gold Saucer or the Battlehall. Once registered, you will be randomly matched with other players and will automatically be placed into subsequent matches unless you cancel out. NPCs in the Battlehall can also participate in tournaments. 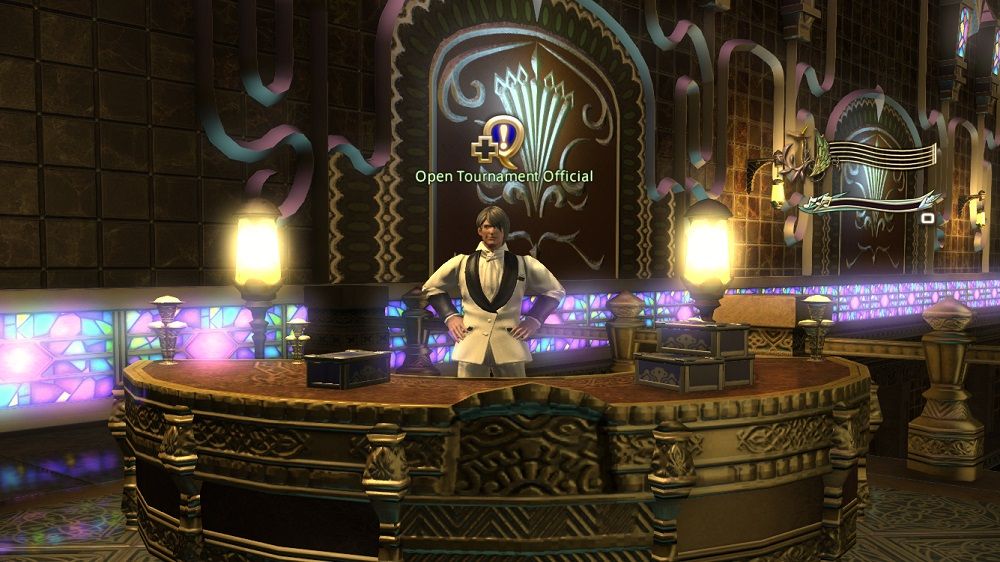 Additionally, there are Short Mode Tournaments available via the Open Tournament Official in the Gold Saucer (X:4.5 Y:7.4). After speaking with him and completing his side quest, you will be able to participate in both Open and Invitational tournaments.

Open Tournaments: Held periodically in the Gold Saucer, players must speak to the Open Tournament Official during the registration period. If there are not enough players who have registered, the remaining slots are filled by NPCs. During these tournaments, the Draft rule always applies, and rewards include MGP and card prizes.

Invitational Tournaments: These types of tournaments can be held at any time. Players simply have to form a party and reserve a Triple Triad Invitational Parlor via the Duty Finder. If there are not enough players, any remaining slots will be filled by NPCs. Rules are set by the party leader and there are no rewards for these matches. 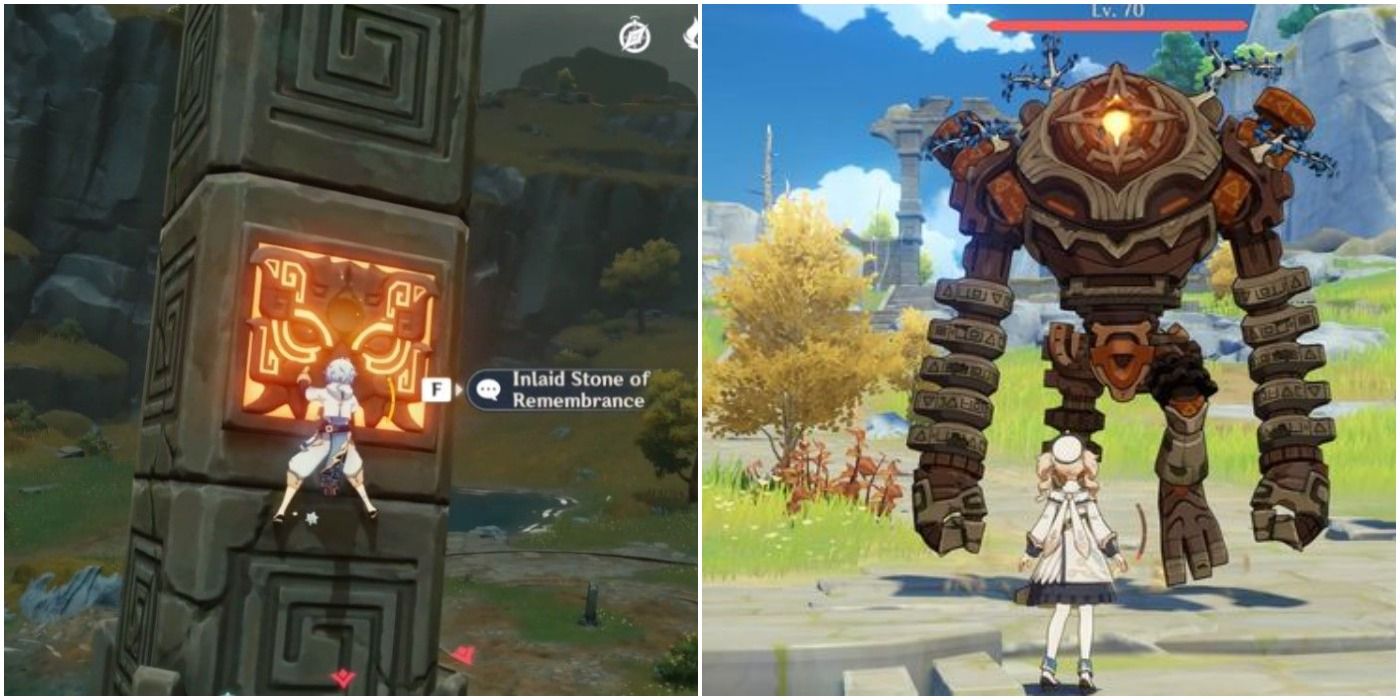