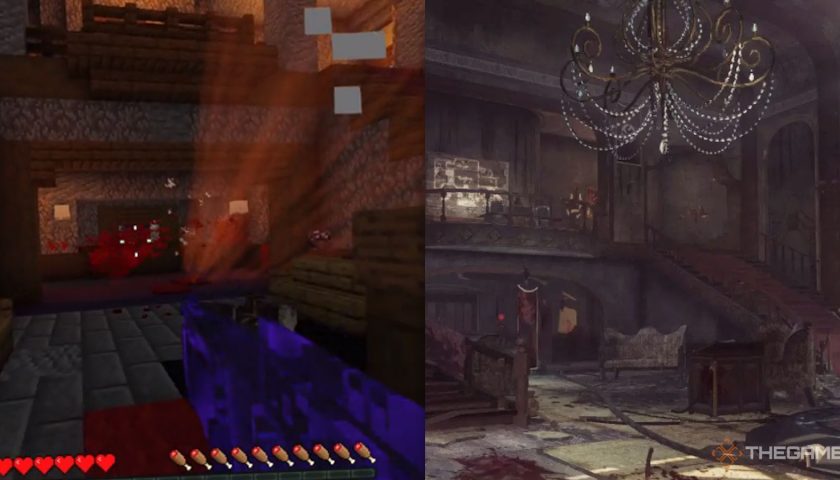 In an unmodded build of Minecraft Java, one dedicated fan has replicated Call of Duty: Black Ops’ Zombies map, Kino Der Toten. What’s more, it has a functioning Pack-a-Punch machine that upgrades your weapons.

It utilizes the enchantment effect to give it that purple sparkle, but don’t ask how putting it in the machine and getting it back out again works; the custom map uses a wealth of data blocks and commands to keep it all running, with thousands of lines of code. It’s a complex creation complete with its own resource pack.

“It’s a custom map I’m working on: I’ll keep posting updates,” creator Stentorious said, “You can’t play it yourself at the moment, as it’s still a work in progress.”

In the footage released, we can see Kino Der Toten meticulously recreated in Minecraft with the Mystery Box and it’s light – using a Beacon’s beam – along with the various rooms, wall buys, zombies, round counter, and even voice lines from the character who, in this case, is Dempsey.

The teleporter works the same way with you having to link both before being hurled off into the projection booth. In here, you can buy grenades and upgrade your gun. After that, the game even throws you into the interim rooms that normally have film reels laying about before you’re back in the thick of Kino.

What’s more, the footage shows that grenades are functioning as, from the projection booth, Stentorious lobs a few to kill some unsuspecting zombies. There’s also a point counter, but the poster said that they fudged the numbers a bit, likely to afford the likes of Pack-a-Punch to show off in this video.

Some have asked if they’d be able to pull off the same for Tranzit, but if Kino was tough, having a large map like that with a moving bus would no doubt take even more time and even more thousands of lines of command block code. But who knows? Maybe someone will step up to the plate and give it a crack.