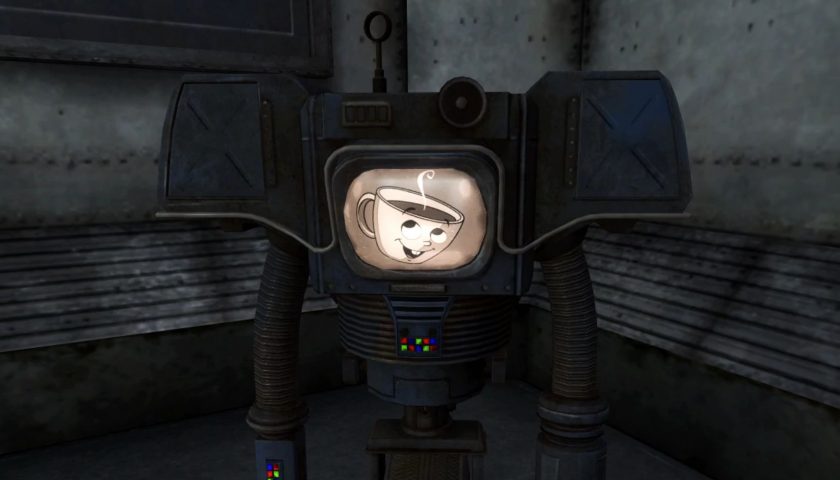 It's pretty widely accepted that the Fallout series wouldn't be nearly as successful if it didn't also have a massive variety of colorful characters to meet – Fallout 76's initial launch kind of proved this. Fallout fans have been highlighting the often overlooked citizens of the Wastelands, sharing their favorites on the series' subreddit, albeit in a roundabout way.

Instead of just simply naming their favorites, Fallout fans have been quoting them, giving us a good idea of exactly why they're as loved as they are. For example, Redditor WoodenRocketShip comments "Do you know how many coffee cups giant robot brains in jars use on a daily basis? NOT FUCKING MANY!" in reference to Muggy, a tiny neurotic Securitron programmed to have an obsession with mugs who can be found and talked to in the Fallout: New Vegas Old World Blues DLC.

In fact, Old World Blues gets quite a bit of love in this thread, as Redditor Calamity_Arcade quotes "A toaster is just a death ray with a smaller power supply," referencing Toaster, a talkative kitchen appliance bent on destroying the Earth. Other picks from Fallout: New Vegas include Mr. New Vegas – although you only get to hear his voice over the radio – and the terrifying but lovable doctor Ada Straus.

It's not all about Fallout: New Vegas though, as another popular choice from one of the older Fallout titles is drill sergeant Arch Dornan from Fallout 2. If haven't played them, he's a drill sergeant whose personality has been compared to that of the infamous drill sergeant from Full Metal Jacket played by Ronald Lee Ermey. There are several fans in the thread reminiscing on the times Dornan called them a "mo-ron" and screamed at them to get in uniform.

There are plenty of characters mentioned in the thread, highlighting just how great a series Fallout has been over its long history. If they haven't been mentioned here, then they'll likely be in that thread somewhere, but none of them hold a candle to Rex. He's the goodest boy.