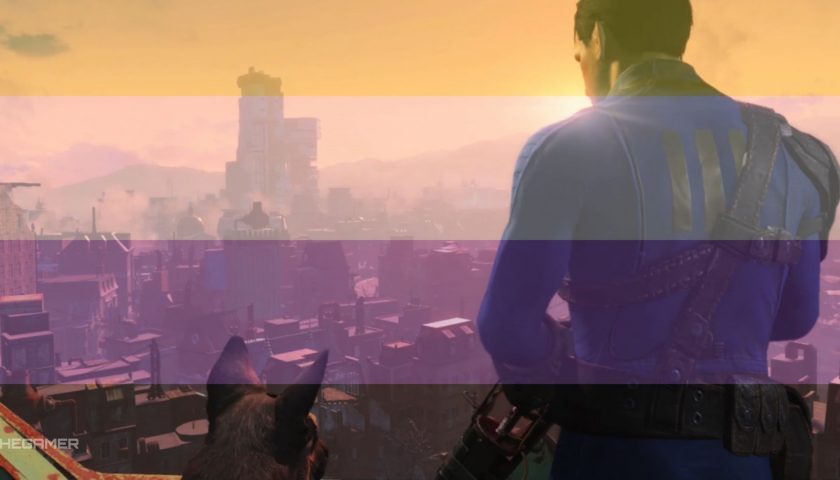 From an LGBTQ+ perspective, Fallout 4 was a bit of a mixed bag. While it brought romances to the series, not gating any of them behind gender, it isn't actually possible to play as a character who is gay or asexual. If you're a woman, you have a husband, and vice versa.

But thanks to this mod from Nexus user LeahTheUnknown, you can finally add some diversity to the Commonwealth. Most gendered pronouns in Fallout 4 can now be changed to they/them, making it possible to play as a Sole Survivor outside of the gender binary.

Right now, the mod only affects the text in-game, not voice lines. But it means the correct pronouns should show up in the subtitles. In a time where gaming is slowly catching up with the world and recognising they/them pronouns in gameplay, this is a nice way to modernize Fallout 4's fairly dated LGBTQ+ rep, following the explosion of content we got in the 2010s.

Thankfully, Bethesda should be righting this wrong with its next big release. Starfield will let players pick from he/him, she/her, and they/them for their characters. A ton of dialogue has been recorded to accommodate for this, adding to the roleplay capabilities in this highly anticipated action RPG. Considering the announcement specifically mentioned choosing pronouns – not gender as you do in other Bethesda games – it's possible that gender will be much more fluid this time around. Fingers crossed, you'll be able to choose whatever pronouns you want, regardless of your character's appearance.

Starfield should be with us in just under a year's time, set to launch November 11, 2022. It's coming exclusively to PC and Xbox Series X/S, with no word on an Xbox One or PlayStation release. You will be able to stream it to your Xbox One, however, offering last-gen players a way to experience the game, albeit with some compromised quality.