Fallout 4 is the first of its series to allow players to give their characters facial tattoos. However, you cannot have a tattoo from the get-go of character creator. If you want a tattoo, you need to collect Taboo Tattoo magazines.

Each magazine unlocks a different tattoo design. There are five total magazines hidden in the vast map of Fallout 4.

2 The Tattoos And Their Magazine Locations 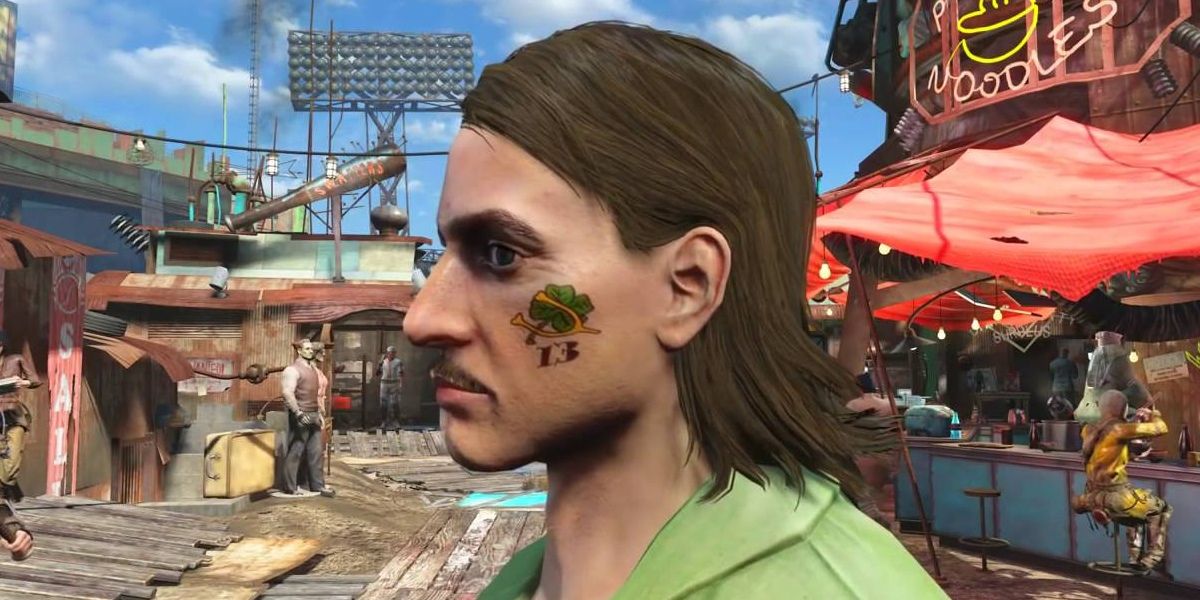 The first issue gives the player a clover tattoo on the check with a wishbone and the number 13. The issue is located is in the Mass Pike Tunnel, sort of. It is one of the more complicated magazine issues to obtain.

The station has some rail cars and you’re going to want to jump up them and to the roof of a building. From the side of the roof, you need to jump on crates to get to the other side of the building roof. On that side, there is a hole in the wall to get you into the building. There will be some Molerats to fight.

While there, be sure to unbar the door so that you can then go in and out of the building without jumping around. From that building, there is an entrance to the Utility Tunnel. You’ll meet some Radroaches and Molerats. You’ll find a hackable terminal but you don’t have to hack it. Just follow the wall and you’ll see someone blew a hole in it and you can stroll in.

You’ll find Det. Perry’s skeleton and holotape in a storage room. But what you are really here for is the magazine, and it will be sitting by the holotape. 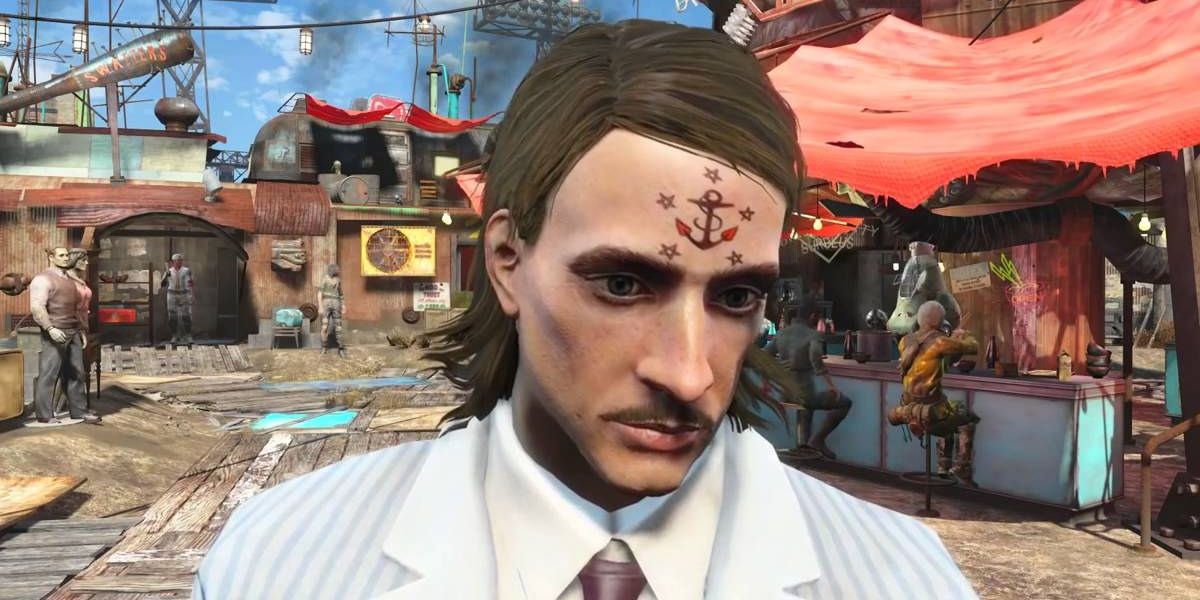 This magazine issue is far more simple to find than the first. The design is true to the name of the magazine issue, as it gives the player the option of an anchor tattoo on their forehead.

For this one, go to the Thicket Excavations, which is east of Sanctuary and south of the USAF Satellite Station Olivia. There is a friendly NPC there if you are visiting the station for the first time. If it is not your first time, then there is a chance that the place has been taken over by raiders.

There is a shack that is easy to get to without going deep into the excavations, and within it is the magazine. The issue will be on a desk. 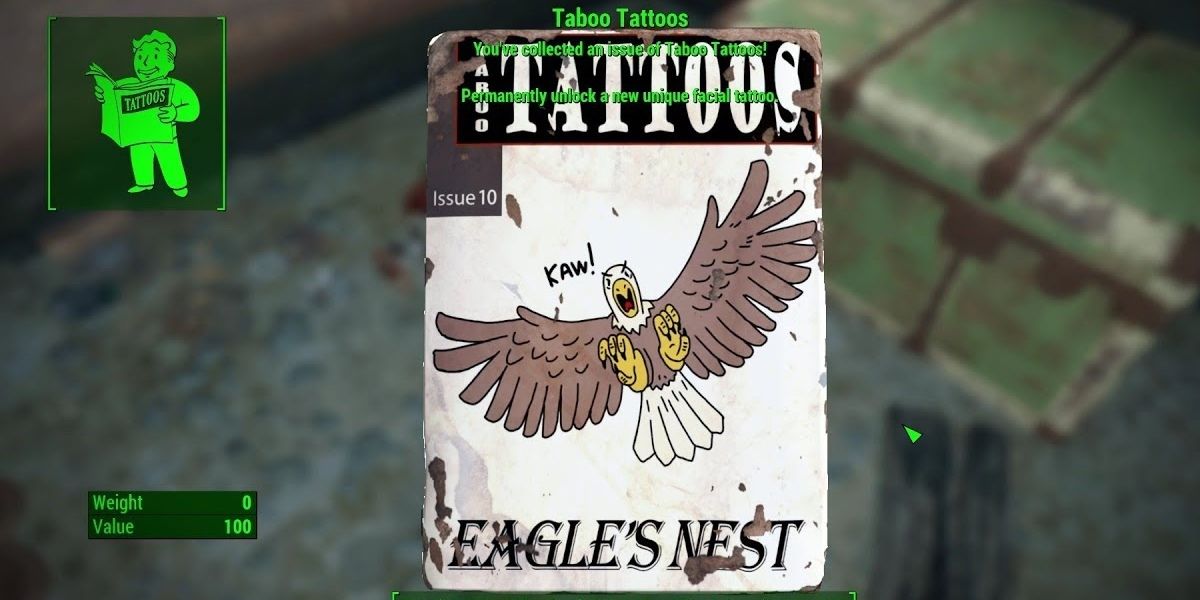 The Eagles Nest issue gives the player the option to have a eagle tattoo on their neck.

This one is found in the Concord Civic Access (which is not marked on the map). They are sewers near the Museum of Freedom in Concord. In fact, they are the very sewers a Deathclaw comes out of during the quest “When Freedom Calls.”

The sewers have three different entrances, but the best one is where the Deathclaw came from. It popped off some metal plates to give you access to a tunnel that goes to the Concord Civic Access. Be prepared to have a couple Mirelurks and Molerats to fight. The magazine is in a small room next to a chest. The room is pretty deep into the sewers, so just pick a wall to follow you should eventually hit the room. 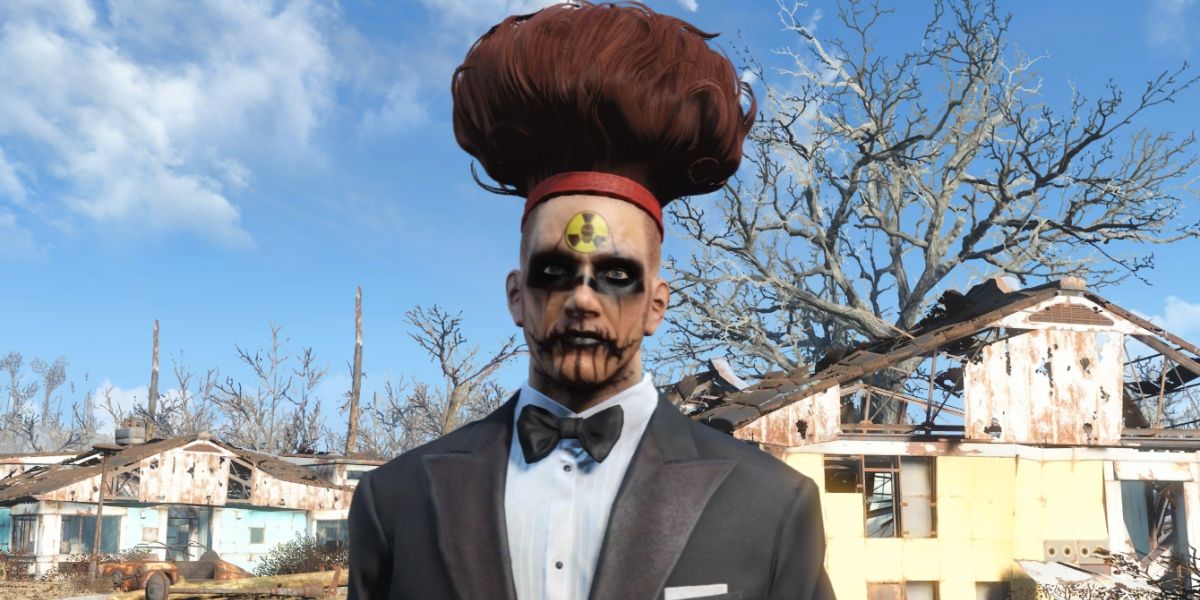 The “Skulls are Hip!!” issue gives the player access to another forehead tattoo. Instead of an anchor though, it  is a radiation symbol with a skull in the center.

This is another easy one to get. Go to the Irish Pride Industries shipyard. Once inside the building, be prepared to fight Mirelurks, Mirelurk hatchlings, and to crush the eggs that can spawn hatclings. You will have to crack open a Novice door lock.

The main shipyard area is past a lockeroom. Go to the docked ship. The ship has a kitchen and dining area. The copy of Taboo Tattoos will be on one of the tables. 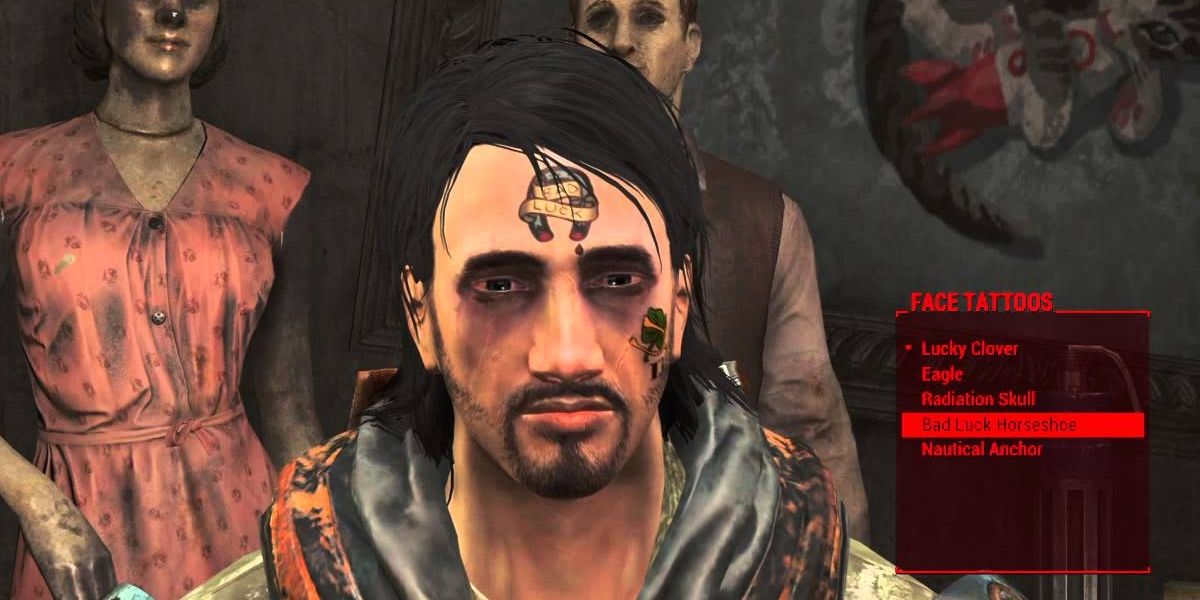 The “Sailor” issue unlocks a horseshoe tattoo with “Bad Luck” written around it.

Hope you like vaults, because this one is in Vault 81. The good news is that there are no hostile enemies. The bad news is that the NPCs are not just going to let you in at first. To get into the vault, you will either need to pass a difficult Speech skill check or bring fusion cores.

Once in the vault, go down the elevator. Go down the ramp to the lower floor and you will find the barber shop. In the shop, the issue is sitting pretty next to a chair.

1 Where To Apply Tattoos 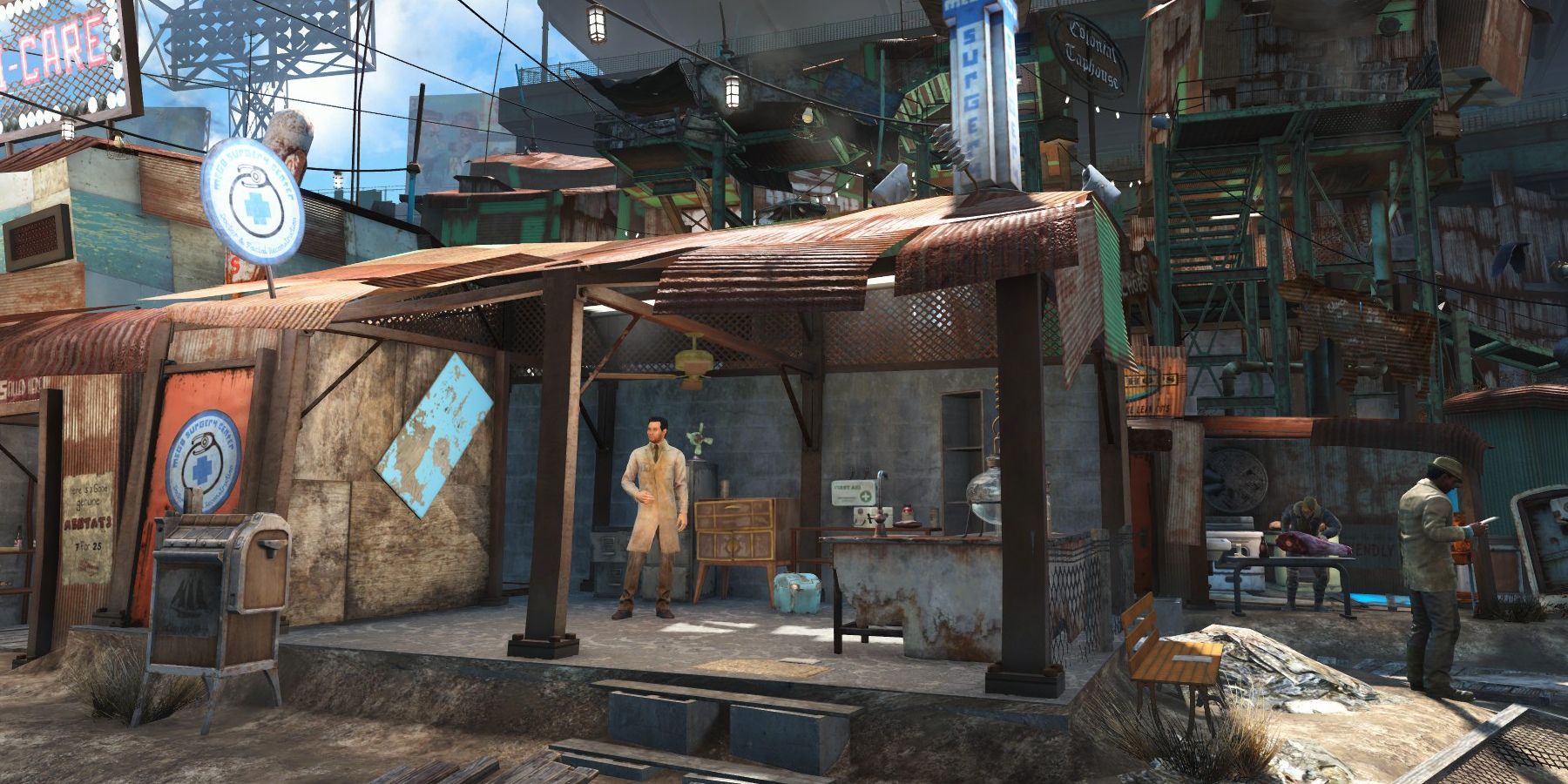 Once you have the magazine issues, it is time to get inked! Just go to Diamond City and head to the Mega Surgery Center. With 100 caps, pay for a facial surgery. However, you do not actually have to change anything. Just go straight to the “Extras” option and you will have access to all the tattoos you have collected.

If you don’t like the tattoos available in the game, there is good news! There are also plenty of tattoo mods out there with a vast array of designs for your character.

Next: Fallout 4: 10 Underrated Energy Weapons You Should Be Using 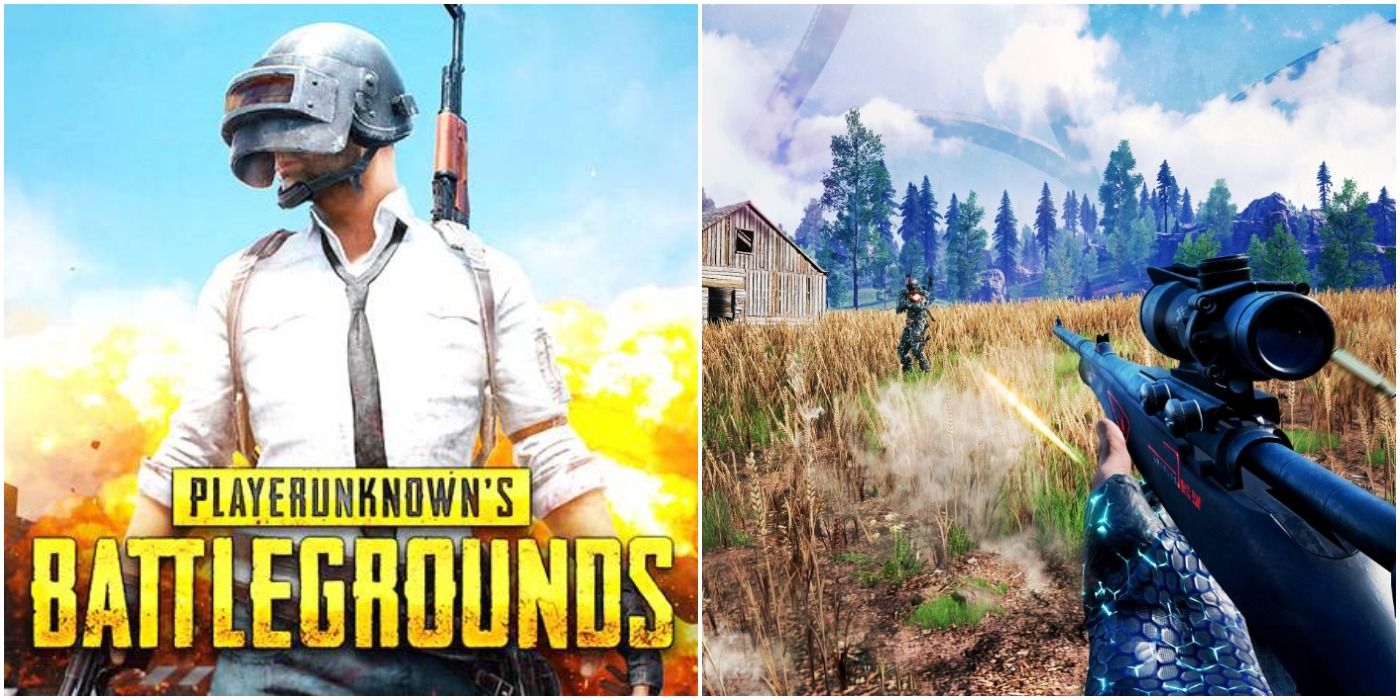 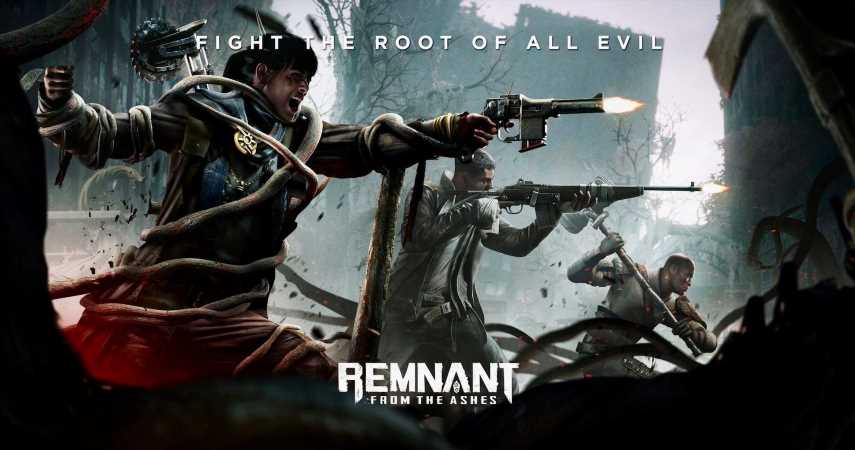