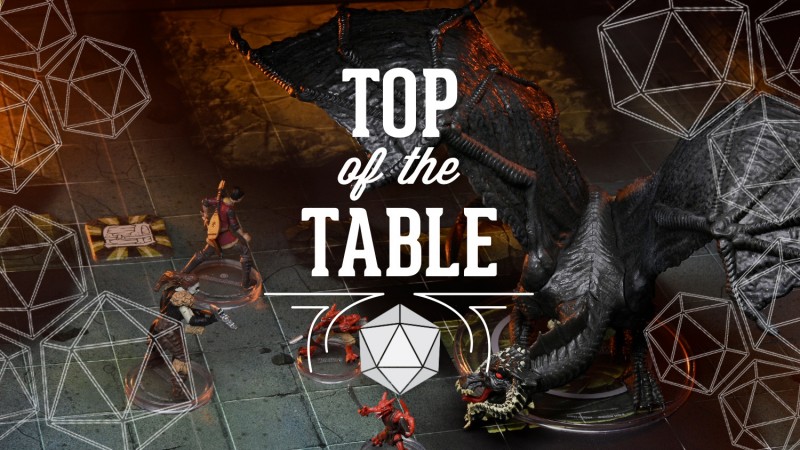 The original Dungeons & Dragons RPG grew out of a connection to miniature wargames, so it’s little surprise that the DNA of tactical tabletop play has remained bound to the long-running franchise ever since. The current edition of D&D supports tremendous flexibility in playing out combat how you like, including through tabletop miniature play, allowing big battles to flow out from ongoing campaign storylines in your weekly sessions. However, perhaps your group is more into combat than interconnected storylines. Or, more likely, you sometimes just want a break from the campaign planning to have a focused evening of combat. If that’s the case, WizKids’ new Dungeons & Dragons: Onslaught game should be on your radar.

In recent weeks, I had the good fortune to look at what Onslaught has in store for players when it releases in early 2023. As a D&D player since childhood, I was eager to see how the game would break down the complexities of D&D battle into a fast-moving tactical game. What I found after a good bit of playtesting was very impressive. Onslaught is a love letter to what makes D&D combat at the table so fun, but streamlined and focused for fast exchanges, balanced one-vs-one competition, and accompanied by minis and other components of stellar quality.

Dungeons & Dragons: Onslaught is a two-person competitive skirmish game. Each player controls members of an adventuring party from a specific faction drawn from the Forgotten Realms fiction. The core launch box includes members of the Harpers and their longtime foes, the Zhentarim. But I also got to check out some of the subsequent faction packs on the way for groups like the Many Arrows orc clan and the dark ranks of the Red Wizards. And while you generally have to build your team only from members of a particular faction, a fun exception allows mercenary groups to join any faction. So, one of the game’s other first expansions is a mini four-pack of Sellswords that can join any team.

After playing with several group combos, one of the things that I most appreciate is the curated balance between each of these asymmetrical factions. Shared roles, like Melee Damage, Healer, or Tactician, are present in each group. But each hero mini has its distinct powers, and I loved seeing how new team layouts fared against an established group. For instance, Mistral the Zhentarim Cleric and Chloe Amasnodel the Harper Bard enter combat as Healers, with abilities that let them revitalize their teammates. However, Mistral’s Sacred Flame ranged attack completely differs from Chloe’s Vicious Mockery ranged power. And since players select their team from a broader faction, there’s no assurance that either will show up in the current session.

The faction limitation helps ensure you almost always field a strong, capable group with multiple roles covered. But there are plentiful team-crafting opportunities even with the core sets, which will only expand if you invest in a particular faction’s inevitable expansions.

The other thing I love so far about Onslaught is its focus on scenario-based play and included monster minis that throw a wrench in any carefully laid strategies for taking out your enemies. Unlike many other miniature skirmish games, each session of Onslaught plays out a specific narrative framework. Indeed, you’re battling against the opposing players’ miniatures, but you’re also focused on objectives, defeating NPC monsters, and gathering victory points. In one early scenario, you’re infiltrating a dungeon infested with kobolds and a particularly nasty troll. You can target enemy characters and defeat them all to win. Fail to do so, and the player with the most victory points after eight rounds takes the win. So your opponent may be gathering loot, dealing damage to the troll, and holding control points in the dungeon, leading to an easy win if they manage to survive your assault.

Beyond adding a fun narrative context to each game, the scenario play dramatically expands the strategic potential. Likewise, the monsters that appear in each battle are a constant challenge for both players as they move and attack (using simple rules governed by the scenario) your heroes. That means you must deliberately balance attack, defense, recovery, and objective goals every time you activate a mini.

Movement and attacks leverage longtime D&D vernacular and concepts but simplify the flow of how those elements play out. On a turn, characters can take a standard, move, and bonus action, as well as multiple free actions, and everything on your character card has an easy-to-interpret icon to tell you which it will take. Healing Word is a bonus action. A swing of your barbarian’s great axe is a standard action. Some powers might even take a Standard and Move action together, like your Monk’s Stun attack.

Most powers involve rolling two 20-sided dice and taking the better of the two rolls. Does the defending character have cover? Roll just one die. Add up some modifiers, and if you meet or exceed the target’s AC, your action has a static damage amount or effect that’s dealt. The tactical complexity comes through the intelligent use of the terrain for cover and the hindering of enemy movement, but also through the application of an array of applied conditions (represented by tokens) that can affect an enemy’s capabilities, like Dazed, Slowed, or Rooted.

Instead of any bookkeeping or writing on character sheets the way you might in a real D&D game, Onslaught handles character progression, damage, and cooldowns for powers with dials on the character and monster cards. Traits like speed, AC, and hit points appear on one dial. Deploy one of your two signature powers, and you often have to start a cooldown dial before using it again, also on a dial. In addition, any number of successful actions can earn you XP, from defeating foes to using particular abilities in battle, tracked along yet another dial. Gain five XP, and you can choose one of two level-up cards unique to your character. So, if you level up Rokpyratrix the Clanless Sorcerer, you can either gain Draconic Resilience for extra AC or Elemental Affinity to deal extra damage when using Arcane abilities.

Battles play out on preset terrain setups dictated by the scenario. These large rectangular battlefields allow for enjoyable navigation thanks to smart layouts, with reference maps in the rulebook that show things like blocking and hindering terrain. The double-sided dungeon board included with the core set has two excellent setups for exciting battles. However, the current limit of those two maps does feel like it holds the core game back a bit; even more than the expansion of character options, I’ll be eager to see new battlefields come into regular play as expansions roll out.

How does all this play out on the table? Perhaps it’s my longtime familiarity with D&D terminology, but the first thing I noticed was how fast I could drop into a comfortable flow of play and immediately settle into the joy of tactical considerations. That’s in contrast to some other tactical minis games I’ve tried that take multiple sessions before I even grasp the fundamentals. Beyond that, I love the multitude of characters and factions on offer and experimenting with each. I also enjoy the regular micro-decisions between engaging my opponent, completing objectives, and taking out monstrous foes. Battles remind me of some of my favorite encounters in D&D games over the years, with tense showdowns and outcomes that often hinge on some critical dice rolls in the final minutes of combat. Sure, I might have less invested in the story and characters in this case, but the conflicts themselves are great fun.

It’s also worth noting that as I played, WizKids’ longtime expertise in pre-painted minis and terrain systems was in full evidence. The minis have lovely, evocative poses and detailed paintwork, especially on some of the bigger monster minis, like the towering Ettin or the Young Black Dragon that comes with the core set. Card art is also excellent, using distinct colors and character silhouettes to connect cards and minis easily. The boards are likewise attractive. While the two launch battlefields are somewhat subdued and darker, there are still unambiguous visual identifiers to help show walls and other barriers while still keeping the art as the focus – rather than a mess of icons or hard lines that break immersion.

While I’ve had limited exposure to how it works, I’m excited about another feature being promised for Onslaught; WizKids plans to integrate playability for other D&D miniatures into play, using a combination of card packs and downloadable scenarios that integrate new monsters and heroes into the mix. Over time, the goal is to allow at least some of your collections of Icons of the Realms (pre-painted), Frameworks (deluxe buildable minis), and Nolzur’s Marvelous (WizKid’s unpainted minis) lines into official play, including for use in organized play at Onslaught hobby events. That won’t affect everyone, but if you already have a robust WizKids mini collection, it could mean you already have a meaningful headstart on building your factions.

While WizKids is undoubtedly considering Onslaught as a longtime investment with an active cadence of expansions and growth, I should add that Onslaught’s core launch set is an exceptional standalone game in its own right, based on my time with it. With 21 pre-painted minis in the box, you get a lot of figure variety on the table. And the scenario book includes seven replayable story scenarios, as well as a couple of more generic match types. A full gameplay session lasts between 90 and 120 minutes, so those scenarios should keep most dueling players busy for a long time before you feel compelled to start downloading or buying new content.

With the connected D&D license and WizKids’ expertise in miniatures production and prior tactical games, Onslaught has enormous potential to disrupt the miniatures gaming scene as it takes off in 2023. Based on several hours of experimentation and discovery, I’m happy to report that such a disruption, if it occurs, will be well-deserved. Onslaught is a strong and flexible game system with a lot of life; I can’t wait to see how it grows once players start digging in after release.

If you’re interested in some other great tabletop games to explore, feel free to click on the Top of the Table hub for additional recommendations. If you have a question about Onslaught or any other tabletop adventure you’re hoping to undertake with your family or friends, don’t hesitate to email me with questions, and I’ll be happy to answer what I can.