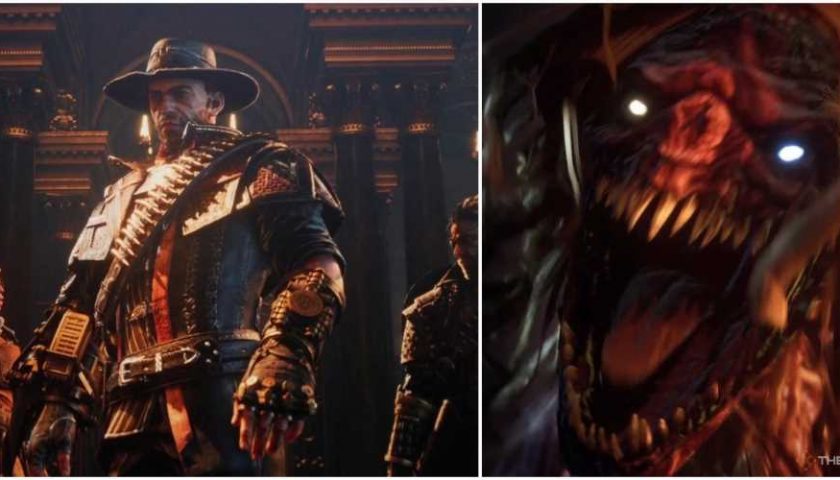 It’s all been leading to this, the final showdown in Evil West between Jessie Rentier and Felicity D’Abano. It’s an incredibly brief level made up of just two rooms, a stage, and a hallway, but the fights to transition between them are a big difficulty spike compared to what you’re used to. Everything but the Kitchen Sink is getting thrown at you in this Chapter, so buckle up for a brawl.

It’s one brutal slog after another and if you don’t have the right Weapon Upgrades or Perks, it’s going to pound you into the dirt over and over again. To help you through this last tough section before the credits roll, here’s a helpful walkthrough of Chapter 16: The Grand Finale in Evil West.

Mission: Get Through To The Stage 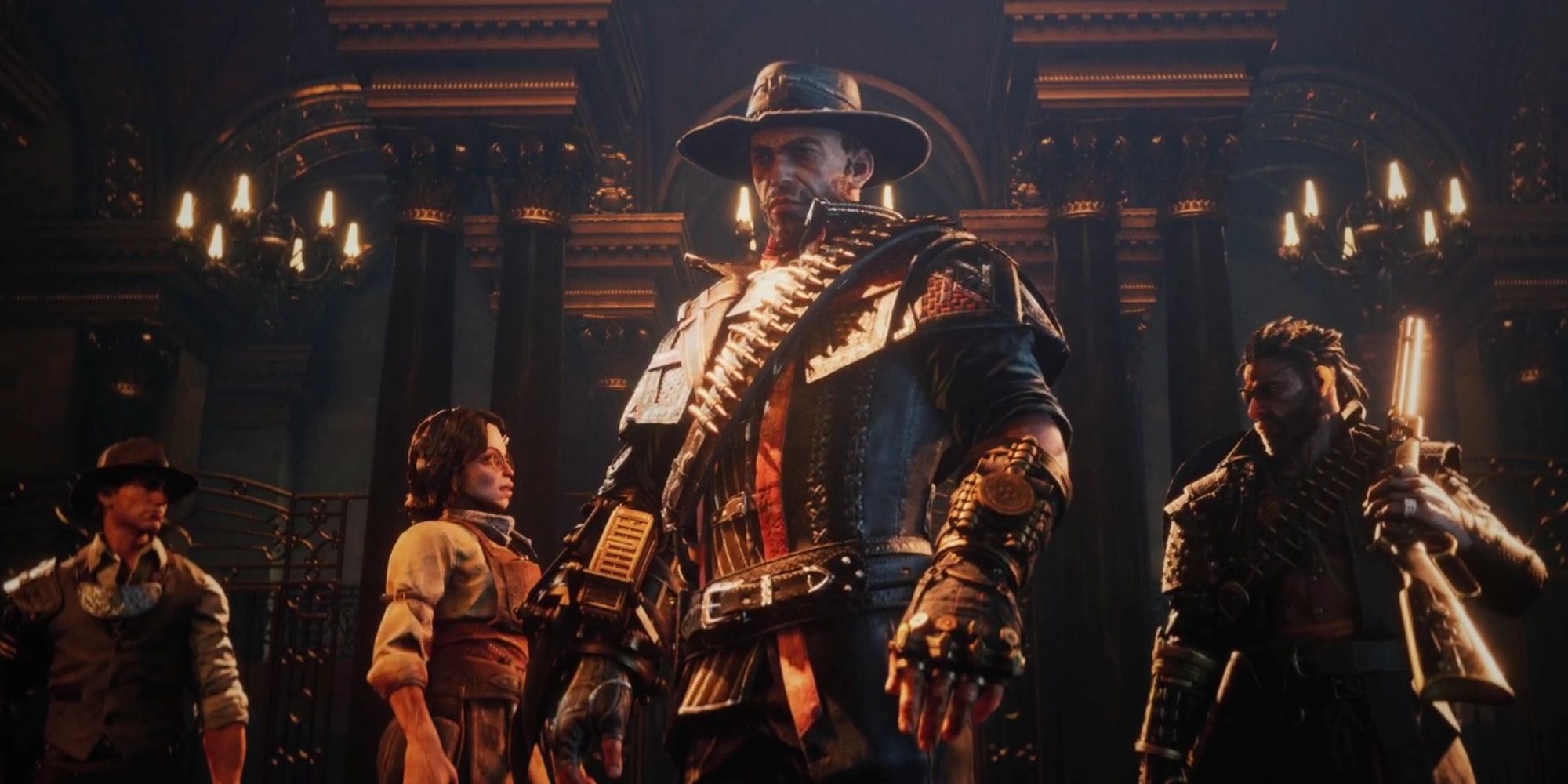 At the end of the last Chapter, there’s a brief transitional cutscene showing how Jessie and what’s left of the Rentier Institute team head to Washington DC via Airship. D’Abanos’ motionless head watches on as our heroes plan their attack. The mission loads and you’re there. The building is burning, everyone is either dead or dying and Vampires are absolutely everywhere as our heroes burst onto the scene, guns blazing.

Evil West doesn’t ease you into this chapter either, because as soon as the cutscene ends, you’ll be dealing with not just one Leecher, but four. There are two on either side of the arena, and swarming up the middle is a very big group of Infected Proteus. Get rid of the Proteus as fast as you can, Explosive Bundles with the Lightning Tornado are perfect for this as they all spawn in one big blob. So get them before they start to spread out. 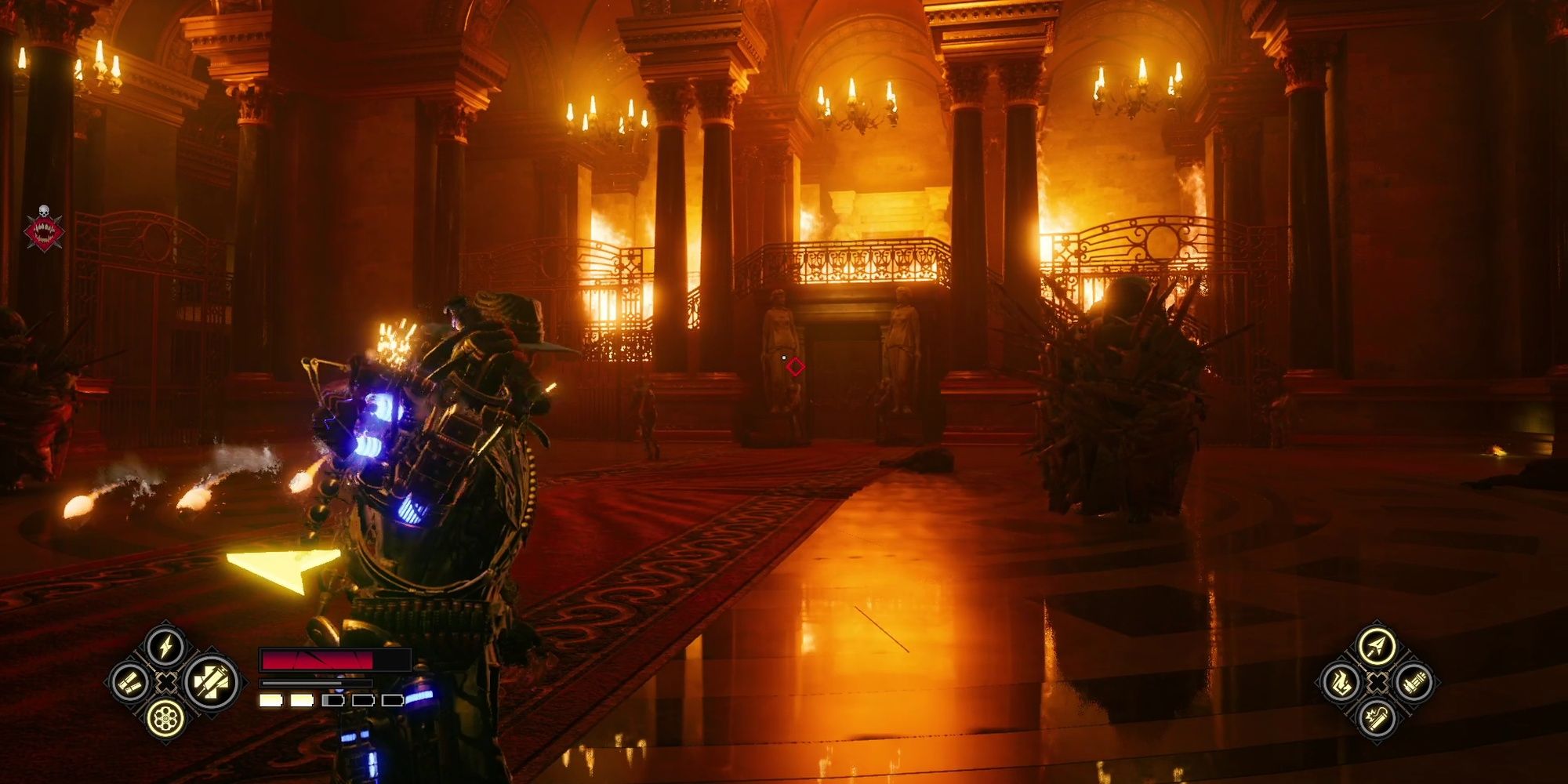 This Chapter throws the biggest waves of monsters at you in the entire game. Make sure you’re adequately equipped to deal with them.

A handful of Infected Vessels will occasionally drop in as this part of the fight wears on. Once the last Leecher dies, three Vampire Highborns will drop in. Focus on them one at a time as trying to spread out the damage will be a waste of time since they can regenerate. A big wave of Boo-Hags will also drop in after the first Vampire Highborn dies, but there won’t be any more after that. If you managed to clear this room, pat yourself on the back.

Before leaving, run around the perimeter of the room. 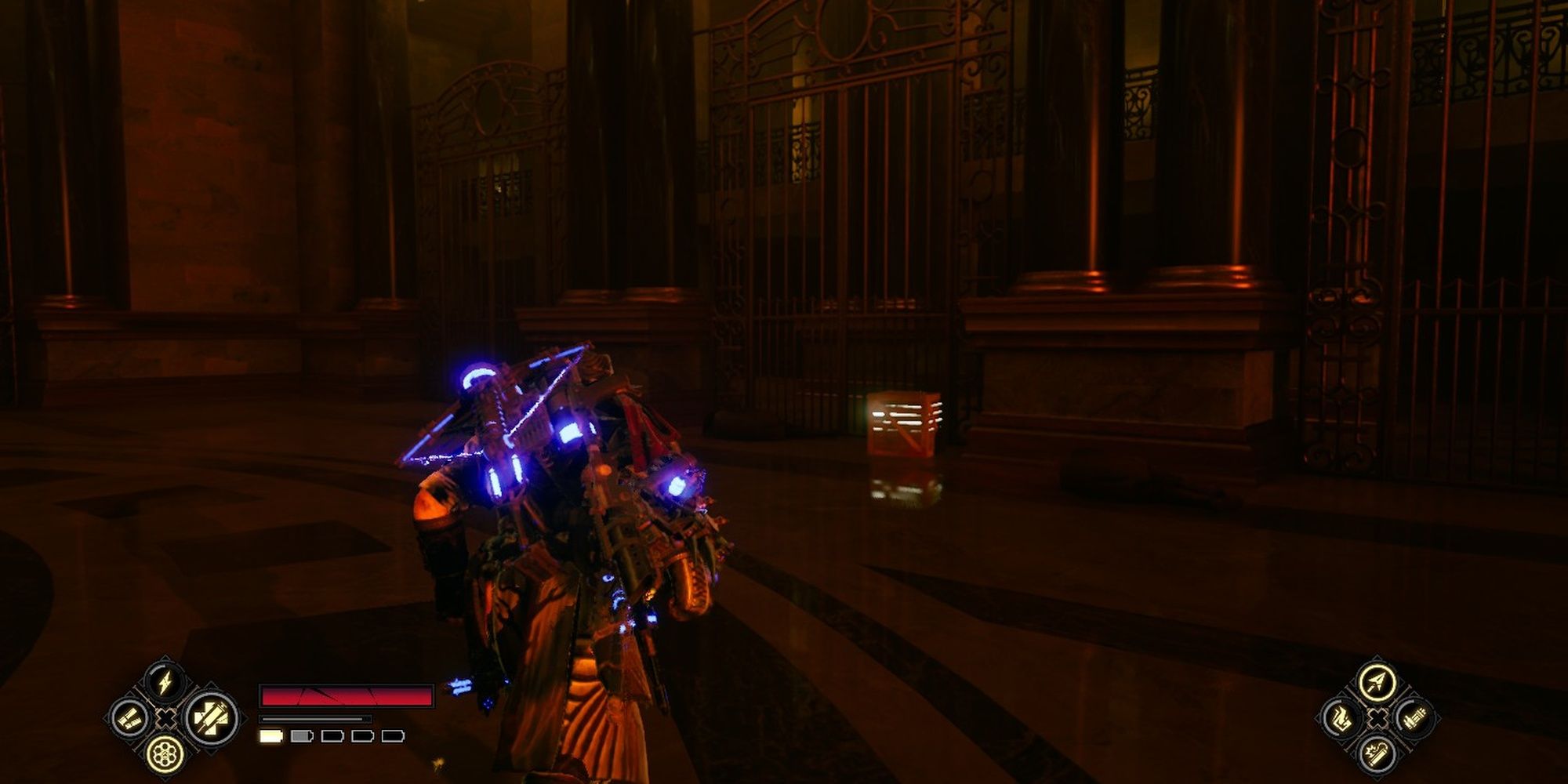 There are two glowing boxes in here, one on the left side and the other on the right. Break them to get their Bucks and then head into the hallway through the breakable door. In this hallway are the last cash collectibles in the game, if you’ve managed to get them all by now, well done. There’s a bag of Bucks across from the Perk Reset Machine, a chest with 450 Bucks, and a glowing box on the ground right after you enter the hallway.

If you’ve been struggling with your build until now, it’s highly recommended you use the Perk Reset Machine. There’s one more fight left until the boss, so use this opportunity wisely.

When you’re ready, hop over the barricade at the end of the hallway to get into the auditorium of the Opera House. The entire place is engulfed in flames, the fancy chandelier is shattered on the ground and there’s a massive horde of Boo-Hags hanging around. This is a really good spot to farm Energy and Health through perks if you’re low or get some skills stocked through combat. The boss fight with Felicity is pretty brutal, so everything that can be gained here is a bonus. 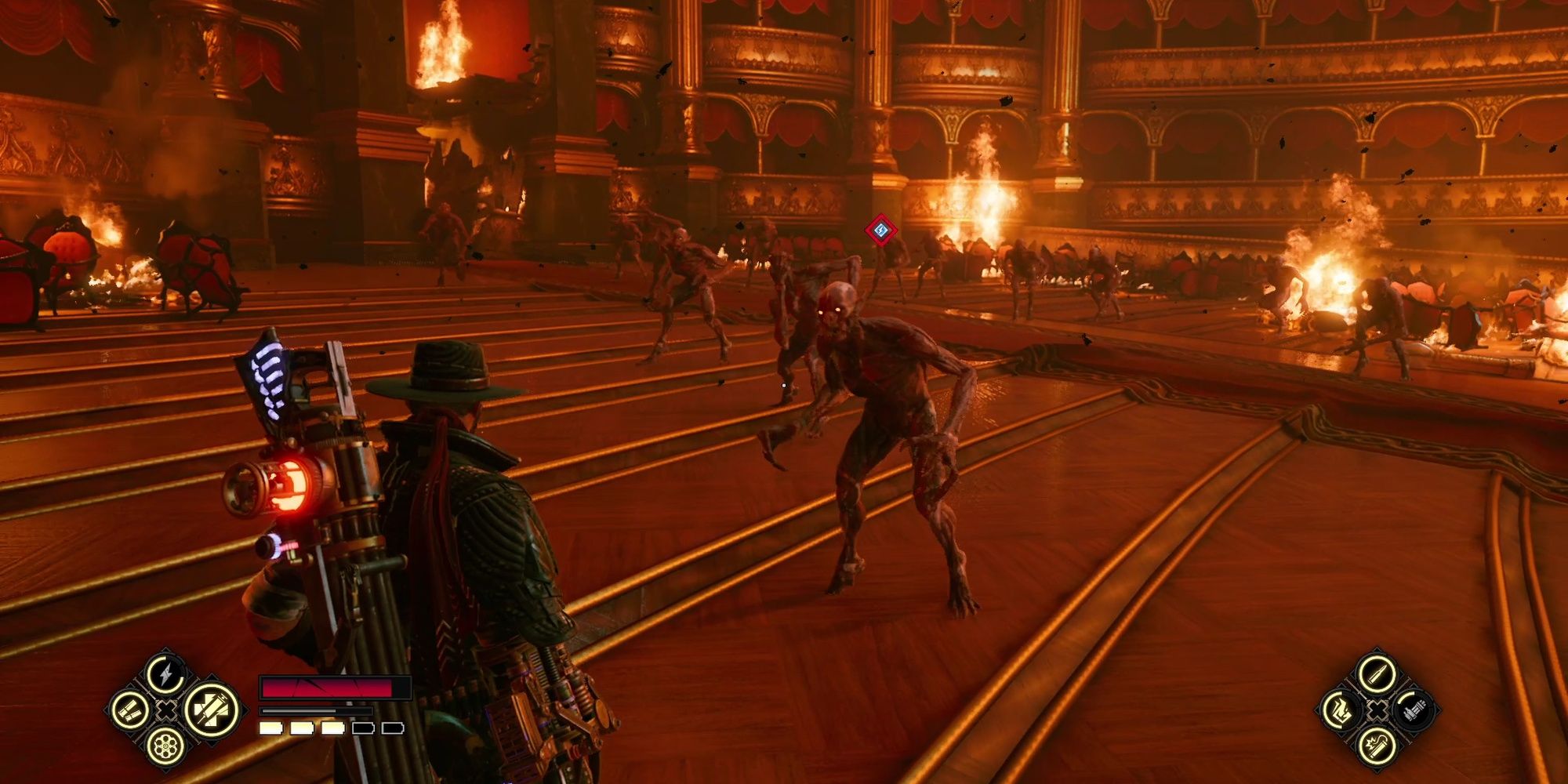 To add to the variety, two Carrion Husks will join in once the herd is sufficiently thinned. More waves of Boo-Hags will continue to arrive, and if you stay near the entrance to this area or the far left of the arena, you won’t aggro the Carrion Husks. So it’s possible to deal with all the Boo-Hags first before the big boys. After the Hags are mulched, some Infected Proteus will drop in to replace them. You can repeat the same trick, or just take it all on at once.

You can break the pathing on the Carrion Husks very easily in this area. Just stand on the left side and keep the Chandelier between you and them. Then just use the Rentier Rifle or X-Bow. They’ll walk in place but won’t defend or dodge.

Once everything is dead, walk over to the Mission Marker icon to start the boss fight with Felicity. A cutscene will play where Jessie walks onto the stage whilst Felicity chews the scenery with her performance. Jessie reacts by saying he’s getting vengeance for his father, whilst Felicity starts to mutate into a big bestial form. Then the final boss fight of Evil West begins. 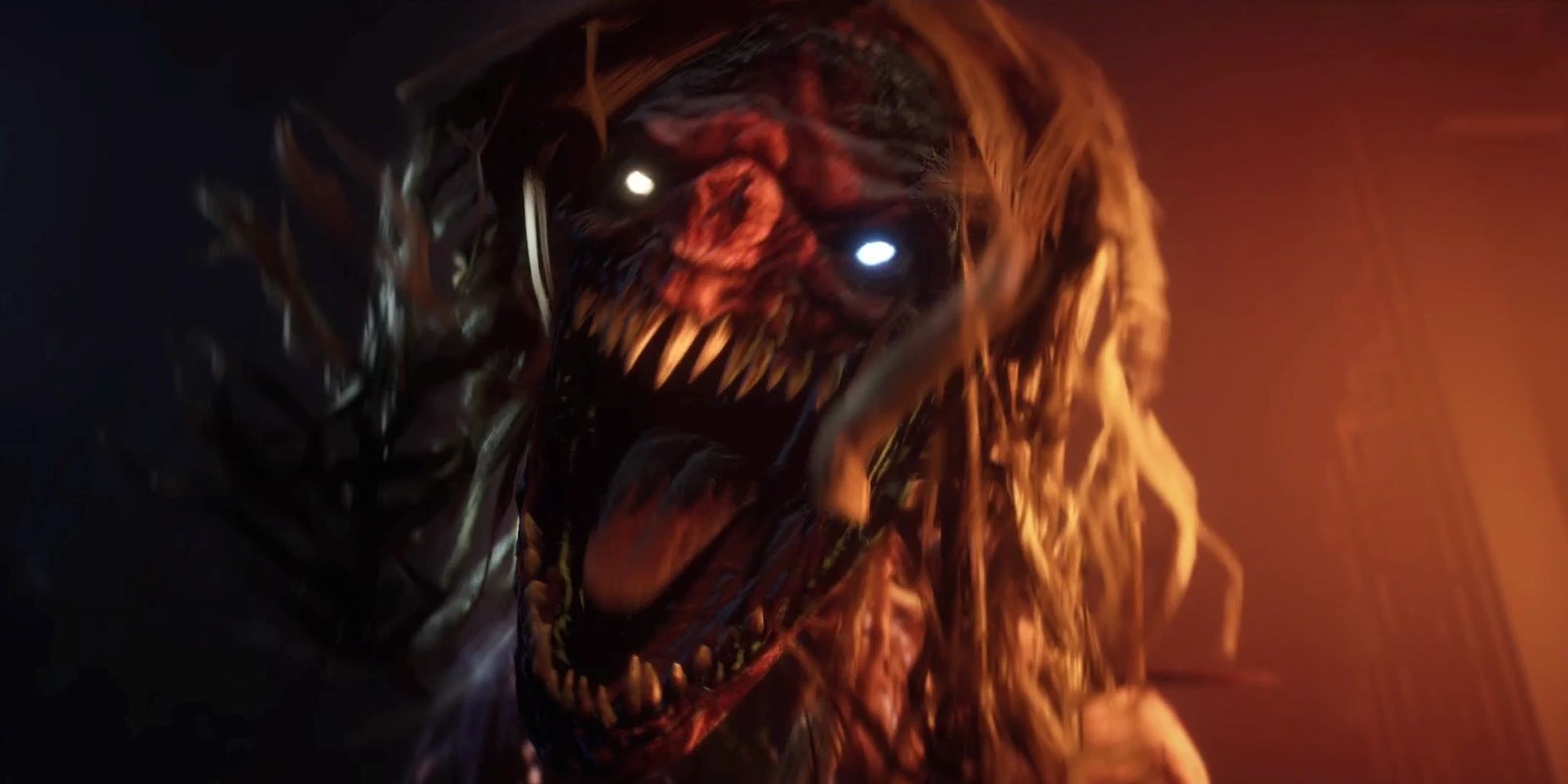 Welcome to one of the trickiest fights in the game. Felicity is the last of the game's four unique boss encounters and like the last two, has multiple phases. To be blunt, this fight is going to be very frustrating if you don’t have the dodge upgrade, Cocoon for the invincibility, and a projectile shield. Because without those there are attacks that you’re just not going to be able to avoid. To walk you through this last nightmare, here’s a breakdown guide to Felicity’s boss fight in Evil West. 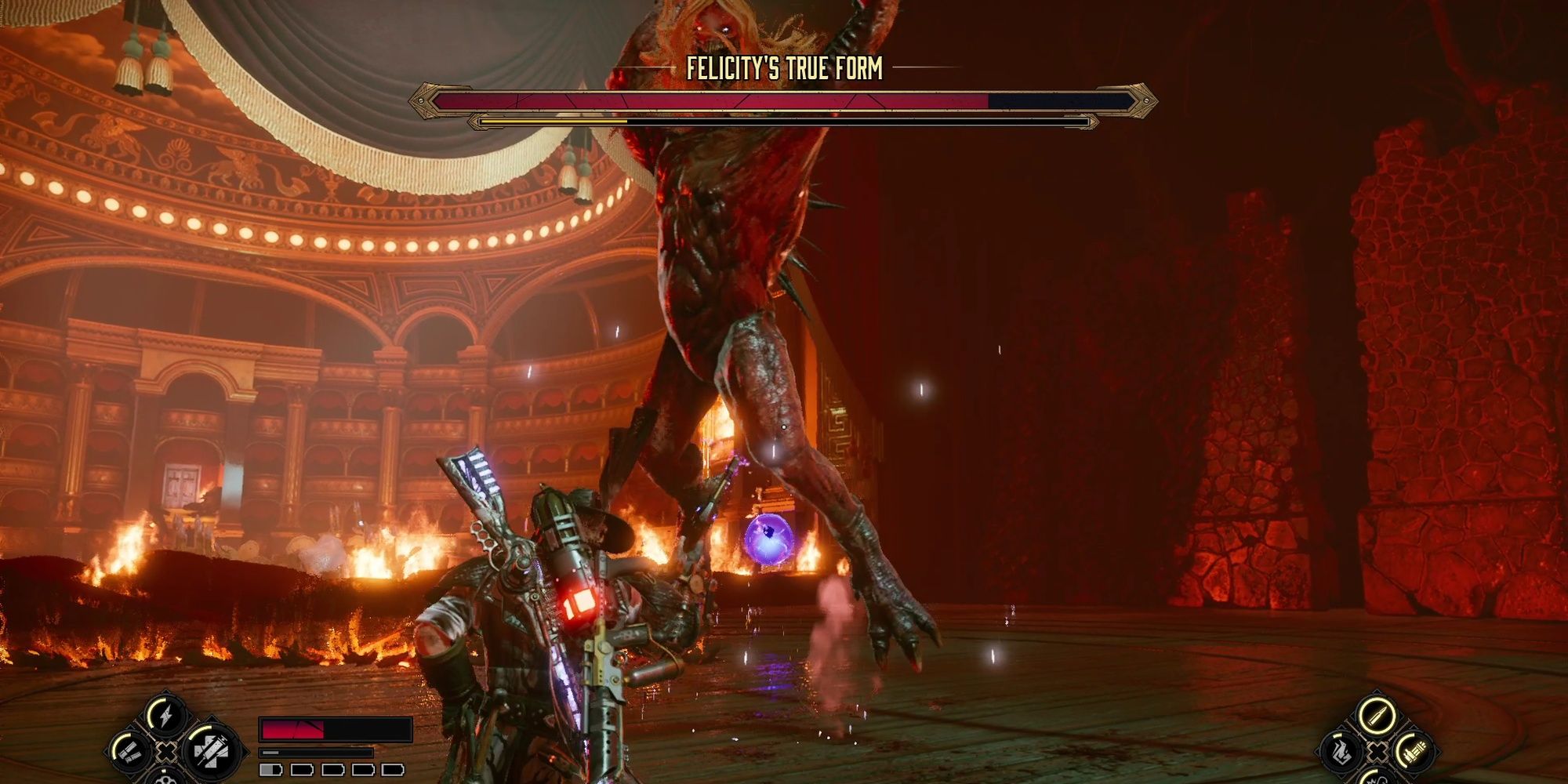 The first phase of this boss fight is where you’re going to be leaning heavily on the dodge button. Felicity is very fast and will switch between a chained dash that leaves a damaging trail in her wake, followed up by a leaping slam, and a melee mode when she stops zipping around. In melee, she has an overhead swing with a slow telegraph beforehand that’s blockable, an unblockable slam that creates a power geyser of energy, a multiple-shot ground wave attack that’s fired out fast, and a very nasty grab attack.

She’ll rapidly switch between all of these moves, and it’s very tricky to predict what’s coming out as there’s not a lot of space between them. For this fight you’ll be punished for straying too far or getting too close, your only real approach is to dodge and keep her at about mid-range. If you can get some stuns in, go in and do melee damage, the second she gets back up just get out of there, don’t get greedy. 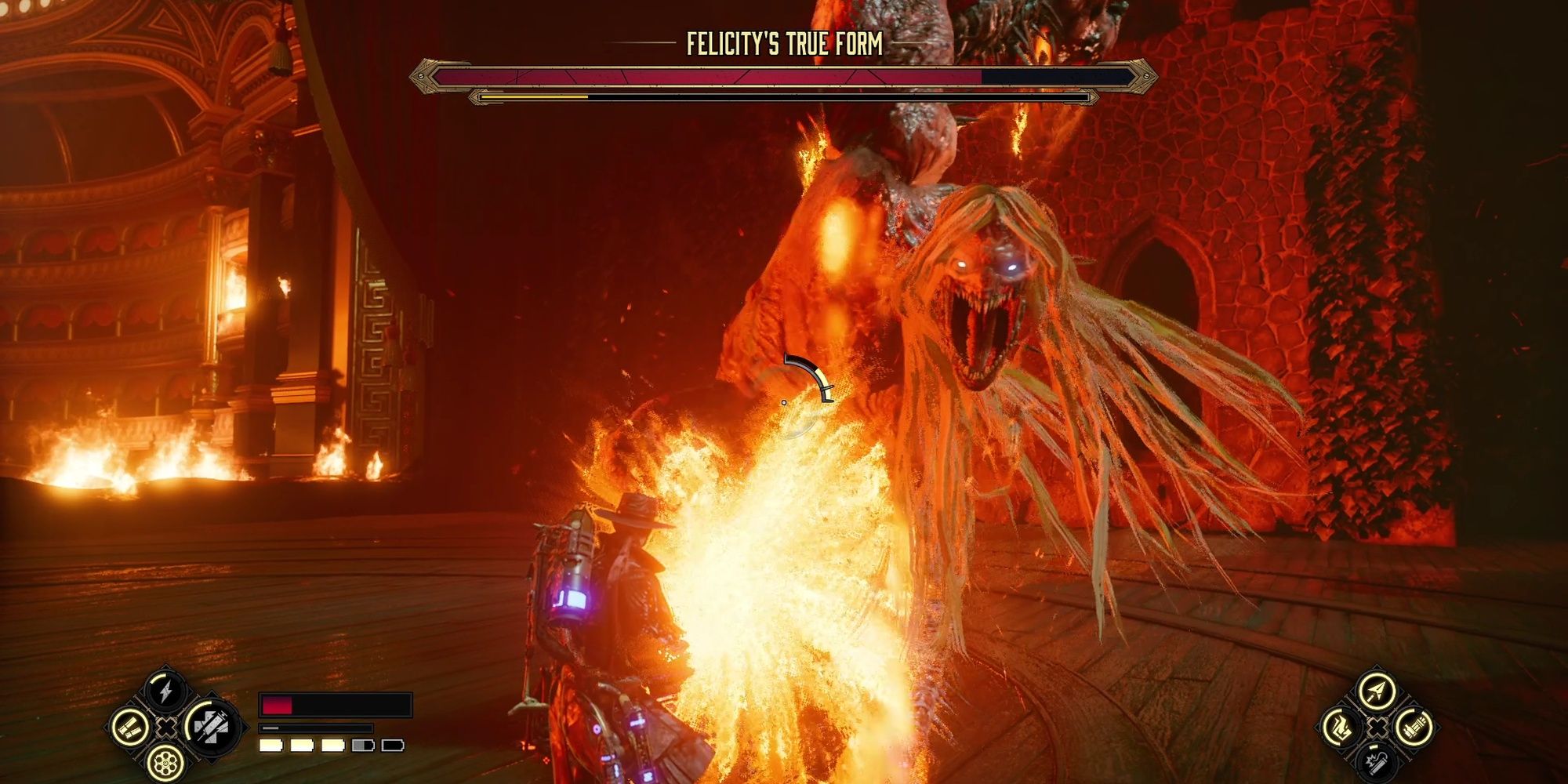 In the second phase, the monster lady gets a lot bigger, spikier, and much more aggressive. This time she’ll do the dash attack again, but it will chain up to four times before Felicity gets tired and has to stop. It always heads to your exact position. So try to stay in the middle of the arena to give yourself plenty of room to dodge out of the way. Melee mode is still there and she’ll use the same moves as before, albeit much slower this time. The real threat is the dash attack.

Felicity will also break out a brand new attack by this point. She’ll jump onto a nearby wall and start clubbing it to make the ceiling cave in. A lot of debris will start falling, so watch the floor and dodge. However, this attack makes her vulnerable, there are flashing weak points to shoot and Felicity will drop to the floor for a few seconds when they’re hit. Ample opportunity to wear her chunky health bar down. 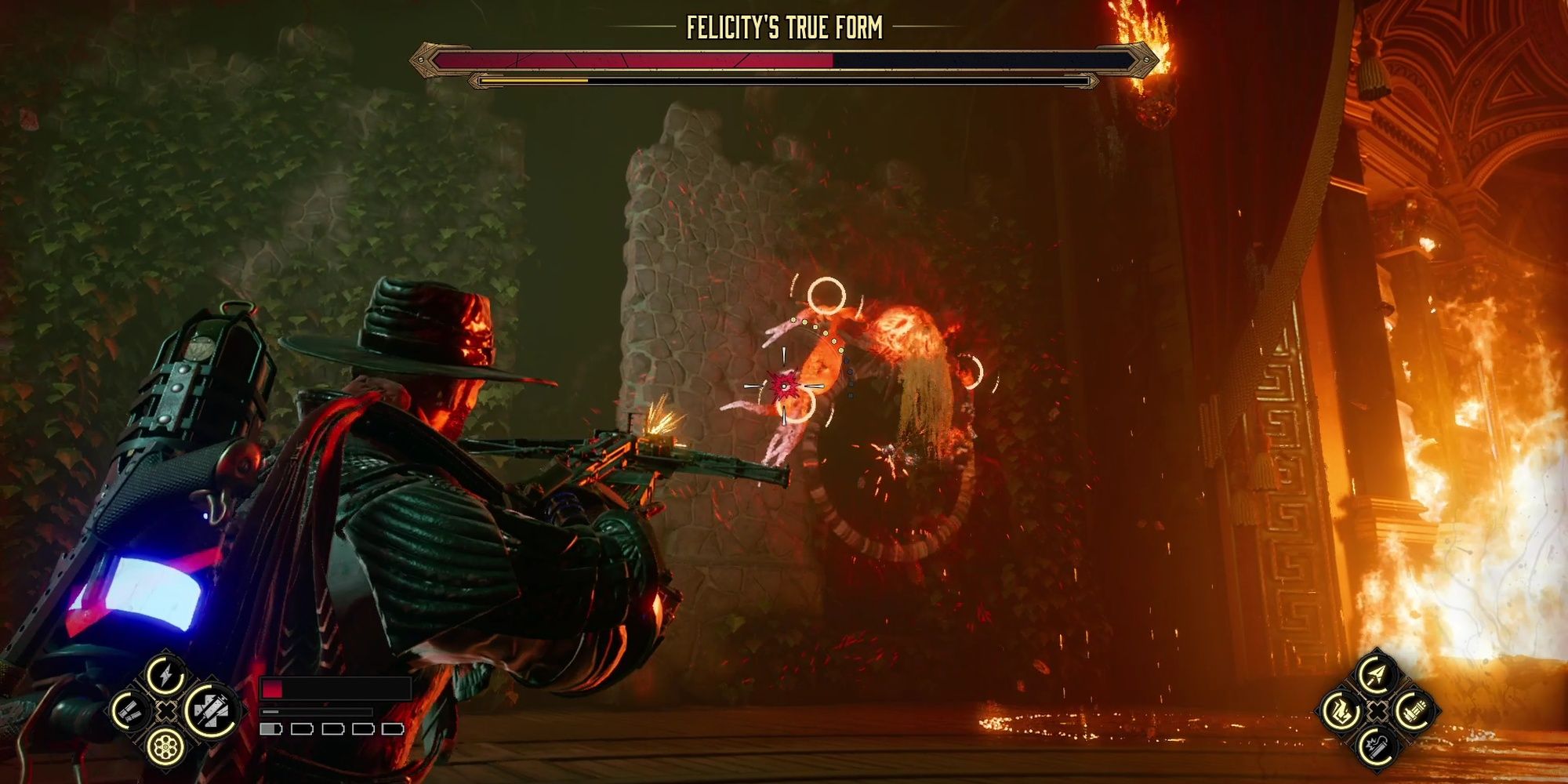 Evil West will checkpoint each phase of the boss fight. So it can be gradually worn down with repeat attempts if you’re having a hard time. 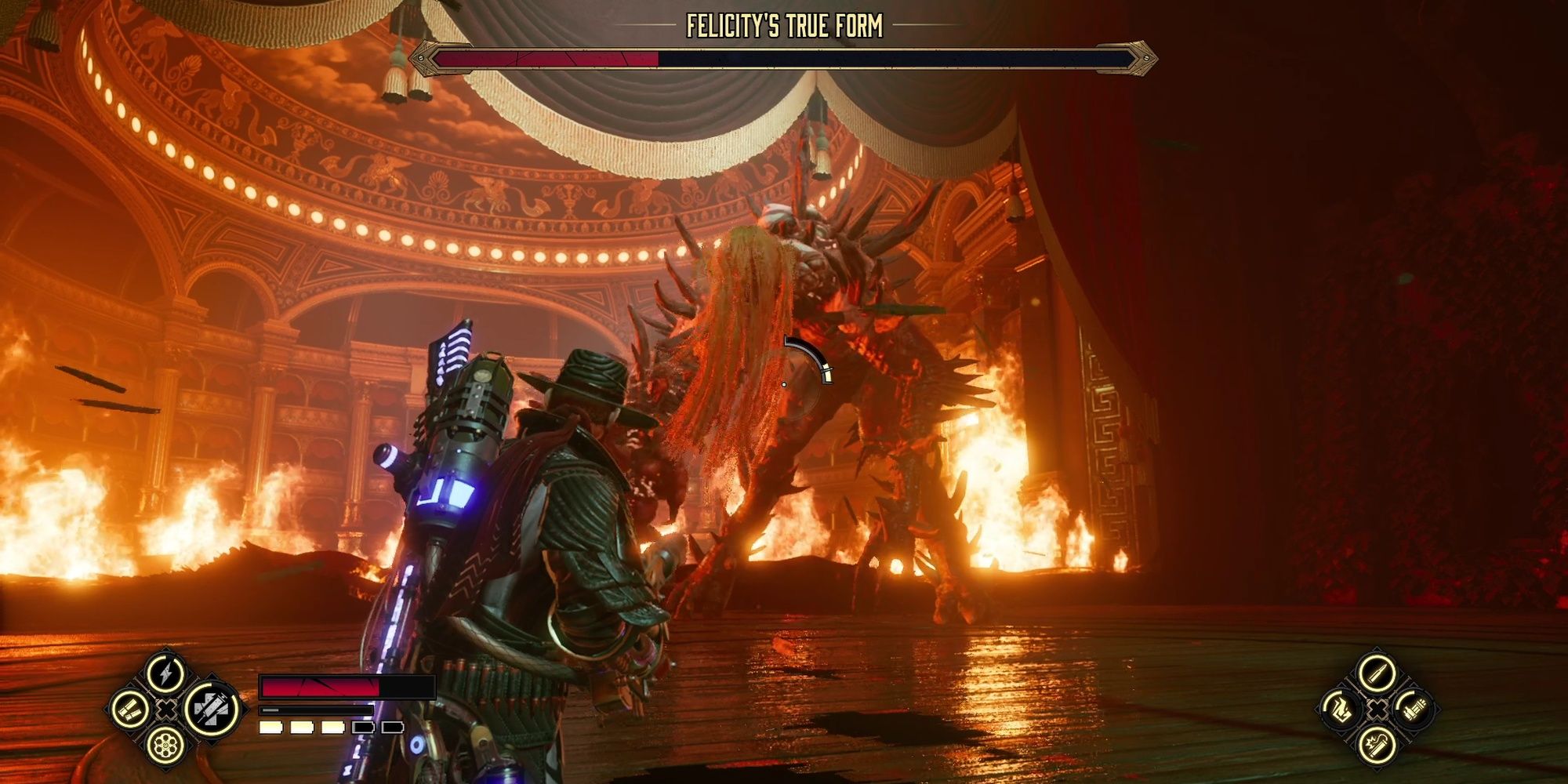 The third phase is where things go from tolerable, to terrible. Felicity gets even bigger and meaner, plus she throws some new attacks out that are brutal. If you take a look at her life bar by this point, and how spongy she’s been to damage so far, you’ll realize that it’s going to be a pretty long phase going forward. From the start, Felicity will throw out a much wider energy wave attack that comes in three’s with the third flashing a weak point so you can interrupt, stun, and then hit her back.

Felicity will also dive into the ceiling before reappearing randomly with a slam that has a very wide area of effect. There’s an arena-wide energy wave that, whilst interruptable, flashes fast and is difficult to dodge. If you have the Cocoon Upgrade for the Rentier Gatling, use it to negate the damage. The other big fancy attack Felicity has is to slam the ground repeatedly causing pieces of stage scenery to fall on the ground. She will then toss exploding rocks at you that can’t be blocked. So you’ll need to use the masonry as cover. However, after a few hits it crumbles, so get ready to roll to the next one. 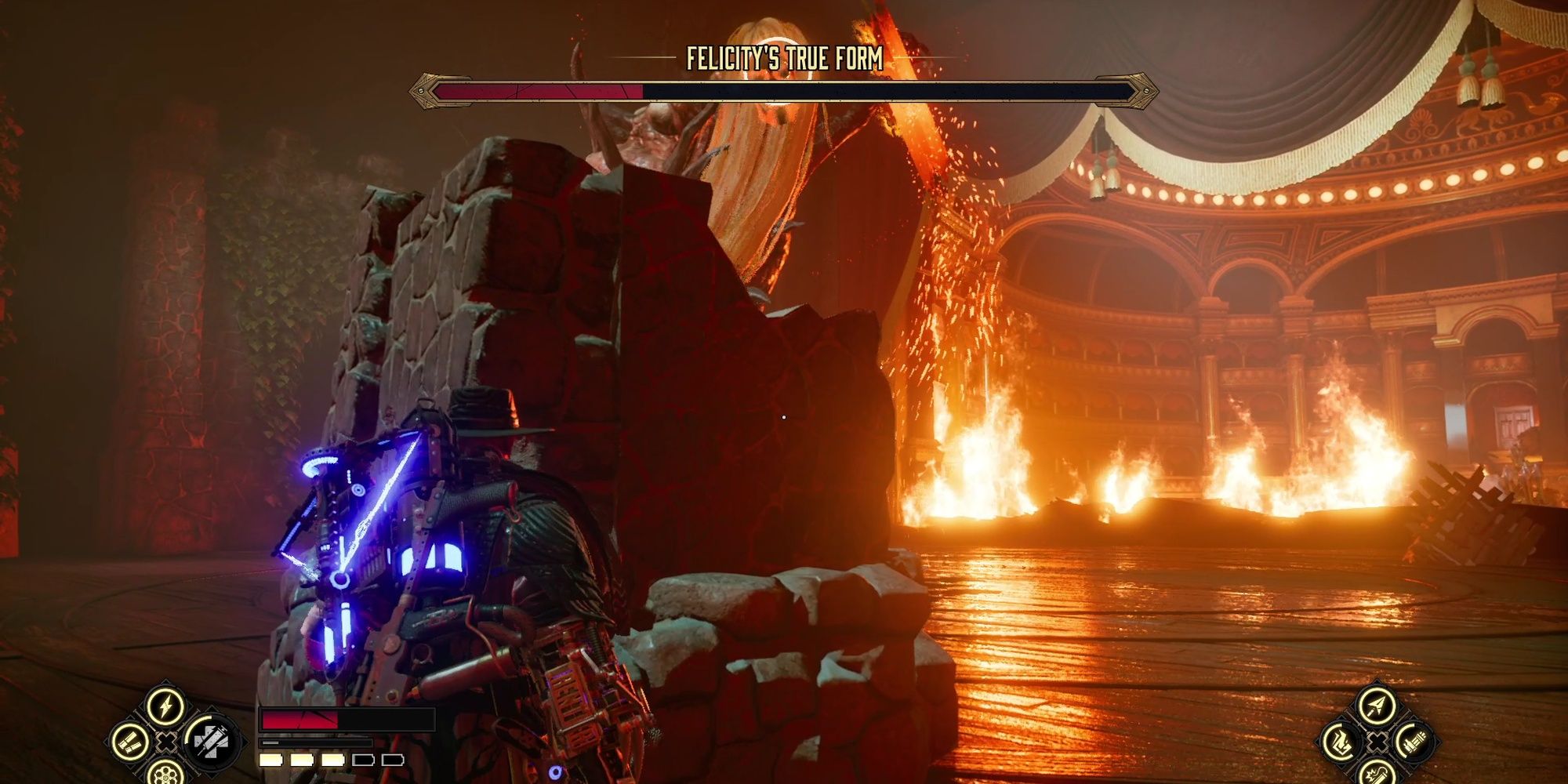 Before Felicity resets from this attack to her other moves, there will be one last flashing weak point hit before she jumps up into the ceiling and then slams back down. This will clear out all the old cover and her attacks cycle onto the next move in the list. Do enough damage, or hit her with the Crippling Rod and Felicity will fall to the floor and flash. Do the old Glory Kill on her to deal out a chunk of damage. It won’t be much, but it’s more than a basic melee move does.

One last move worth mentioning, Felicity will start to shake and shudder on the ground. Get ready with the Cocoon or the Crippling Rod when she does because it means an arena-wide wave attack is about to come out. She’ll be vulnerable afterward, so get over to her quickly before the boss resets. 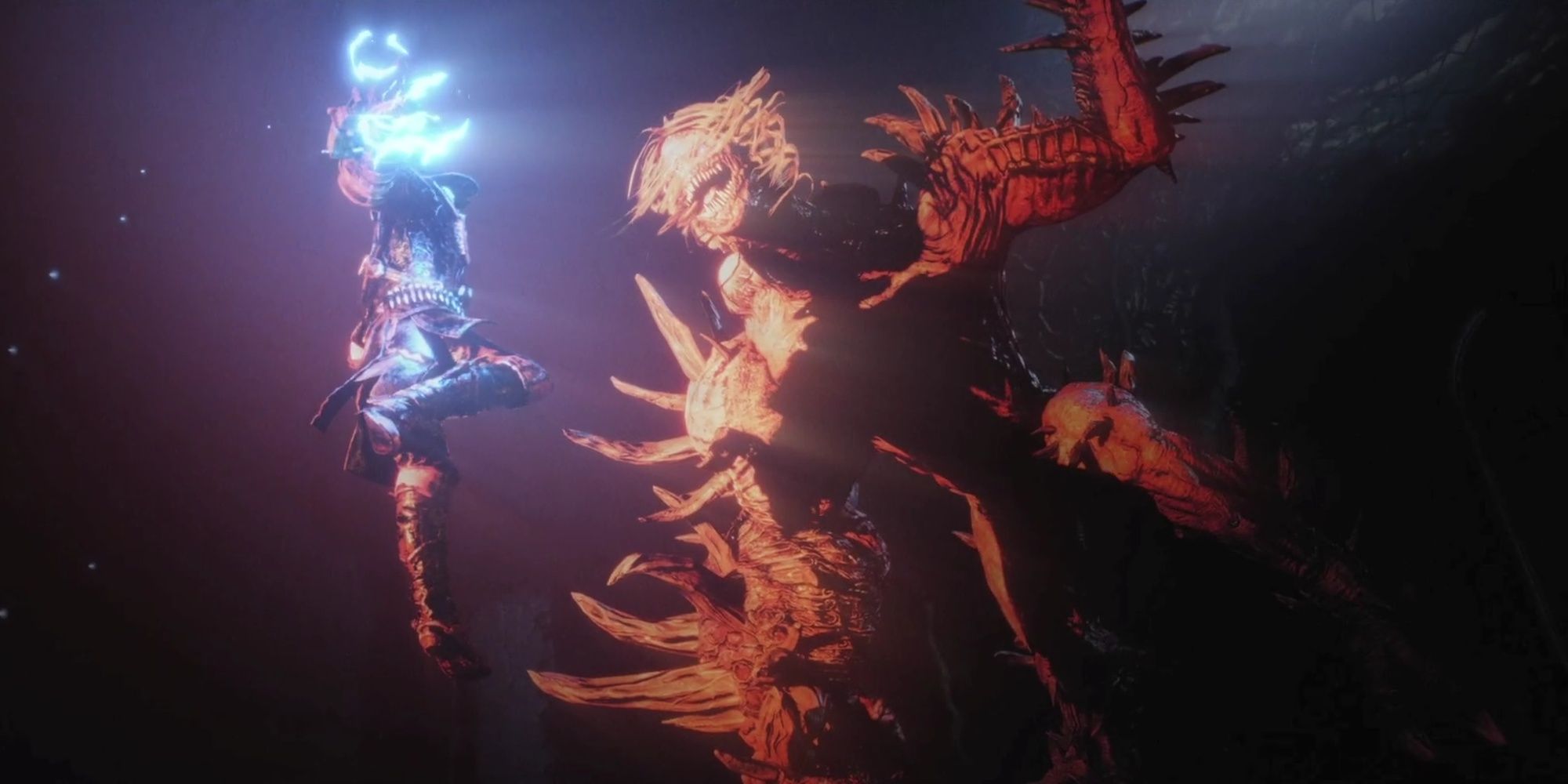 After Felicity is finally worn down a cutscene will trigger and the game will end. In the cinematic ending, Jessie gives Felicity one final big electrified bonk with his Gauntlet and she falls to the ground in flames before exploding. As she detonates a big gust of hot wind flies blasts out from her corpse, extinguishing the burning building, how convenient. With the President secure, Jessie and the gang expose Harrow's slimy under-the-table deals to the President, who in turn tells him he’s going to be investigated for corruption.

Jessie and Emilia are given full control of the Rentier Institute, with the President promising them no limits on funding and whatever else they need to deal with the Vampire menace. Then everyone walks off the stage and the game ends.