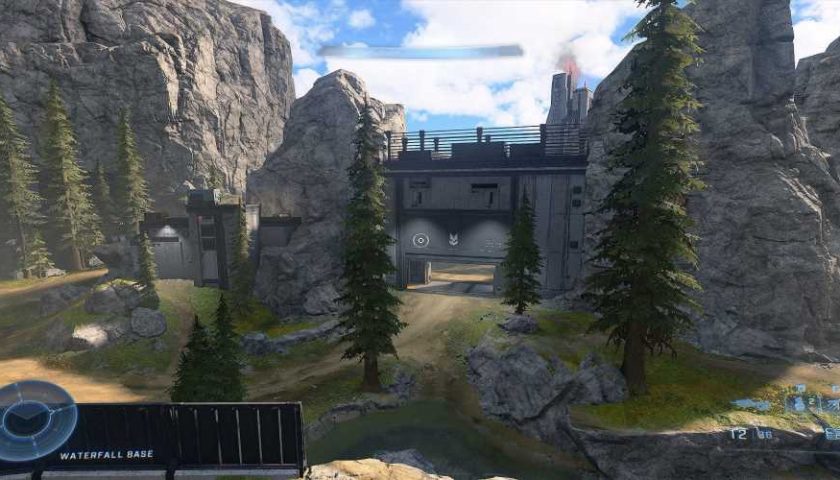 Halo Infinite is here. Its campaign is packed with content and generally well regarded. Hardcore fans will no doubt derive dozens of hours of enjoyment from it in the months and years to come. But the greatest source of longevity for Infinite, like several mainline Halo chapters before it, is multiplayer.

There's lots of fun to be had with Halo's most classic modes. Slayer, Tactical Slayer, Free for All, Fiesta — for many, these eight-player engagements are multiplayer's bread and butter. But it's Big Team Battle, with its sprawling maps and epic 12-versus-12 conflict, that gives folks the richest feeling of being out there at the center of a full-scale war. (Technically a Spartan training program's representation of a full-scale war. But still.)

Big Team Battle has launched with three maps: Deadlock, Fragmentation, and Highpower. Each map is a deep enough experience to warrant its own guide. Read on to learn everything you need to know to gain a strategic edge in Highpower. 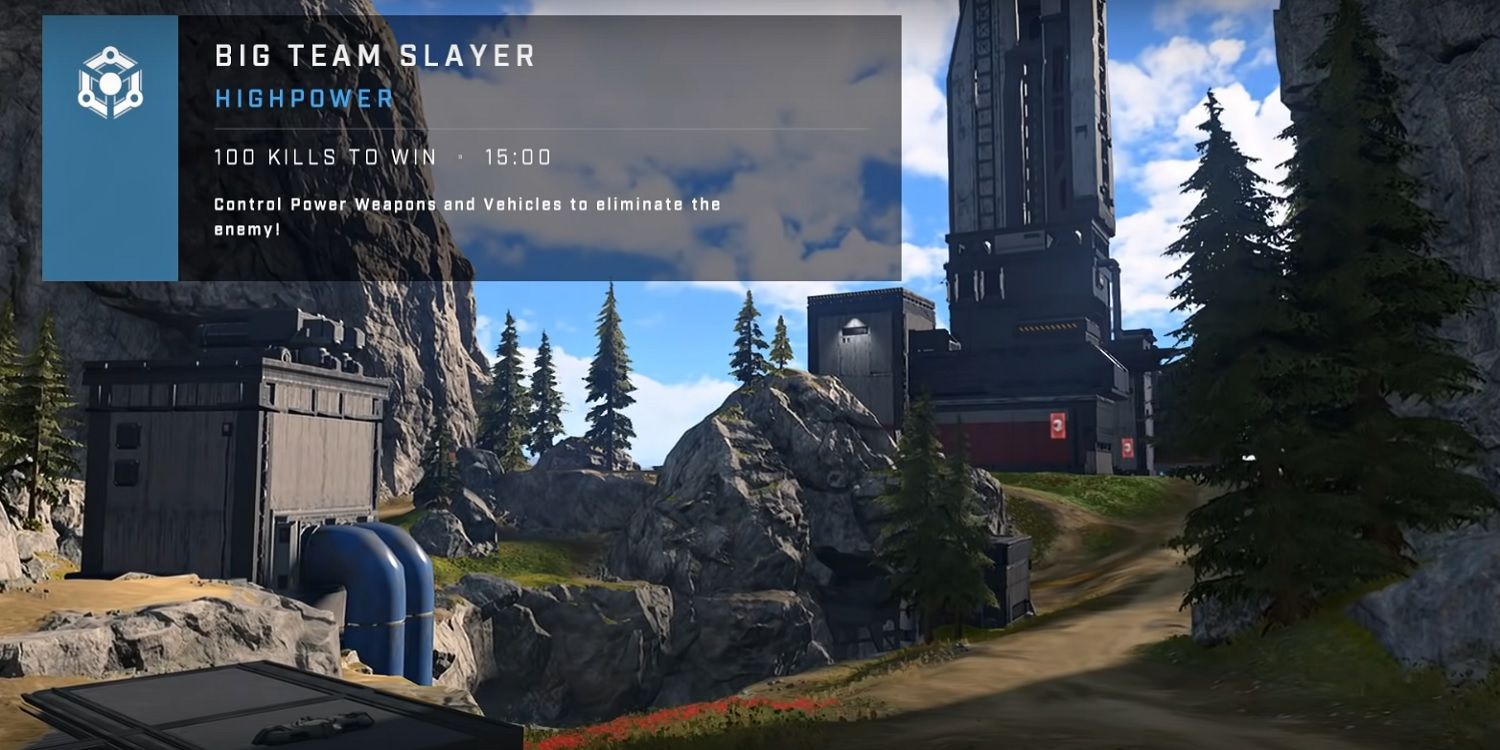 Highpower has a vintage feel — there are two distinct bases on opposite sides of the map, the centermost region is the most likely spot for constant action, and carefully-planned (or spur-of-the-moment) base "invasions" can happen in the blink of an eye. It echoes earlier Halos while taking full advantage of Infinite's bells and whistles for a map that might seem instantly familiar but can surprise players with its appreciable number of handy detours.

There's an overarching sense of straightforwardness to Highpower that prevails in all four of its supported gameplay modes. But a fundamental understanding of good positioning, prime weapon and vehicle spawn locations, and common enemy missteps can make every difference. Your aim doesn't even need to be stellar to make many of the following recommendations work, though needless to say, the steadier the better. 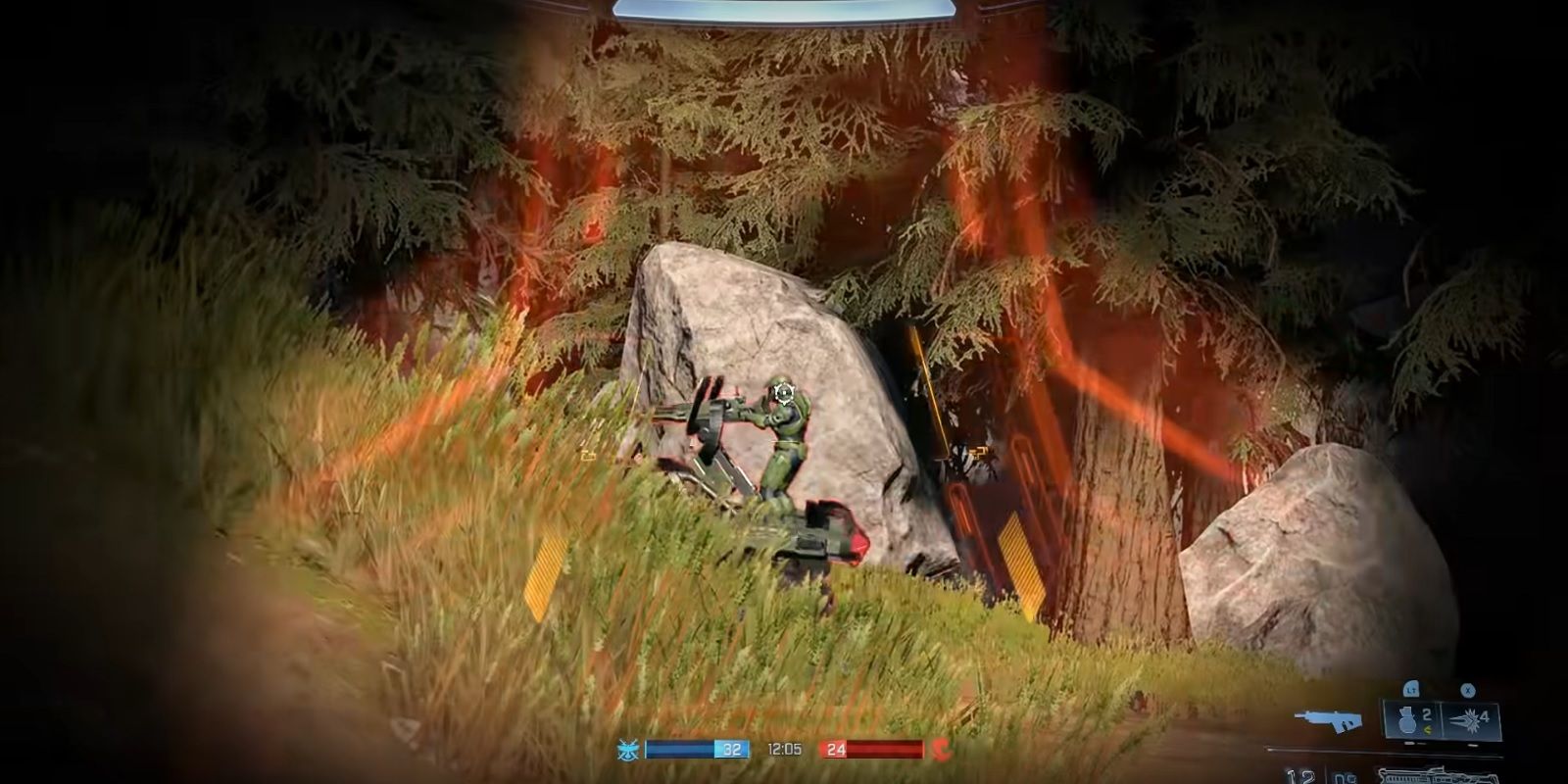 Regardless of game mode, all players will initially spawn quite close to their team's respective base. Generally speaking, this is going to continue throughout every match, but precise respawn coordinates are going to vary dramatically relative to where your enemies are clustered at any given time. Halo Infinite smartly prevents players from popping back up within foes' line-of-sight whenever possible, so if your base is being overrun, don't be surprised if your return to combat occurs some meters wayward.

Both bases have a small landing pad. Wasps — UNSC jet planes, more or less — will spawn here periodically. We'll talk more about which modes these are handiest for in a bit, but broadly speaking, it's a good idea to hop into the cockpit when you see one.

The bases are on either end of a sizable valley; there's a large wall serving as a chief accessway between bases at roughly midway through the map. To be more precise, it's actually a bit closer to one base than the other; but this apparent advantage is made up for via the opposition's beneficial terrain. Controlling the gate may be slightly easier for the closer base, but the more distant side features a large chasm in the earth, splitting travel in two and decreasing the number of ways that invaders can gain a foothold.

Perhaps the single most important thing to note about the Highpower map is that both major sides of the map include passageways, and jutting off from those passageways are alcoves and less visible little paths that are perfect for sneaking. It's not that other players won't think to use these as well so much as the fact that you'll seldom if ever see an entire squad traversing these off-the-beaten-path locales. It's simply impractical. So, if your goal is to break through to the other side with limited resistance, use these. 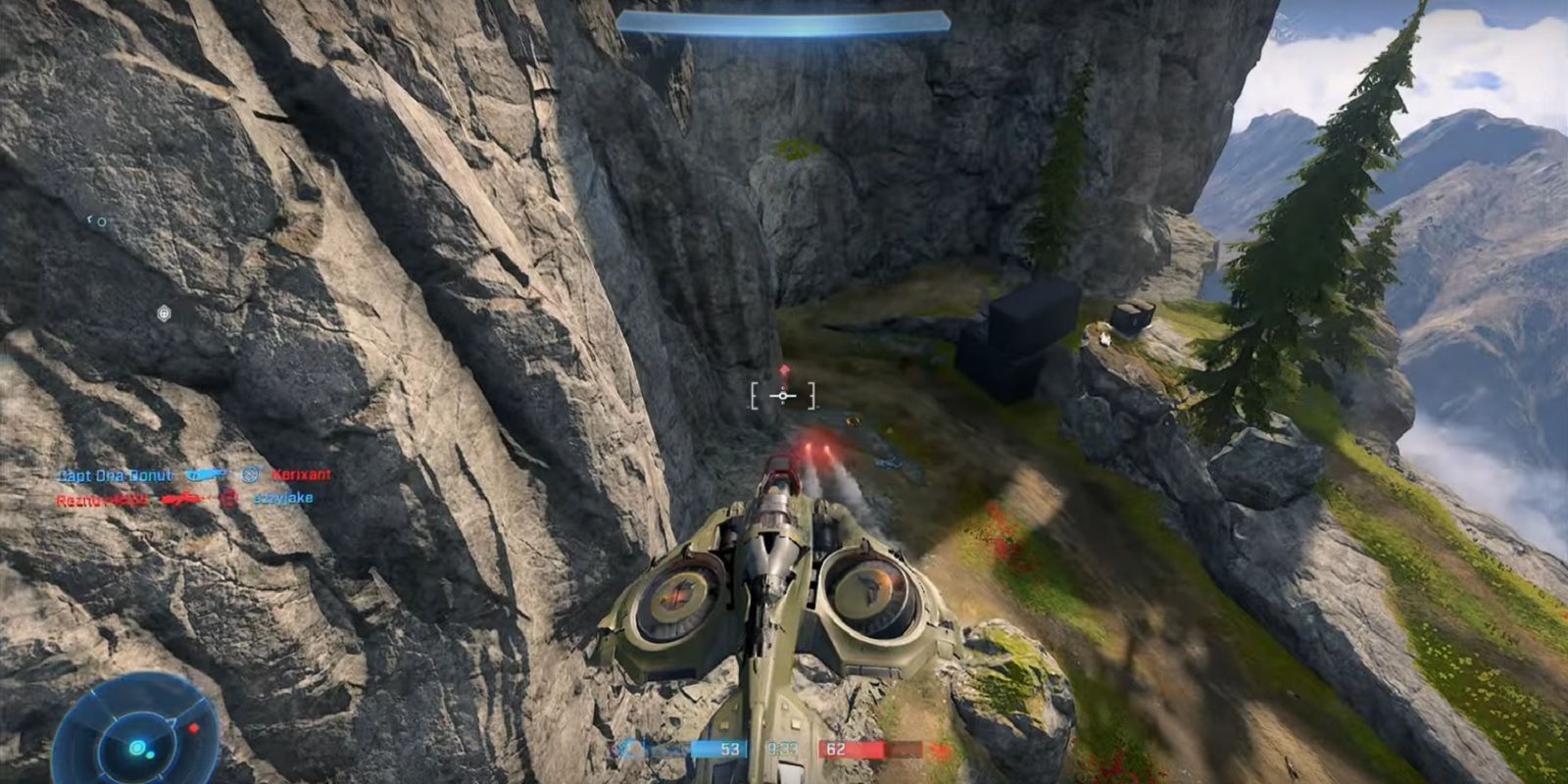 It's one thing to get the gist of a map. It's another to comprehend its viability for each of Big Team Battle's primary modes. Your approach to victory (or, at minimum, a cunning and hard-fought defeat) will differ per scenario.

Halo's most famous, not to mention most direct, battle mode features just as prominently in Big Team Battle. The first 12-person team to achieve 100 kills claims victory. Sometimes, one faction is visibly outmatched. You may see (and sometimes be victim to) some sad rounds of, say, 100-29. But more often than not, things get tight.

On Highpower, there are two main types of Slayer players: those that rush toward the dominant conflict at the center of the map and those who slink their way to and fro. If your preference is for adrenaline-fueled gunplay, hop aboard a Warthog from square one. Make sure you've got a teammate to either drive or fire the armored jeep's turret, depending of course on which role you're fulfilling.

Plowing through enemy lines in this manner can earn your team substantial kills very early on, and the turret spits bullets so devastatingly that unerring accuracy is hardly necessary. A good driver on Highpower will always keep the Warthog moving so their gunner is as safe as possible. Taking down rampaging gunners is critical to turning the tables on a Warthog, so know that all eyes are on you.

For the more tactically-minded gamer, use the alcoves and smaller passageways. There are often some great weapon lockers here, too, and if you can get your gloves on something like a Cinder Shot you can guide your shots with the analog stick or directional pad. In a way, this can turn you into a fast-moving sniper.

In Total Control, three spots on separate regions of the map must be controlled simultaneously in order for a team to score. This transpires at least thrice; further rounds are added until a team secures three points (or the clock runs out).

Highpower's Total Control will always involve the main gate at the center of the map at some point. Furthermore, little nooks and crannies relatively close to the gate are also likely to come into play. This, of course, is to keep players moving forward in a dizzying display of gunfire.

A valuable strategy for many of Highpower's control spots is to ascend to the top of an outcropping visibly overlooking the gate. There are numerous fence segments up there to keep snipers safe as they pick people off target after target. Driving a Warthog or Rocket Hog onto the conveyor platform near one of the bases can grant you some serious sky-high artillery.

Additionally, hanging out on the roof of your base with any long-range rifle can keep fewer enemies from occupying those central spots. Sooner or later, someone's going to take notice and run up to the roof to end you, so keep tabs on your surroundings.

Unlike Fragmentation, another of Halo Infinite's Big Team Battle maps, Highpower keeps factional flags in a singular location per round. The goal is to grab the enemy's flag from behind their base, bringing it all the way to yours. Suffice it to say, you're going to want to stop the enemy from doing the same thing in reverse.

Capture the Flag is one of the modes where the Wasp (and the associated Covenant-built aircraft, the Banshee) are most valuable. Since the Wasps slowly but surely spawn on opposing airstrips, be on the lookout for one at all times. A common misconception about Wasps and Banshees is that they are 100 percent attack-oriented. Put another way, their more obvious usage in the minds of many is to fly across Highpower's expanse, chasing foes carrying your flag and inciting mayhem at their base.

To be sure, this is a valid play. But it also puts you well within the range of legions of missiles from increasingly angry enemy teammates. Unless you're a supremely skilled pilot, sooner or later some of those blows are going to land, and now you're down one Wasp and waiting a long time for another.

A less-known and equally useful — if not more so — plan is to use the Wasp and Banshee defensively. The large cliff-facing backsides of both bases are quite possibly the most overlooked hiding nooks in Highpower, and not for no reason; after all, who looks at a huge wall and thinks of stealth? Or a noisy space jet, for that matter? The truth is, Wasps make very little noise when stationary, and those walls conceal their presence quite nicely. The last thing most players expect to find hiding someplace is a several-ton flying war machine. Rain hellfire down on all those who would so much as look at your flag.

Highpower's blatant tendency to send players sprinting toward the main gate for high-octane shooting plays a pivotal role in Stockpile. The energy cells necessary to bring a team's base to full charge tend to drop close to the gate; even when they're elsewhere, it's just down the bend on one of the dirt roads.

More than any other mode, Stockpile relies on Highpower's vehicular focus. When you see a Warthog or Razorback with multiple enemies riding in it, make that your prime target. Odds are, the driver's goal is to drop off their riders so they can grab a power cell and then give them a lift back to base. (All is fair in love and Stockpile, so feel free to use this tactic yourself.)

There's a trick to those power cells, by the way. Throwing them like footballs periodically may sound like a dreadful idea. In some cases, it is a dreadful idea. But whenever you're holding a cell, you can't do just about anything. You can't sprint and you most certainly can't protect yourself. Tossing a cell forth as far as possible in the proper direction allows a player to temporarily defend themselves against inevitable altercations.

Our prior nods to the Wasp and Banshee's appeal still hold true with Stockpile. In this case, do go on the offensive. You might be amazed just how many kills can get racked up simply by floating near the enemy's base shooting every one of their cell carriers before they can deliver their load to the terminal. This will undoubtedly make you very unpopular among your rivals, but all that time they're spending firing upon you is keeping them from messing with the rest of your squad. Which makes you a very nice person indeed. Despite all the hellraising and wholesale aerial slaughter.