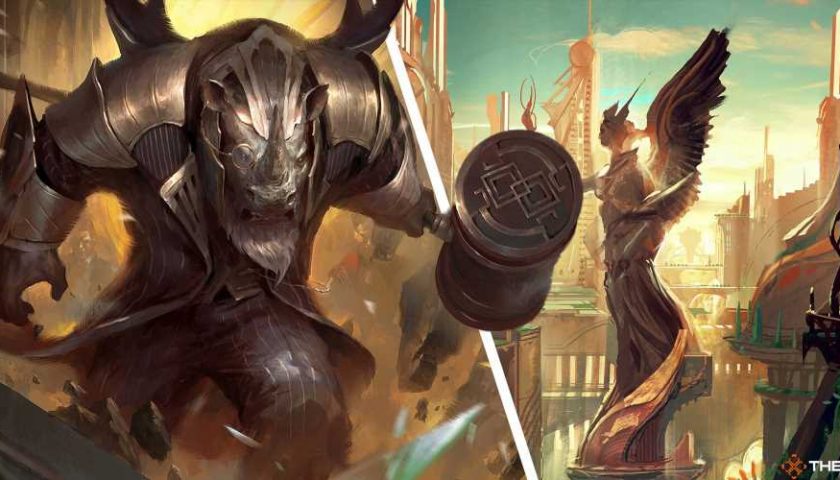 Magic The Gathering has fully lifted the lid on its upcoming art deco Mafia-inspired set, Streets of New Capenna. We've met the five crime families vying for control of the city, the mechanics we'll be playing with, and the art treatments we can pull in booster packs.

It was confirmed that there will be a heavy counters subtheme to New Capenna, to accompany its three-colour-matters design. We were also introduced to the Commanders coming in Commander 2022, this year's bumper crop of Commander preconstructed decks based on Streets of New Capenna. Here is everything we learned from the debut stream. 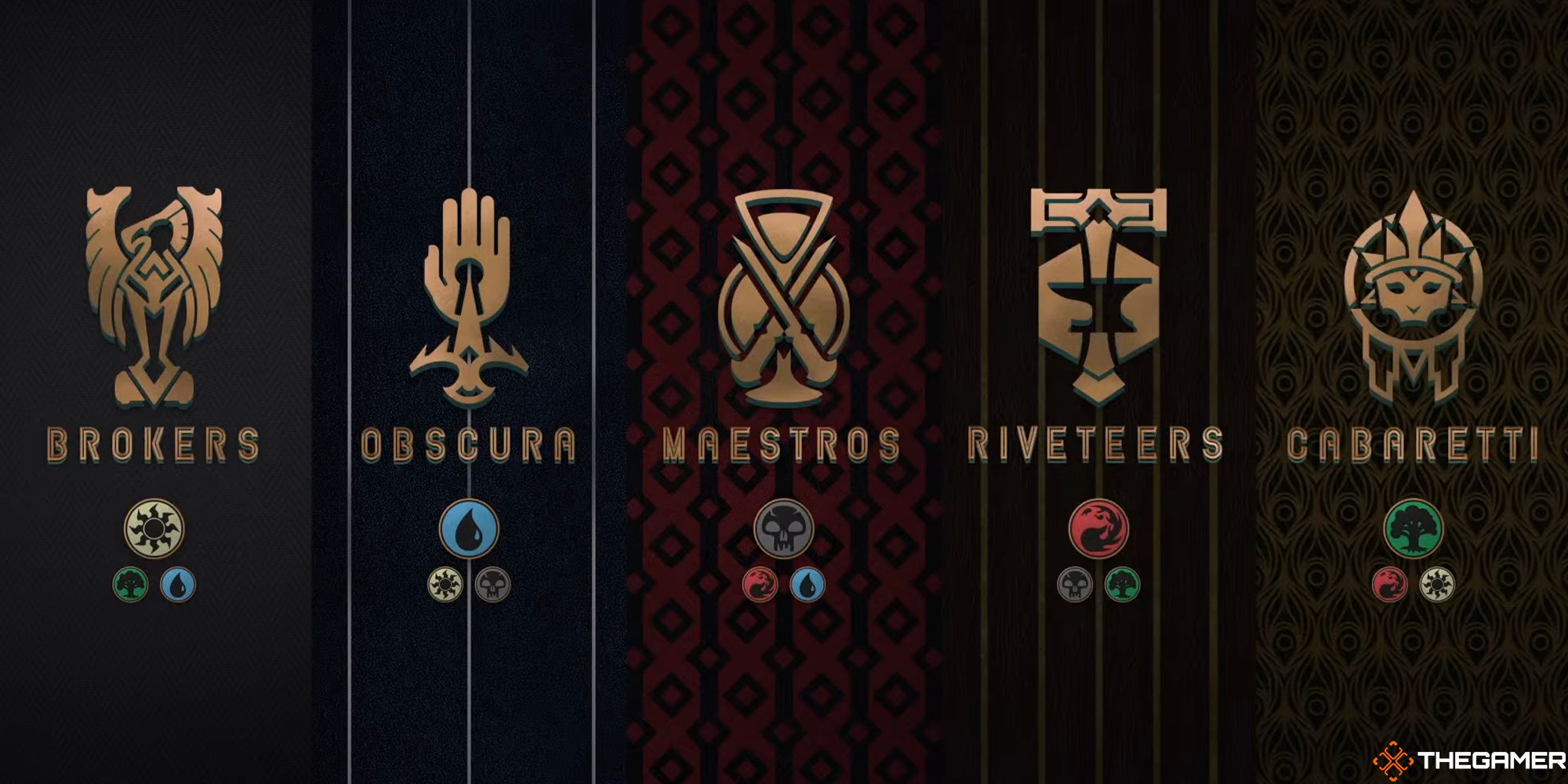 While we had already seen the five demonic crime mobs at the heart of New Capennan society, we hadn't yet seen much of their individual mechanics. Six mechanics were announced in the stream: five brand new, and one returning. 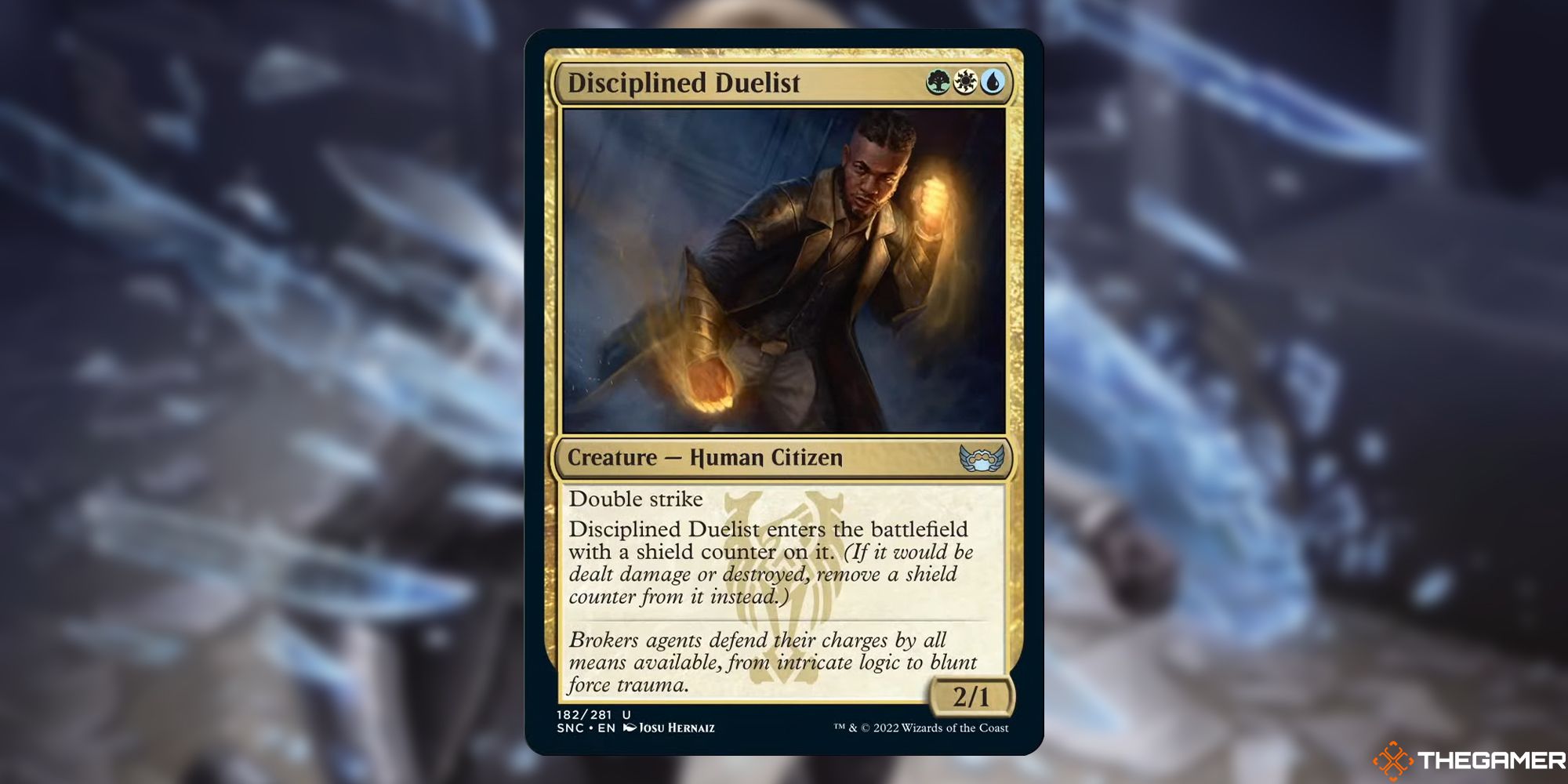 The Brokers are the green/white/blue legal eagles (sometimes literally) of New Capenna. They can stretch the magical laws that bind the city, offering 'protective services' to anyone foolish enough to sign on the dotted line. Their playstyle revolves around amassing as many different kinds of counters as possible, and then removing them for profit. Their mechanic is shield counters – if a creature with a shield counter would be destroyed or dealt any damage, you remove a counter from it instead. Think of it is a temporary version of indestructible. 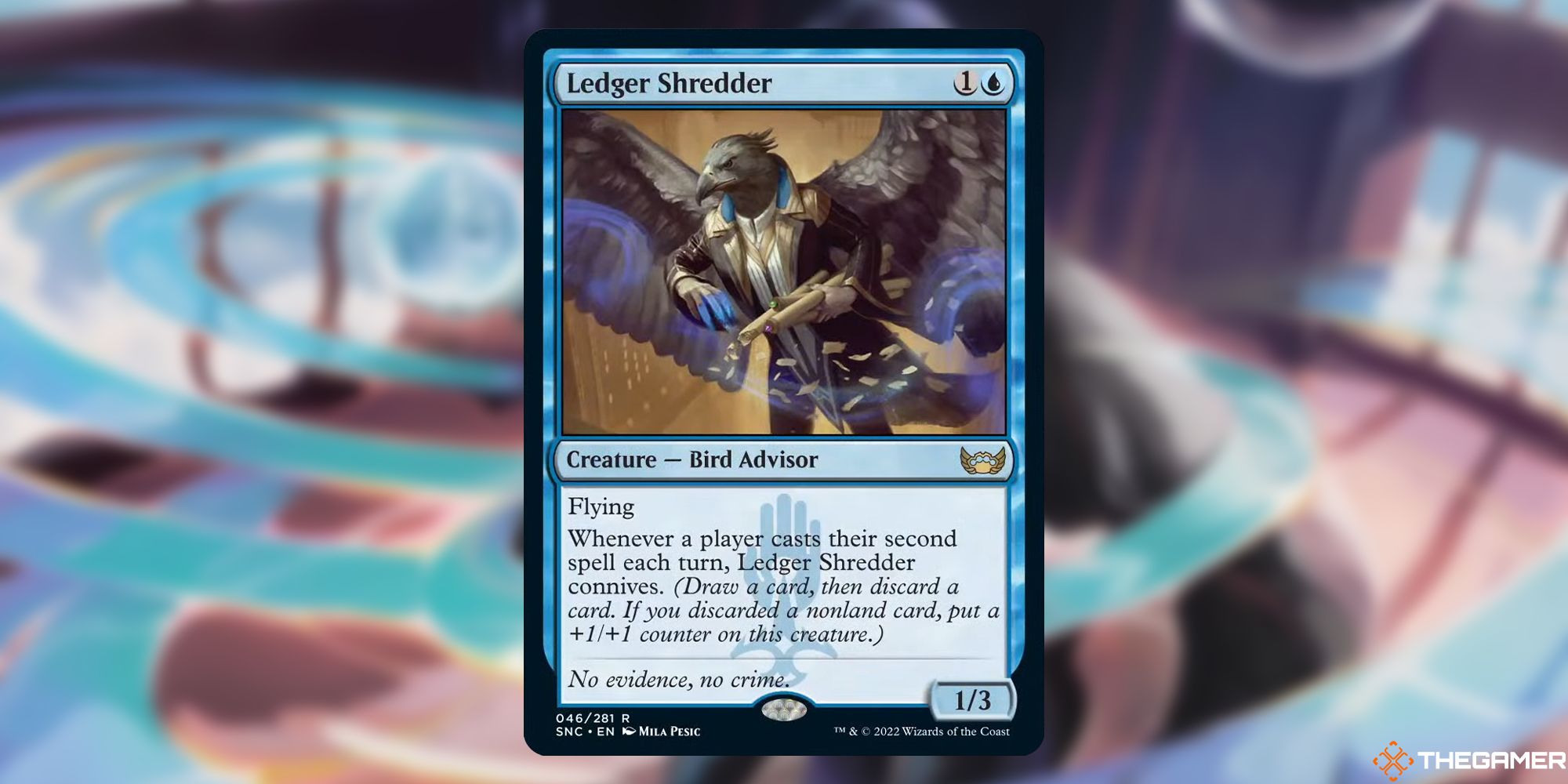 The Obscura are a shadowy organisation of mages, psychics and spies who trade information to maintain their grip on New Capenna. Represented by the black, blue, and white colours, their mechanic is Connive. Connive is a keyword found on creatures that tells you to draw a card and discard a card. If the card you discarded is nonland, you can put a +1/+1 counter on that creature. This is a great way to dump things into your graveyard or go looting for the answers they need. 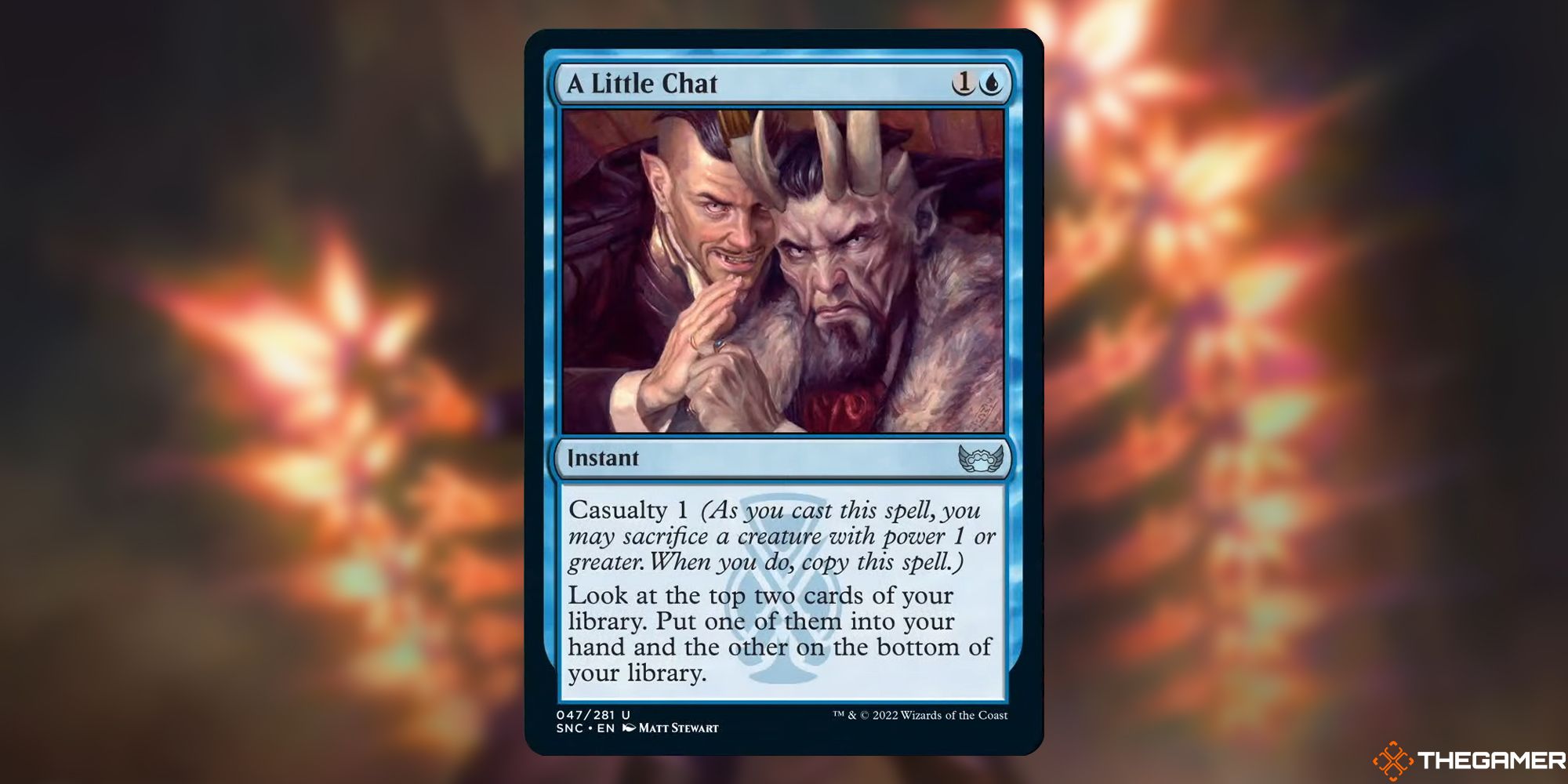 The Maestros are the city's red/black/blue art collectors. They love all things fine and elite, sitting at the top of the city away from the ruffians and enjoying their exquisite hordes of art. They're willing to take their possessions by force, though, as the Maestros are also a family of New Capenna's top assassins and thieves. Their mechanic is Casualty. You can sacrifice one creature with the specified power whenever you cast a spell with casualty. Keep in mind you can't sacrifice more than one creature to a casualty trigger, so you may sometimes be encouraged to sacrifice bigger creatures. 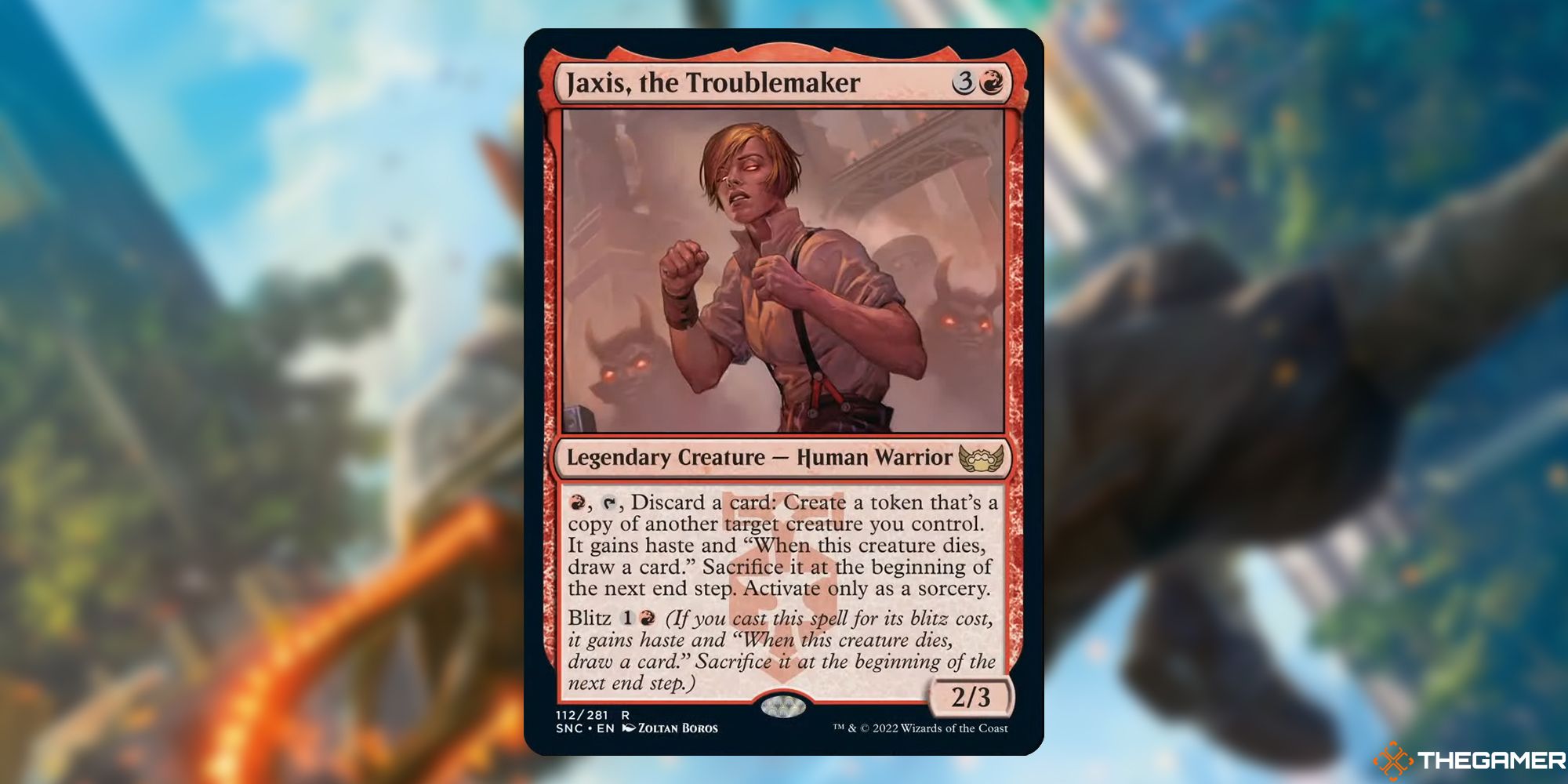 The Riveteers are the blue-collar crime family of New Capenna. Sitting at the bottom of the city in the slums, this disenfranchised group of construction and municipal workers are more than happy to let their fists do the talking in true black/red/green fashion. Their mechanic is Blitz. Blitz is an alternative casting cost you can pay when casting a creature. If you do, the creature enters with haste, but it only lasts until the end of your turn, at which point it will sacrifice. It's not all bad though, because when that creature dies for any reason, you'll draw a card. 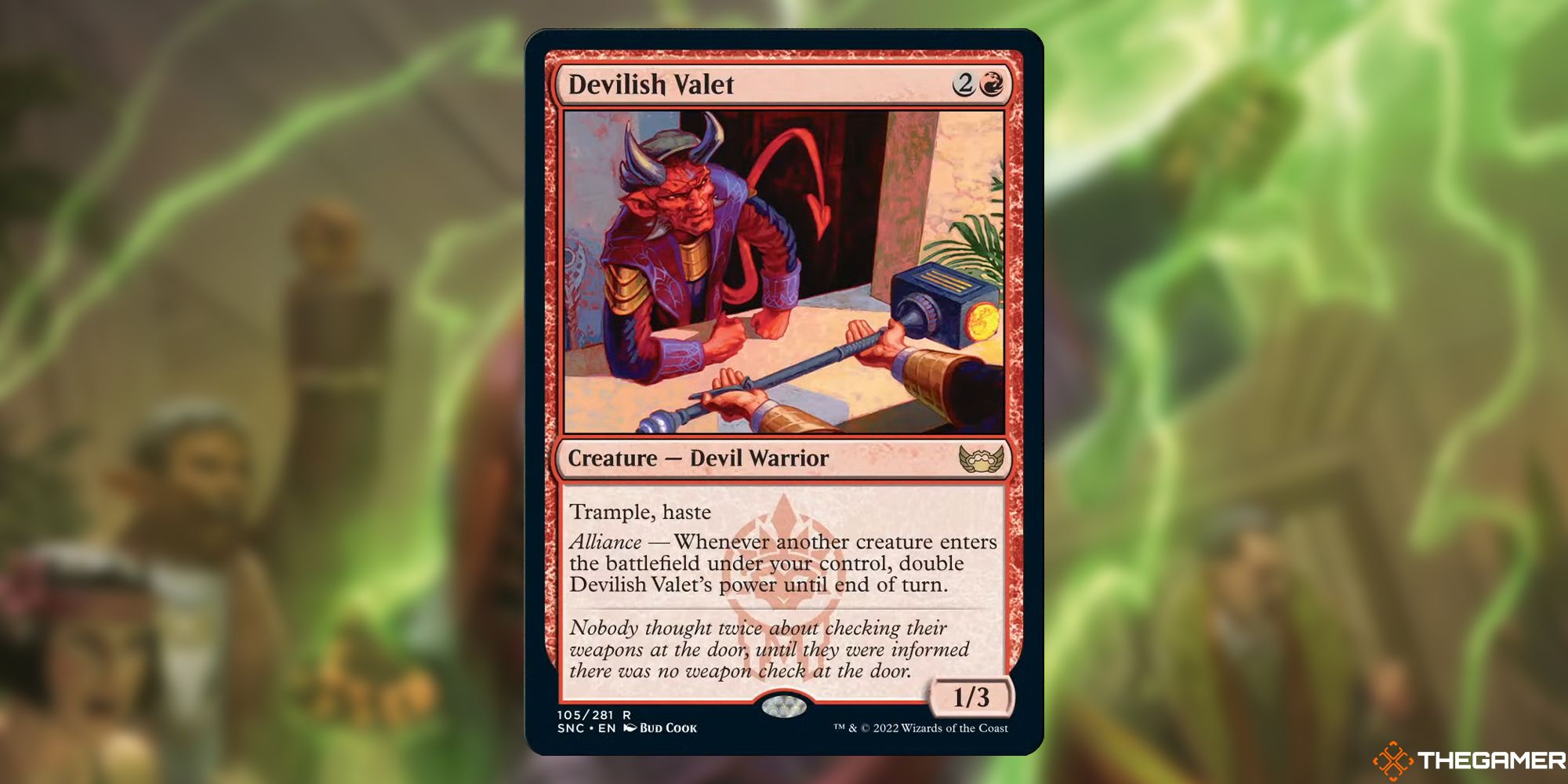 Finally, The Cabaretti are the red/green/white family who have a total grip on New Capenna's entertainment industry. All of the city's movers and shakers find themselves at Cabaretti parties, but will have a much harder time leaving without giving their loyalty to the family's boss, the demon cat Jetmir. The Cabaretti mechanic is Alliance. Alliance is maybe the scariest mechanic of the four, as it gives creatures a variety of triggers that go off whenever another creature enters the battlefield under your control. Token decks are going to absolutely love alliance to make sure the party never stops. 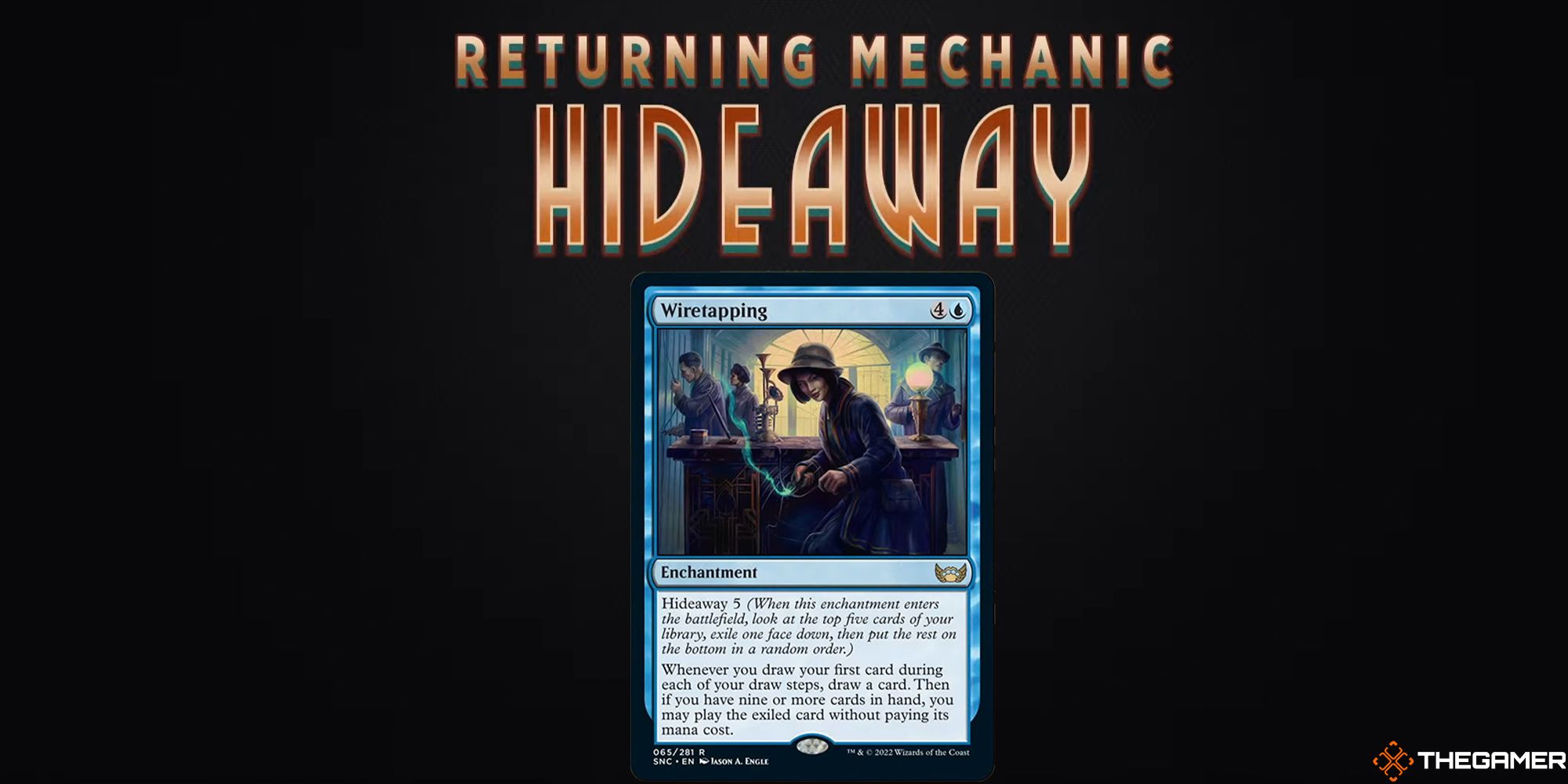 So far, only one returning mechanic has been revealed, and it's one we predicted a little while ago when Mark Rosewater gave his teasers for the set: Hideaway.

Hideaway was introduced back in 2007's Lorwyn, but it's been updated for New Capenna. The core concept is the same: look at the top few cards of your library, exile one face-down, and put the rest on the bottom of your library. Cards with hideaway will normally tell you when you can play that exiled card.

The difference for New Capenna is that the number is no longer fixed to just four cards. Permanents will have a hideaway number, which specifies how many cards you can look at. For example, Wiretapping has a Hideaway number of five, letting you look at the top five cards of your library. 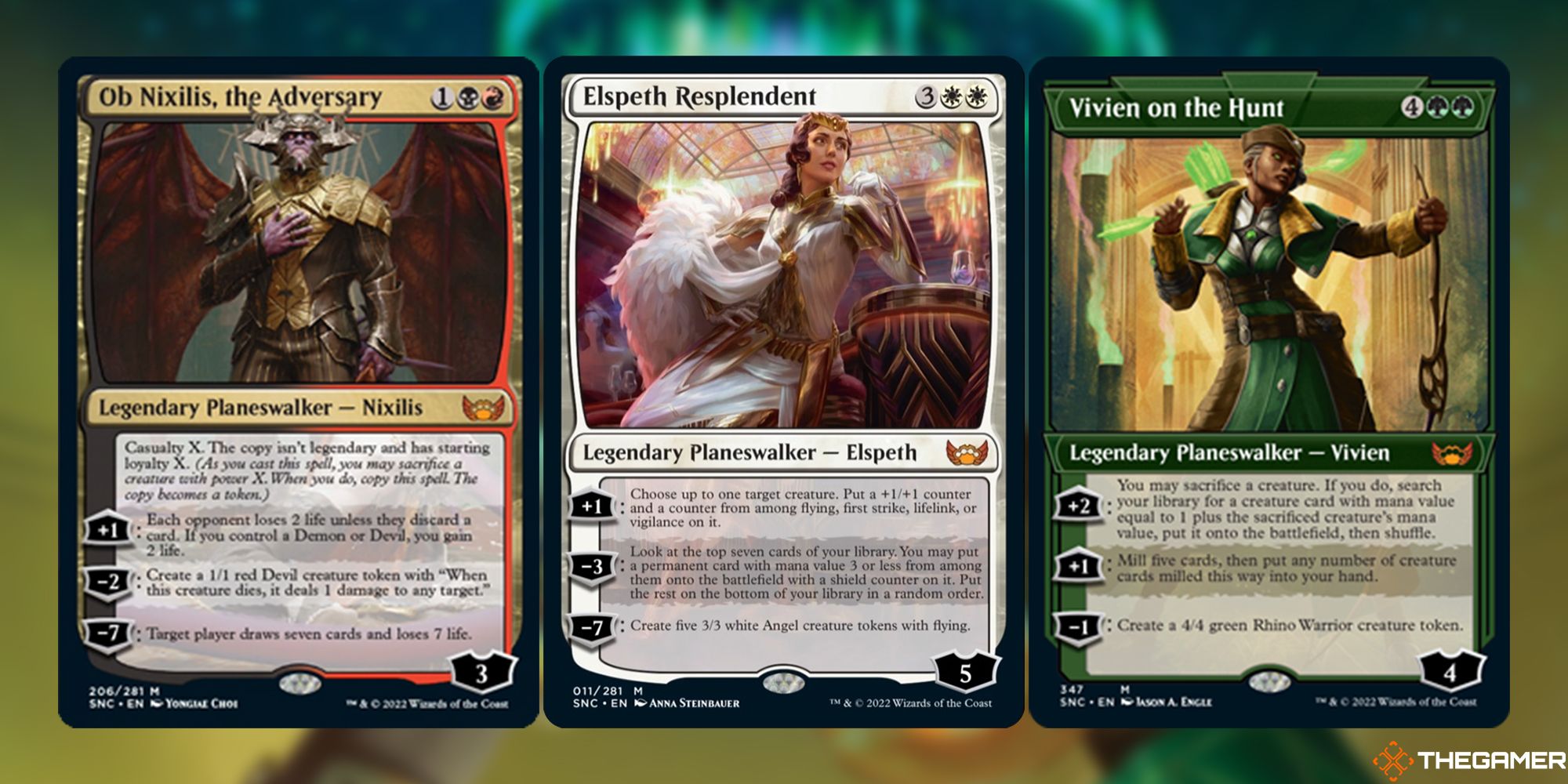 Like most other recent sets, there are three Planeswalkers at the heart of Streets of New Capenna. Unlike Kamigawa: Neon Dynasty, all three of these are already known characters within the story, though we do learn a few new things about them in this set.

The star of the show is Elspeth Tirel, who we last saw escaping the underworld of Theros in Theros: Beyond Death. New Capenna is actually her home plane, although she never saw the city as she spent her childhood locked away in a Phyrexian prison. Her Planeswalker card is Elspeth Resplendent, which can put a variety of counters on creatures and make lots and lots of angel creature tokens.

Vivien Ried is returning, having last been seen in Ikoria: Lair of Behemoths. She came to New Capenna investigating the Phyrexians, but found a plane devoid of natural life. Her ranger skills on other planes adapt nicely to the concrete jungle, though, as she takes on the role of a detective tracking down the praetor Urabrask. While her card wasn't shown off in the debut specifically, it was revealed immediately after to be Vivien on the Hunt. She is a creature-loving Planeswalker who will work as well in Stompy decks as she will in Graveyard ones.

Finally, the big baddie of the set is the demonic tyrant Ob Nixilis. Ob Nixilis begrudgingly fought alongside the Gatewatch in the War of the Spark, though he fled at the first available opportunity. He seemingly ran to New Capenna, where he has become an ambitious new crime lord seeking the powers of the planes' magical, angelic resource known as Halo. His card is Ob Nixilis, the Adversary, and ius the first Planeswalker to have the Casualty mechanic. The creature you sacrifice dictates the copy's starting loyalty, and the copy isn't legendary. He can produce devil tokens, force players to discard cards, and even draw seven cards with his ultimate ability. 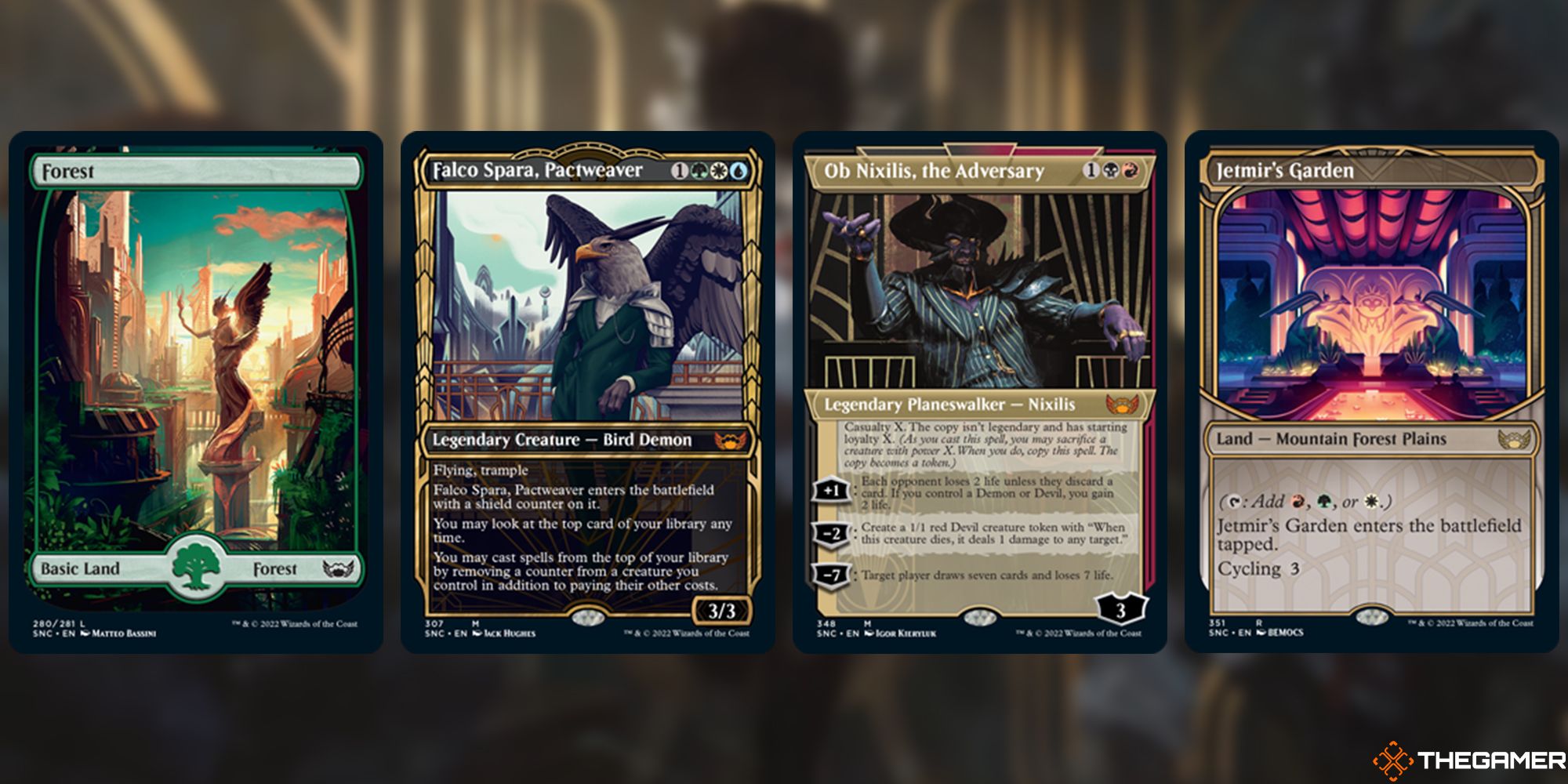 Showcase frames are alternate art styles unique to that particular set, and Streets of New Capenna has four.

The first are the full-art Metropolis lands. Found in one-third of set and draft boosters, and guaranteed in Collector's, these are gorgeously art deco renditions of New Capenna's architecture, showing both the highs and lows of life in the big city.

All 45 of the three-colour cards will be printed in the Golden Age style. These give the cards a flatter, more traditional look alongside towering golden frames that make them look right at home in the 1920s. There is also a foil style for these known as Gilded Foil, with faux-gold embossed into the card to give it a three-dimensional, shiny appearance. These are exceedingly rare, being found in between one and three per cent of set boosters, and between 13 and 25 per cent of Collector's.

Finally, Skyscraper frames will be given to the ten nonbasic lands of New Capenna (the five remaining Triome Lands, and the five common tap lands new to the set. This will give the cards an architectural appearance, like they're being seen through a lift in a fancy New Capennan tower. These are one of the more common showcase frames, being found in all three major types of packs in both foil and non-foil. 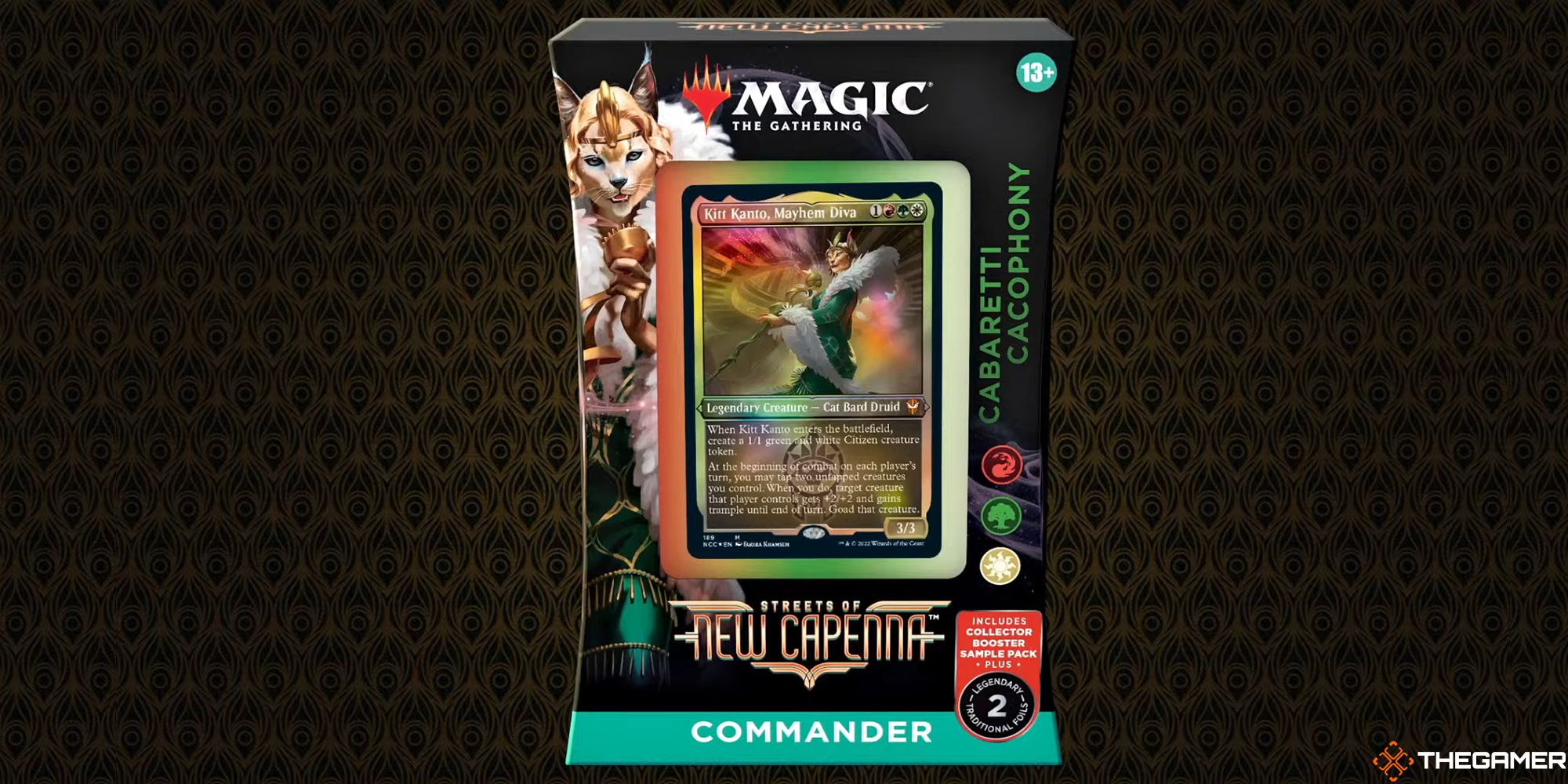 Though it isn't strictly part of Streets of New Capenna, we were given the first look at the New Capenna-themed Commander 2022 products. While most sets have a few tie-in Commander decks, the annual releases are bigger and bolder. This year's five decks are based on each of the families. 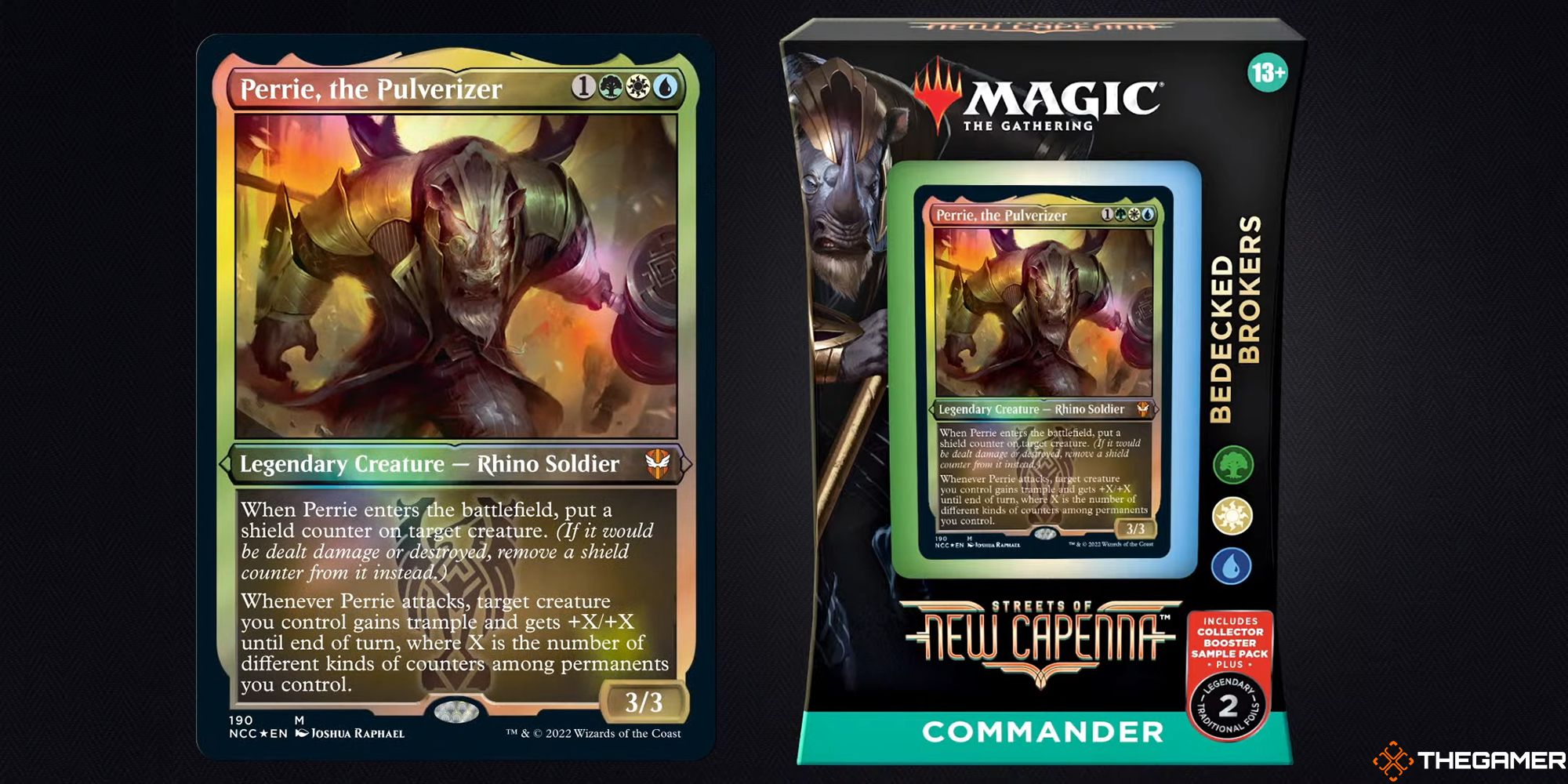 The green/white/blue Brokers deck is called Bedecked Brokers, and is headed up by its Commander Perrie, the Pulverizer. A 3/3 Rhino Soldier, he cares more about the different kind of counters you put on creatures over how many they actually have. He also uses the new shield counters mechanic to great effect, putting one on a creature when he enters ther battlefield. 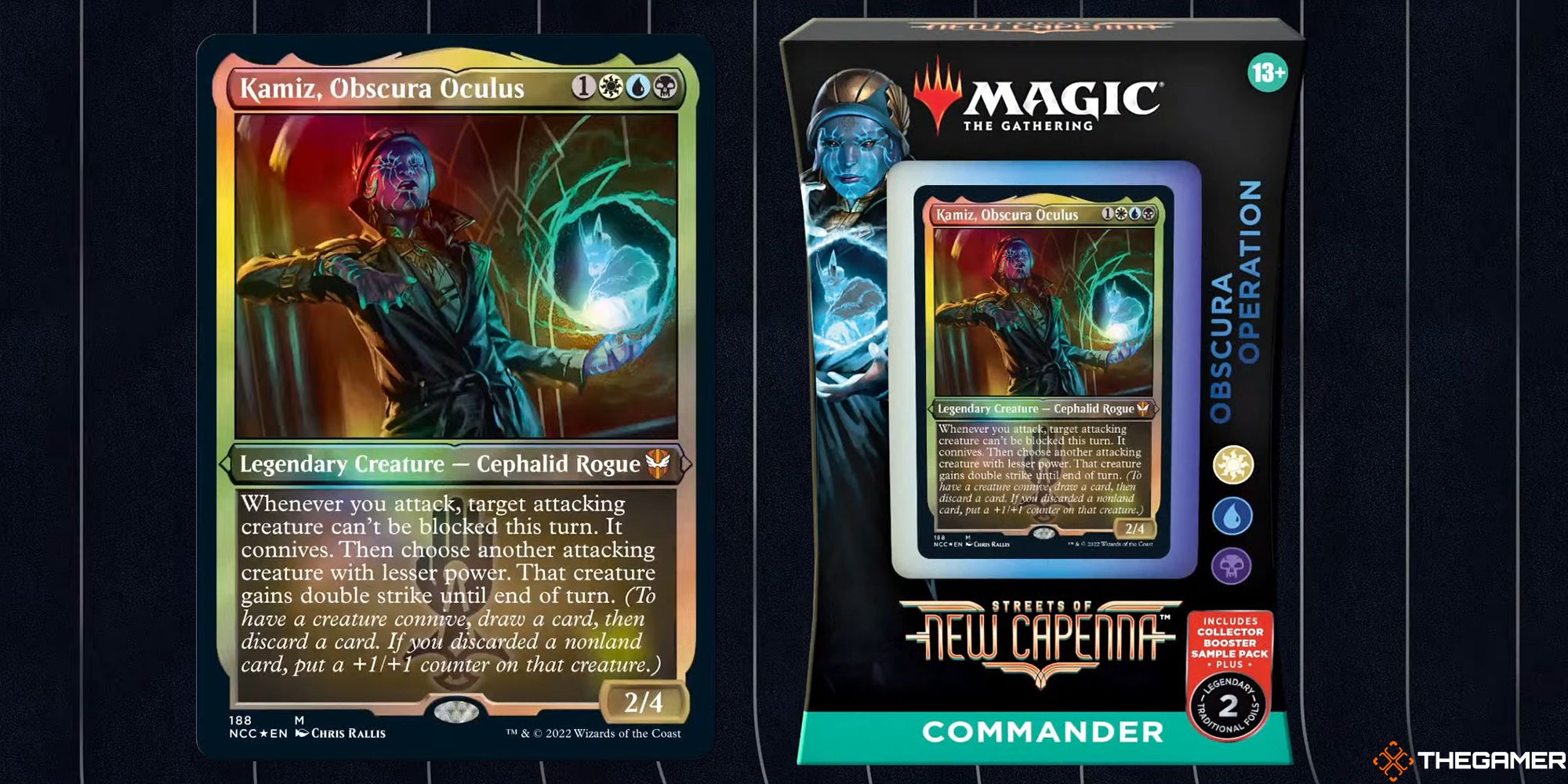 Obscura Operation is the white/blue/black Obscura deck. This deck loves combat, but not particularly with its Commander, Kamiz, Obscura Oculus. A Cephalid Rogue, she can make one attacking creature unblockable and connive, while another with lesser power gains double strike. It's interesting to see a deck in these colours so focused on combat, but it's a nice change. 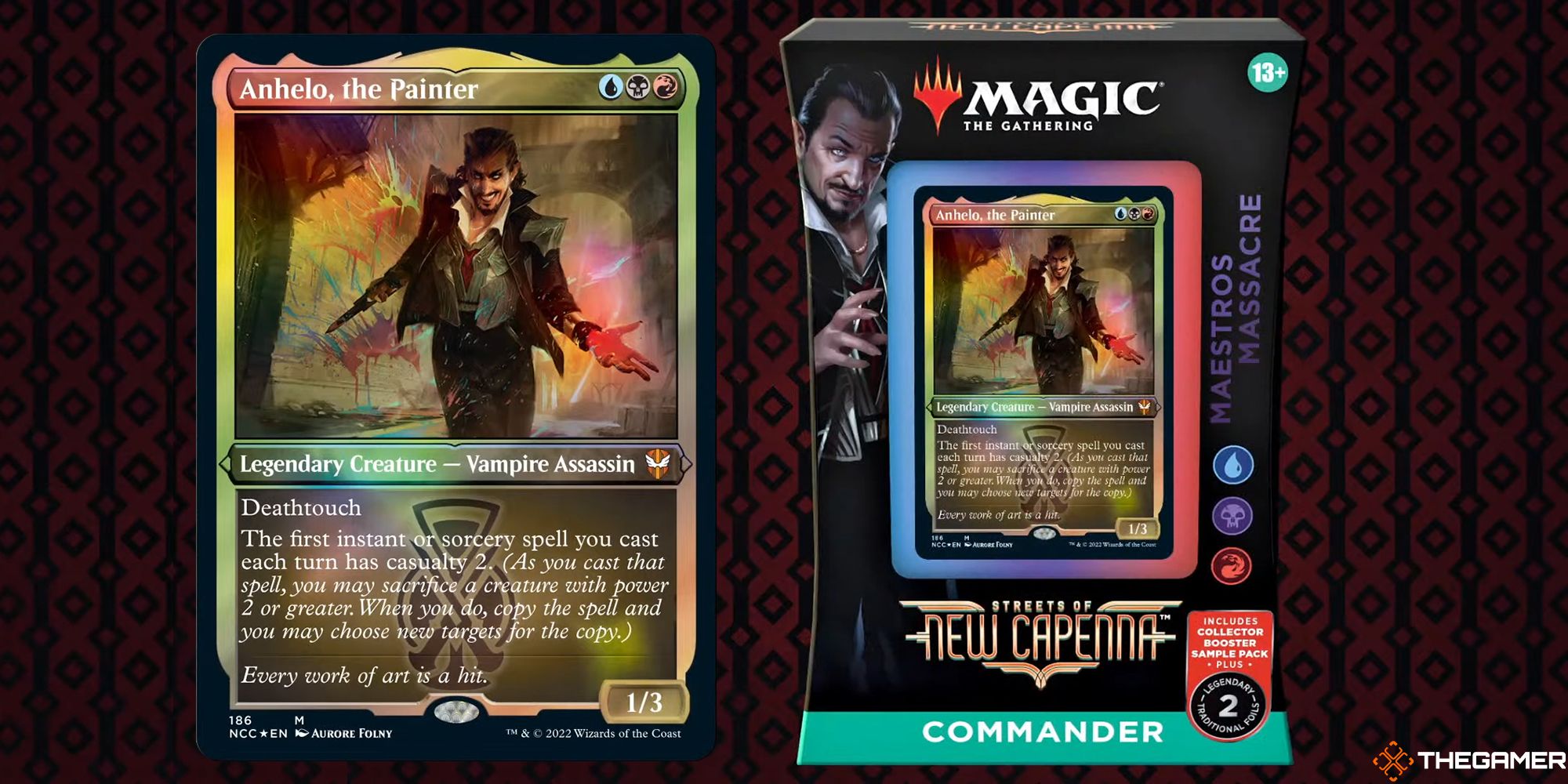 The Maestro Massacre deck is overseen by Anhelo, the Painter. He is a blue, black, and red vampire assassin; he has the nice and simple ability to give the first instant or sorcery spell you cast each turn casualty. That sounds reasonable until you remember cards like Time Warp are legal in Commander and could easily be copied just by sacrificing one creature. 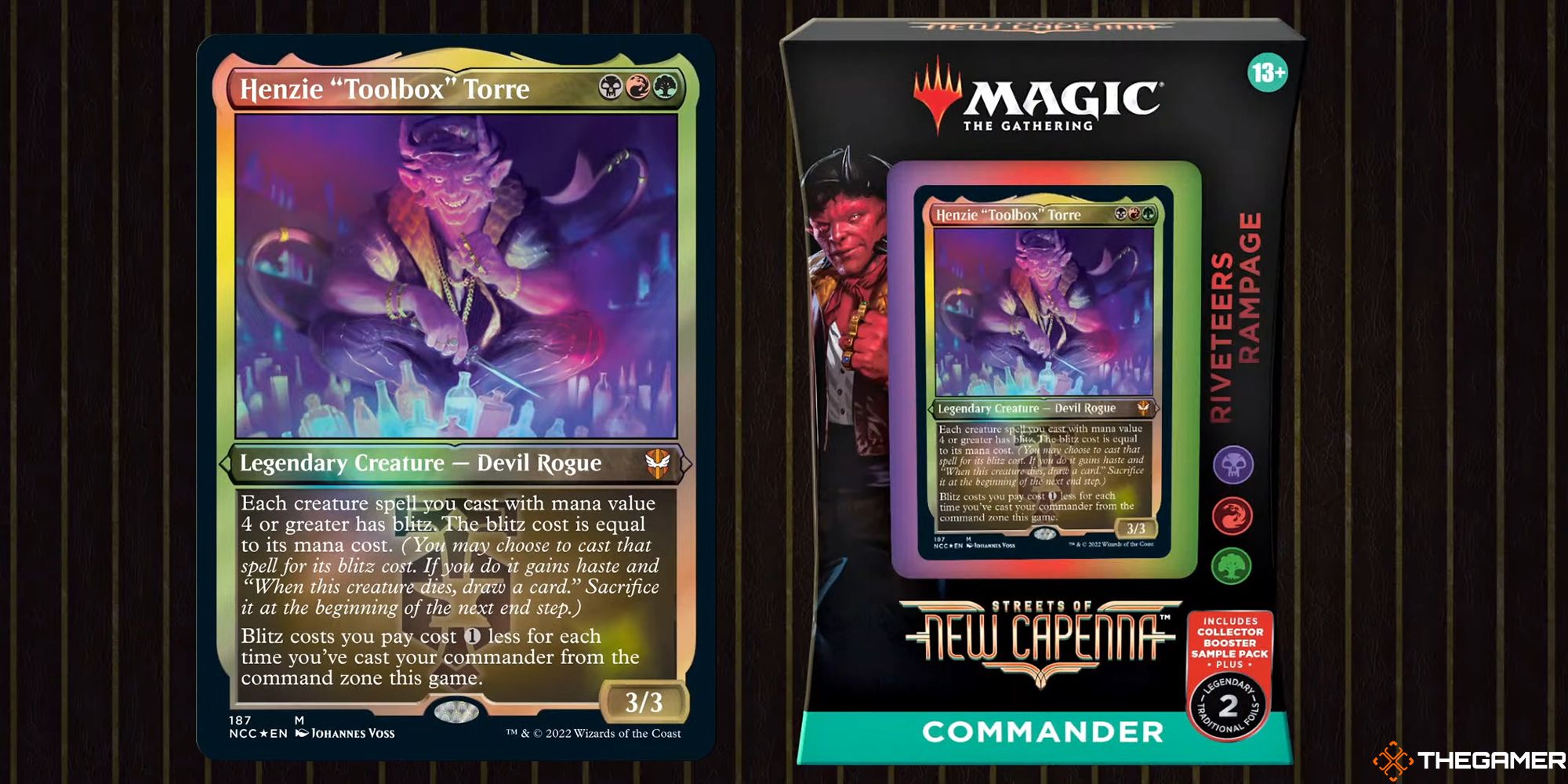 The Riveteers' deck is Riveteers' Rampage. Its commander, Henzie "Toolbox Torre", is kind of like Anhelo in that he gives other spells in your deck the family's mechanic – this time, Torre gives creatures with mana value four or greater Blitz. Though the Blitz cost initially costs the same as its mana cost, you can reduce that by one generic mana each time you cast your Commander from the Command zone. So cast Torre from the Command zone twice, and your creatures' dash costs will be two generic less. 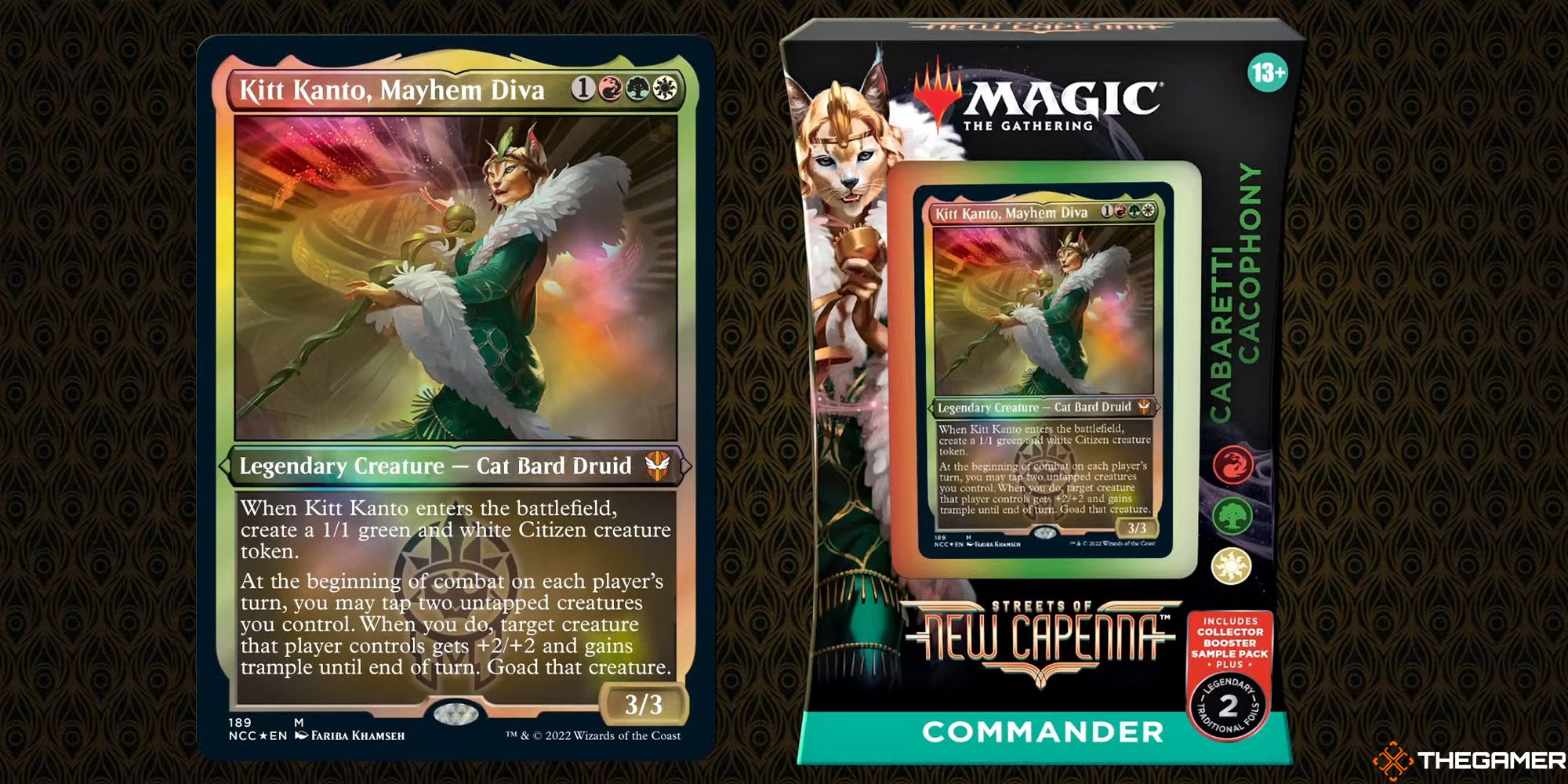 Finally, Kitt Kanto, Mayhem Diva is the face of the red/green/white Cabaretti Cacophony deck. The Cabaretti are all about tokens, the Kitt Kanto can both produce them and use them to goad your enemies' creatures. Goad recently became a "Commander Evergreen" keyword, meaning it will appear much more frequently in Commander products such as this.

This debut stream marked the start of Streets of New Capenna's preview season. Over the next eight days, a number of content creators will be sharing cards from the set, ending with a full reveal of the five Commander preconstructed decks that will make up Commander 2022.