During our trip to Respawn for our Star Wars Jedi: Fallen Order cover story we spent a lot of time with the developers talking about the process of designing and creating a new canonical Star Wars video game, played with the lightsaber combat extensively, and watched a handful of hands-off demos through various levels. We also talked about the story, but that was the element the game’s director, Stig Asmussen, was the most hesitant to offer extensive details about. His reticence is understandable as it is the element that hides the most surprises and is the most prone to spoilers. We got some spoiler-free details out of Asmussen and the team though, and we shared many of them in our cover story (which you can read in full here), but we wanted to take this opportunity to share everything we know so far. 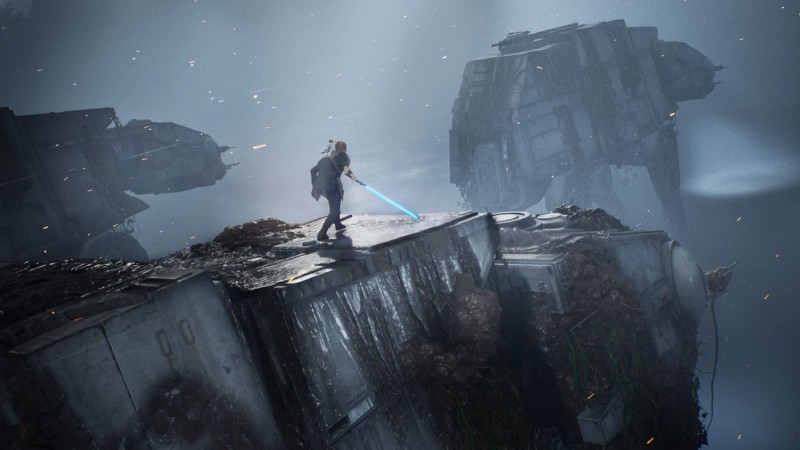 Before diving into what we learned at the studio, Lucasfilm made a small, easy-to-miss announcement during E3 that sheds at least a little bit of light on the setup for Fallen Order’s story. Early in the game, Fallen Order’s protagonist, Cal Kestis, meets a Jedi named Cere Junda. Much like Cal, Cere survived Order 66 and the two work together to try and revitalize the Jedi Order during the course of the game. A five-issue comic book prequel series, coming in September, will look at Cere’s past. Through this announcement we learn her master is a Jedi named Eno Cordova and the two travel to the remote planet Ontotho to “oversee the excavation of a mysterious temple.” Cere and Eno are both entirely new characters and the planet they travel to, Ontotho, also appears to be new. We know that at least part of the game will “explore the mysteries of a long-extinct civilization in hopes of rebuilding the Jedi Order,” according to the game’s official website. Is the mysterious temple on Ontotho part of that long-extinct civilization? While at the studio we asked Asmussen if he could reveal anything about the “long-extinct civilization” and all he said was “not today” with a laugh.

You can read a broader rundown of the game’s narrative in the cover story, but here are the big beats with additional quotes from Asmussen. It’s well known that Fallen Order takes place after Revenge of the Sith and before A New Hope. That was one of the few details revealed alongside the game’s name at E3 2018, but Asmussen gave us a hint at about how long it takes place after the third prequel film. “It’s years,” he says, which gives you a little insight into how old Cal is and how old he was when everything happened, but it’s still vague. “You can kind of piece it together. When he was a padawan, he was an adolescent. Clearly he doesn’t look like that in the character art, but his age doesn’t really matter to us, to the point where we see [his age] in the databank, it’s just going to have a question mark. We just wanted to make sure we had a young protagonist in the game.”

We asked Asmussen what level of Jedi Cal is, and he said, “He’s a padawan.” He’s done some official Jedi work, but he’s not a knight, that we know for sure. “Before Order 66, he was seeing what was going on in the galaxy. He probably took part in a couple of missions, but it’s not like they were sending him out like Anakin or anything like that,” Asmussen adds. 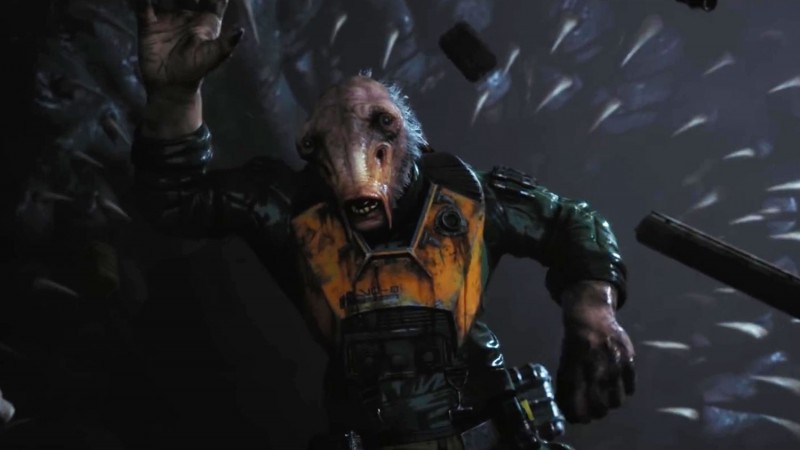 Cal survived Order 66 and went into hiding on the planet Bracca where he keeps his abilities secret while working for a ship dismantling guild. “He’s working on the ship-breaking yard, and he’s kind of weary. They’re tearing down these old Republic vessels, which is symbolic to the Fallen Order,” Asmussen says. “He’s just trying to lay low.” Something causes him to use his powers publicly, and it’s safe to assume it is to help his co-worker and presumed Abednedo friend, Prauf, that we saw in the game’s story trailer announcement. Respawn was hesitant to fully confirm that, but Asmussen said, regarding when Cal will be thrust into the adventure, “It’s very early. It’s kind of the call to action. We have a level at the beginning of the game where we kind of set up his reality and then we turn normal upside down. His life becomes chaotic within a matter of minutes. He comes in contact with [Cere] shortly after.”

We don’t know exactly when or how Cere will discover Cal. “She pieces together information… I don’t want to give away exactly how she does it, but she pieces together how to find this individual. It’s not something I want to talk about,” Asmussen says. Once the Empire knows about Cal, the Second Sister is sent after him. The Second Sister is an Inquisitor, which is a group the Emperor established to track down and kill the remaining Jedi. Another of the Emperor’s hunters is Darth Vader. We saw no hints or teases of an Emperor or Vader cameo during our time at the studio, but we know he’s out there in the galaxy hunting, and wouldn’t be surprised if he showed up. We asked for more on the Second Sister, but Asmussen cryptically said, “I think it’s best not to talk about her.”

Asmussen was also reluctant to offer up more details on the state of the Empire during the point where Fallen Order takes place, but mostly because those broader details of the Star Wars timeline, which are covered outside of the game in other media like TV, comics, and novels, are for Lucasfilm to decide on and extrapolate. “I think would be better for Lucasfilm to speak to that, but in our game, the galaxy is looking for strong leadership after years of war. They are looking for someone who is going to control things,” Asmussen says, “It’s not to the point where the population thinks the Emperor is bad.” 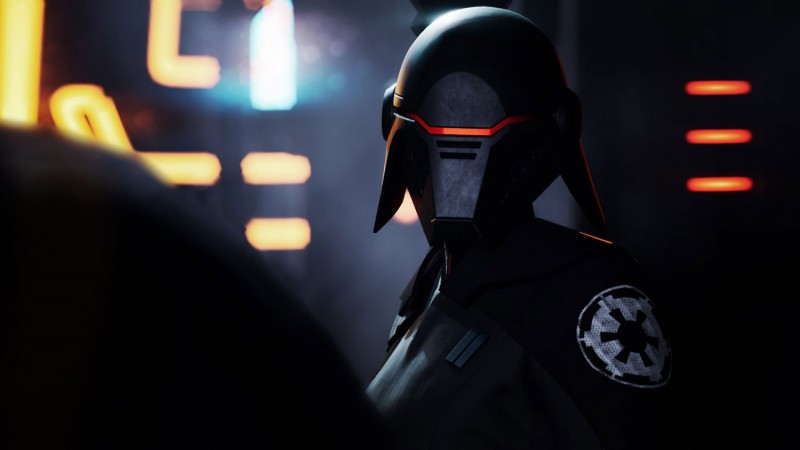 Cal reluctantly joins with Cere’s cause in an effort to stay safe, which is how he becomes part of the crew of The Stinger Mantis under its captain, Greez Dritus. We don’t know why Greez is helping Cere and Cal (or maybe they’re helping him), but we know in terms of what kind of character he is, Asmussen sites John C. Reilly and Mr. Furley from Three’s Company as his major inspiration. 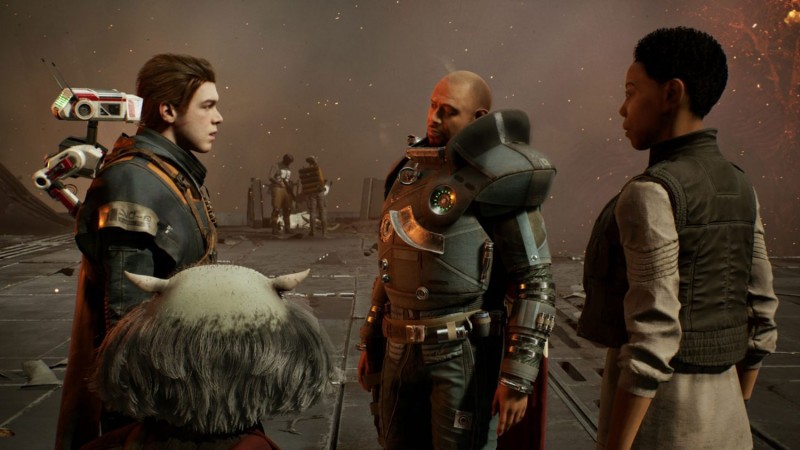 The gameplay demo shown during E3 saw Cal exploring Kashyyyk and revealed Saw Gerrera is in the game, but while at the studio we got to see the few minutes of gameplay leading up to where that demo started. We got to see Cal and Saw’s first meeting and Cal revealed he came to the planet explicitly to find Wookiee chieftain, Tarfful. It seems like he came to Kashyyyk just to talk to Tarfful, but got caught up in the resistance efforts when he met Saw, which is why he gets put on the path to free him. Saw asked Cal what he wanted with Tarfful and Cal responded, curtly, “Jedi business.” To which Saw replied, “The Jedi are dead,” and Cere retorted, “Not all of them.” You can see clips, though brief, of this meeting in Fallen Order’s E3 2019 trailer. The other interesting tidbit from their meeting was when Saw looked at Cal’s lightsaber he asked, “Did you get that off a corpse?” “My master gave it to me,” Cal said. And that’s about where the E3 gameplay demo picks up. 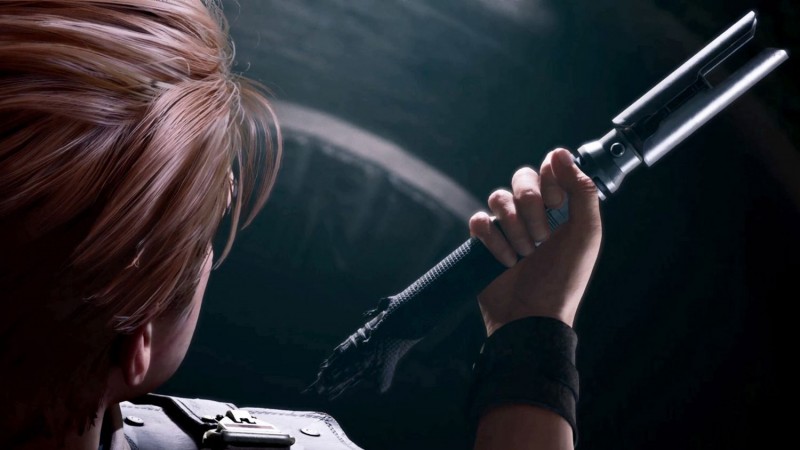 The game’s narrative represents one of the biggest question marks we have for Fallen Order at this point. We enjoyed our time with the combat and were impressed by the exploration and Metroid inspirations of the level design. The story is something we won’t be able to get a clear picture of until we’ve played the final game, unfortunately, but given the details we know so far, and Asmussen’s history with the God of War series, we’re optimistic and eager to find out where it goes in November.

For a whole lot more on Fallen Order, you can read the full cover story here, and click the banner below for all of our features covering the game throughout the month.