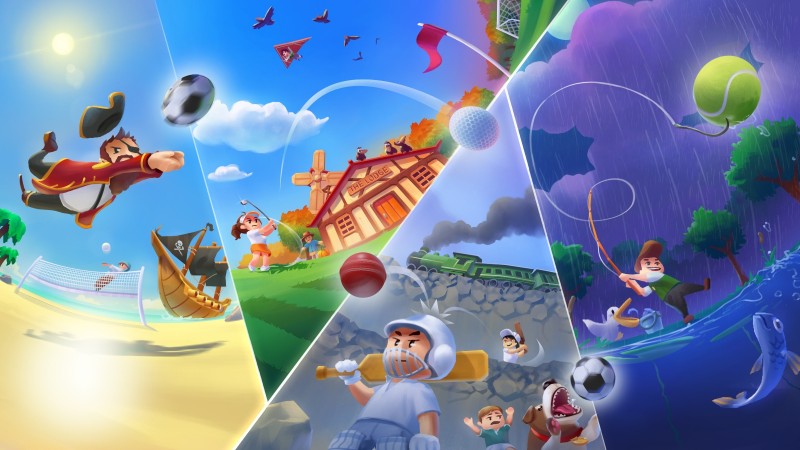 Nintendo’s latest Indie World Showcase has come and gone. Sure, Hollow Knight: Silksong didn’t appear for the umpteenth time in a row, but that doesn’t mean there weren’t other titles worth putting on your radar. If you missed the festivities, this recap summarizes some of the bigger, newly revealed games heading to Switch before wrapping up with a quick recap of smaller game updates.

Once Upon a Jester

Launching later today, this humorous-looking tale stars two best friends plotting to steal a royal diamond. The only way to do that: join an improv theater troupe. Players travel across the kingdom on a quest to outperform other acts by performing improvised musical theater where no two shows are alike. What can go wrong? Depending on your choices, a whole lot, but at least it’ll probably be funny.

After years of waiting, the follow-up to Golf Story is finally coming to Switch sometime next month. Unlike its predecessor, this role-playing adventure now features multiple sports, including fishing, soccer, and tennis. But if you played Golf Story, you know the game is much more than an athletic showcase. Make friends, battle enemies, travel the globe in search of knowledge, and even engage in espionage in this wacky genre-bending epic.

Play as a red panda in this cozy open-world simulator inspired by ‘90s animated films. As the retired warrior Aka, you’ll farm, craft, and relax on an island paradise in order to achieve inner peace. Side quests rope in more purpose-driven players, such as helping villagers and freeing the ghosts of your past.

A Space for the Unbound

Set in rural Indonesia during the ‘90s, this slice-of-life adventure centers on a relationship between two high school sweethearts. Oh, and one of them has the power to read minds. When their small town is threatened by supernatural occurrences, it’s up to the pair of them to get to the bottom of it while also learning more about each other.

Oni: Road to be the Mightiest Oni

Simultaneously control a vengeful demon warrior and his spirit companion on a quest to reclaim your pride. This single-player game tasks you with slaying enemies as the warrior, then absorbing their souls as the spirit. An open-world hosts a variety of powerful supernatural enemies, some so powerful that fleeing instead of fighting actually benefits your stats.

Goodbye World’s story spotlights the struggles of indie game development while featuring two styles of play. Part narrative adventure, you’ll experience the story of two young game designers struggling to make ends meet. The other half is a Game Boy-inspired puzzle-platformer played by one of the protagonists. You can find out how these disparate styles come together when Goodbye World comes to Switch and PC next Spring.

This action-platformer stars a shipwrecked treasure hunter wielding a gigantic drill. You drill through walls and the earth itself to recover lost treasure. You can upgrade the drill with new abilities used to access more areas, and the grinding through levels and enemies looks like a blast.

In this first-person game, you play a retired 19th-century botanist solving plant puzzles in and around a grand mansion. Doing so involves finding the best spots to grow certain plants while learning about yourself by uncovering clues and inspecting objects.

Here’s a quick list of games that had smaller appearances. Some are existing indies making their way to Switch, while others received release windows for the first time.

A Little to the Left – This cozy puzzler features over 70 organization puzzles all about tidying up spaces with visual and logic puzzles. It’s out now on PC (read our positive review here), and it comes to Switch … later today!

Blanc – A fawn and a fox join forces in this black and white co-op adventure on February 14.

Curse of the Sea Rats – The hand-drawn action “Ratoidvania” plunders Switch in early 2023.

Desta: The Memories Between – this emotionally charged turn-based dodgeball adventure by the maker of Monument Valley heads to Switch early next year after releasing for mobile devices via Netflix earlier this year.

Have a Nice Death – The grim reaper action roguelite, currently playable in Steam Early Access, is coming to Switch on March 22.

Inscryption – One of 2021’s most acclaimed and mysterious titles finally deals a new hand on Switch on December 1.

Storyteller – Mix and match characters and props to build your own fairytales in this unique puzzle game on March 23.

Venba – A strikingly colorful narrative cooking game about an Indian family’s immigration to Canada serves up an emotional story in Spring 2023.

Wobbledogs Console Edition – This bizarre 3D pet simulator arrived in March and will bring its physics-based sandbox to Switch next year.

World of Horror – Currrently in PC Early Access, this turn-based roguelite draws influence from the works of Junji Ito and H.P. Lovecraft. It heads to Switch next summer.

WrestleQuest – Oh yeah! This pro wrestling and JRPG-inspired adventure steps into the ring sometime next May.

What’s your favorite announcement out of Indie World? Which games are you looking forward to playing the most? Let us know in the comments!

A Little to the Left

A Space for the Unbound

Oni: Road to be the Mightiest Oni

Once Upon a Jester