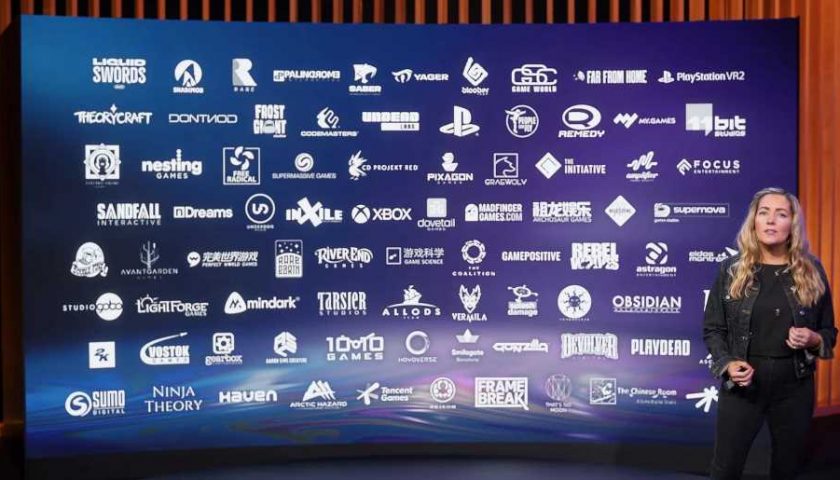 During its State of Unreal presentation this week, Epic Games confirmed that there are PSVR 2 titles in development using Unreal Engine 5.

Back in May 2020, Epic Games unveiled the next generation of its engine, Unreal Engine 5, which promised big graphical and technical leaps. That demo focused particularly on two big new technologies — Nanite (a geometry technology that lets artists create highly intricate details on objects and surfaces) and Lumen (a dynamic global illumination system for realistic lighting).

Epic Games confirmed to UploadVR at the time that Unreal Engine 5 would continue support for all current VR headsets.

Announced in yesterday’s presentation, Unreal Engine 5 is now available to all developers. At around the 26-minute mark in the video embedded below, Dana Cowley, Communications Director, Technology at Epic Games, spoke in front of a large graphic featuring many game studio logos. She then said that Epic was “thrilled to confirm that all of the amazing studios that you see here are a part of the Unreal Engine 5 community, which continues to grow every day.”

Interestingly, the PlayStation VR2 logo was displayed in the top right, even though it’s a piece of hardware and not a game studio itself. That being said, the intent is clear — there are studios who are developing PSVR 2 games using Unreal Engine 5.

If you take a closer look, you’ll also spot a few other studios and publishers who have flirted with VR before. Most notably, Fracked and Phantom developer and Little Cities publisher nDreams is listed. Just last week, nDreams announced a $35 million investment and confirmed they were working on PSVR 2 titles.

Bloober Team is also listed, a studio who has previously brought some of its flatscreen titles, like Layers of Fear, over to VR headsets.

Devolver Digital is listed, who previously published VR games like Gorn and more recently, Tentacular. Last but not least, 2K is also listed — a subsidiary of parent company Take-Two (who have said more VR titles are on the way) and developer of the Borderlands franchise and its brief dive into VR.

Keep your eyes open for more PSVR 2 news as the year progress — or even just one eye, if you’re using eye tracking.