Front announced today that it has raised $59 million for its collaborative email platform in a funding round that comes with a twist. Rather than being led by venture capital firms, the San Francisco-based company cobbled together a consortium of entrepreneurs who are also focused on defining the future of work.

When Front went looking for its third round of funding, the founders decided they wanted to build closer ties to companies who were attacking the problem of fragmented workplaces from different angles. The result was a round whose main investors were the entrepreneurs behind such workplace software companies as Atlassian (team collaboration software), Okta (workforce and customer identity management), Qualtrics (experience management platform), and Zoom (video conferencing).

“They think about the future of work every day,” said Front CEO and cofounder Mathilde Collin. “We thought they might be able to provide some thoughts about how things get done in this space. Because if you won’t reinvent the most fundamental tools that we use at work every day, like email, you won’t make a big impact.”

The funding alliance is an indication of just how big the problem of workplace collaboration remains and how the rush to solve it is causing the competitive landscape to rapidly evolve.

The market for workplace collaboration tools is booming as companies struggle with opposing dynamics. On the one hand, employees at work are more connected than ever on a wide range of devices. Their companies have more data on their customers, products, and employees than ever before. And yet these trends risk leaving employees feeling more disconnected and isolated, while companies struggle to harness the potential of this information and technology.

This massive problem has attracted a flood of competition. According to a September 2019 report from market research firm Gartner, the global market for workplace software that enables more social interaction and collaboration will grow from an estimated $2.7 billion in 2018 to $4.8 billion by 2023.

The companies deploying these services are hoping that efforts to reinvent their internal workplace culture can get a boost if they just assemble the right combination of tools. Beyond increasing productivity and helping customers, the creators of such tools argue that they will help employees feel happier and more creative at work.

“It’s essential for any company to facilitate opportunities for on-going collaboration,” said Therese Gedda, founder and CEO of 30minMBA, a workplace culture and executive coaching company that focuses on the future of work. “Different tools can certainly help with this, especially for distributed teams. When technical solutions remove the barrier of communication and enable belonging, they can be very powerful.”

Many of the tech giants are attempting to tackle this space, including Workplace by Facebook, Office 365 and Teams from Microsoft, and Gsuite from Google. Then there’s Slack, with a cult-like devotion that helped it go public last year.

But the market remains heavily fragmented overall, according to Gartner, with no company gaining a dominant market position or creating a suite of tools that seems to completely solve these issues. As a result, the many startups coming into the space are attacking different pieces of the problem, such as employee communications, meeting solutions, or project management.

These include Monday.com, which raised $50 million in 2018; Coda, which officially launched last year; and LumApps, which today also announced a round of $70 million for its Social Intranet service. Then there are companies like Klaxoon which raised $50 million in 2018 for its SaaS meeting service that works across just about any device and includes features like timekeeping, brainstorming tools, and an interactive white board.

At CES 2020 In January, Klaxoon introduced Teamplayer, a console that amps up collaborative white boards and screens. “Teamplayer draws on the interactive and playful spirit of video games and on the power and ergonomics of digital music-making tools to revolutionize our working environment and the way we interact in teams,” the company said in its announcement. “Mouse and screen, paperboards, email, or slides all fail to overcome the new challenges we face at work: abolition of physical and time barriers, dramatic increase of information flow, [and] expanding number of teams and projects.”

Many of these companies have created an elaborate set of partnerships and integrations, allowing clients to mix and match in an attempt to patch together a customized solution that fits their own needs. Front is hoping to be one of the big winners in that marketplace.

The company’s email tool allows employees to collaborate and manage internal messages and email from customers and partners. Collin said email hasn’t evolved sufficiently to work well for teams. Front pulls together emails, as well as live chat, social media, and SMS and integrates into platforms like Salesforce’s. 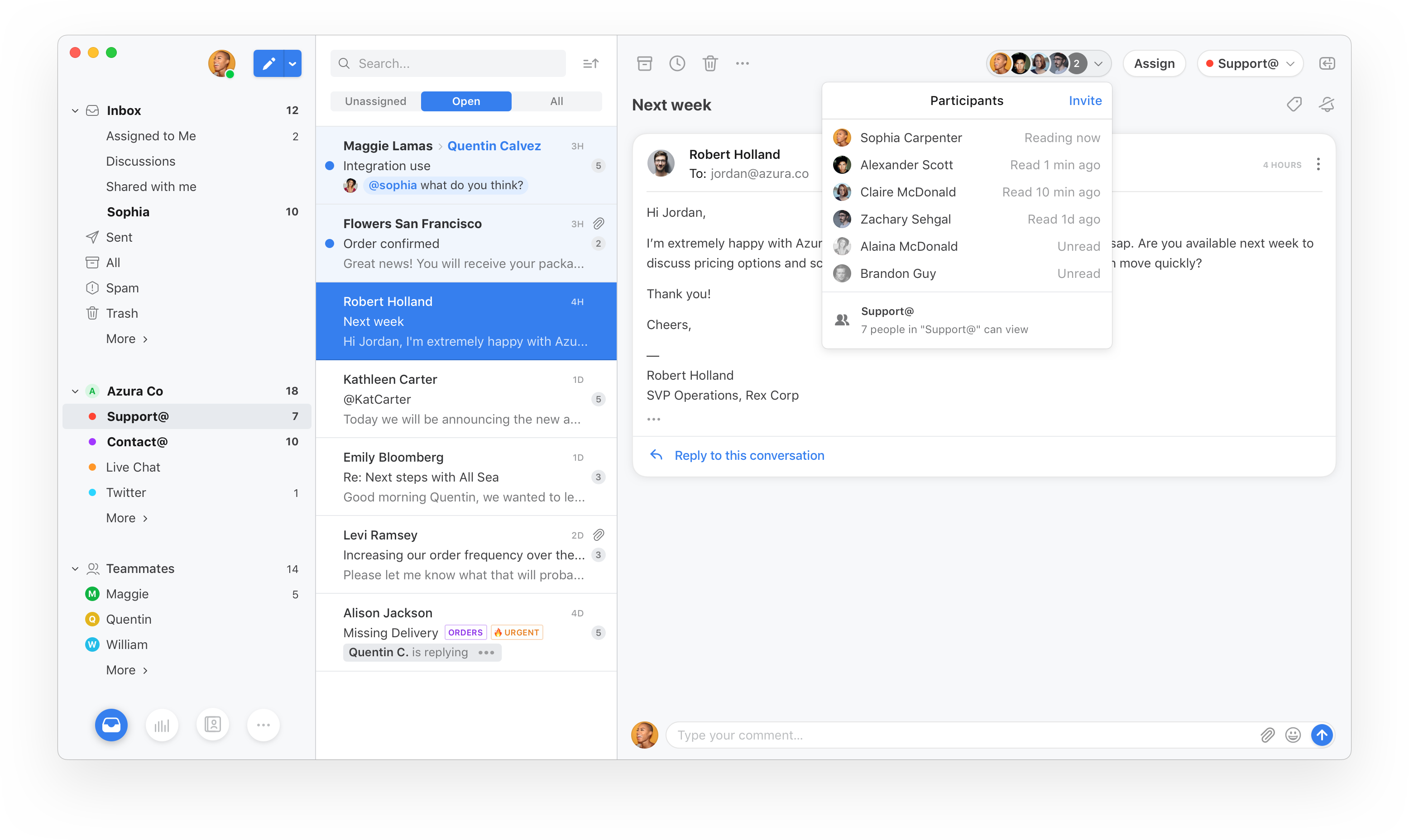 The goal is to centralize all conversations in a single place so companies can coordinate responses, comments, and message-tracking. Collin said consumers want a more authentic relationship with brands, employees want to feel fulfilled at work, and businesses need to increase productivity.

“Our mission has always been to help workers be happier at work,” Collin said. “The reason I worked on email is because it’s the main tool they use to get work done.”

The company now has more than 5,500 customers, up from 2,500 two years ago. Hoping to expand its marketing reach and product development, Front decided to approach entrepreneurs from companies who were partners or were focused on technologies related to the future of the work, Collin said.

“The way we use email for business has been stuck at a standstill for the last 20 years, while every other system and workflow has evolved and improved in time,” said Yuan, in a statement. “Mathilde and her team have built an exceptionally collaborative communications platform to bring work email into the 21st century. Front will play an important role in the future of work, and I’m excited to be a part of the journey.”