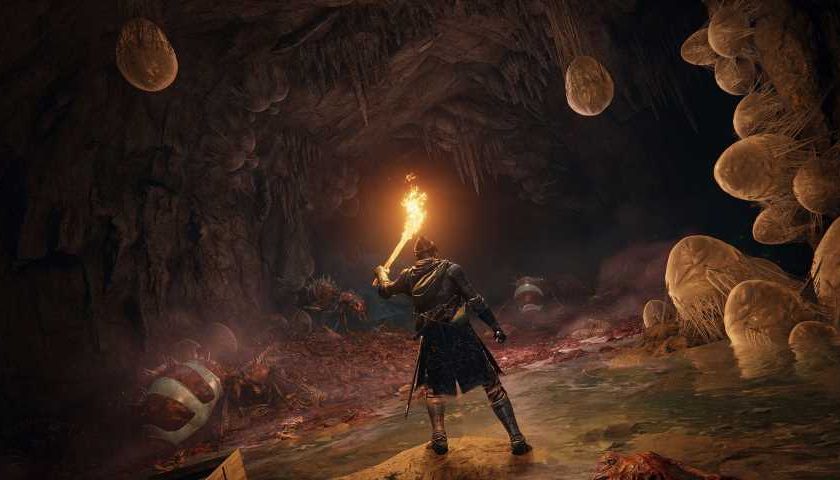 Black Knife Assassins are some of the toughest enemies you can face in Elden Ring, but even worse are the invisible variants found in Sage's Cave and Ordina's Evergaol. These bastards can only be seen when they're right up next to you, and by then it's often too late to prevent being stabbed in the gut.

You could carefully keep track of dust clouds and footprints in the snow to determine where the assassin will strike from, but a far easier strategy is to simply use the Sentry's Torch, which you can buy from a merchant for 7,000 runes. The Sentry's Torch reveals all invisible enemies (but not invisible doors), allowing you to easily spot the assassin as she circles around you.

The only downside to the Sentry’s Torch is that you have to hold it in your off-hand–or so we thought. Turns out that you can actually get all the benefits of Sentry’s Torch without even wielding it.

As noted by Reddit user Trve_Kvlt_Slam_Boi, two-handing a weapon while the Sentry's Torch is in your off-hand "sheaths" the torch, but still reveals invisible foes. This isn't particularly helpful for sword and shield builds, but for anyone who's already two-handing a greatsword (Bloodhound gang represent), this is a real game-changer. For new game plus, anyway.

Elden Ring fans might be interested to note that one of the game's tougher bosses might have started out as just a regular enemy. Depending on when you face him, Mohg can be a tough fight, but he would have been even tougher in Murkwater Catacombs or Raya Lucaria Academy. That's where a dataminer noted load list placeholders for Mohg alongside a model name "GreaterDemon," possibly indicating that the blood-feasting Omen started out as a non-boss or sub-boss enemy.