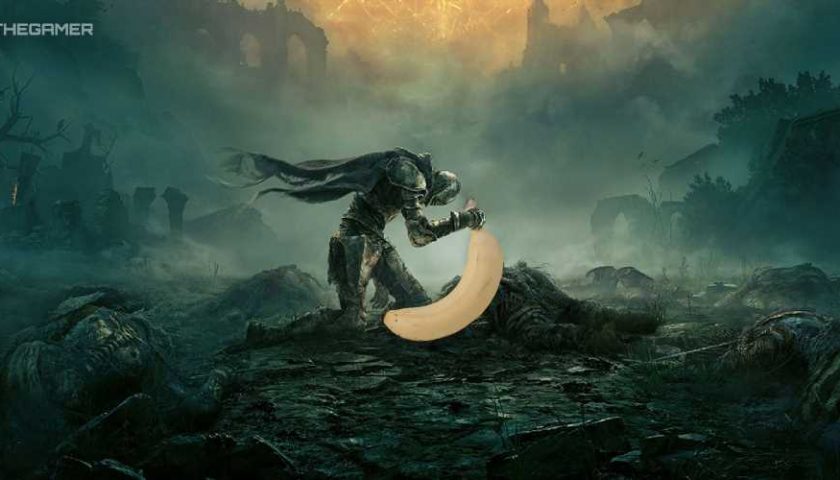 Almost two weeks after it launched, everyone is still talking about Elden Ring. The incredibly popular Souls game appears to have broken the cycle of everyone moving onto an entirely different new release with each passing week, a merry-go-round we've all been on since the arrival of Pokemon Legends: Arceus. Everyone peered out of The Lands Between over the weekend, looked at Gran Turismo 7, said “cool”, and then got right back to it.

Despite only having two weeks with Elden Ring, its more inventive players have already begun the inevitable chapter in which we will see weird, wonderful, and downright impressive things done in and with the game. Enter someone beating Elden Ring's first major boss with nothing but a bunch of bananas. Outside the game as a makeshift controller that is. This isn't a tutorial situation where you ran past a bunch of bananas at the start of the game without even noticing.

Quirky controller creator extraordinaire SuperLouis_64 is the person responsible for this potassium-rich feat. Ten bananas are wired up to a regular controller, each of them corresponding to a different command. The clip below shows SuperLouis beating Elden Ring's Godrick the Grafted, someone many of you have likely been obliterated by on account of tackling him too soon, while also demonstrating which bananas he is pressing throughout.

Godrick is eventually slain. If only there was a way to let him know he had fallen at the hands of someone wielding a bunch of bananas. Bananas aren't the first thing SuperLouis has used to beat an Elden Ring boss either. Less than a week after the game launched, the controller modder was using a Ring Con to bring down bad guys in The Lands Between.

SuperLouis's inventive work extends beyond Elden Ring alone. He has also crafted a Buster Sword controller you can actually use to play Final Fantasy 7 Remake, making your battles with Cloud feel a lot more real, although you might want to use it in a very big room should you try to recreate SuperLouis' work. As for Elden Ring, beating a boss with bananas isn't the only impressive feat pulled off in the game this week. Someone has already managed to beat the game without dying in two and a half hours. Roughly how long it takes most of us to create our characters.