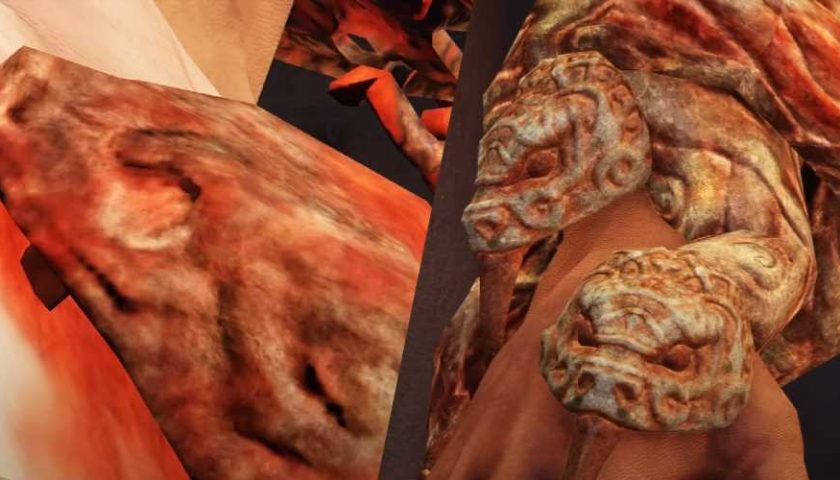 Elden Ring has a bunch of mini-bosses that usually lurk in the catacombs and dungeons. One of these is the duelist, a gladiator-like brute with snake-themed armour that guards Erdtree burial sites. And as it turns out, their armour doesn't really protect them – it's more of a punishment, constantly gnawing at their flesh.

They were once champions of an arena, likely the cut colosseum that they would have originally been found in, but now they serve as grave wardens. Given that, in our own history, gladiators were often prisoners forced to fight for our entertainment, it's possible the same goes for duelists, which would explain the armour. It also explains why they use snake imagery despite guarding the erdtree as snakes are the symbol of traitors.

"They still wear their gladiatorial equipment, adorned with bronze effigies in the likeness of snakes", Zullie the Witch wrote. "Interestingly, these effigies aren't just decorative, they seem to be secured to the Duelist's body, biting into their flesh."

Aside from the snake-themed armour, duelists also have a living snake that grows from their arm to grab you in one of their attacks. All of this ties them to other 'traitors' we find throughout Elden Ring such as many of the denizens of the Volcano Manor. After all, serpents are the major icon of the anti-Erdtree-stablishment in Elden Ring.

But Zullie goes a step further in their video to highlight where we would have originally fought the duelists. While we know they are gladiator outcasts, it turns out that the recently discovered cut colosseum would have originally featured them and other mini-bosses in gladiatorial fights. We knew it had interior designs to explore, but this hints at more PvE content as opposed to simply PvP as previously speculated.

"The Leyndell colosseum has spawnpoints for a Duelist and a Lion Guardian at either end of its arena", Zullie wrote. "So with the colosseums being closed off, they made use of the Duelists everywhere, adding to the regular enemy roster."