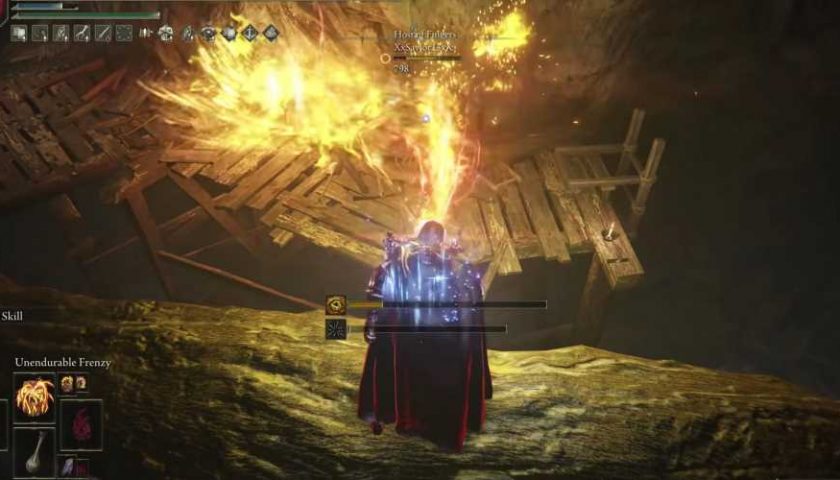 Elden Ring is already hard enough without the threat of random invasions from other players, but now it seems like it’s about to get a lot harder. One Elden Ring PvPer has discovered a build that turns them from a squishy little knight with a sword into an unstoppable killing machine with flames firing from their eyeholes.

YouTuber Adam Barker, who makes a lot of Souls game content it seems (thanks, Eurogamer), posted this video outlining the steps taken to become this unstoppable PvP menace.

Step one, use the Ironjar Aromatic consumable to boost your resistances and damage negation. It does make you slower and vulnerable to lightning, but never mind that for now. Step two is throwing the Cerulean Hidden Tear and Crimsonwhorl Bubbletear into the Flask of Wondrous Physick to give yourself free FP and convert all damage to HP, respectively. This lasts for just 15 seconds, but with the proper timing, 15 seconds will be more than enough.

The final ingredient in this recipe for mayhem is Unendurable Frenzy, an incantation that causes you to shoot yellow flames from your face. It fires out a fairly wide spread, and although its range is limited, catching Tarnished in a dungeon usually limits their ability to flee.

As you can see in Adam’s video, the idea is to quickly down these ingredients and start the Frenzy incantation just before you come into view of the opposing party. Then, just walk around until they all burn to death. Simple, really.

It should be noted that Barker isn’t entirely impervious to damage while in this state, and missing the proper timing can result in a very short invasion. Barker himself dies from repeated cannon fire in the latter part of the video, but before then, he’s an unstoppable killing machine.

In other Elden Ring news, dataminers have found evidence of a cut bestiary that might have been in the pre-release version of Elden Ring, and may yet make a return. Also, speedrunners have gotten Elden Ring down below 20 minutes, which seems absolutely impossible.