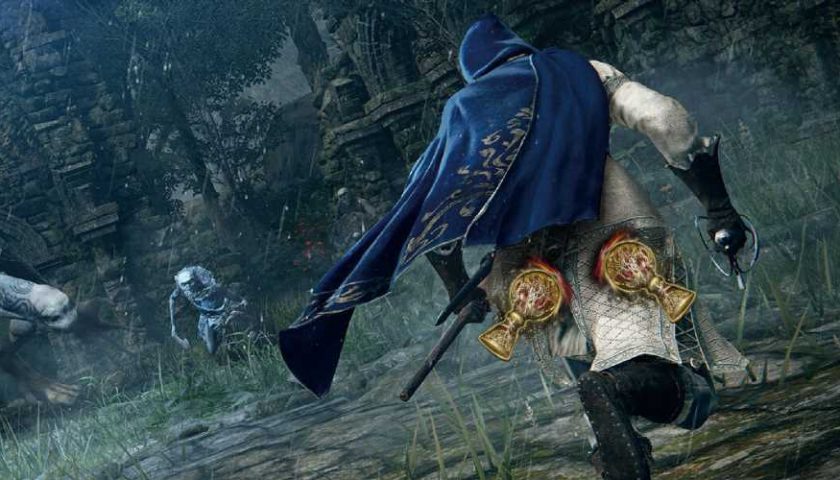 Elden Ring now has an official manga but it's not a serious fantasy epic but rather a comedy about a lowly Tarnished who keeps getting wailed on at every turn. So it's pretty much the player's experience put to paper. And inside, fans are uncovering all sorts of (definitely canon) discoveries, such as where the Tarnished keeps their flasks.

You might have noticed that the Tarnished doesn't have too many pockets or any bags, but they have an awful lot of luggage. Your inventory is stacked and unlimited, filled with poison remedies, healing items, spirits, scrolls, weapons, and healing flasks. As it turns out, those healing flasks are kept in a very safe space – the butt. Not in the butt, not a belt attached to the butt, not a fanny pack using strictly the American definition, but stuck to the butt cheeks like suction cups.

"Someone had some fun," the Tarnished says. "Who did this while I was passed out!? Sticking bottles to my ass…!! They're on there pretty good too! I can't yank 'em off… What is this, cupping therapy?"

The manga also reveals some fun little details like Rykard being blonde, while it also gives the Tarnished an official name – Asebito. Essentially, Japanese for Tarnished, or "Faded Person". Ase also means sweat, so it's likely a pun, with Melina calling the Tarnished a sweaty dude.

The healing flasks might even explain some of the clunkier sounds we hear when rolling. No, it's obviously not the weight of your armour and all the dangling belts and loose fabric – it's the flasks. In the manga, the Tarnished squats down, "I just wanna go home already… Aw, man… I am so lost…"

But when they do, the two flasks clink with the floor. So next time you're playing Elden Ring, you can thank the manga for showing us where we pull our flasks from, and that noise that plays when we roll. That noise that is definitely not our armour.