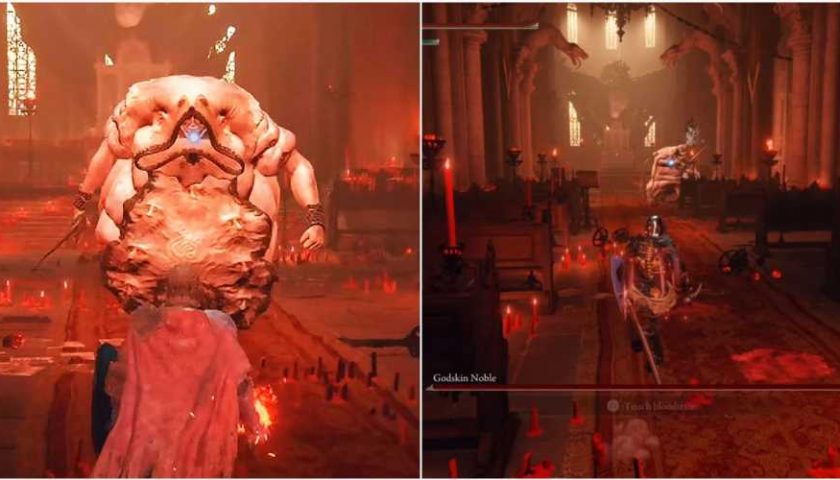 Godskin Noble is one of the recurring bosses in Elden Ring. The boss makes his first appearance inside the Legacy Dungeon Volcano Manor, located on the west side of Atlas Plateau. The boss fight is optional and does not affect the story in any way. However, if you want to face Shardbearer Rykard, Lord of Blasphemy inside the Legacy Dungeon, you will have to defeat this enemy.

Godskin Noble makes more appearances in the game in different areas, even as a duo fight in Crumbling Farum Azula. Here is all you need to know about this boss. 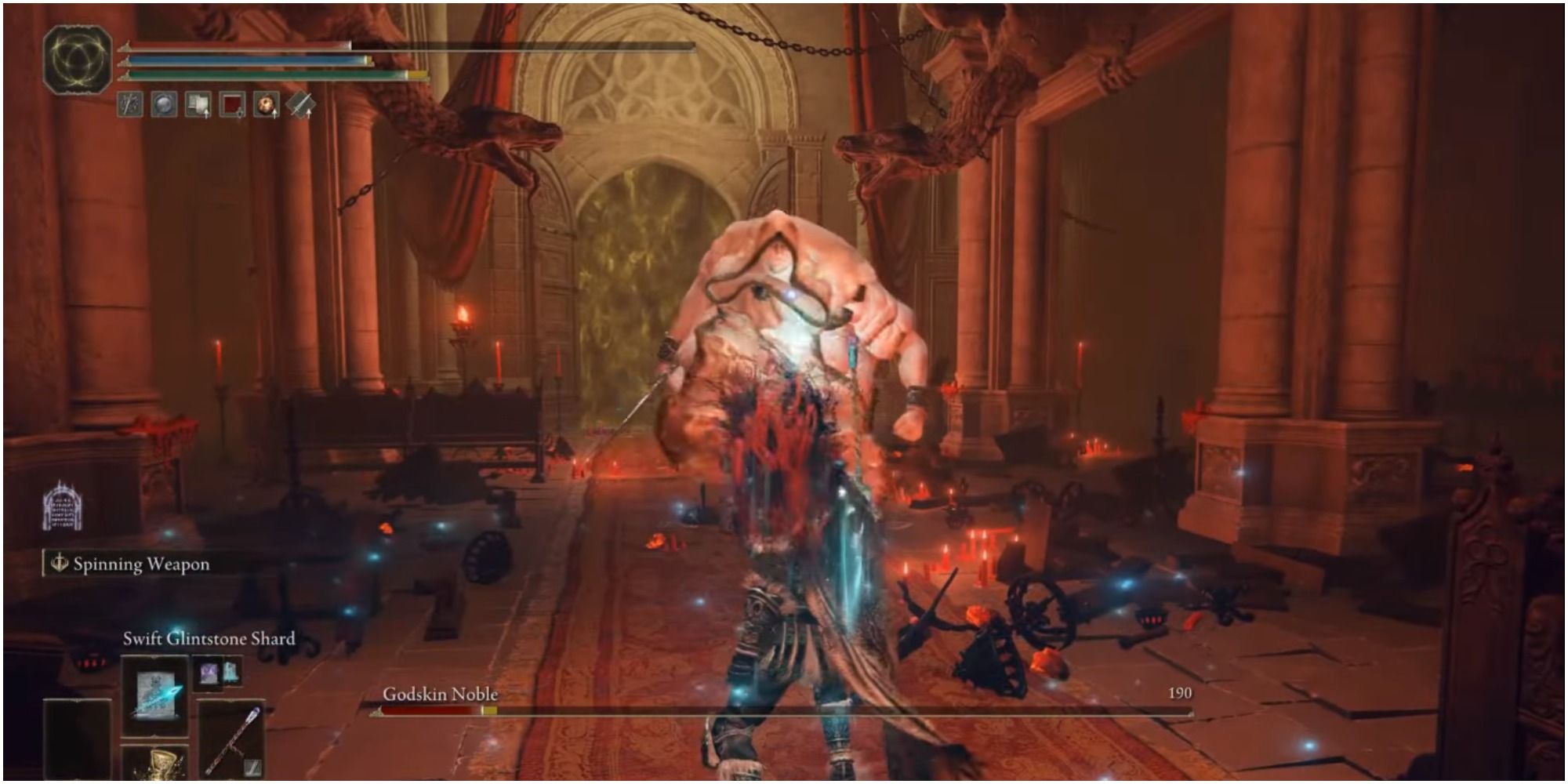 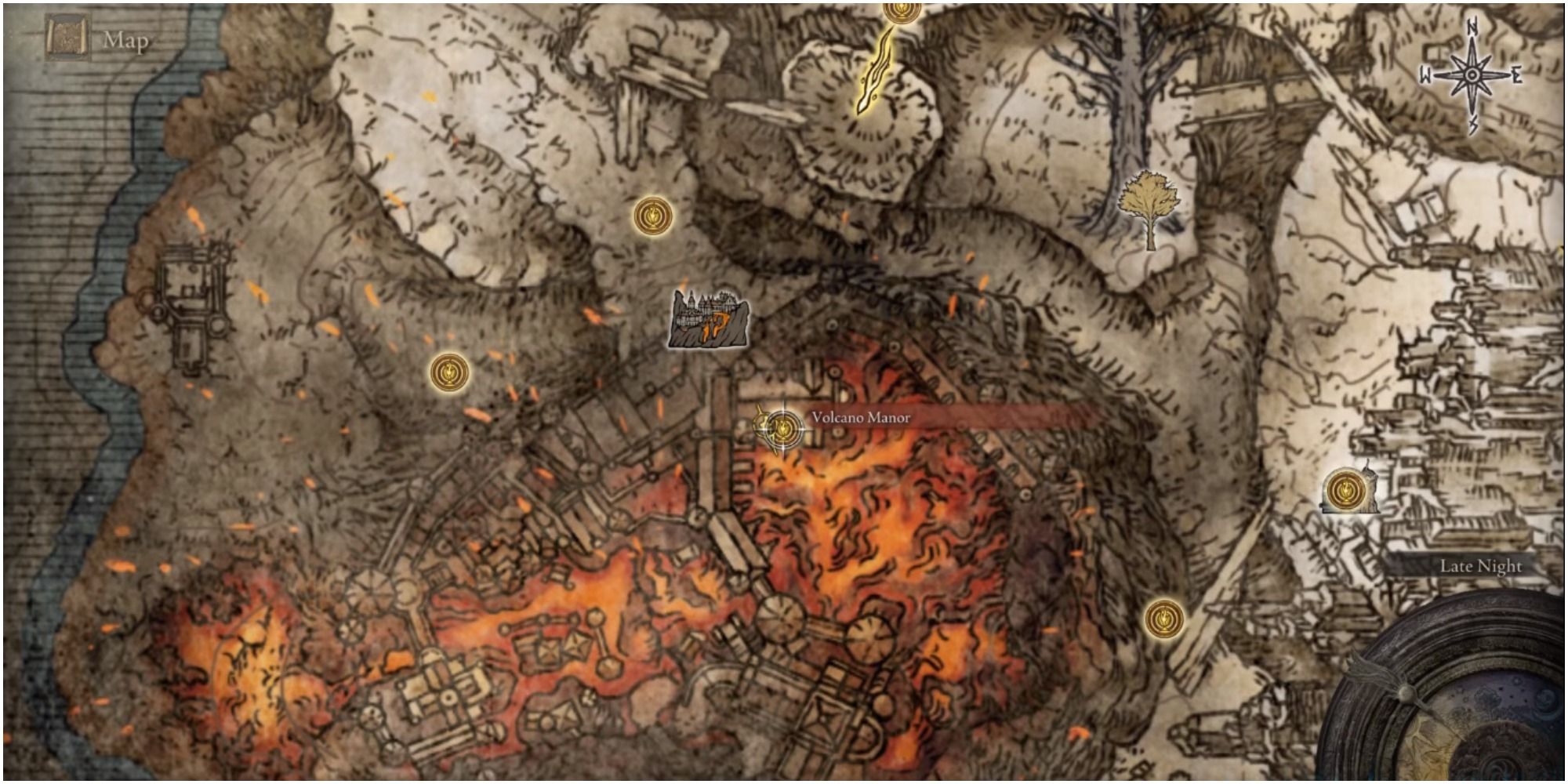 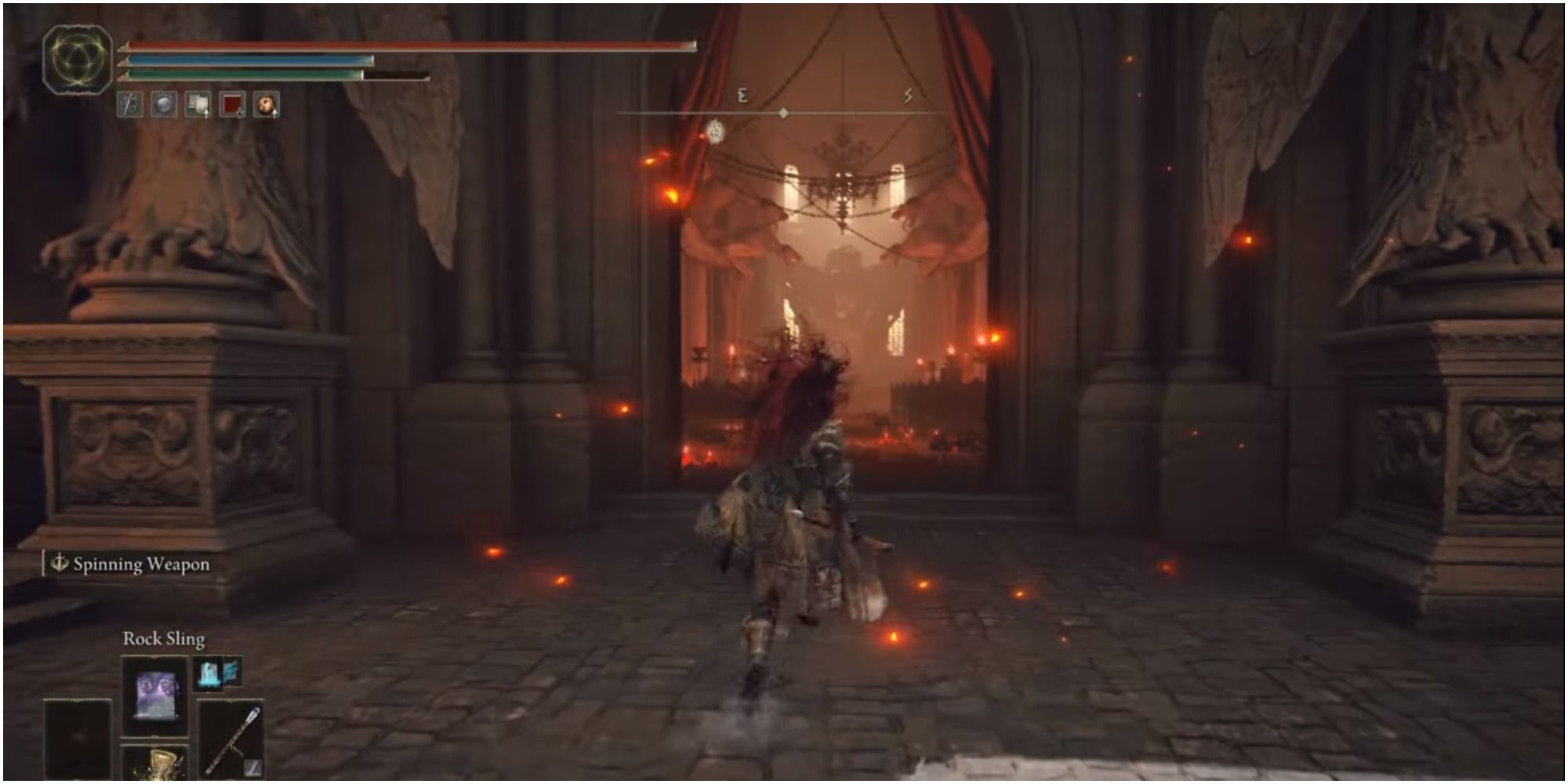 Godskin Noble is located inside the Temple of Eiglay in the Volcano Manor. The boss fight is optional unless you want to take on Shardbearer Rykard.

You can summon any Spirit Ash or online players to help you in this fight. Defeating him on different encounters will grant you his armor set, his weapon, and a Talisman.

The boss' poise can be broken if you perform a number of jumping heavy attacks. This will lead to a free critical hit on the boss for more damage. 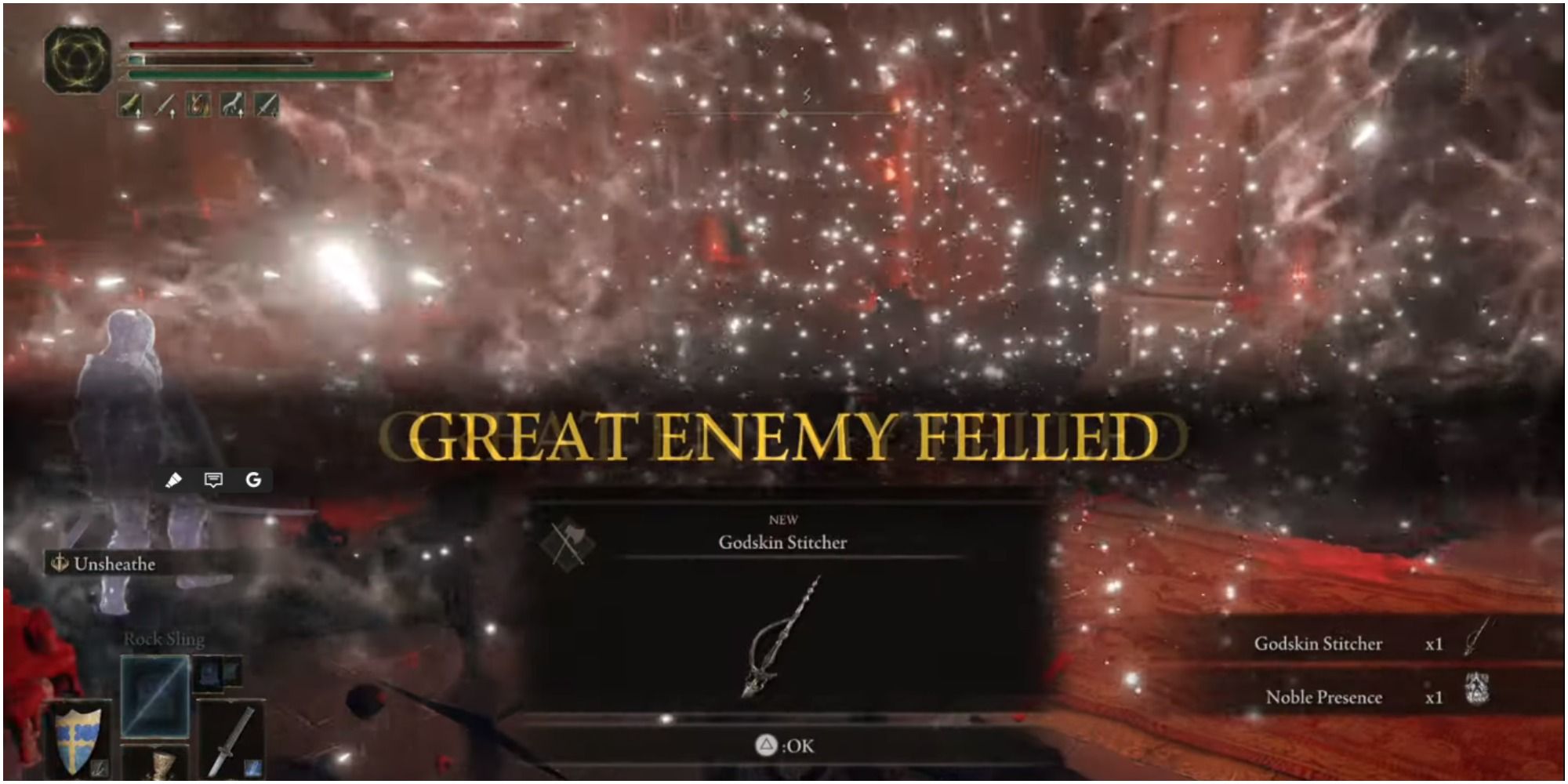 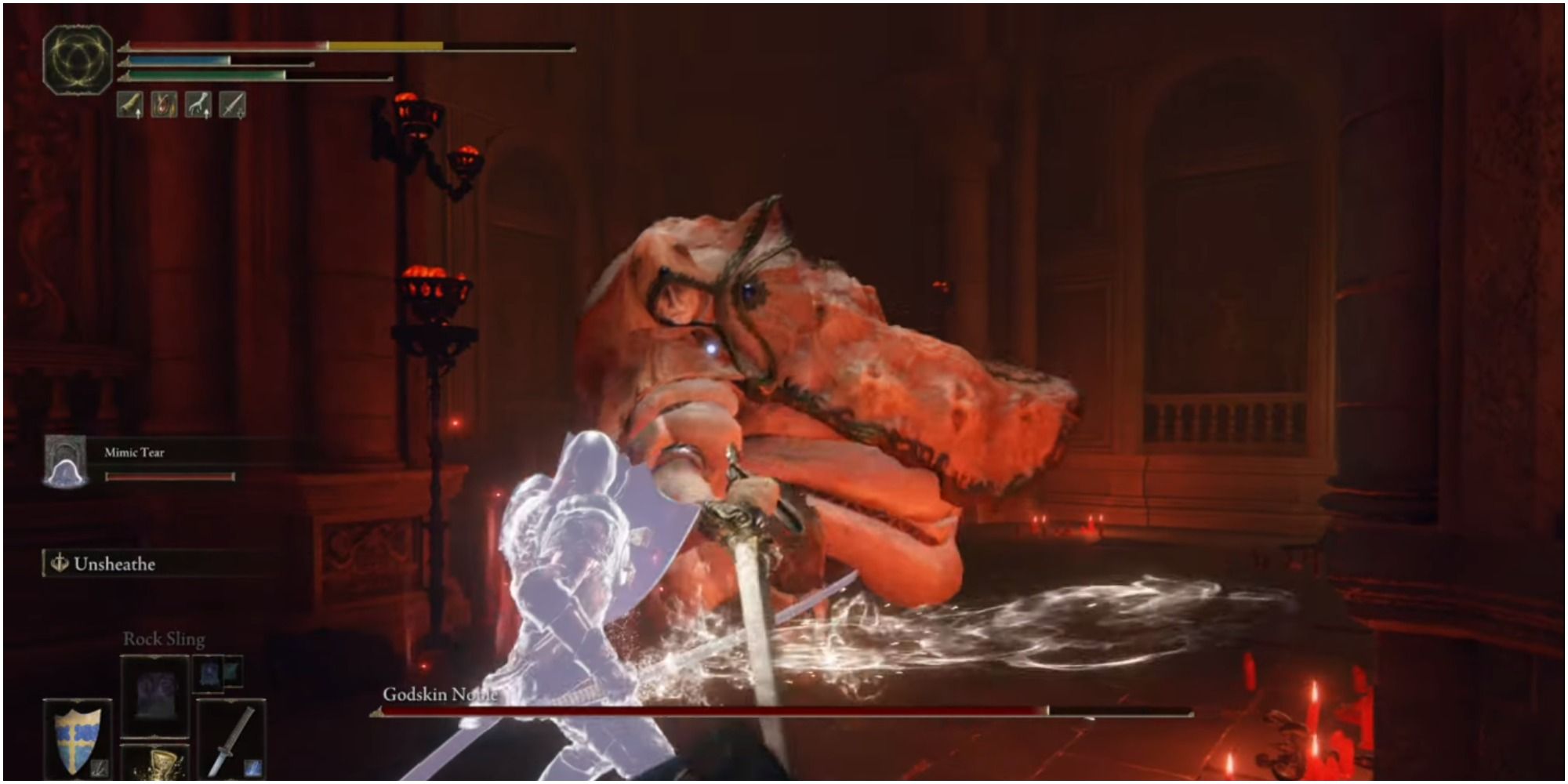 Despite being a big boss, he can move around fast and attack you, leaving you in shock. Some of his attacks need precise timings to dodge in order to avoid taking any damage. Following are all the attacks the boss uses inside the Temple of Eiglay: 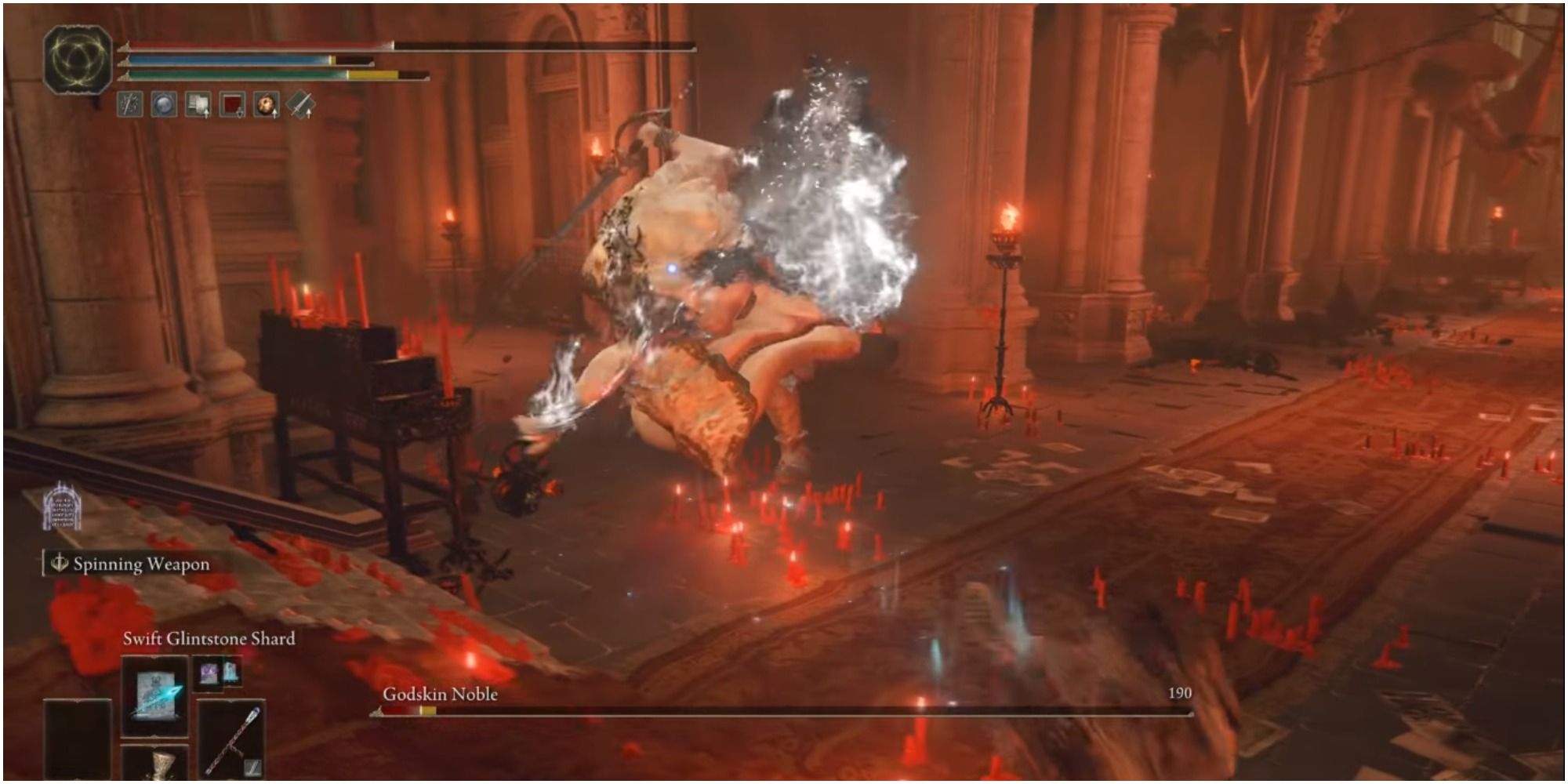 The boss raises his left hand and conjures a black flame that he throws at you. The flame has a fast travel speed and deals damage over time for a little while. 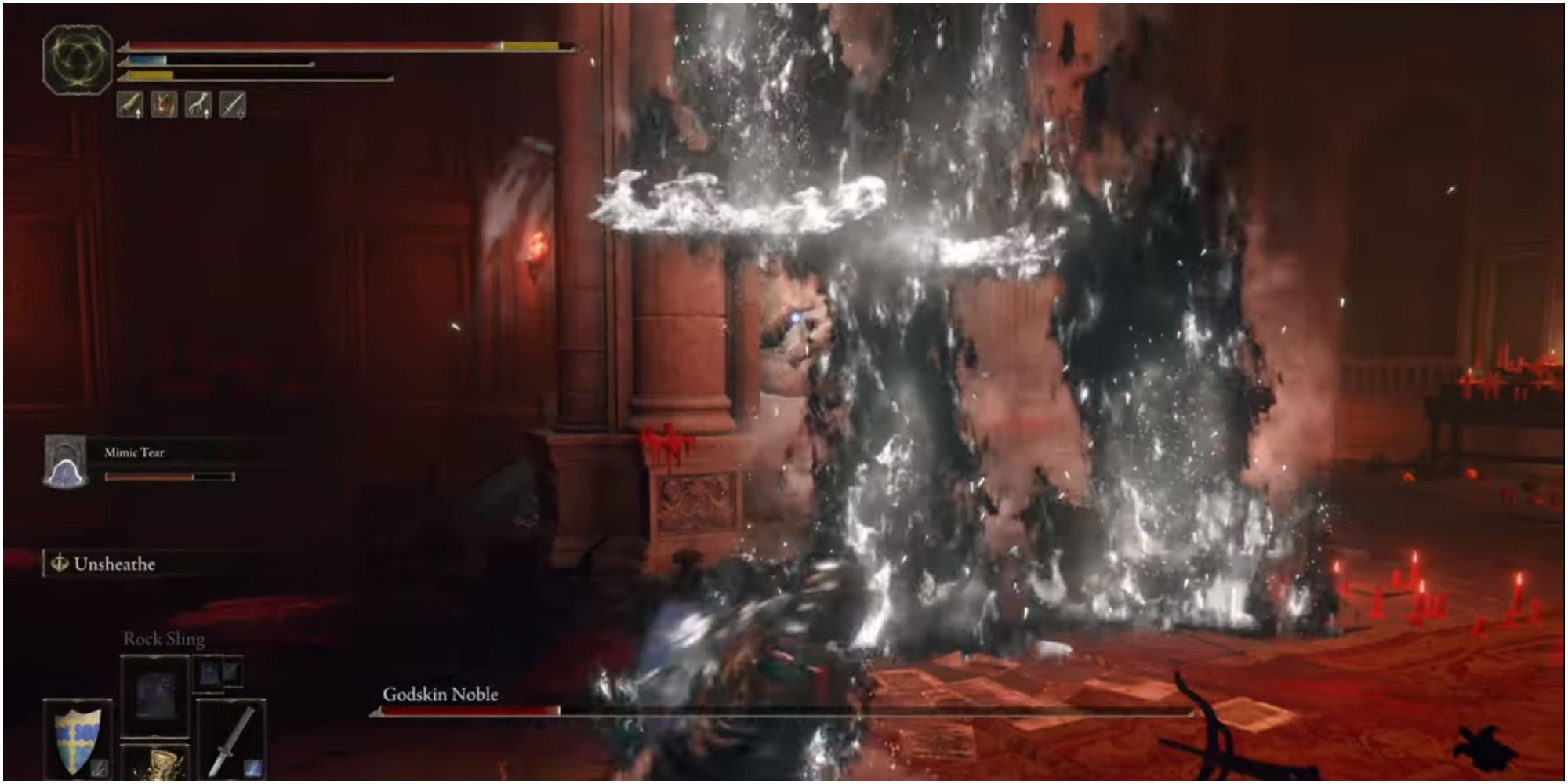 Godskin Noble conjures pillars of black flame around him that persist for a small duration before burning out.

Counter: Dodge back or run away when the boss lowers his hand, conjuring flames. 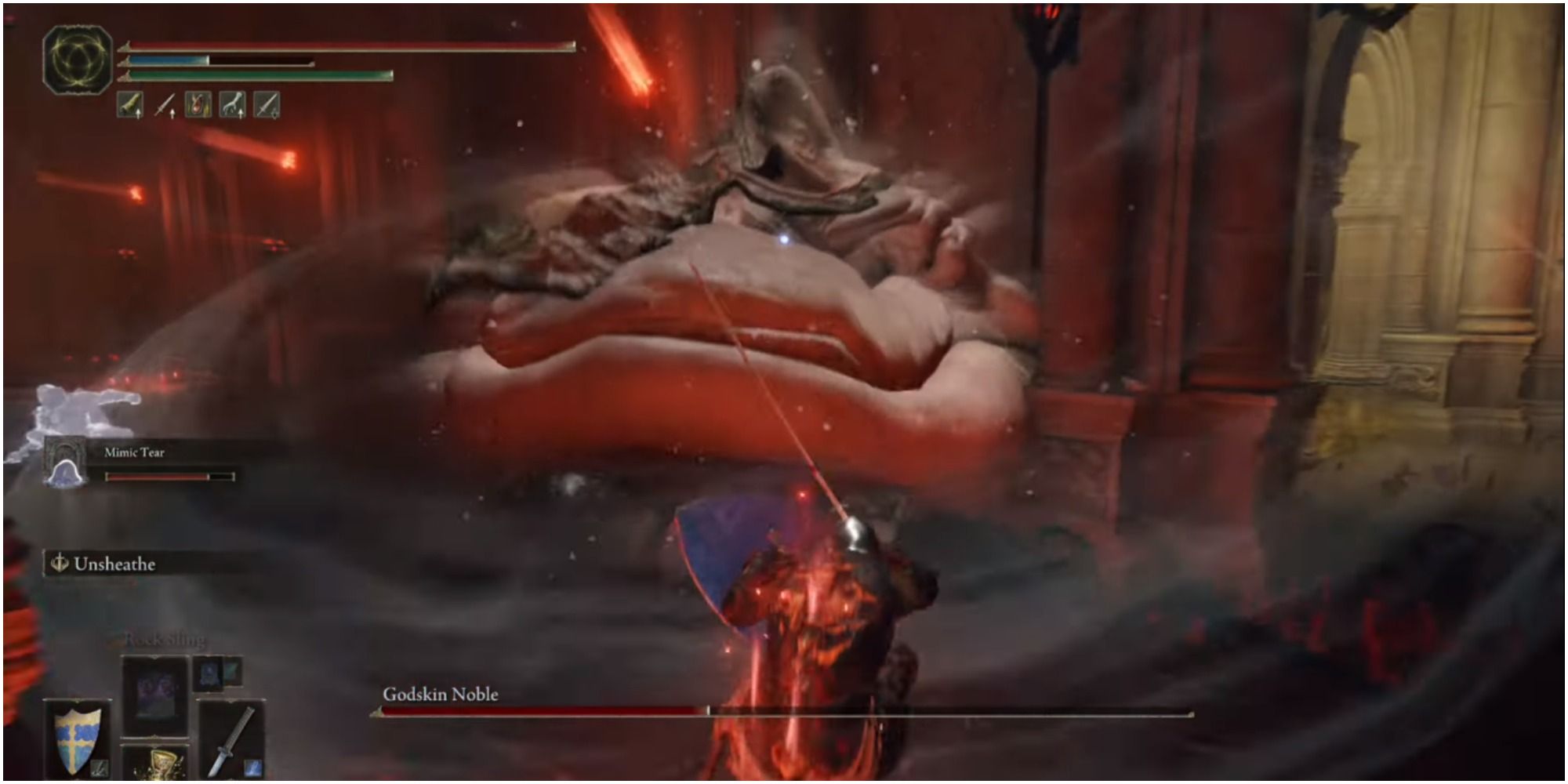 The boss shoves his belly onto the player, staggering if hit. 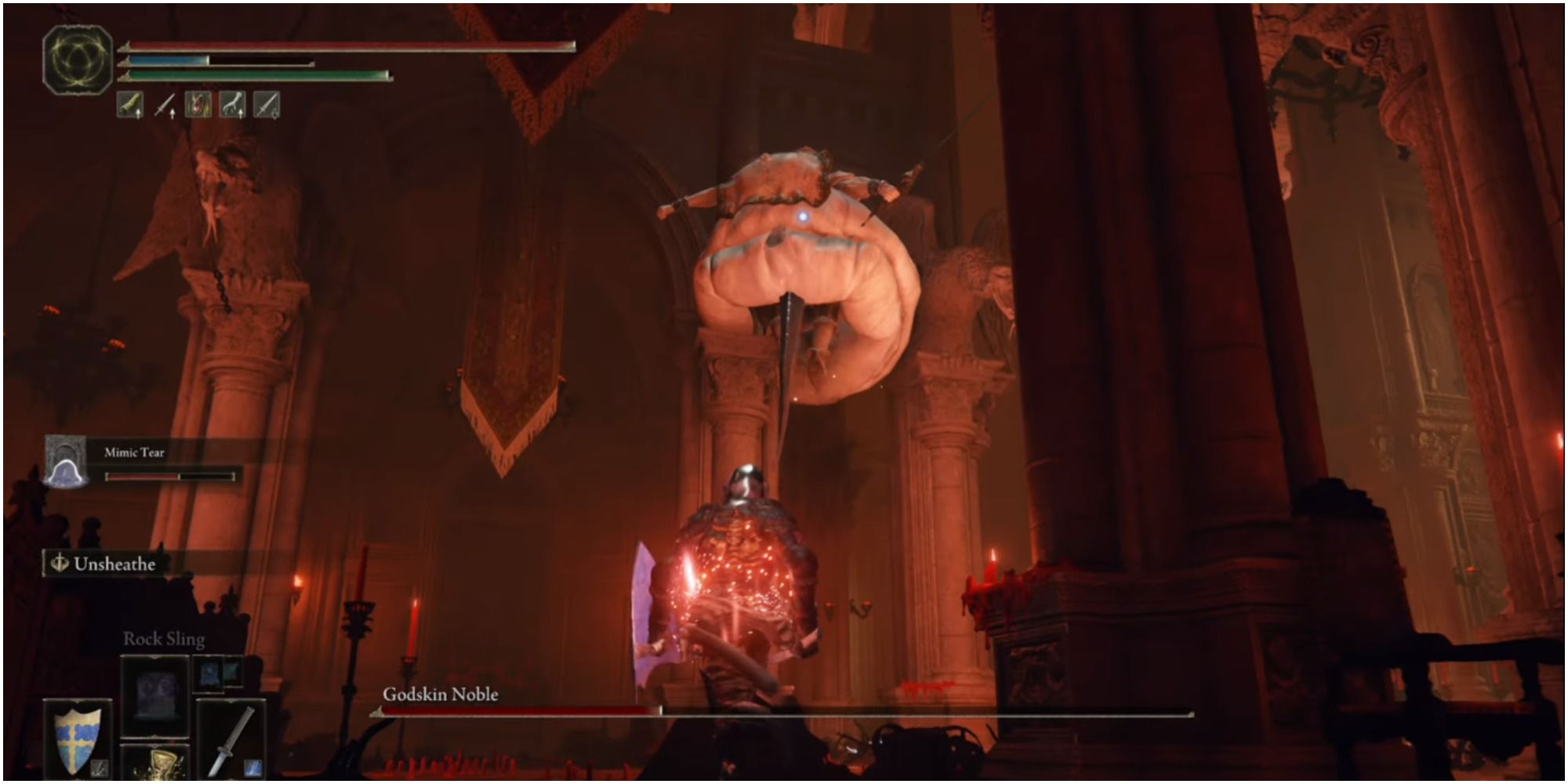 Godskin Noble leaps into the air and then slams down on the ground dealing serious damage on hit.

Counter: You need to back away from the boss when you see him leap into the air. 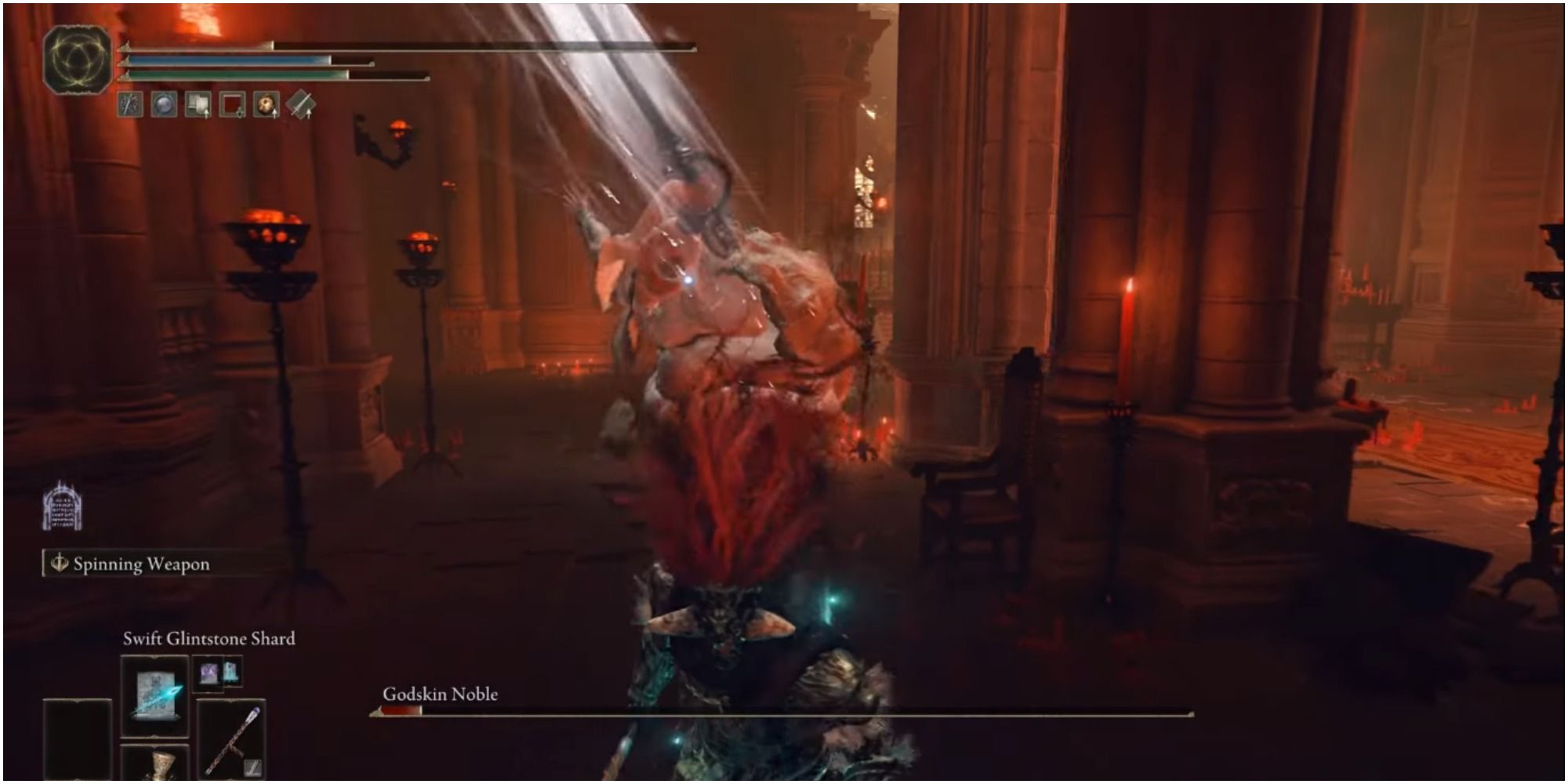 The boss repeatedly thrusts his heavy sword consecutively at the player.

Counter: You need to keep dodging to one side until the animation is over.

Godskin Noble stabs the player then does an overhead strike or a backhand attack.

Counter: You can dodge the stab and the follow-up attack by dodging to your right. 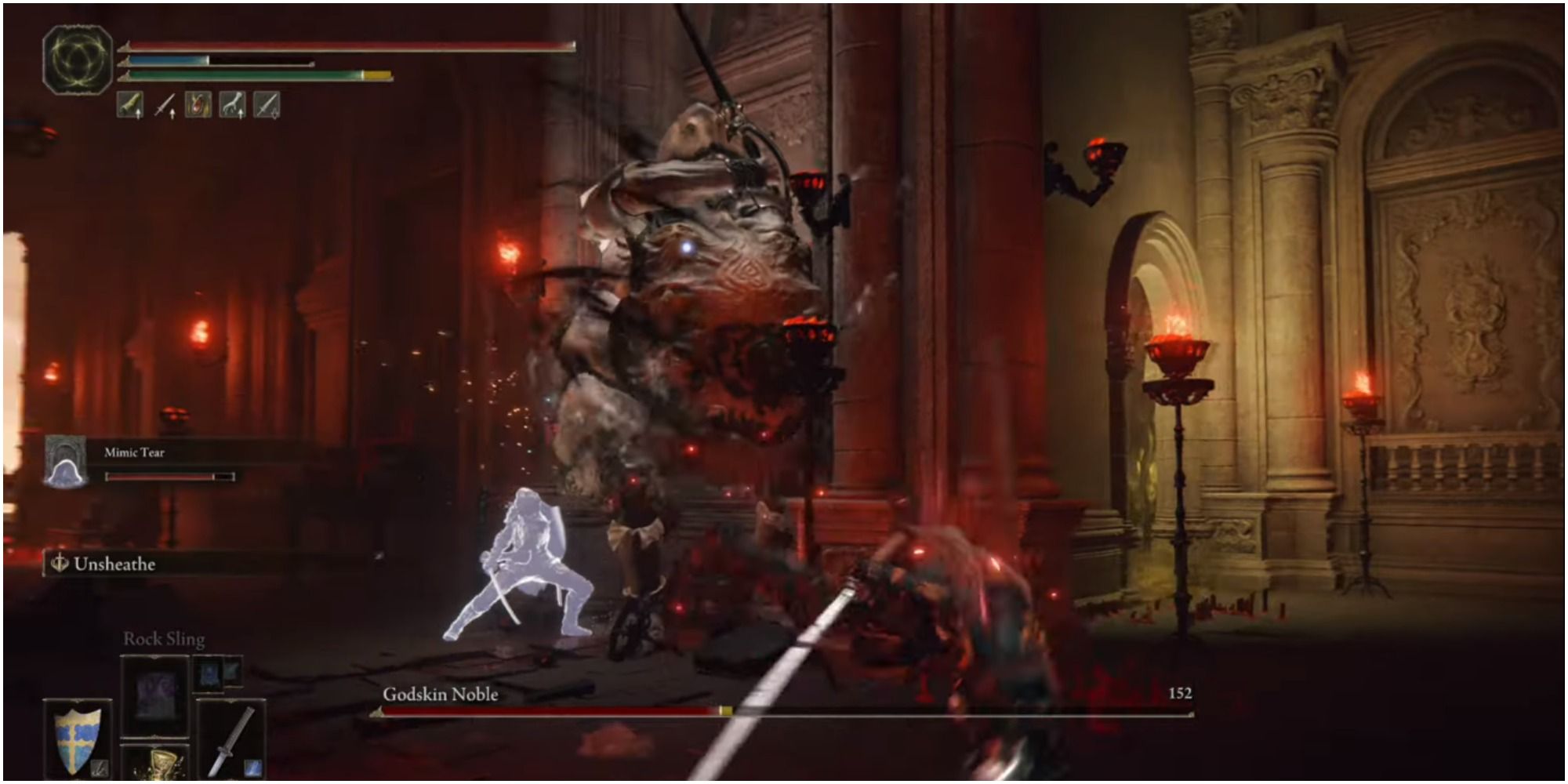 Around 60 percent health, the boss starts to slowly float above the ground and causes the black flame to circulate around him. Then he emits a small shockwave around him to push back the player. He gains a few new attacks in the second phase.

Counter: Get a few hits in before he does the shockwave. 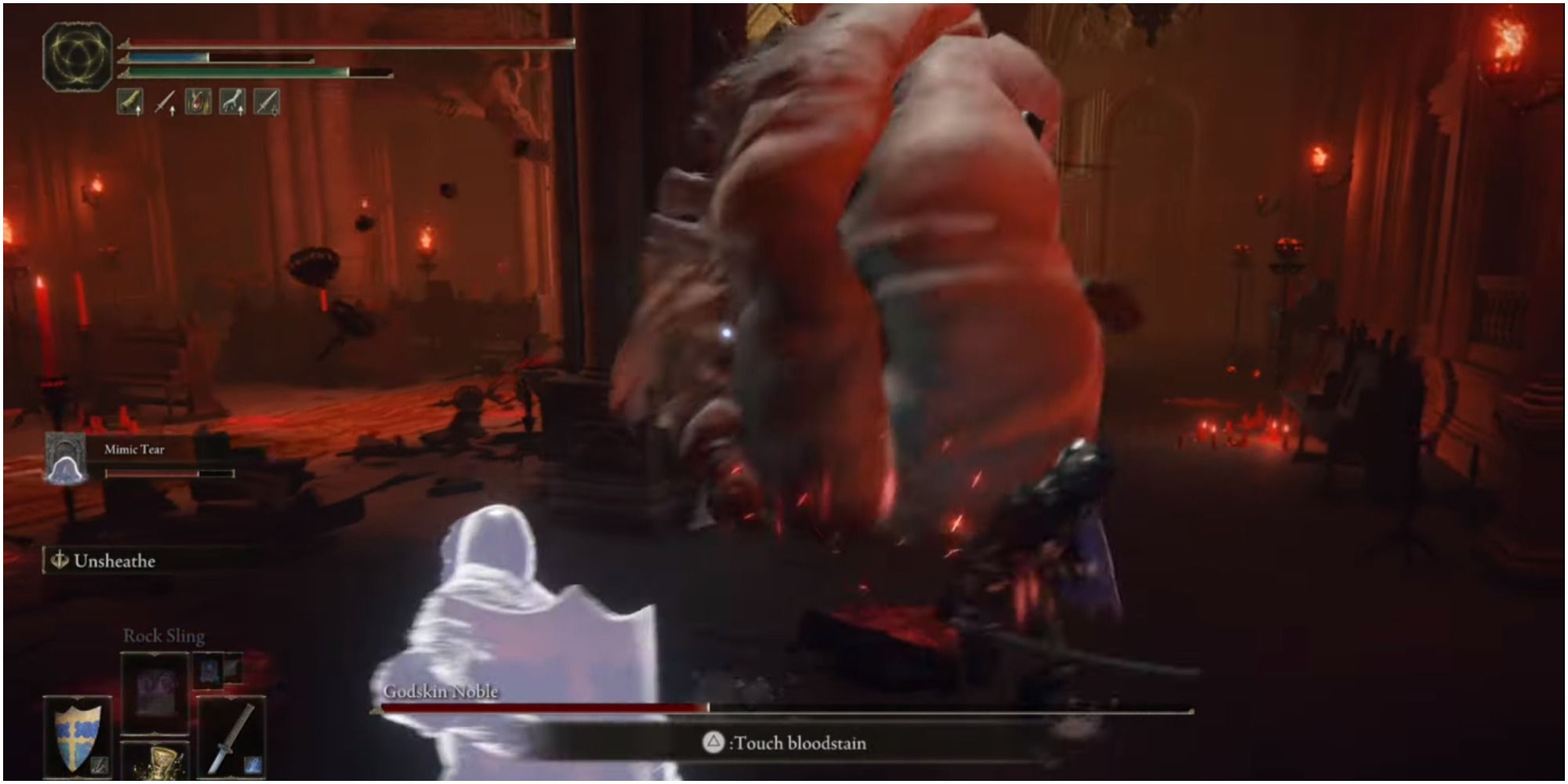 The boss bloats up his belly and starts to roll on his side like a wheel trying to attack you twice.

Counter: You can either get behind a pillar until the animation ends or run to the side before he starts rolling. 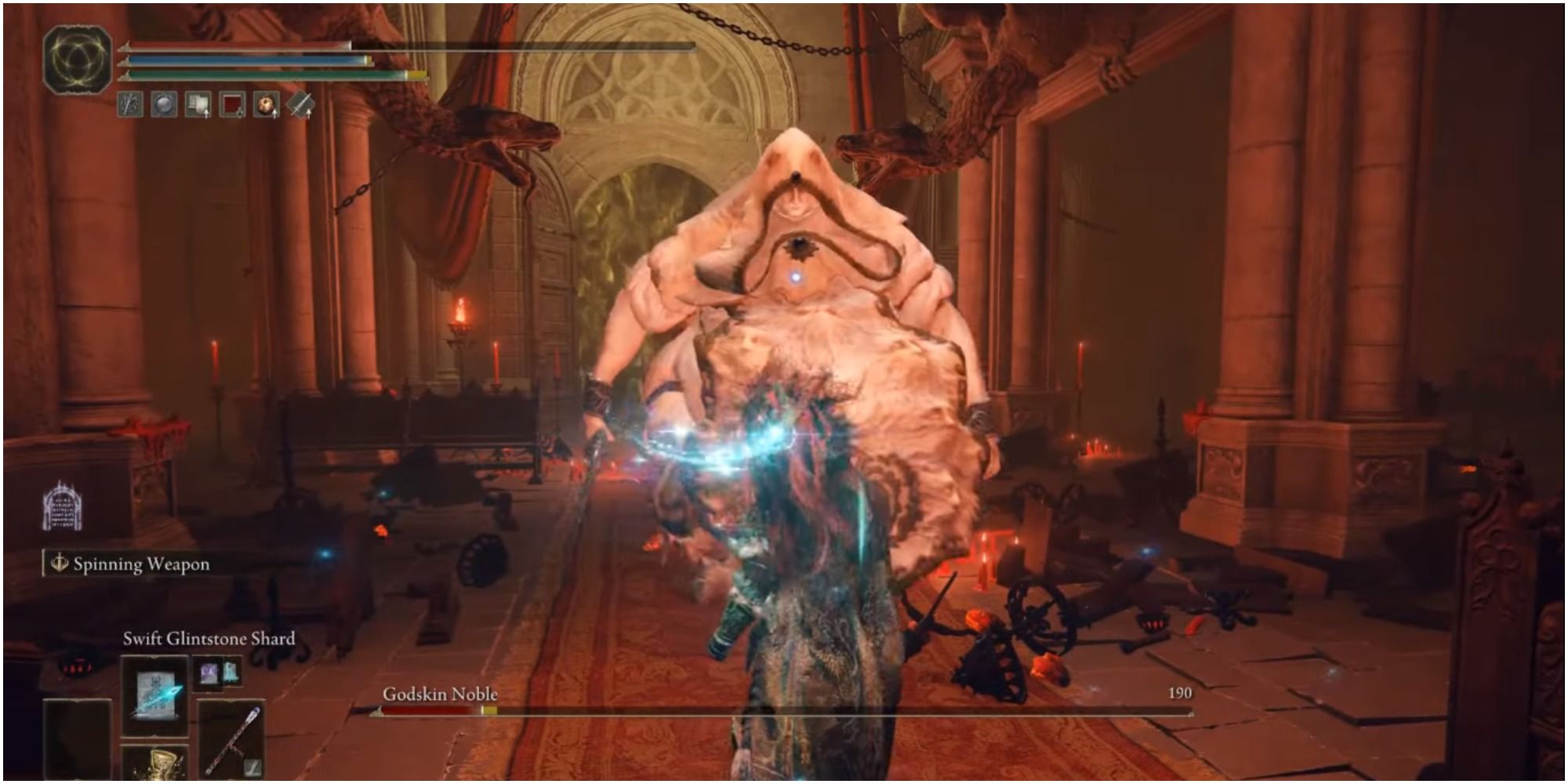 There are two main strategies for this fight: you can either stick to his right side and hit his belly, or you can beam him to death. 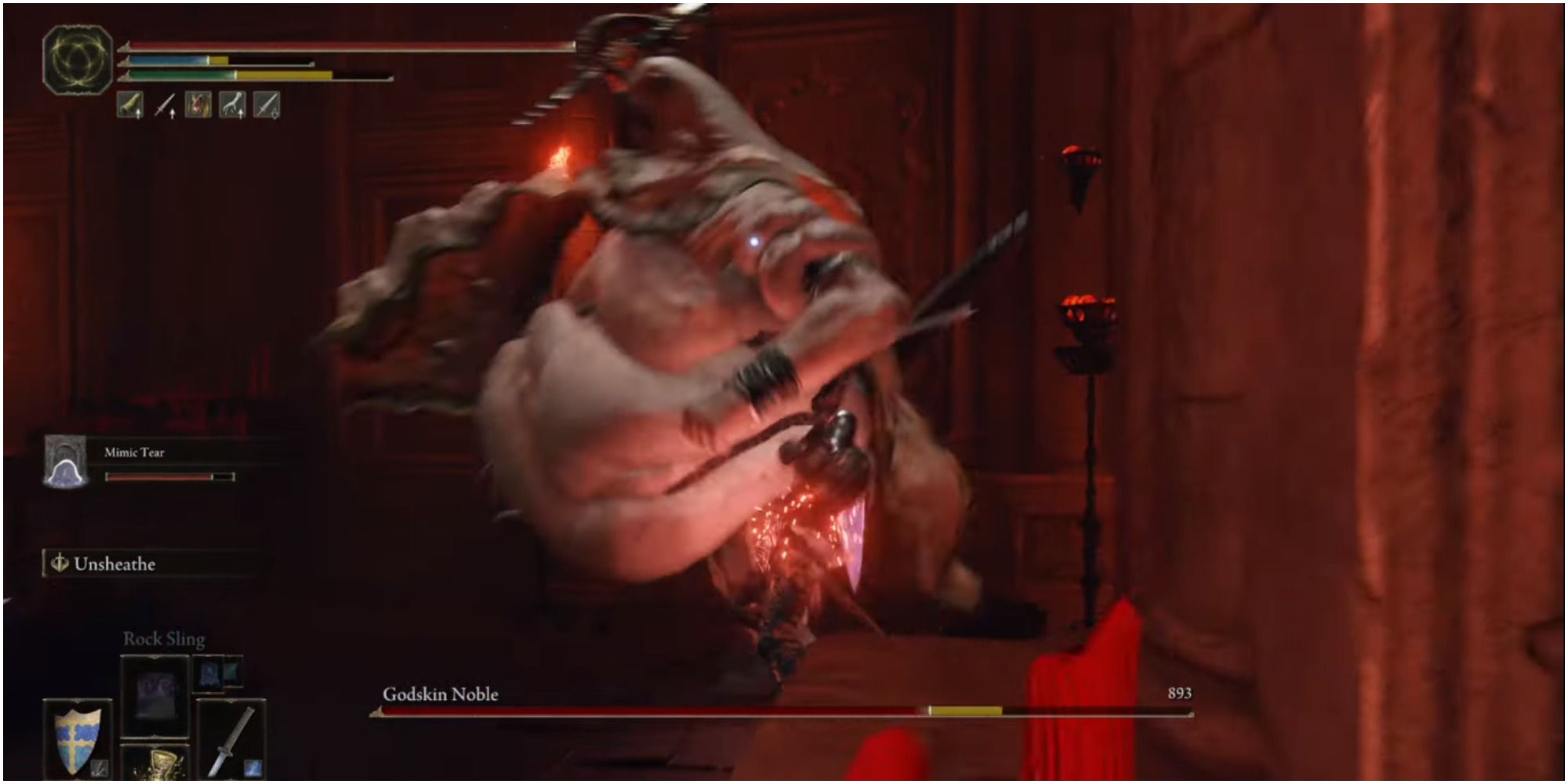 The melee strategy is quite simple, as you only need to get used to his stab attacks. The only attack to look out for is the Belly Shove and Body Slam. Even if you are close to the boss, you need to get out when Godskin Noble does these attacks. The boss usually follows up his attacks with the next ones pretty quick, so you always need to be focused.

After every attack, you will get the chance to hit the boss for either one or two guaranteed hits. Do not hit more than that, or you will get severely punished for being greedy.

Summoning an online player will raise the boss' health, but it will also let you take him down faster. 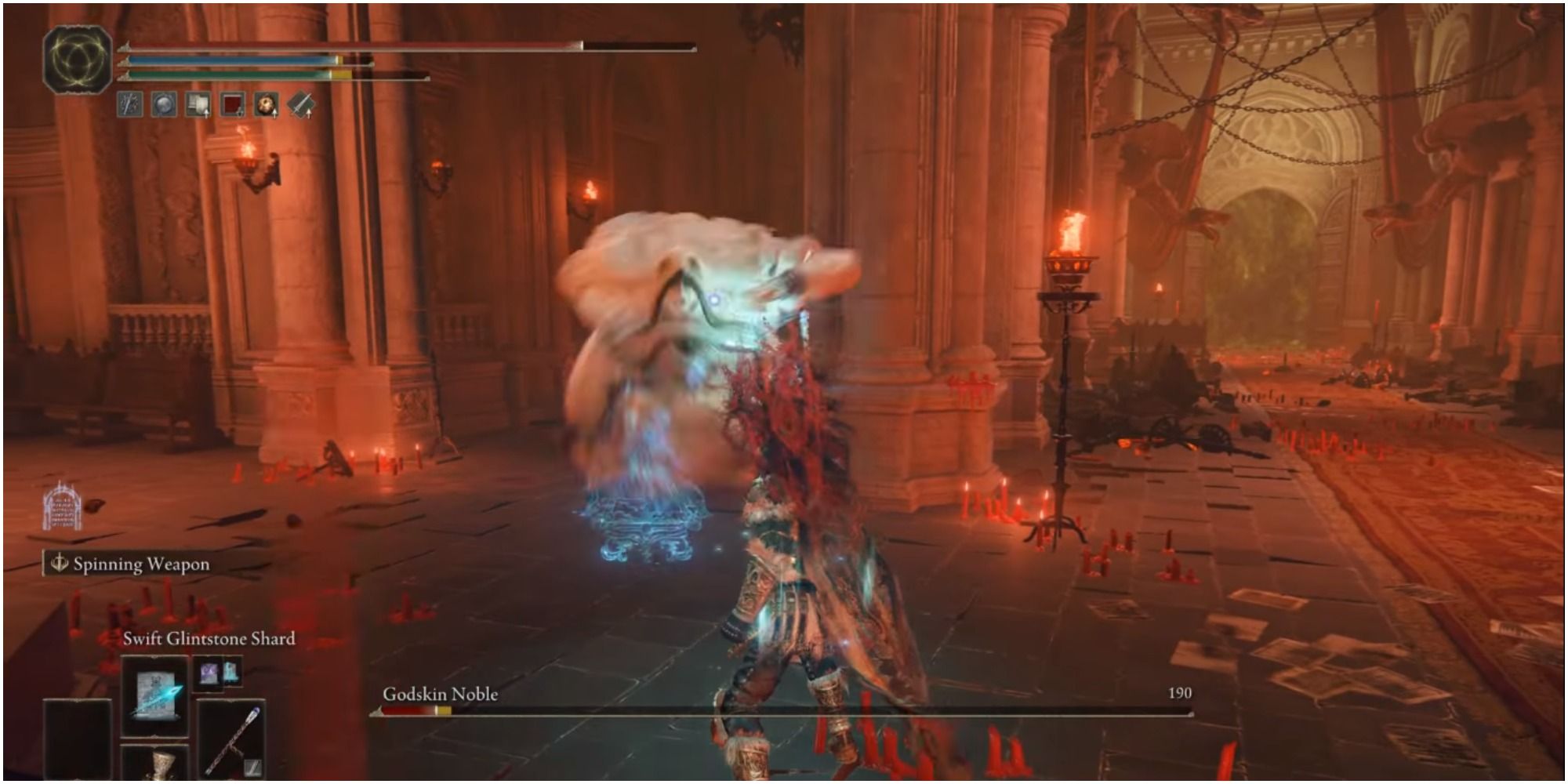 For the ranged strategy, if you are having a lot of difficulties, you can go for the Sorcery Beam one shot as a last resort. To use this, you need to add the Cerulean Hidden Tear in your Wondrous Flask. This will let you use Comet Azur for more than ten seconds. As the boss starts to walk towards you at the start of the fight, you have enough time to cast your Sorcery and keep hitting him till he comes over to you and attacks you interrupting your attack.

Summoning a Spirit Ash like Mimic Tear can help you prolong the duration of your spell if your copy goes aggressive for a couple of seconds.