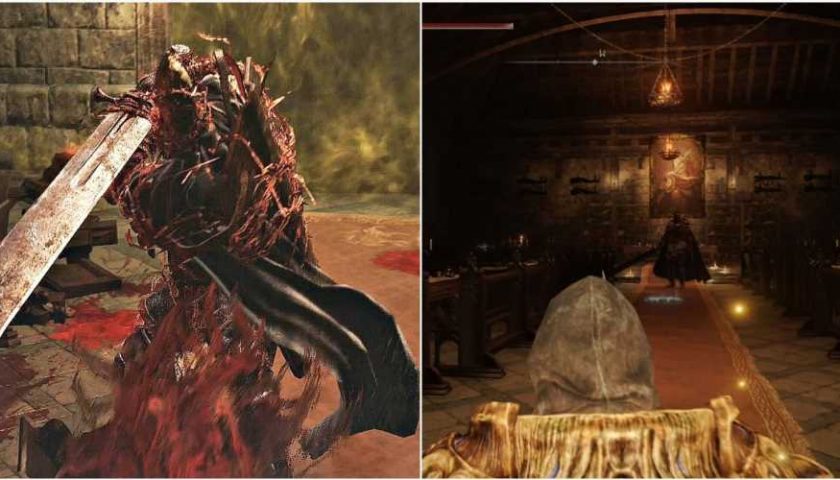 Elden Ring is the latest FromSoftware's action RPG game that has been getting constant praise throughout the gaming community. The game brings on a new look to open-world games and has an engaging combat system. Throughout your journey in the Lands Between, you will come across a vast number of bosses. Elemer of the Briar is a recurring boss that appears in Shaded Castle. You will find weaker versions of him labeled as Bell-Bearing Hunter near Shacks at nighttime.

Elemer Of The Briar Overview 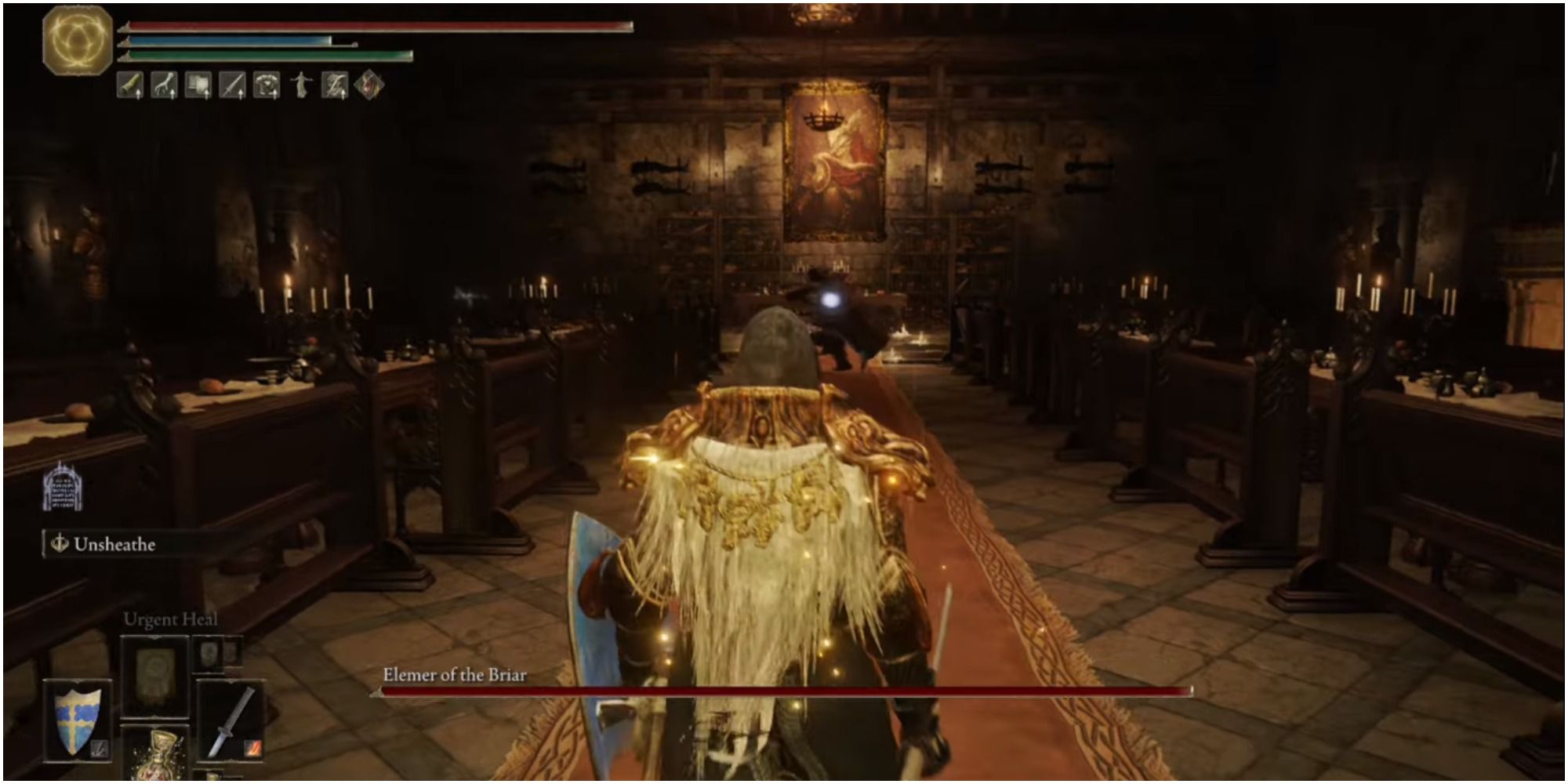 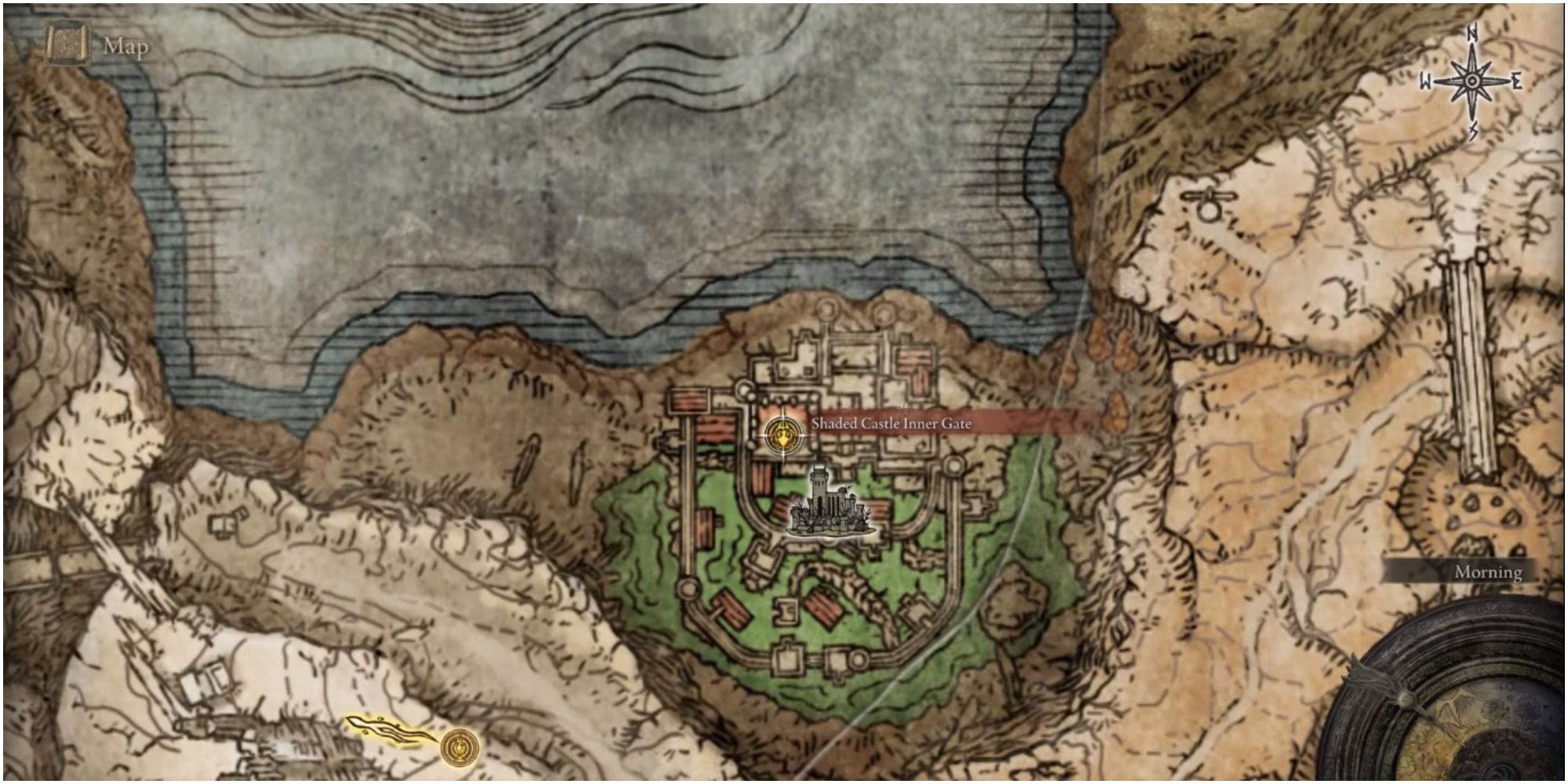 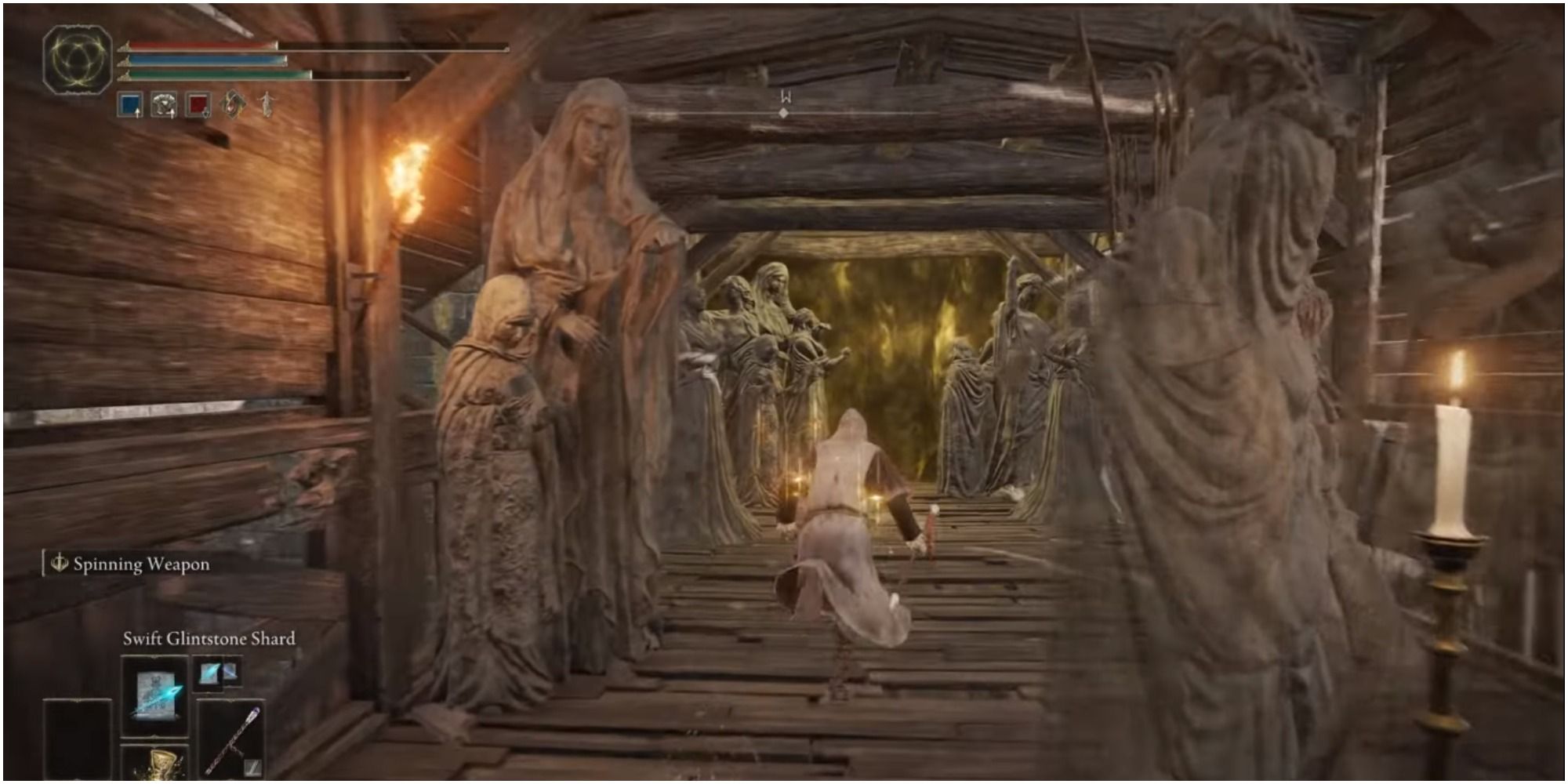 Elemer of the Briar is located in The Shaded Castle, which is north of Atlas Plateau. The fight and the area are entirely optional and do not affect the story whatsoever.

You can spawn any Spirit Ash for this fight, or you can summon online players. Defeating the boss will drop the Marais Executioner's Sword, which has a unique Skill attack.

Defeating weaker versions of the boss found at nighttime at Shacks will reward you with different kinds of bell-bearings. 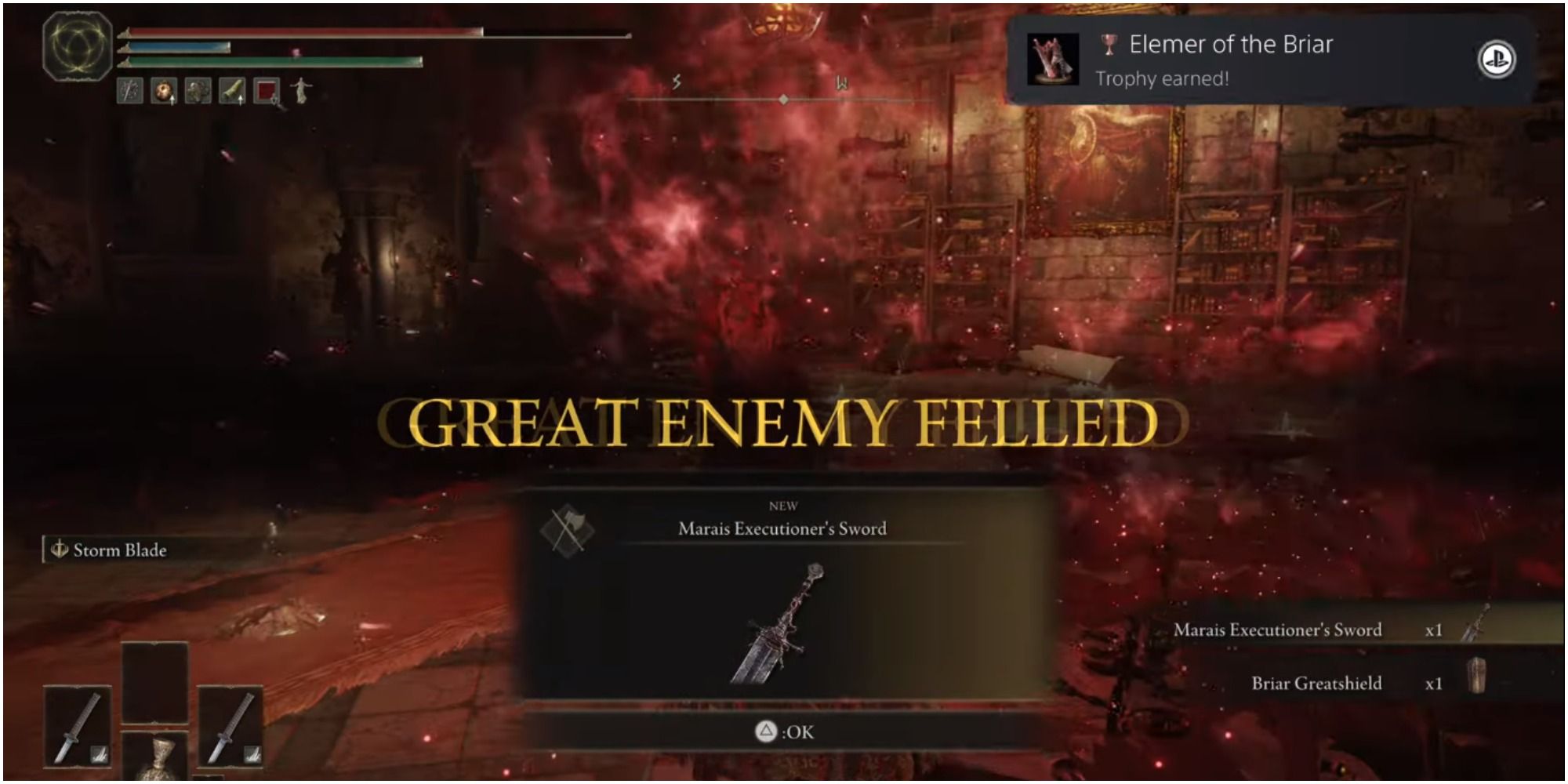 Elemer Of The Briar Attacks 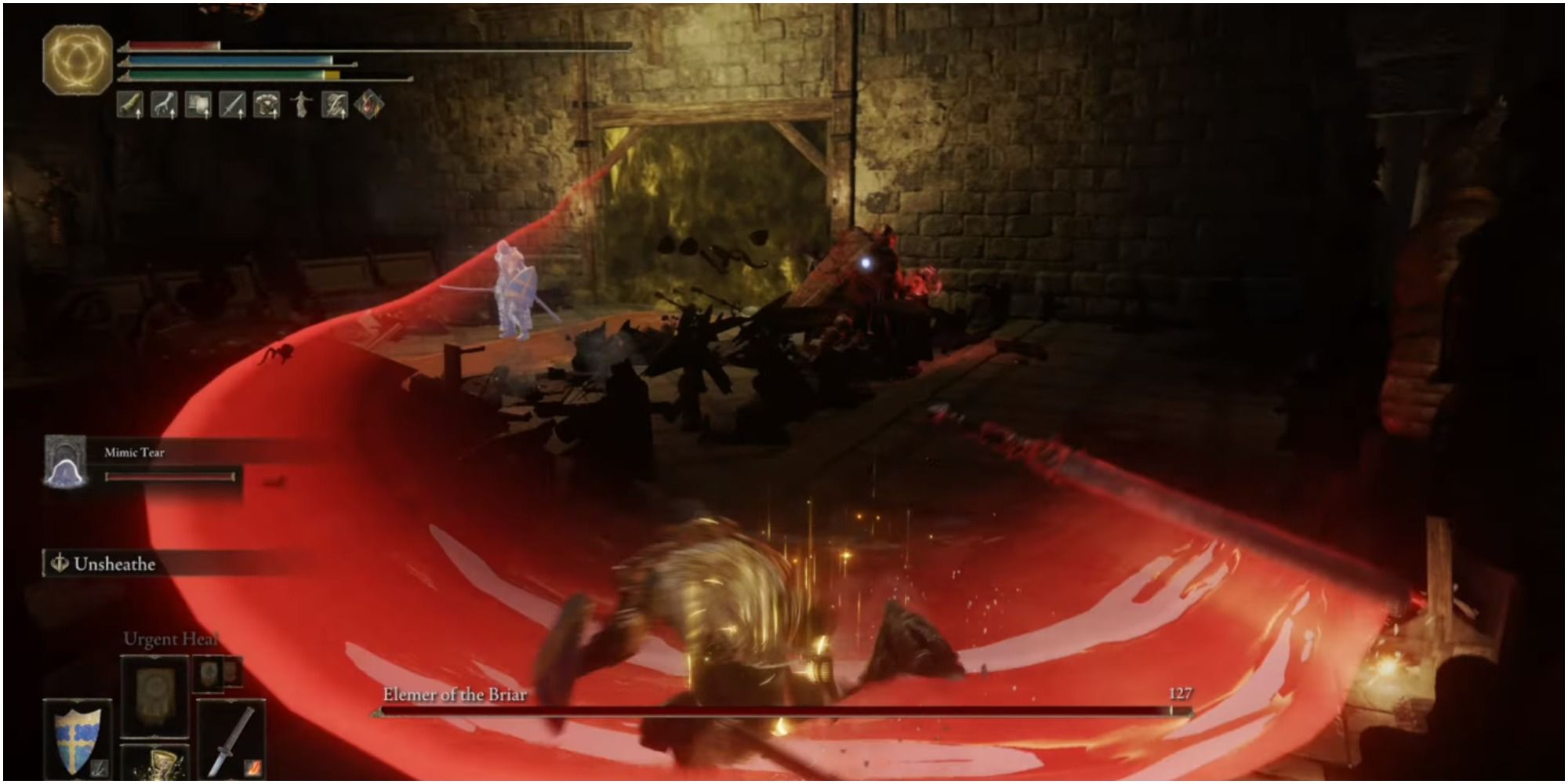 Elemer of the Briar has a variety of attacks, both close and long-ranged ones. Keeping your distance in the battle can prove troublesome for the first time in a boss fight. 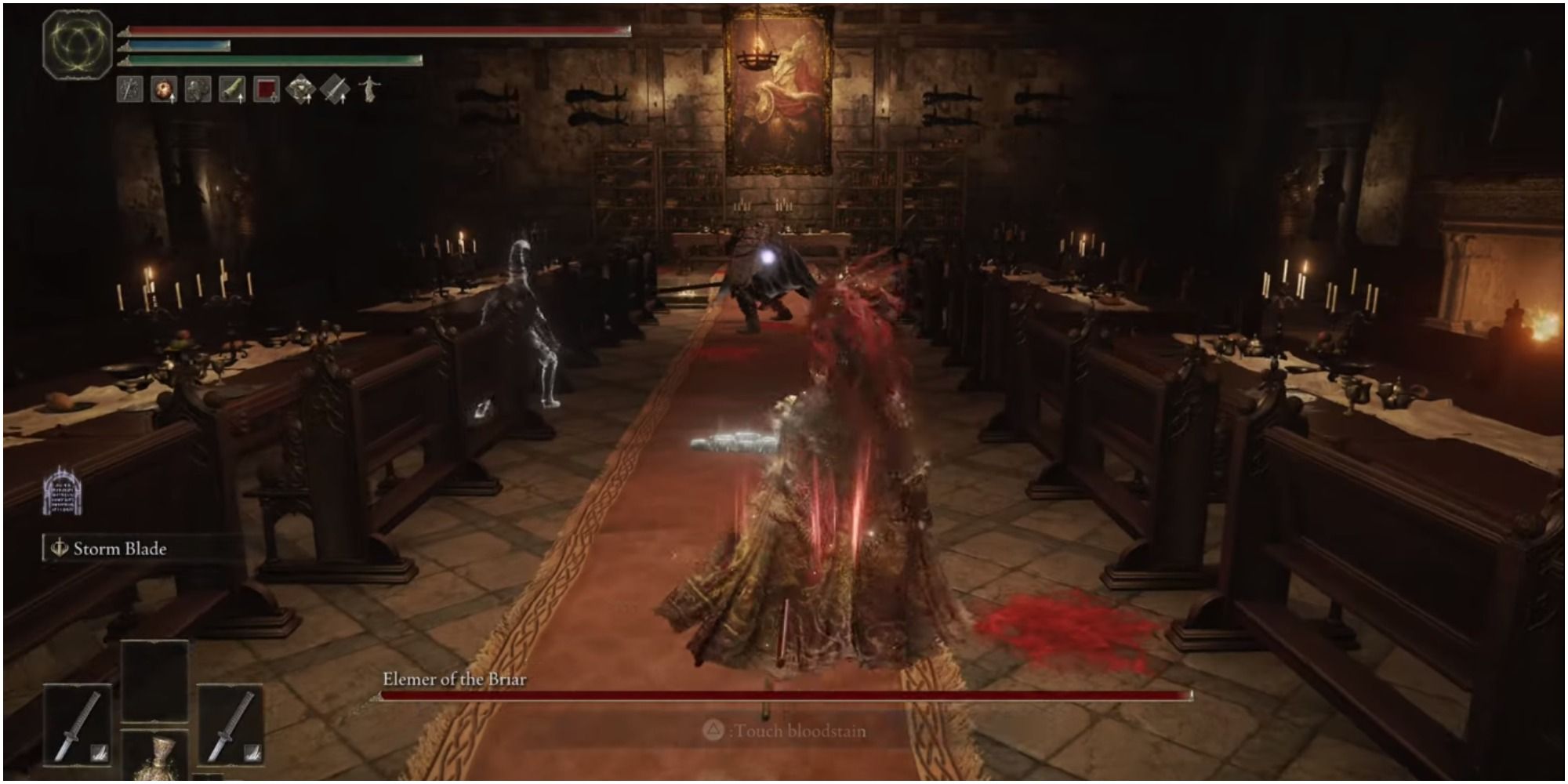 The boss puts his shield down and charges at you from mid-range, knocking you down.

Counter: Rolling to either side will avoid the charge. 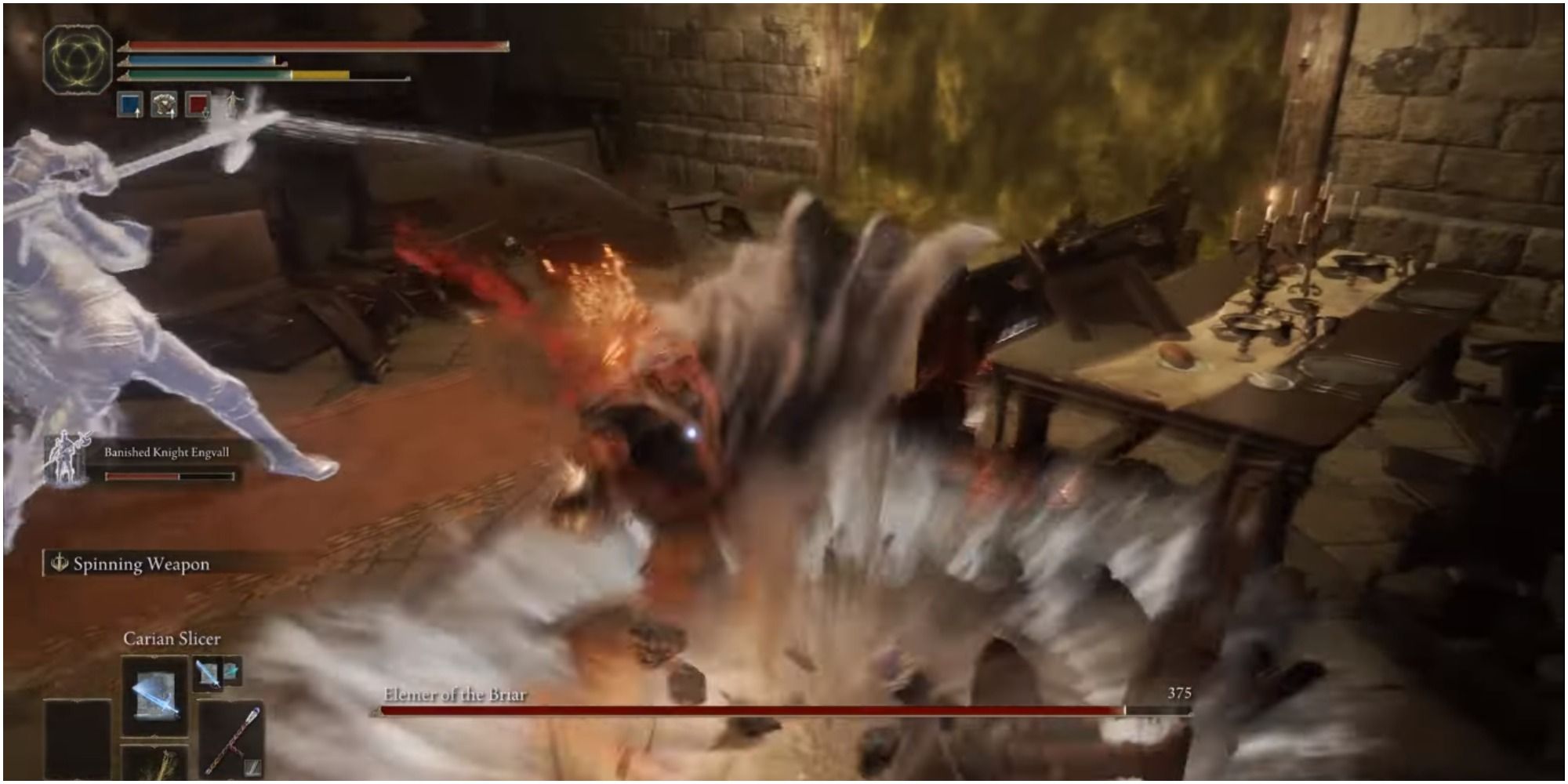 Elemer of the Briar slams down his shield on the player, knocking the Tarnished down.

Counter: You need to dodge or roll backward when you see the animation. 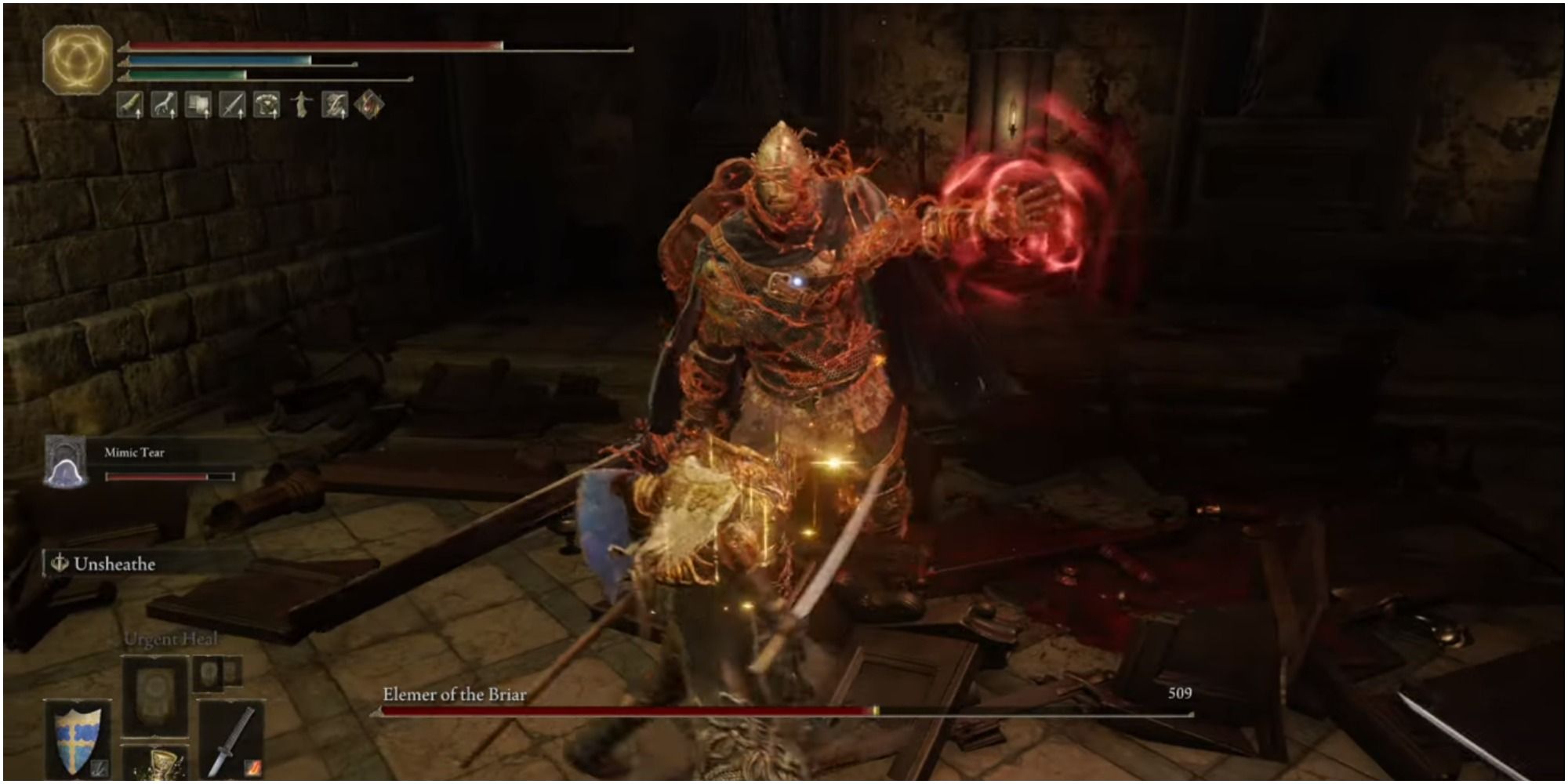 The boss starts to charge up red power in his left hand and tries to grab the player if you are near him.

Counter: You need to get away from the boss when you see him trying to charge power in his left hand. 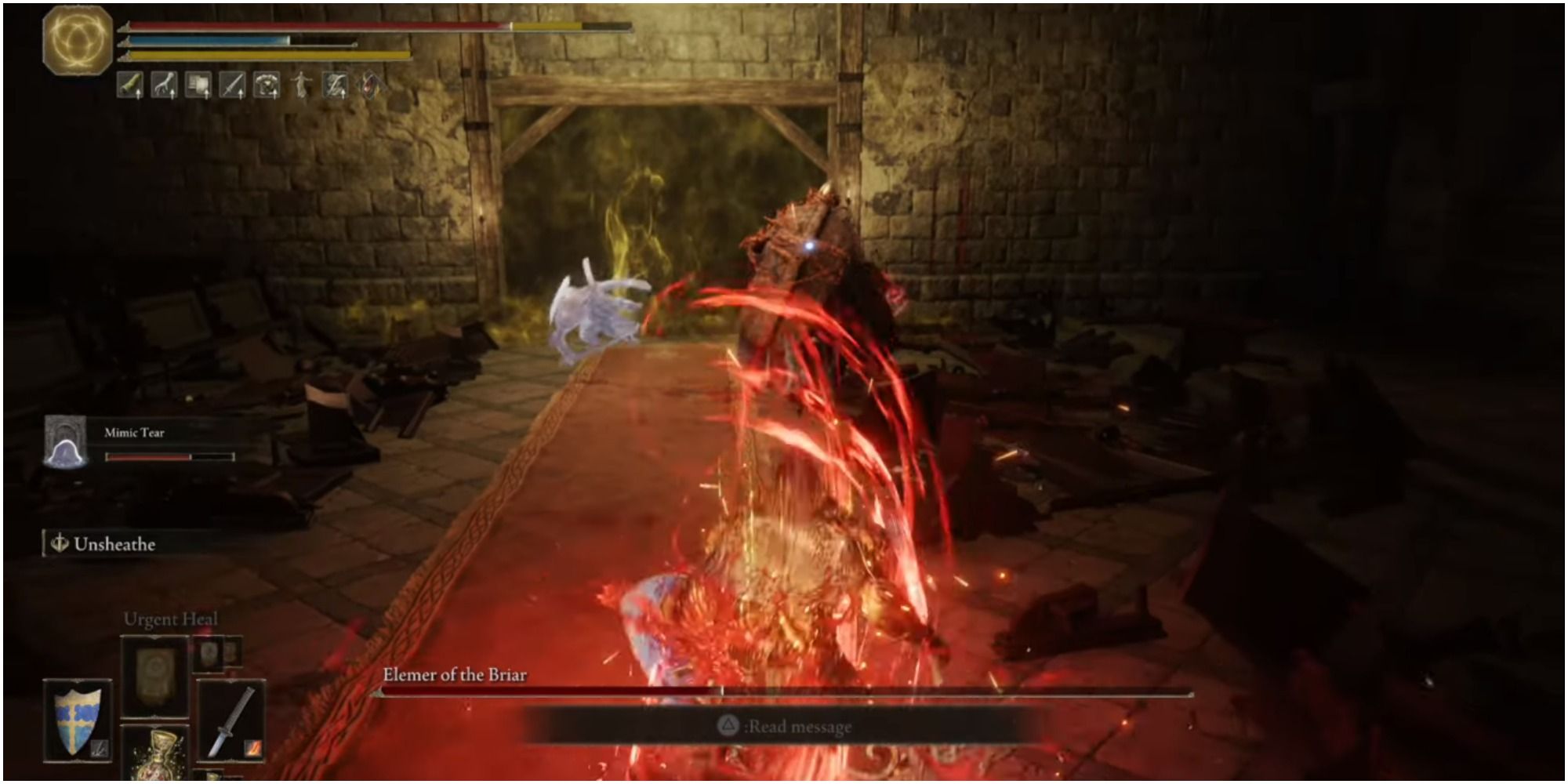 Elemer of the Briar charges up his sword and thrusts it at the player.

Counter: Roll either side to avoid it.

Whenever the player is at mid to long-range, the boss powers his sword and makes it float, increasing the swing range by a large margin.

Counter: The swings are slow, allowing you to dodge either forward or back to avoid all of them. 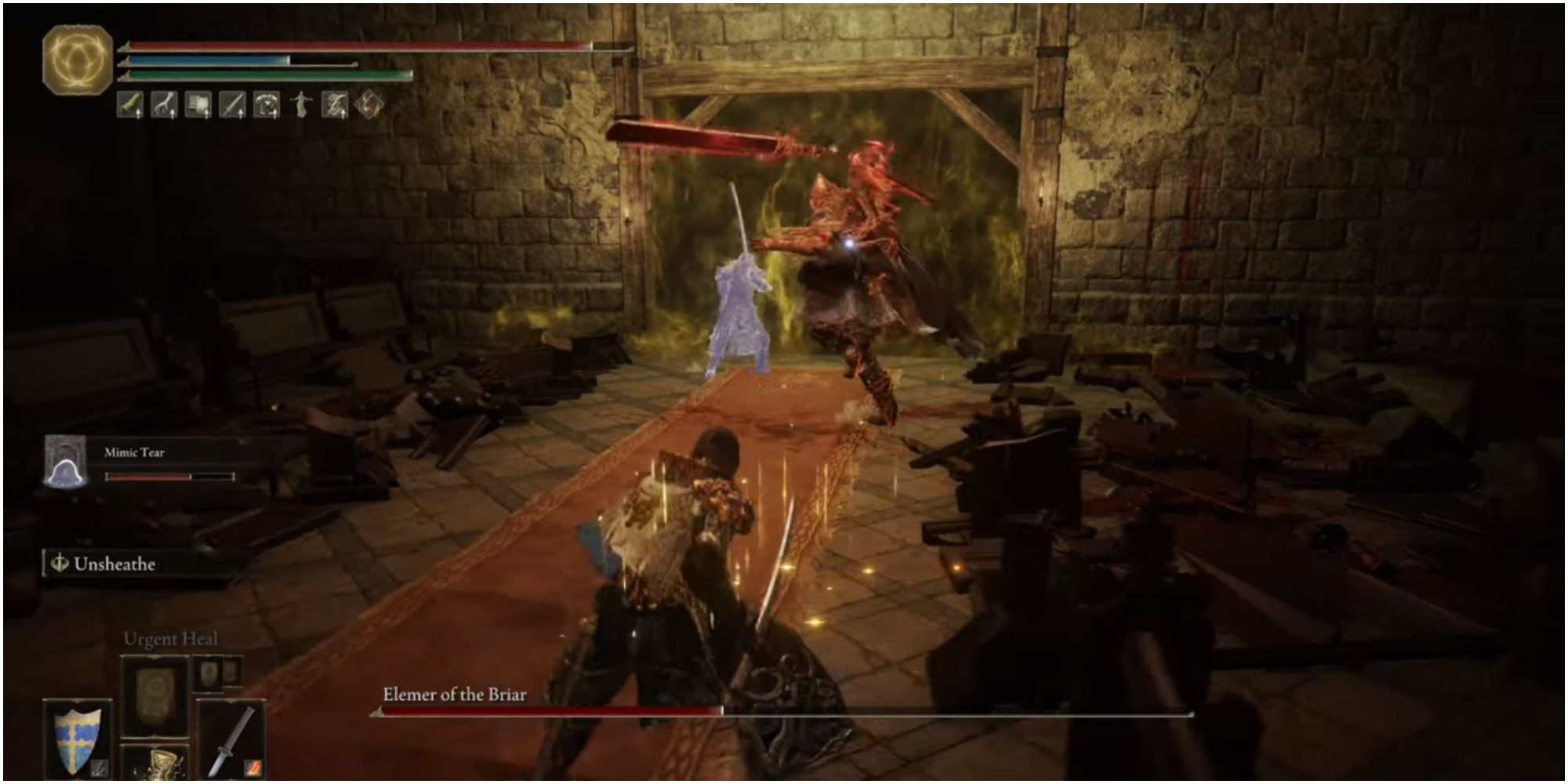 The boss attacks the player with a sword swing and then throws the weapon at them.

Counter: Dodge as soon as you see the red power on his sword. 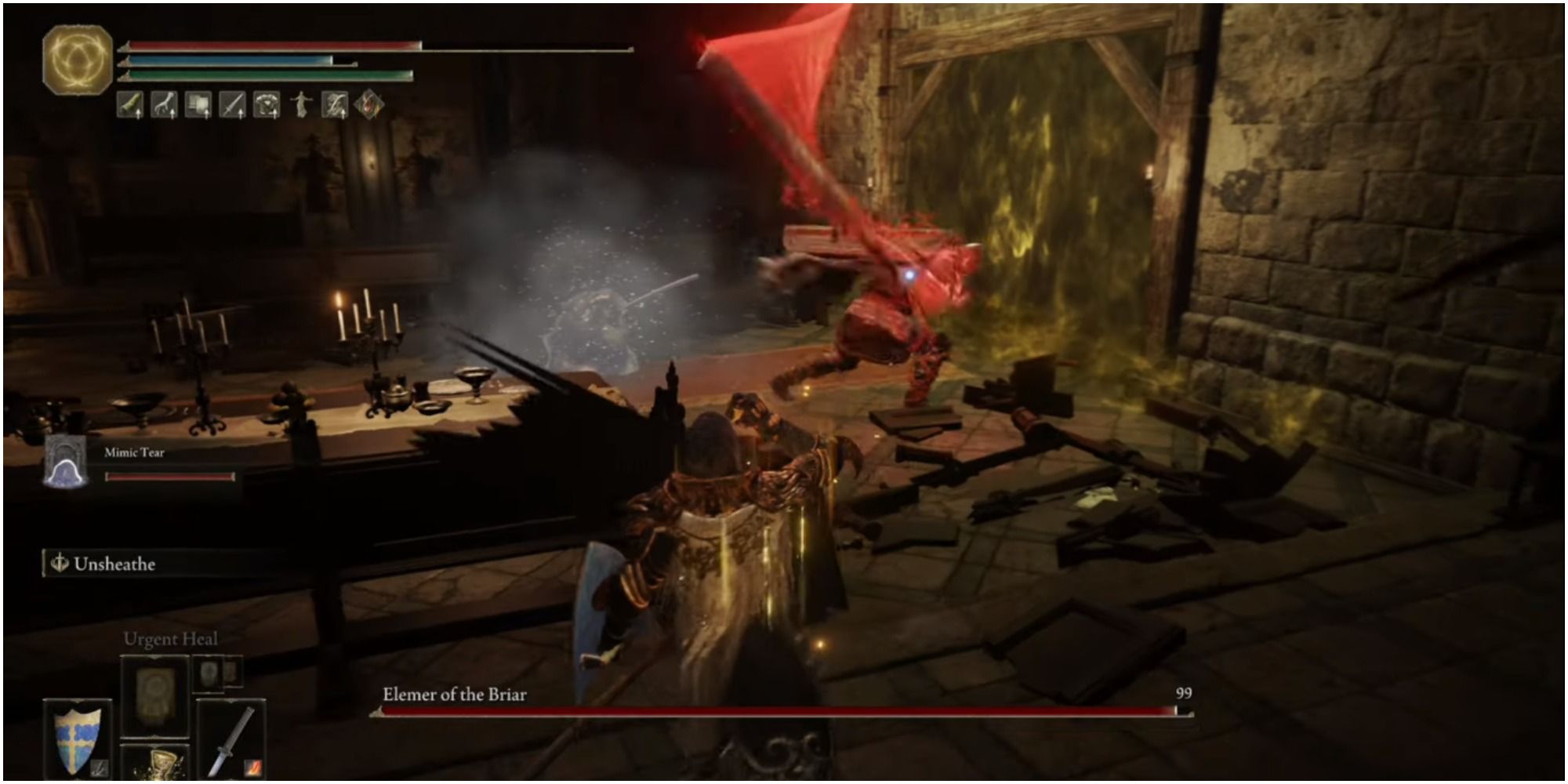 There are two main strategies for this fight: using a close-range weapon to break his poise and bring him down to his knees or melting his health bar with Sorcery. 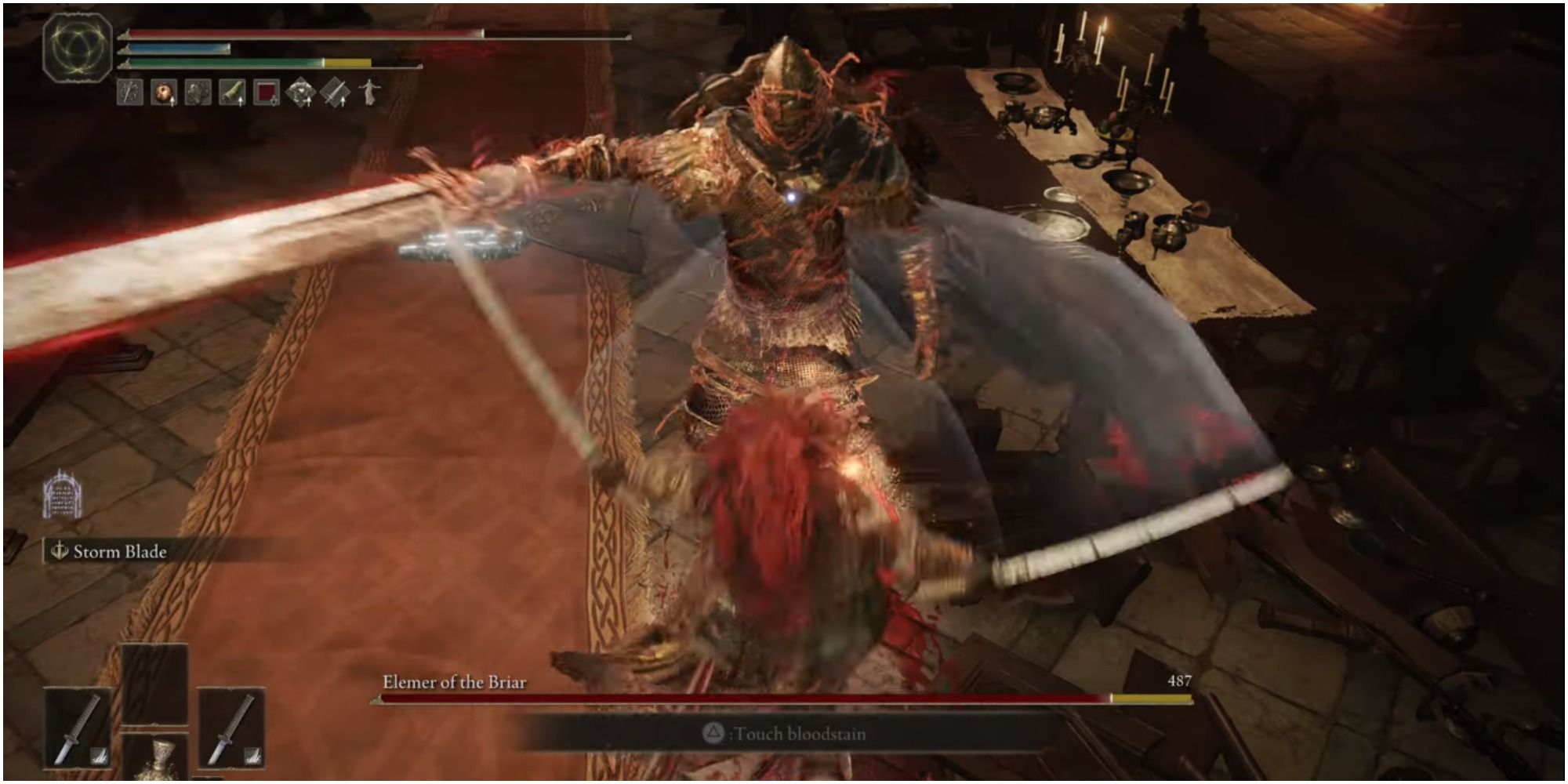 For the melee strategy, you need to stay close and destroy his poise. A heavy weapon can do that relatively quickly, but the boss does not stagger after every hit, so it might be a risk. If you summon another player, both of you can spam jumping heavy attack to break the boss' poise faster, allowing you to get a critical hit in for serious damage. You can also bring a bleed weapon to fill the Blood Loss on the boss.

You only need to watch out that you do not get grabbed or get hit by the shield slam. 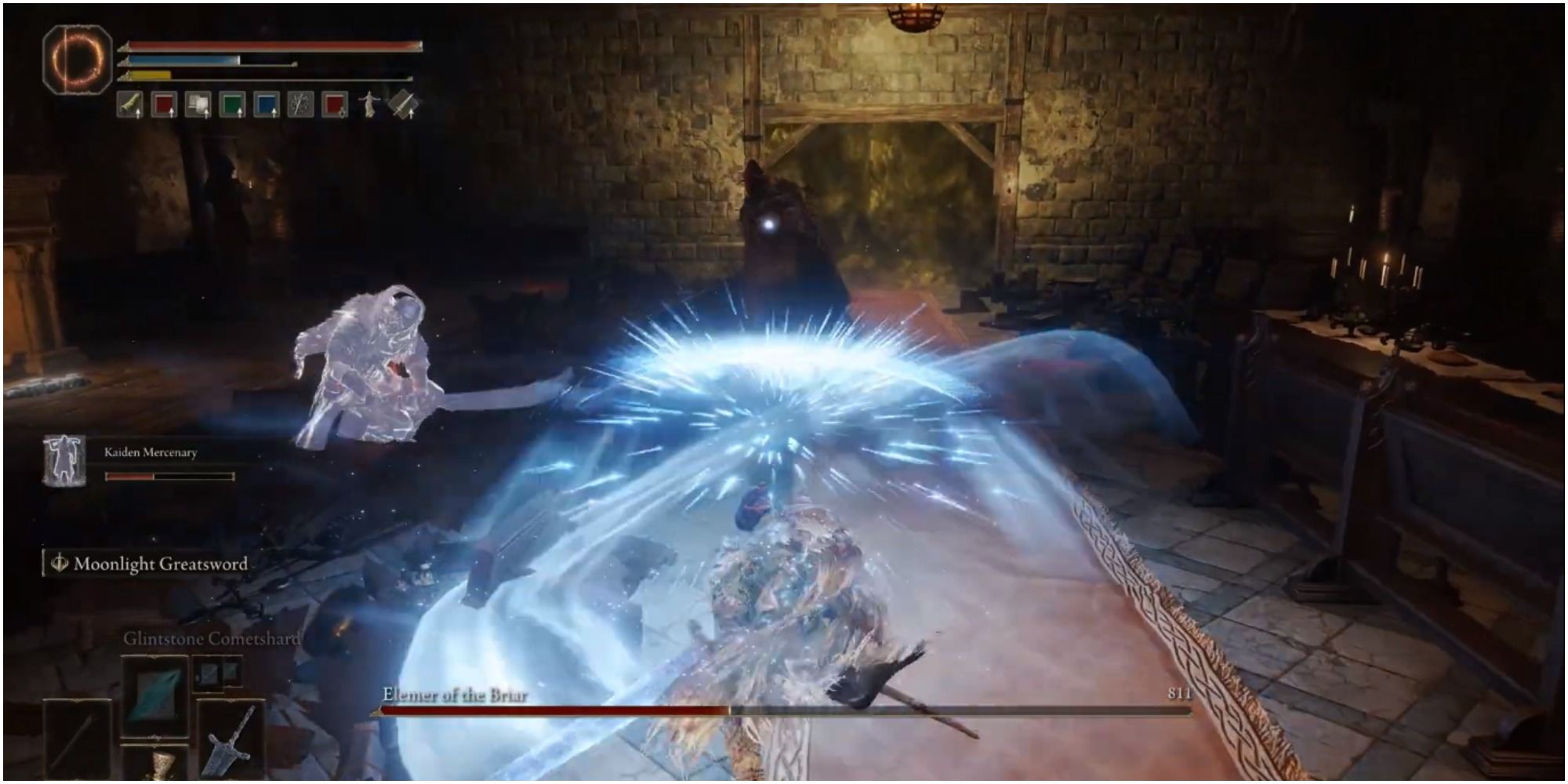 The ranged strategy for this boss fight is quite simple. You can use the Cerulean Hidden Tear on your Wondrous Flask to make your spells consume no FP for a small duration. Pair this with the Comet Azur (Sorcery), and you can do shoot the beam for more than ten seconds melting the boss' health bar. Other forms of Sorcery also work well as you can keep your distance from the boss at all times.

You need to keep an eye out for the ranged swings and shoulder charge as you need to dodge these.

You can use Faith Incantations on the boss paired up with Radagon Icon (Talisman) to decrease their cast speed. Summoning a Spirit Ash or player can also prove to be useful as you can have them aggro the boss while you blast the boss with your spells.