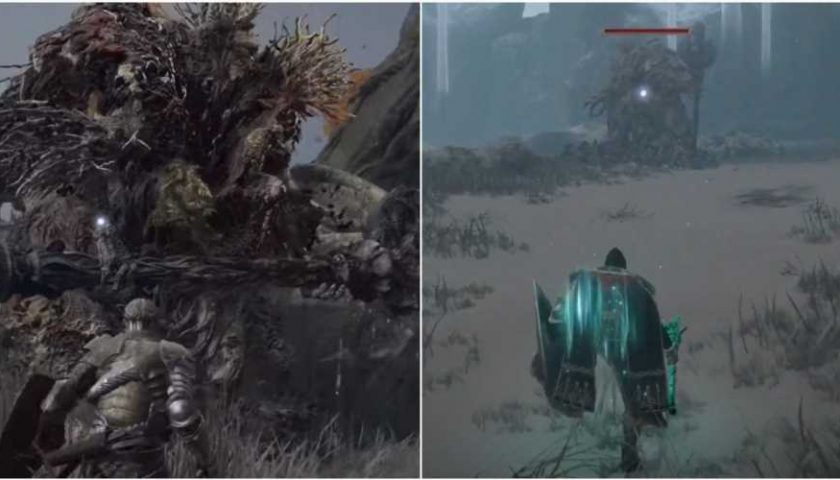 On your journey as the lowly Tarnished, traversing Elden Ring's The Lands Between, you will possibly come across bosses carved entirely out of tree bark and wielding a large mallet. Armed with both melee and ranged attacks, these beings are known as Erdtree Avatars – Mother Nature's guardians come to life. But what about their counterparts, the Putrid Avatars?

These Putrid Avatars are far deadlier than their Erdtree Avatar kin, stronger and wielding the powers of the Scarlet Rot. Without further ado, here's a comprehensive outline of everything needed to face a Putrid Avatar. 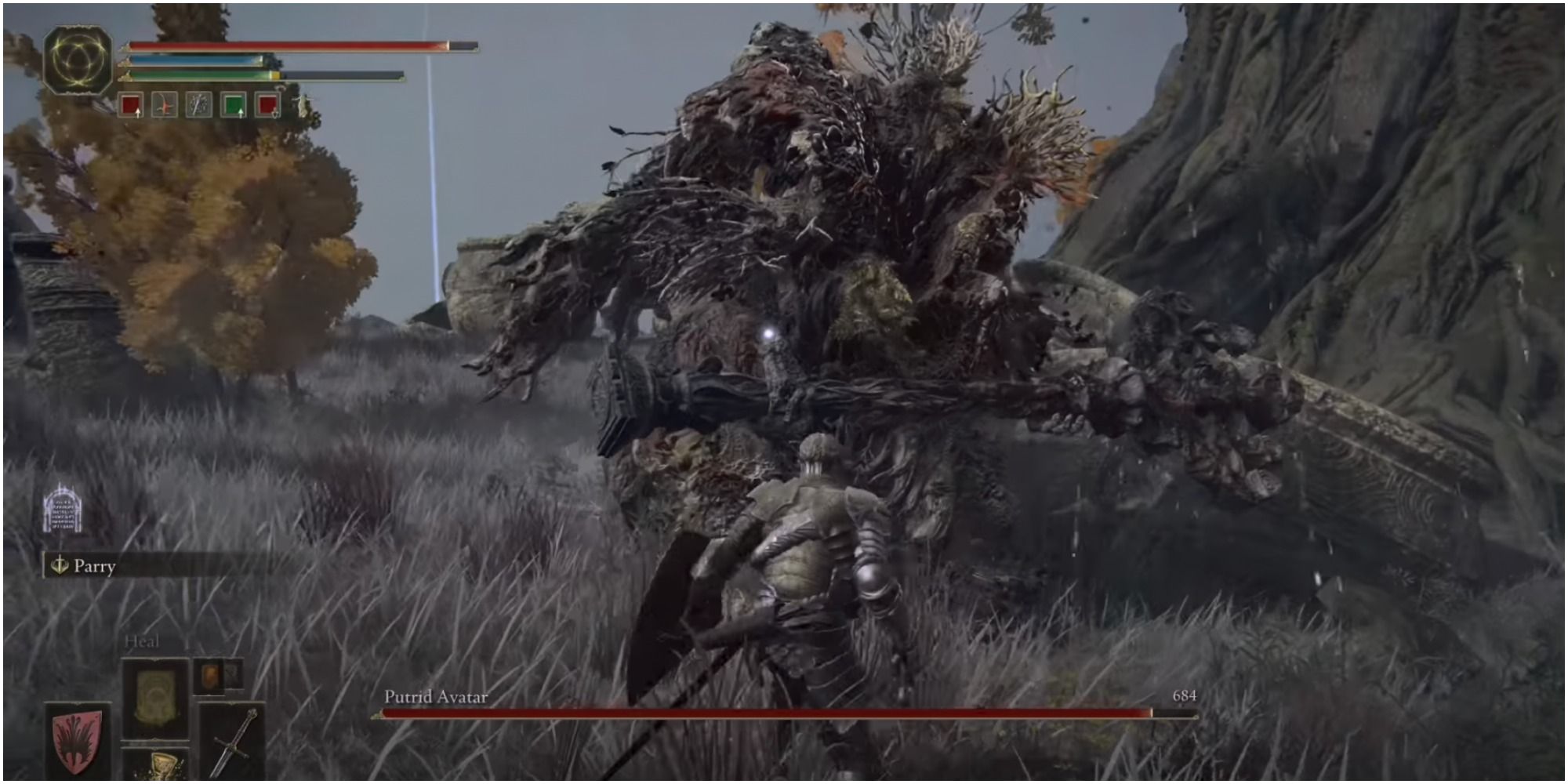 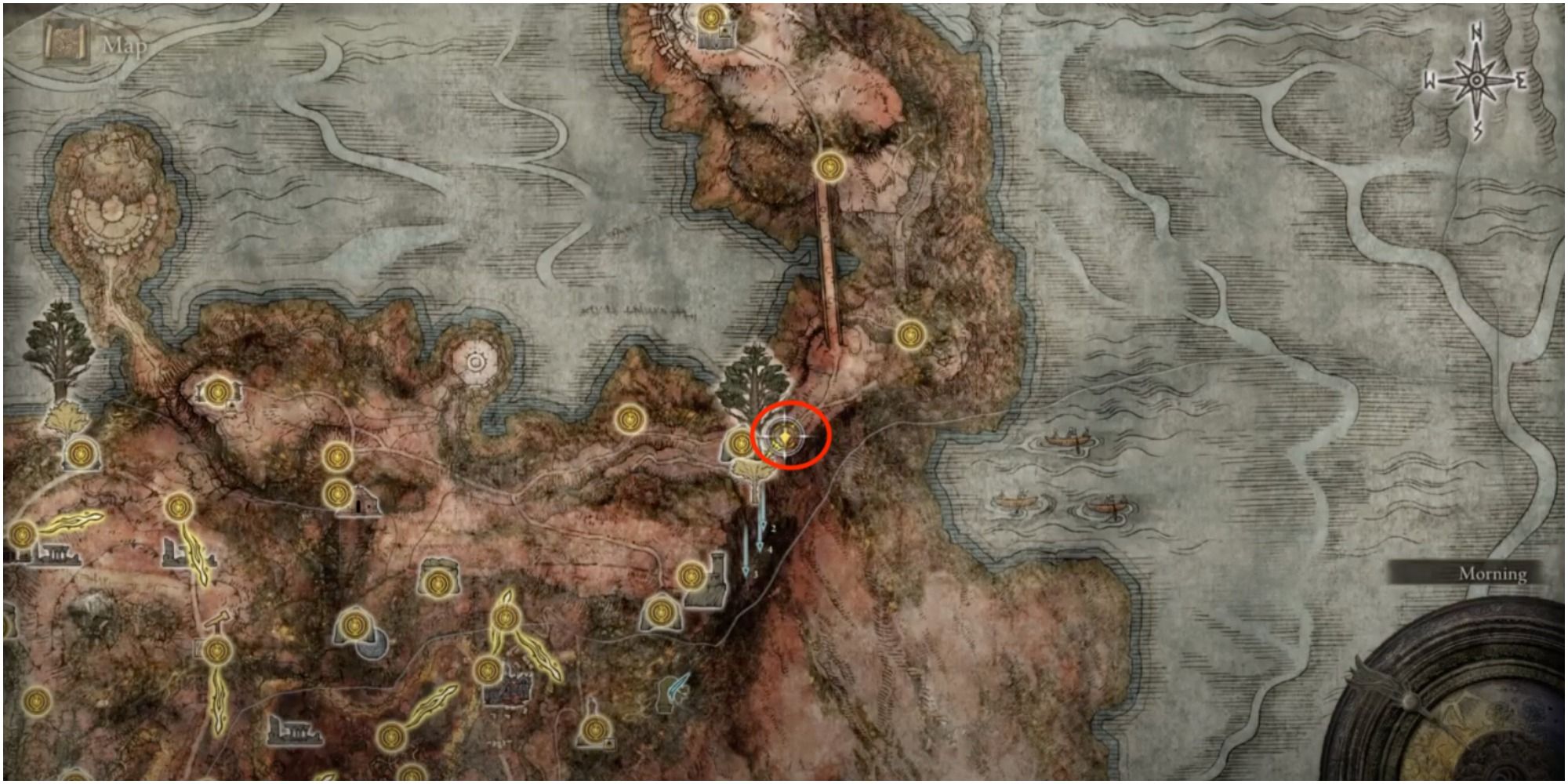 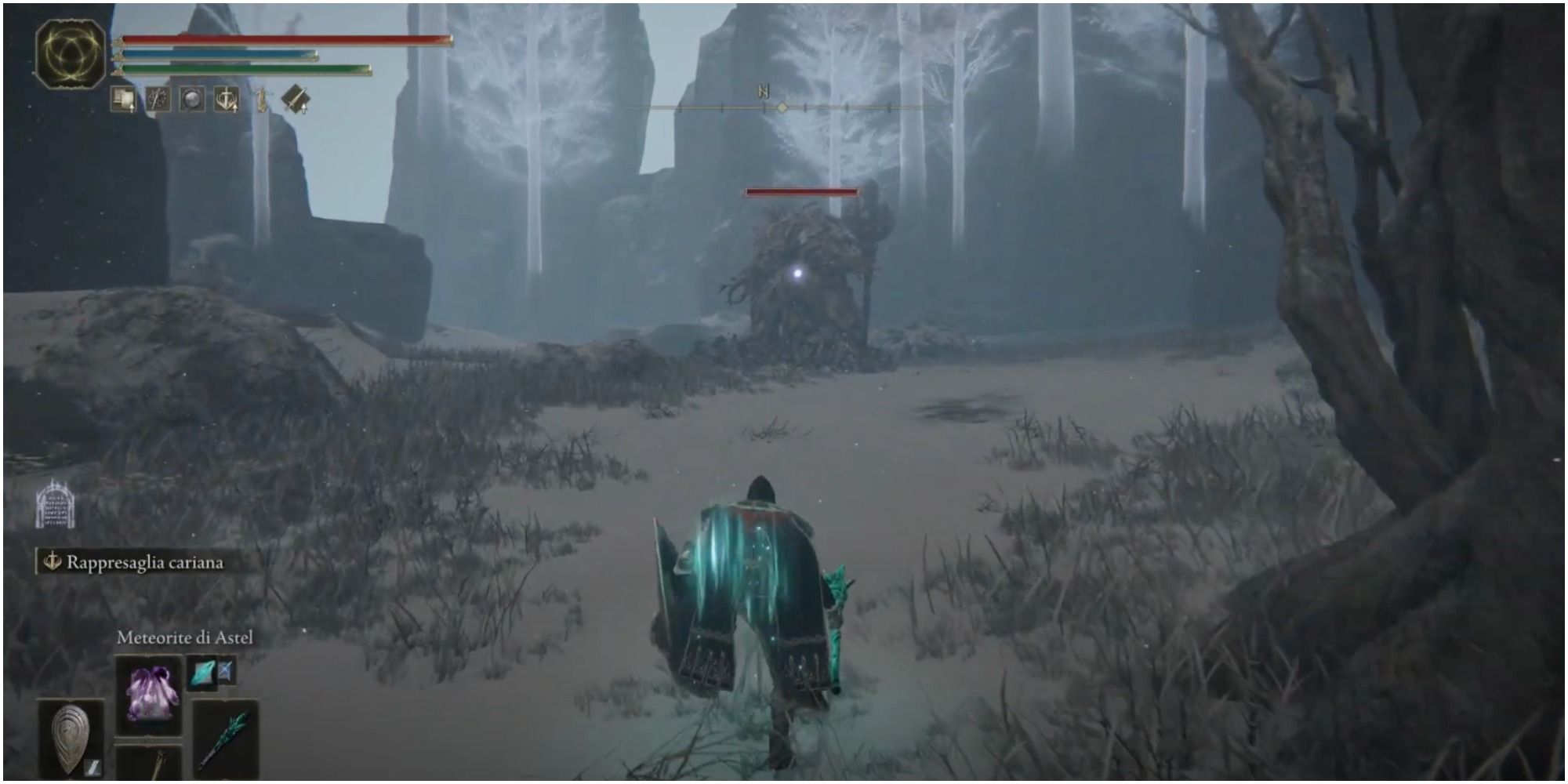 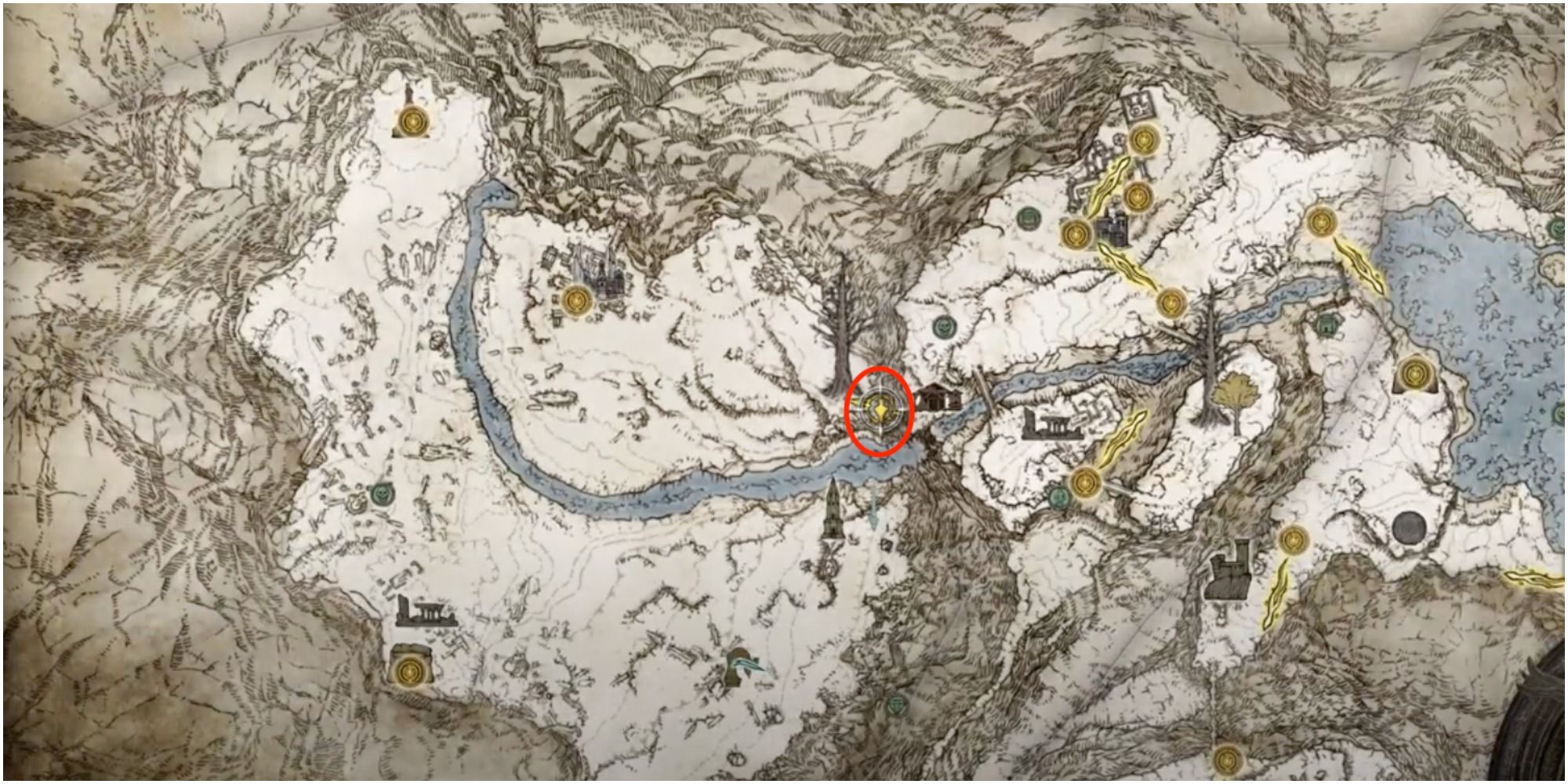 Like the Erdtree Avatars, Putrid Avatars can be found at the base of Minor Erdtrees in Greyoll's Dragonbarrow in Northern Caelid and the Consecrated Snowfield respectively. As mentioned before, the Putrid Avatar has the ability to produce Scarlet Rot, which proves to be the greatest weapon in their arsenal.

Since they are found in higher-level areas, that means you'll have to scale up as well; particularly your weapons. Weapons that are +2 won't do significant damage, unfortunately, so having a +5 and above is recommended. This goes for Spirit Ash summons, too. 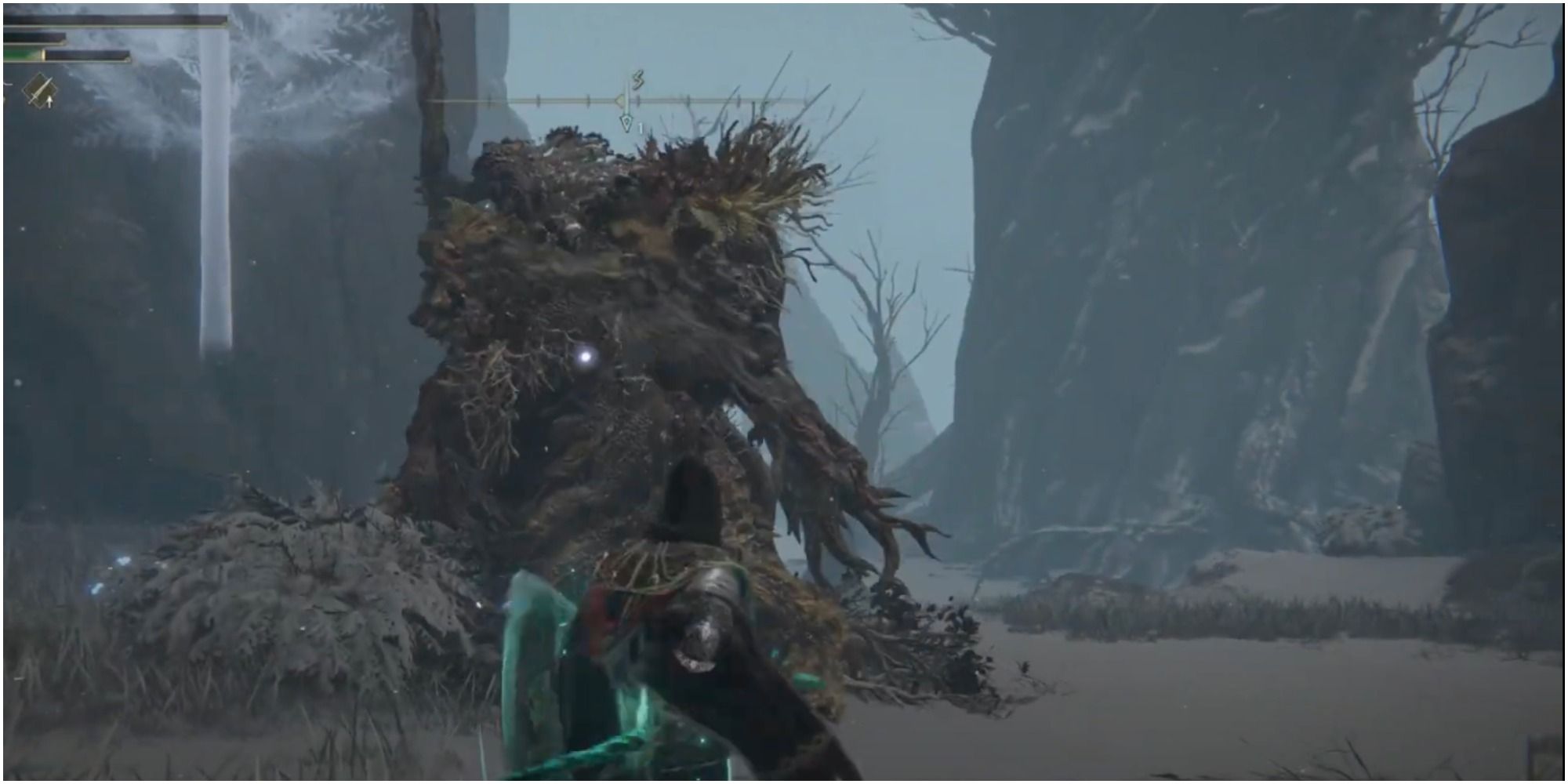 Both Putrid Avatars found in the game have the exact same move set. However, their melee attacks definitely hit so much harder, at times even one-shotting you if you have not sufficiently levelled up your Vigor stat. Just being in the vicinity of its AoE Scarlet Rot attack can drain your HP significantly, if you're not careful. Hence, we are going to delve deep into the Putrid Avatar's full range of attacks. 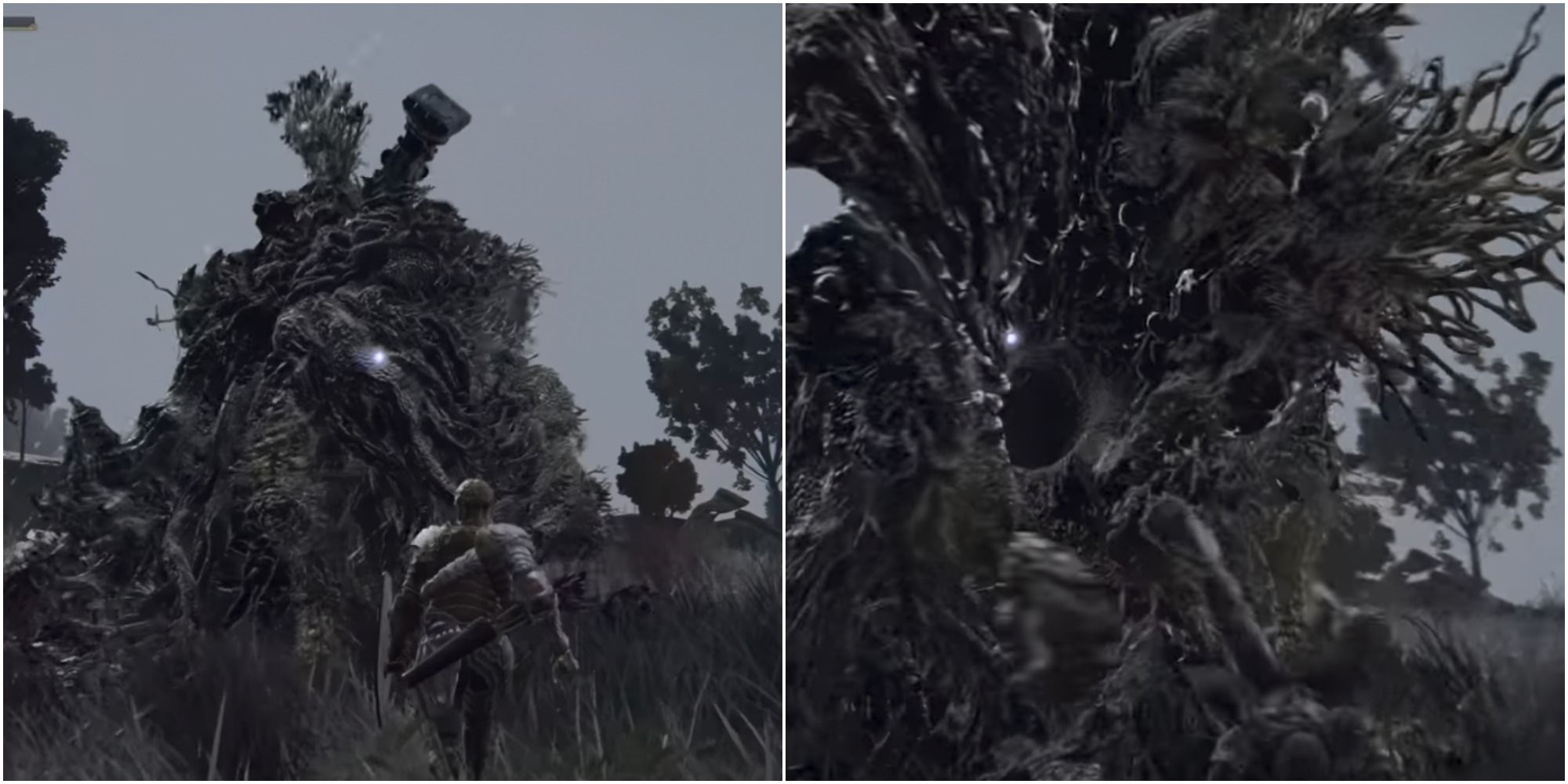 An attack you definitely want to avoid, the Putrid Avatar performs an overhead slam that is absolutely devastating. You can tell when it's about to do this attack when it rears back with its weapon over its head, before quickly throwing its body forward and slamming its weapon down.

Counter: Dodge to your right as soon as you see it about to throw its body forward. You can also roll forward to avoid getting hit. 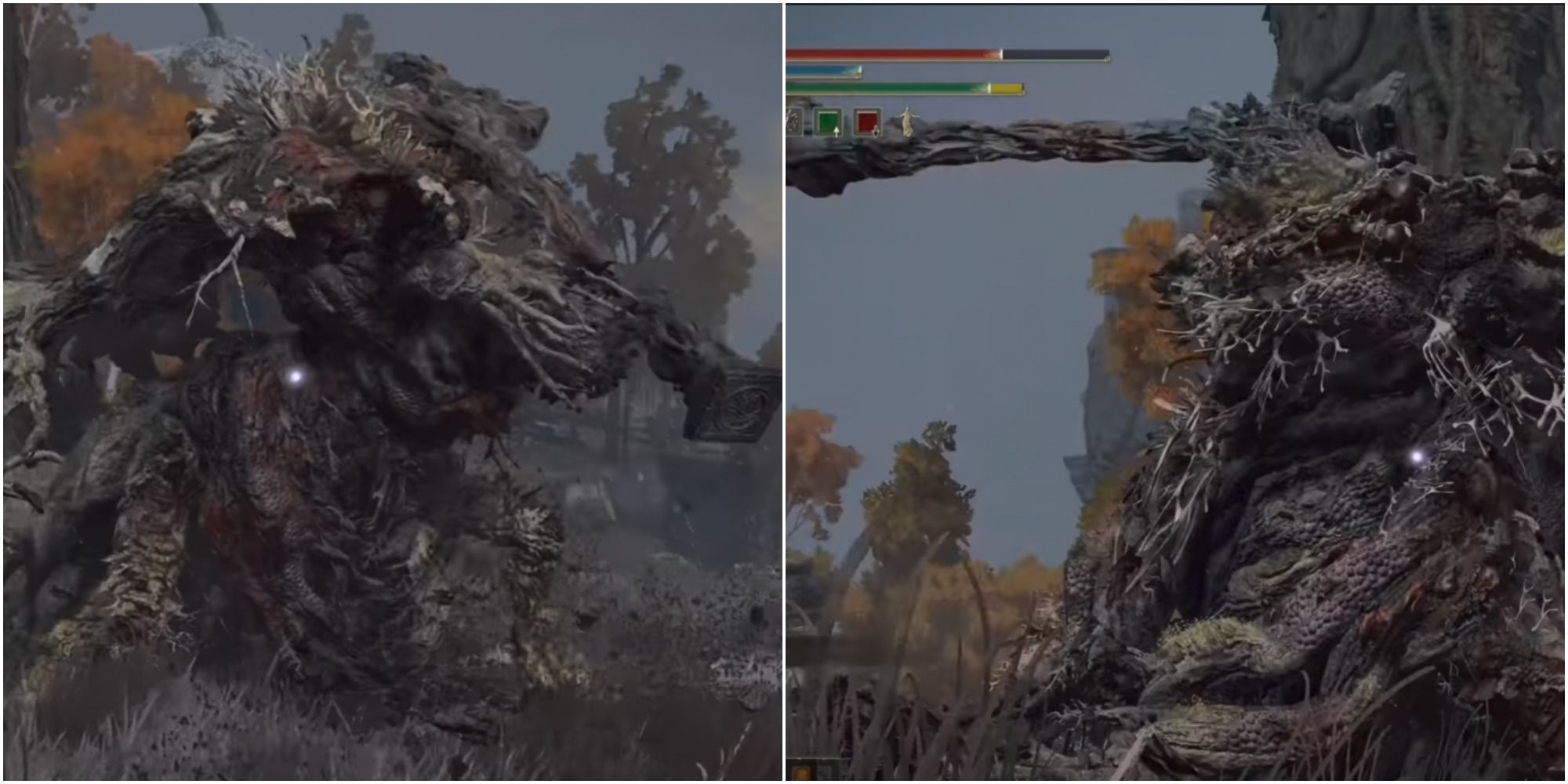 One of its most common attacks if you're up close, it will first pull its arm back before swinging left, then right. This attack is usually used as a follow-up after the overhead slam.

Counter: You can either roll backward or roll toward the opposite direction the swing is coming from. You can also roll into the boss. 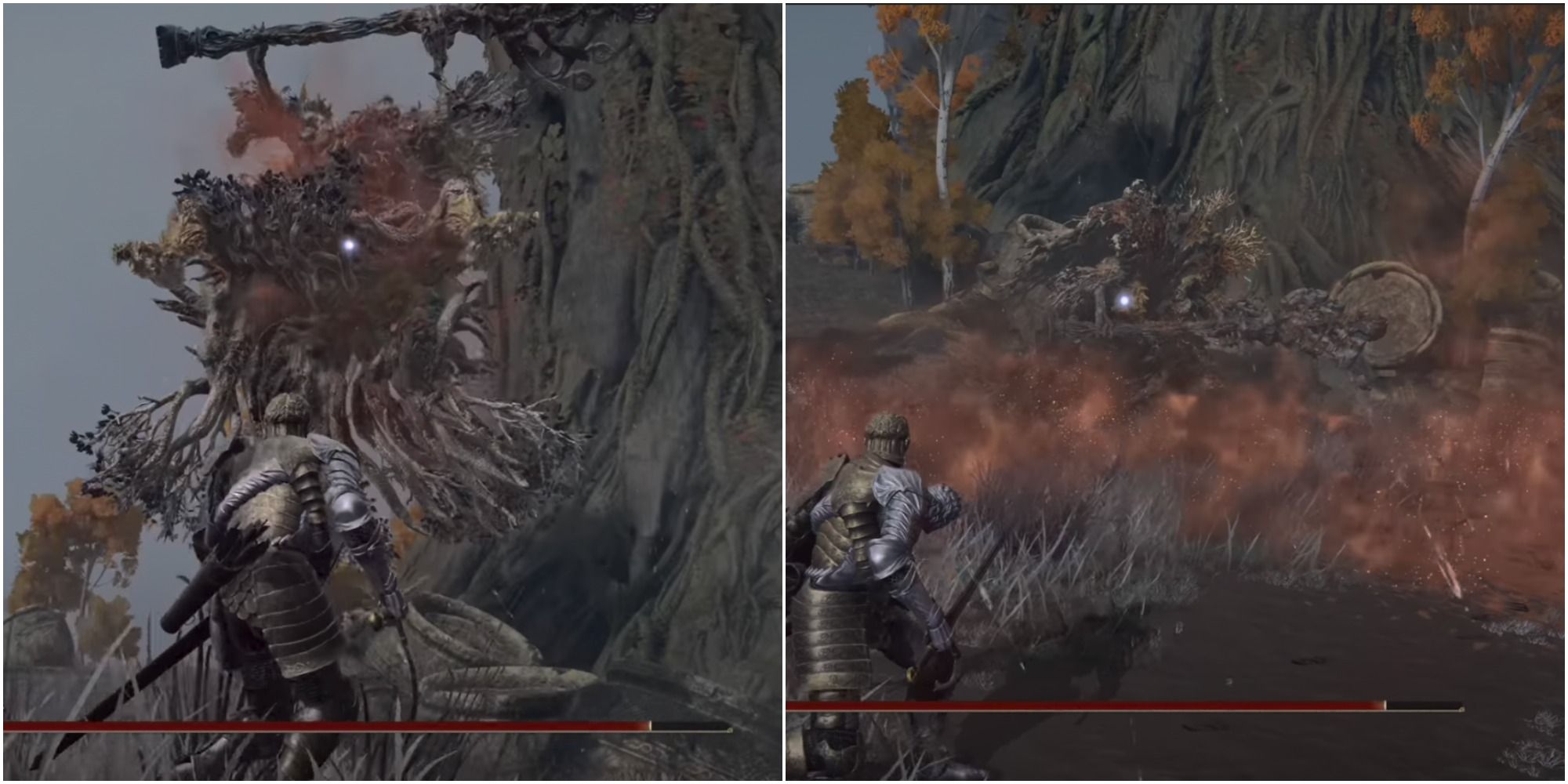 The most devastating attack the Putrid Avatar has, this boss will launch itself into the air, and then come down again to unleash an AoE Scarlet Rot attack. This attack will increase your Rot buildup very quickly if you do not dodge fast enough, and with every increase you will lose a chunk of your HP.

Counter: As soon as you see the Putrid Avatar jump into the air, roll away as far as you can, since the Scarlet Rot mist has quite the range. 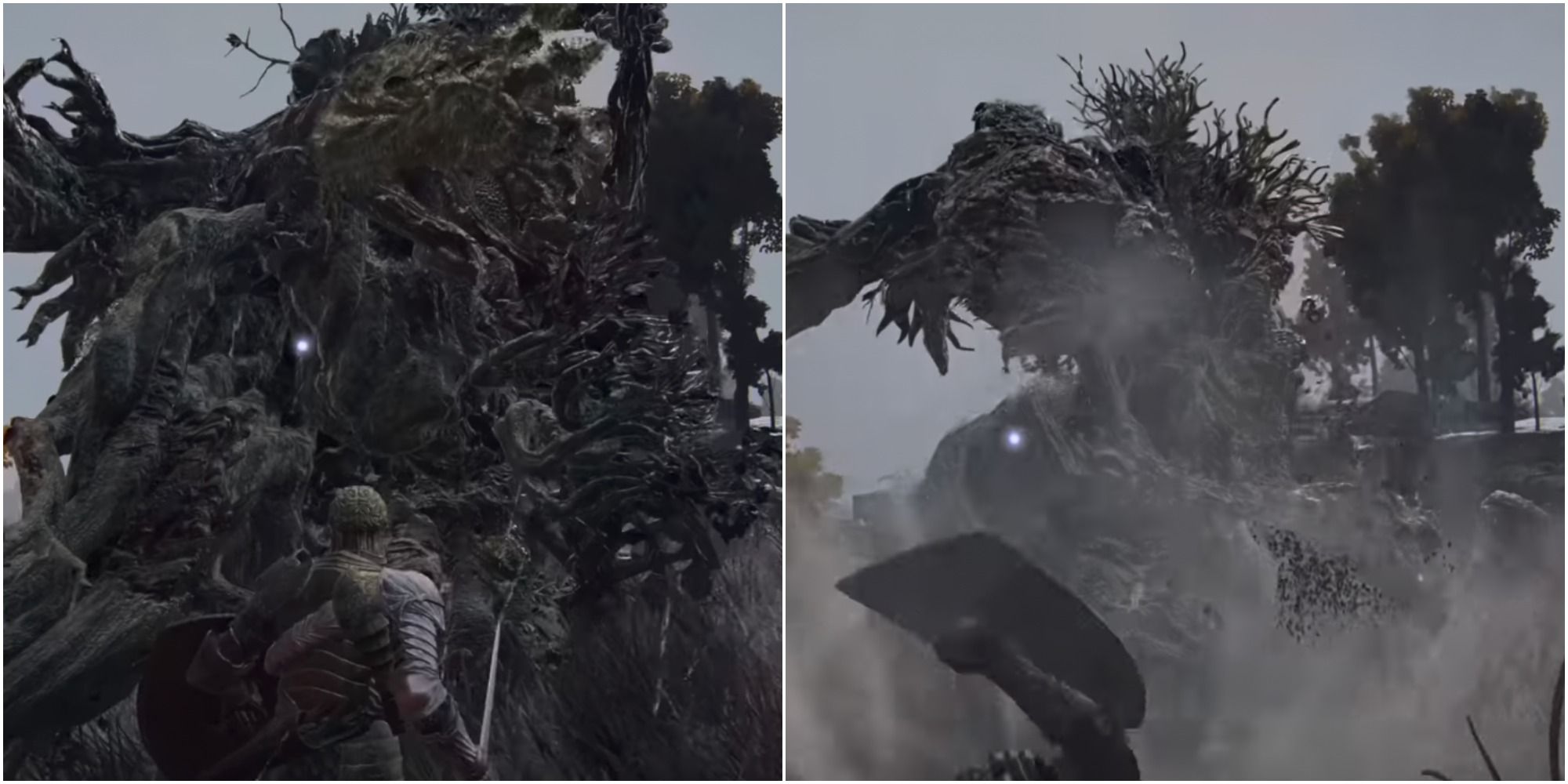 Another standard attack, the Putrid Avatar lifts one foot up and subsequently slams it onto the ground, causing it to rupture.

Counter: This attack is very easy to predict. The moment the boss lifts its foot, roll backwards immediately, and as far away from the area of attack as you can. 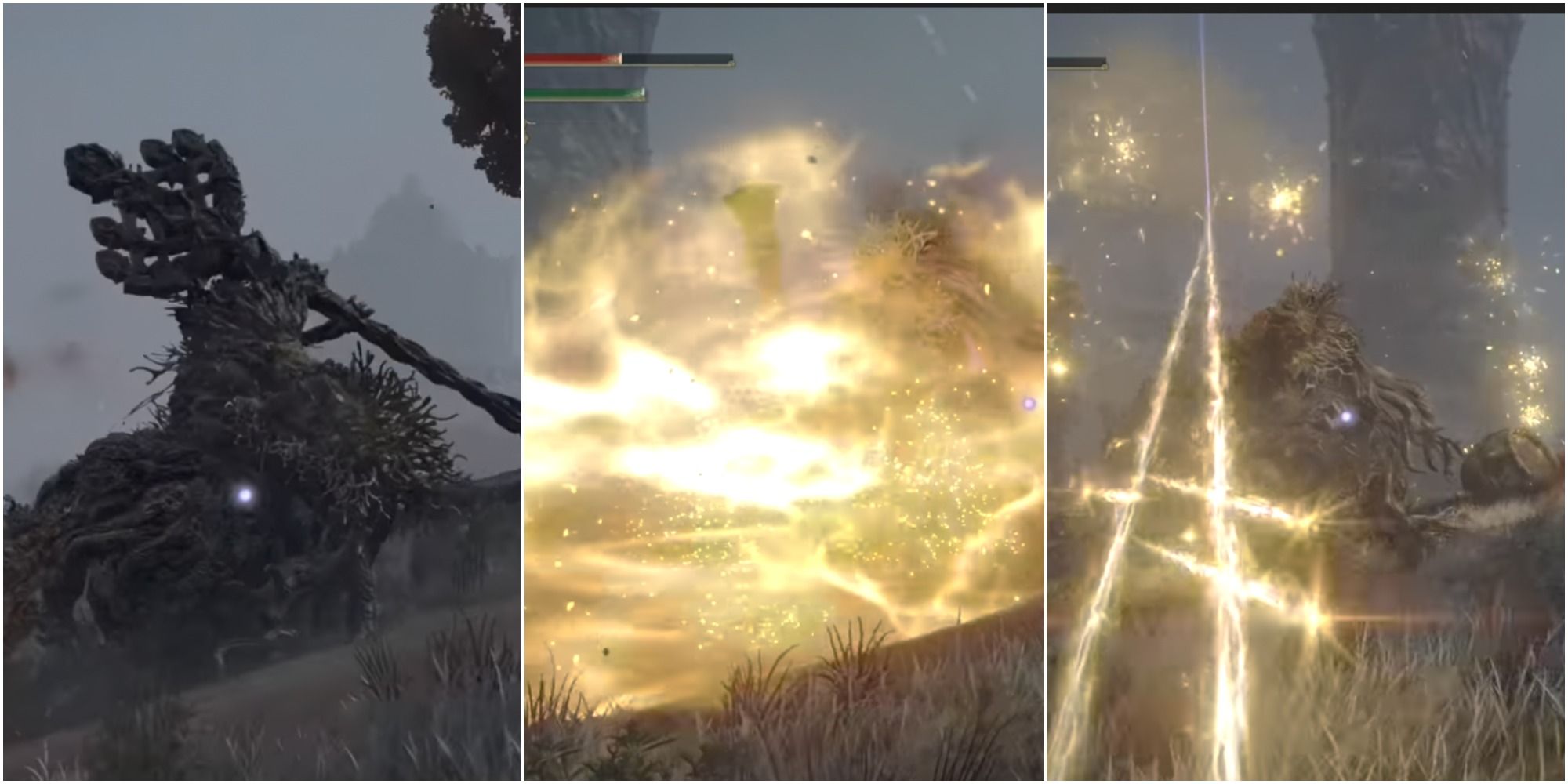 If you're a ranged fighter or have simply created distance from the boss, the Putrid Avatar will hold its weapon aloft, then slam it down to create a golden orb that quickly explodes. When the latter happens, multiple small, golden balls will form in the air, before launching itself as you one by one.

Counter: You can either summon Torrent and gallop in the opposite direction, or simply run as fast as your legs can carry you. 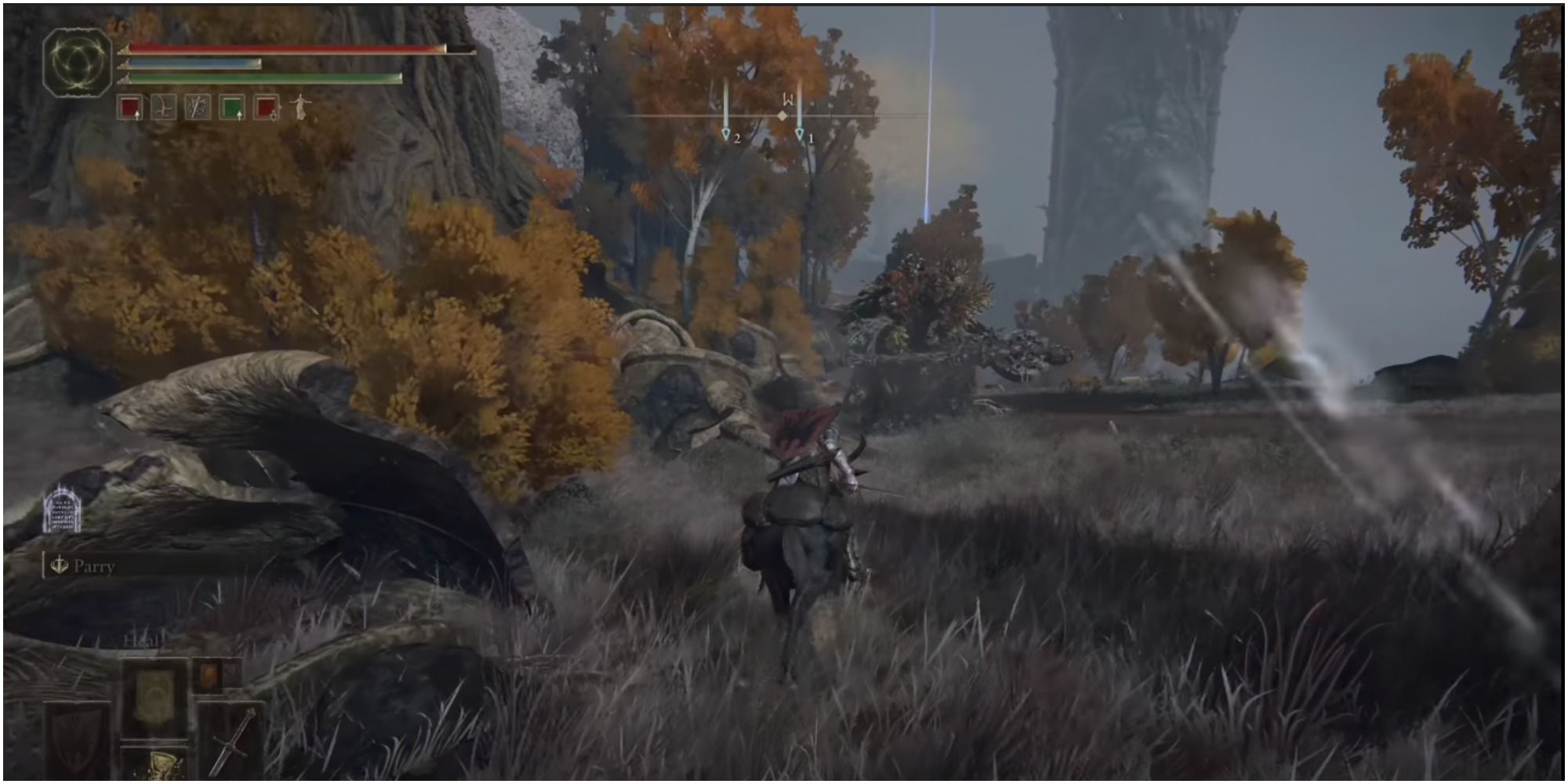 In order to deal with the Putrid Avatar's moveset, there are two varying ways to go about it. By going melee, you'll be vulnerable to its hard-hitting swings and overhead slams, but your weapon (+5 and above) deals physical damage. However, sorcerers possess the advantage of attacking from a distance, but must make sure their spells deal tons of physical or fire damage.

Prepare some Preserving Boluses prior to the fight in order to dial down the Scarlet Rot buildup — just in case you cannot evade its AoE attack quickly enough. 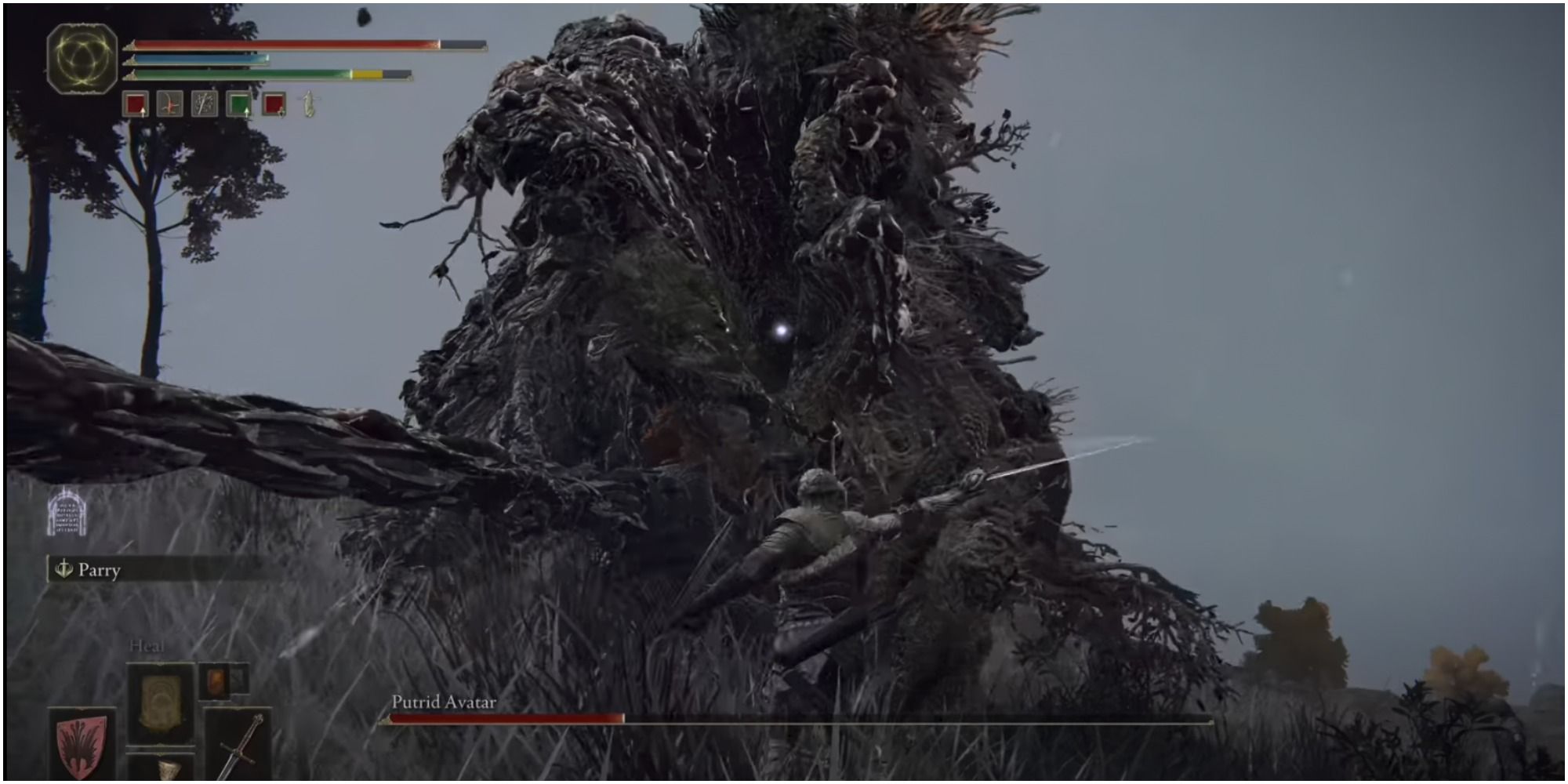 Unlike any other boss, the Putrid Avatar is not made out of flesh or blood, and so using a weapon with Bleed damage does nothing. However, using a weapon +5 and above that deals immense physical damage; using a Flame Sling or Black Flame spell if you have the stats required; or crafting some cracked fire pots will help with this fight immensely. Weapon skills like the Moonveil katana's Transient Moonlight deals amazing damage to this boss, while the Bloodhound's Fang skill Bloodhound's Finesse also takes out chunks of HP.

Take note that for both Putrid Avatars, their respective boss arenas are either quite a squeeze or simply have too many obstacles that you can easily get cornered in. Caelid's Putrid Avatar has many living jars dotted around the arena, and they could become a hindrance should you end up dodging into them. Getting on horseback and doing a double jump can help with avoiding these obstacles. 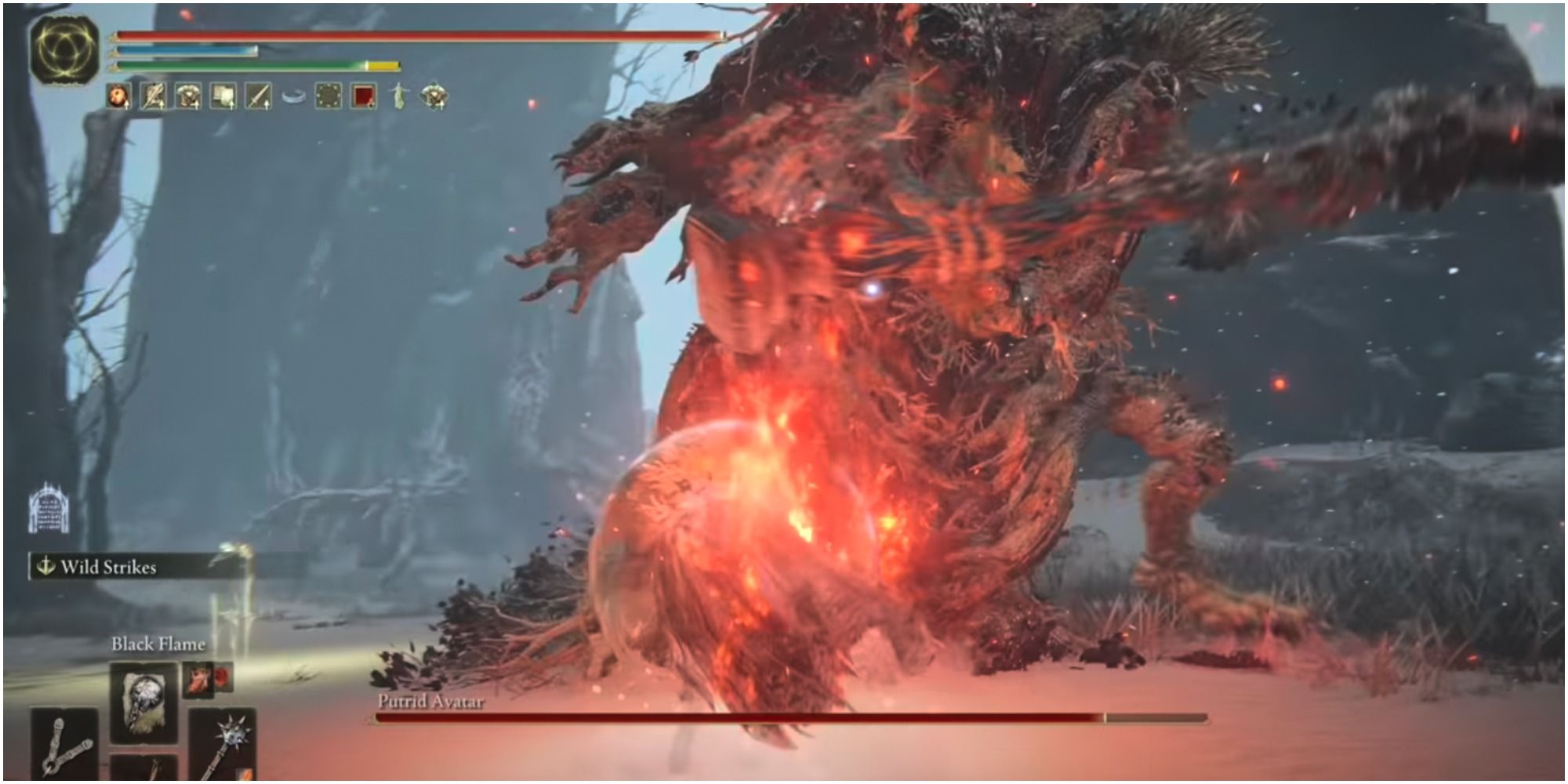 Once more, arming yourself with the Black Flame, or any other fire spell, is immensely helpful in dealing with the Putrid Avatar. You should also consider using sorceries that deal physical damage, such as Rock Sling, Glintstone Greatsword, or Loretta's Greatbow.

Just in case, make sure you have the Opaline Bubbletear in your Flask of Wondrous Physick combination, to give you added protection if you're not able to evade in time. Alternatively, you can summon Spirit Ashes such as Lhutel the Headless to distract the boss while you fling fireballs at it. 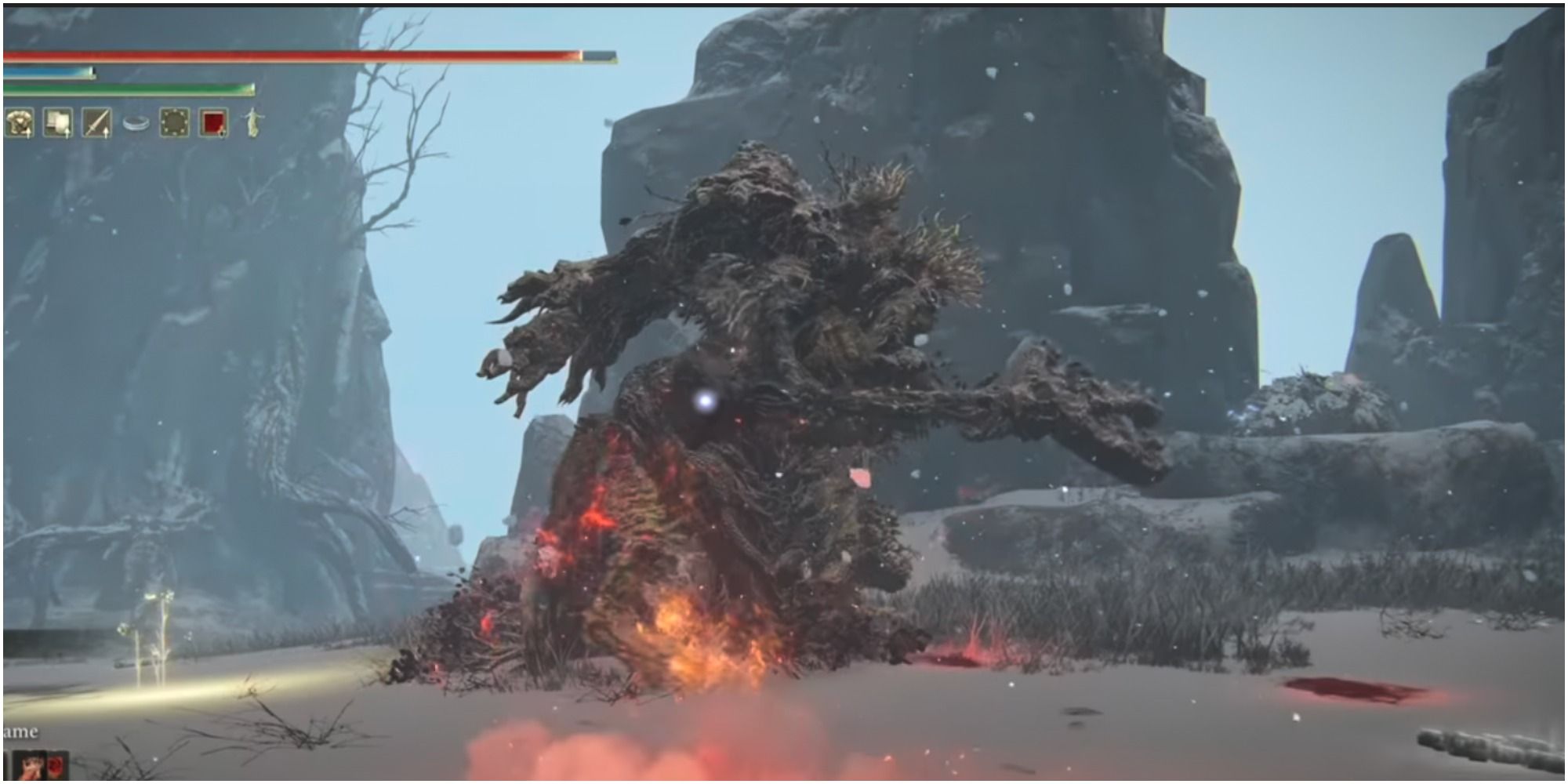