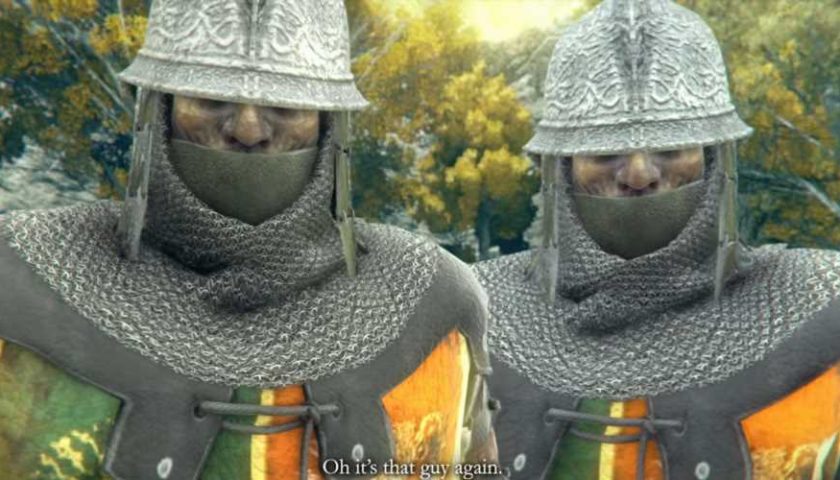 The current world record for Elden Ring speedrunning stands at a blistering five minutes and 58 seconds. This record, held by speedrunner seekerTV, is only possible thanks to a generous helping of exploits and glitches that allow players to bypass vast swaths of what is nominally a 100-hour game.

Watching the Tarnished zip past at lightning speed must look pretty bizarre from the perspective of Elden Ring’s NPCs, a thought that’s showcased in Jonkari P’s hilarious fan video.

The video starts with Limbgrave’s soldiers looking at the new Samurai player, who merely draws their sword and crouches. Then, just as the soldiers seem ready to pounce on this poor, unsuspecting player, the Samurai vanishes in a blur.

A few seconds later, the Samurai reappears at Leyndell, where Hoarah Loux looks up to see them descending from the heavens like a meteor. The game ends in a cataclysmic explosion. Roll credits.

Jonkari P admits watching Distortion2’s speedruns inspired them to make the video. Distortion2 held the world speedrunning record for a while before seekerTV’s sub-six-second run. He taught many of us about Elden Ring’s zip glitch, an exploit that allows players to teleport enormous distances and reach areas of the game that they normally just wouldn’t be able to. A few boss bypasses here, a run through Crumbing Azul there, and anyone can reach the final boss by the time most players are reaching Stormveil Castle’s gates.

In less amusing Elden Ring news, players have taken to looking at Elden Ring with a critical eye, sharing their largest complaints over on Reddit. Easily the biggest is the pop-up message that informs players of keys being used, doors opening far away, or new items being picked up. Those messages really should just go away on their own, and the fact that the player has to press a button to acknowledge the message and make it go away often leads to dead Tarnished.