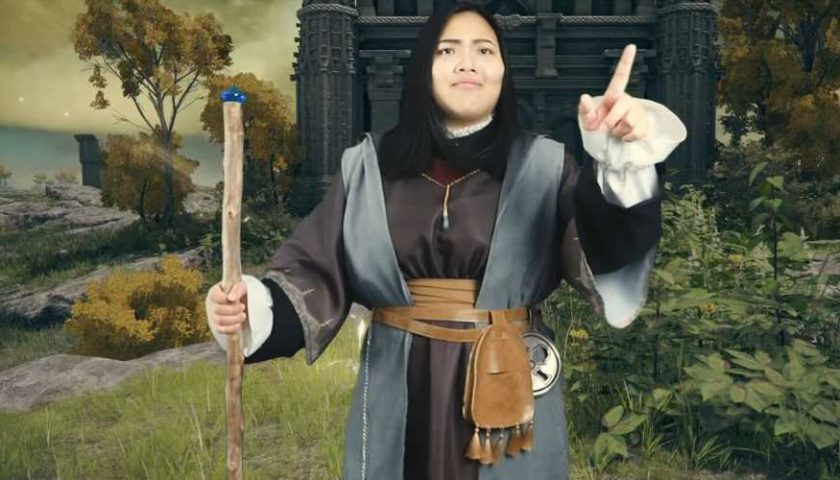 It's hard to recapture those first few moments of Elden Ring. The trepidation when taking those first few steps in the Chapel of Anticipation, the utter horror at being squashed by that first Grafted Scion, and the bewilderment of playing a game with absolutely no tutorial (at least, it didn't when it first released back in February–now there's a brief cave that teaches you the basics and gives you an emote). And then the awe at taking in all the sights and sounds in the Lands Between.

YouTuber Melaprilia captures that feeling perfectly in her new series, Melden Ring. She puts on an Astrologer costume (which was also my starting class), gets in front of a green screen, and recounts how it felt to experience the world of Elden Ring for the very first time.

Naturally, there's a lot of screaming in those first few moments. But after running away from the Grafted Scion, it's one "wow" after another after meeting her first Troll, her first dog, her first swarm of bats, and her first platoon of Godrick soldiers. And then dying to Flying Dragon Agheel, because absolutely none of us saw an epic fight against a dragon in our first few minutes of Elden Ring (and even fewer of us survived).

And like many of us, Mel expects Varre to be a lot more helpful than he turns out to be. Rather than pointing us in the right direction, he's a little troll that sends us on our merry way with nary a nod to the fact he so recently murdered our finger maiden (or at least, that's what's implied with all that maidenless talk).

The first episode leaves off on a cliffhanger, but we all know how many attempts it took to put down Margit the Fell Omen for the first time. Expect episode 2 to be a doozie.