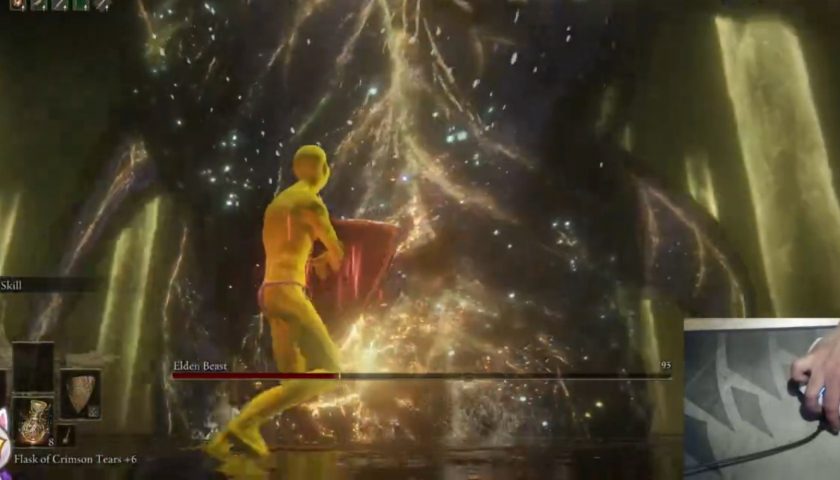 There are a lot of great shields in Elden Ring, from the humble buckler to the coveted Twinbird Kite Shield to the beloved Jellyfish Shield. But I'd contend the best shield in the Lands Between is the Brass Shield. It's the heaviest of the medium shields at 7 weight, but it offers 100 percent physical guard and an impressive 84 attack rating when used to bash heads with. It's also readily available throughout Elden Ring, frequently ripped from the clutches of a recently deceased guard.

This might be the key quality that made it the favorite tool of Twitch streamer Sivicks, who recently beat all of Elden Ring using just the Brass Shield and just one hand.

"There it is!" Sivicks shouted after finally defeating the Elden Beast after nearly seven hours of repeated attempts. "We did it!"

To add a little extra challenge to the run, Sivicks also completed the game at level one. This limited his stats so that he couldn't equip a weapon or even armor, fighting against the Elden Ring naked but for his two-handed Brass Shield. And while his character could use both hands in-game, Sivicks was only using one hand on a DualSense controller to guide his Tarnished to victory.

Sivicks said it took roughly 40 to 45 hours to beat the game in this challenge run, and after having done two previous Brass Shield-only runs, doing it one-handed wasn't really all that challening. "Honestly I wasn't putting myself through anything harder than a normal challenge at this point," Sivicks admitted. "I've got the bosses basically perfected, so after getting used to playing one-handed everything went pretty smoothly."

Multiple comments on Sivicks' Reddit post noted how seeing him beat the game with such difficult handicaps inspired them to challenge Elden Ring once more after being defeated by its many bosses. If Sivicks can beat the game one-handed with no weapons, then surely you can with both hands and a sword?

"It's such a good feeling knowing that, at the very least, these runs have helped people push through and succeed in their own playthroughs," he said.